There goes the neighbourhood

Residents of the quaint little riverside town of Amphawa are dismayed that a developer was given permission to erect a modern, four-storey hotel in their midst

'Take as many photos of this area as you want. What you can see today will soon be all gone," said Sunee Narongrit, a resident of Amphawa, as she gazed at a row of decades-old wooden houses facing onto the canal. 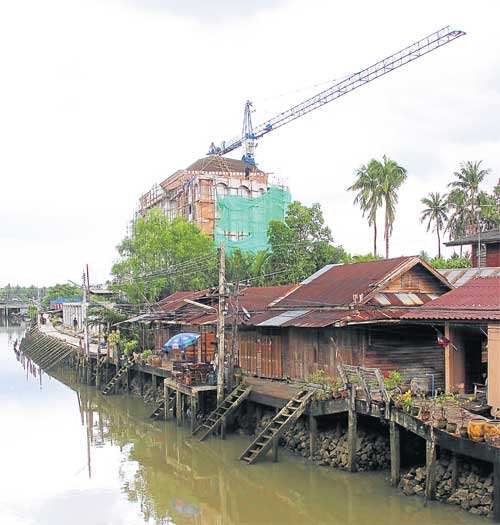 Although not yet finished, the Chuchai Buri Sri Amphawa already towers over a low-rise riverside community.

With their weathered folding doors, galvanised-tin roofs and other period features, the 11 houses are part of the unique appeal of this scenic little town in tiny Samut Songkhram province which never fails to charm visitors who come here to tour the famous floating market and savour a more sedate pace of life.

But the whole terrace is doomed, due to be torn down to pave way for a luxury, European-style hotel called Chuchai Buri Sri Amphawa.

A tenant for more than 30 years, Sunee was forced to move out of her home when the land, part of 7 rai in total, was sold to a tycoon from Bangkok.

The 56-year-old is now building a new house for herself several kilometres from her old neighbourhood.

While Sunee is upset at having to relocate, others are outraged that this 550 million baht project was given the go-ahead by local-government officials. A group of residents and conservationists have grumbled that the hotel's colossal size and Western architectural style will make it an alien intrusion in this very traditional setting which has won Unesco recognition.

Due to its prime location on the Mae Klong River, Amphawa was an important market town and commercial centre as far back as the 17th century, but the construction of a network of roads caused people to turn away from waterborne transport and the settlement faded into obscurity. It re-emerged as a tourist destination in recent years and over the past decade has attracted hordes of day-trippers, especially on weekends.

This tourism boom has given birth to thriving new businesses like cafes, T-shirt shops and souvenir stalls but has also created greater demand for accommodation in the area.

The new hotel, which is currently under construction, is far from being the first large development in this small riverside community. The difference is that big projects erected previously, including the Baan Tai Had and Baan Amphawa resorts and the Grace Amphawa, were built in a traditional Thai style or else were set back from the river and hidden behind a line of trees, so their operators have not come in for public criticism on the scale that Chuchai Buri Sri Amphawa seems to have stirred up.

But the mastermind of this grand scheme, Chuchai Chairittilert, a jewellery shop owner turned real-estate developer, is vigorous in defending his new project.

''I just want to give something back to society [by building the hotel],'' he insisted.

Inspired by a trip King Chulalongkorn once made to this part of the country, Chuchai explained that the structure has been designed to symbolise elements of Western civilisation the monarch adopted in the 19th century in his efforts to modernise Siam.

The developer said his hotel, which will include features like a gym, spa and wine bar, is intended to be a high-end destination targeting well-heeled tourists.

There are dozens of guesthouses in the area run by local people, Chuchai pointed out. ''Why would I take away their clients?'' 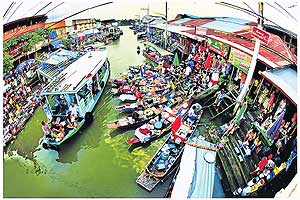 The market at Amphawa is always packed on weekends, but Chuchai Chairittilert is hoping to draw the well-heeled section of the crowd over to his new ‘landmark’ hotel.

His aim, he said, is to make the hotel a local ''landmark'' similar to the weekend floating market and Amphawa Chaipattananurak (a project initiated by the Chaipattana Foundation featuring exhibitions on local products and lifestyles).

Chuchai claimed that his hotel would boost the local economy by drawing in big spenders who would also patronise food and souvenir vendors in the locality.

In addition to his tall, extravagant-looking hotel, Chuchai also plans to construct a sort of plaza, what he calls a ''Faith Area and Love Monument'', as part of phase two of the construction. This he intends to be a pilgrimage site, a place, modelled on Ratchaprasong intersection in Bangkok, where people can come to pay their respects to various deities.

So Amphawa will be ''saleable'' every day of the week, he enthused, and not limited to catering to an influx of visitors on the weekends.

''My clients will be of the quality type, people with admiration for Unesco-recognised heritage rather than those attracted to red-light cities like Pattaya,'' Chuchai said.

Amphawa's canalside community was recognised for its conservation efforts and given an ''honourable mention'' back in 2008 in the Unesco Asia-Pacific Awards for Cultural Heritage Conservation. Chuchai claims not to have known of the Unesco listing when he bought the land to build his hotel.

Several conservationists have since disputed the businessman's projections as overblown.

''Who would want to see or stay in a concrete building next to the canal?'' asked Bundit Pradabsook, who holds a PhD in environmental science from Kasetsart University.

It is the traditional way of life of this riverside farming community which attracts tourists, both Thai and foreign, to Amphawa, he pointed out.

Tourists come to admire the small wooden houses built beside the river, the easy-going pace of life and what Bundit calls the ''aesthetic values of this old town''. Given its alien appearance, the new hotel could easily become an eye-sore rather than a landmark.

''Something which qualifies as 'visual pollution' doesn't always have to be ugly,'' Bundit reasoned.

''It can be very beautiful [in itself], but placed in the wrong context.''

Despite the controversy it has sparked, local authorities say they can't do anything about the Chuchai Buri project because its owner has not technically violated any laws, explained Roumsak Gumjhonkittikhun, director of the Public Works Division for Amphawa municipality, the jurisdiction which approved the blueprints for the project.

A jetty in front of the hotel site was designated for public use by the municipality earlier this year and a public path built alongside this section of Amphawa canal.

According to Roumsak, Chuchai followed the municipality's advice and adjusted his plans to allow for a 6m setback from the walkway, as is required by planning laws.

Roumsak also dismissed concerns that the hotel may end up exceeding the maximum height for structures in the municipality.

Approval was given for a four-storey structure and while this may not seem very tall to city dwellers familiar with skyscrapers, a four-storey building is positively intimidating to long-time Amphawa residents who are not used to anything higher than two storeys.

In small towns like Amphawa, the ubosot (ordination hall) of the local temple is usually the tallest structure in the locality. But the domed roof of the new hotel is now the first thing that a visitor will spy from afar.

''It would be totally fine if this project were in Thong Lor [Sukhumvit Soi 55],'' Bundit said, ''but its current location definitely depreciates the aesthetic value of this riverside community.''

In Bundit's opinion, the charge of ''landscape contamination'' should be substantial enough to stick, allowing residents affected by the project _ physically or mentally _ to file a lawsuit against the developer. He cited section 96 of the civil liability act which makes a person legally responsible for any leakage of contamination he/she causes.

''It sure disturbs your view, especially if you happen to be living across the canal from the hotel,'' he said.

Nor are concerns about the new hotel limited to the damage it could inflict on Amphawa's identity. Residents are also worried about a jump in the cost of living once the hotel opens.

Roumsak said the municipality has learned its lesson and will be more careful in the future before giving approval to construction projects of this size.

But rather than just complaining to each other, he said members of the community should be aware that they can take action against development projects that adversely affect their livelihood.

In response to a letter from this newspaper, Unesco's Bangkok office voiced concern over the adverse impact of property development in Amphawa which may undermine the town's heritage value. However, the office has no plans ''at the moment'' to withdraw or suspend Amphawa's honorable mention.

Computer graphic showing how the Chuchai Buri Sri Amphawa will look when complete.

BEING SENSITIVE TO ONE'S SURROUNDINGS

To build or not to build... is not the question. The real issue is what kind of development is appropriate in an historic area.

Once a sleepy old town becomes a tourist destination, more rental accommodation is needed to cater to the increasing number of visitors. But to preserve the original atmosphere of a place, it is essential that new real-estate developments blend in with the existing structures and environment.

While many academics, conservationists and affected residents think that drawing up and enforcing a land-use zoning map is key to protecting the character of an old town or city neighbourhood, Niramon Kulsrisombat, a lecturer at the Department of Urban and Regional Planning at Chulalongkorn University, disagrees.

Rattanakosin, one of the oldest parts of Bangkok, is a case in point, she says. Many years after being designated a conservation zone in the city plan, Niramon said, the face of this historic quarter has been altered drastically. Dozens of modern structures have been erected along Khao San Road and twin high-rises now dominate the skyline  just across the Chao Phraya River.

``If an old town has to be kept undeveloped, there wouldn't have been a single hotel built in Kyoto,'' she noted, referring to the ancient capital of Japan. But old Kyoto has been kept alive, she said, thanks to selective measures implemented via municipal ordinances.

An ``urban design guide'' should be introduced to complement existing controls on land use, Niramon said, adding that this would more allow for a much clearer definition of how a particular zone should be used and developed.

This guide should include a limitation on the maximum height of buildings. In an area designated for conservation, nothing should be allowed to exceed the height of the original structures. The skyline of a buffer zone around this conservation area could be raised a little higher, with very tall buildings restricted to areas beyond this buffer zone.

Original building facades in this old town or quarter should be kept unchanged, regardless of how modern the interiors are. When old structures are renovated or reconstructed, the original set-back line must be retained in order to maintain visual continuity.

The materials and colours used when restoring the exterior of a period building must also match the original architecture.

Signs advertising a commercial or other enterprise which are erected at the front of period buildings must also be designed to match their environment, in terms of colour and style. For example, in an old neighbourhood filled with wooden houses, any such signs should be made from wood and bear writing in a font that fits in with the period.