Kuay teow rua, or boat noodles, is a dish that reflects Thai cultural and geographical conditions. 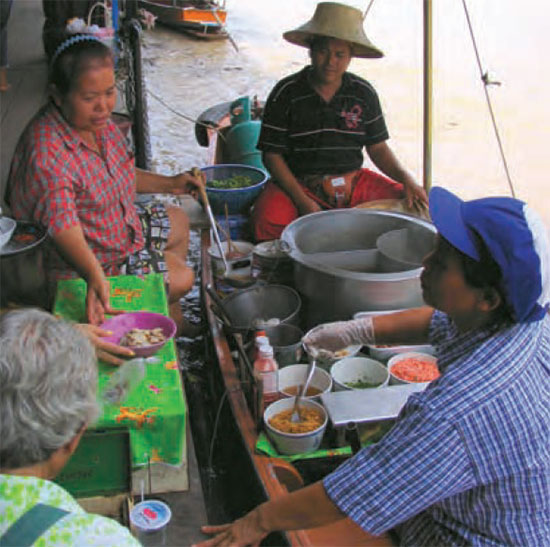 Noodle sellers on floating boats are now most commonly found at floating markets for tourists.

Although noodles come from China, boat noodles originated in Thailand, and are best known in the Rangsit area of Pathum Thani province, which has many canals.

The most famous boat noodle vendor of them all was Ko Hub, who was even mentioned in films. He worked from 1932 to 1951, and his reputation even prompted some boat noodle vendors to claim they were his children or grandchildren.

Rangsit boat noodles first emerged in the Rangsit Prayoonsak canal that was dug in 1890, during the reign of King Rama V.

The contractor hired Chinese workers to dig it. Consequently Chinese people settled there and happened to sell noodles from boats. That is the beginning of the famous Rangsit boat noodles.

Naturally, noodles are a hot food. Their soup must be boiled. Even soup-less noodles must be cooked in hot water. So it would be difficult for vendors in small boats to sell noodles in normal-sized bowls because they would have to keep plenty of soup and heavy bowls on board. 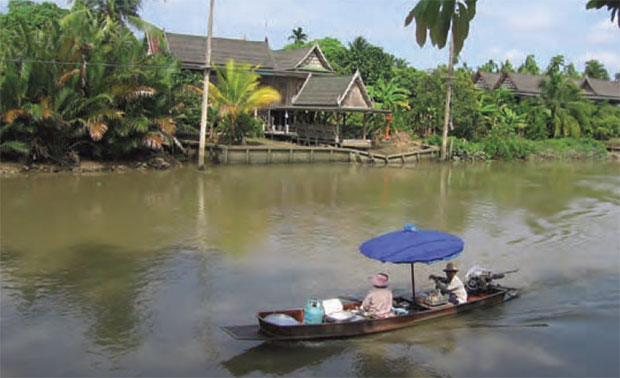 Therefore, boat noodles are served with a small quantity of liquid in small bowls so that vendors — who had to paddle, place their leg on the canal bank to keep their boats steady and use their hands to prepare noodles — could easily serve customers and receive back empty bowls.

Some people think small bowls are a tactic vendors employ so that each customer will order several bowls to satisfy their hunger, so paying more for a normal meal.

As boat noodles are served with limited soup, the soup must be fully flavoured to make the noodles tasty and impress consumers. So, the ingredients used to make kuay teow rua are unique.

Boat noodles were originally beef noodles, their soup flavoured with salted cows' blood. It is salted to prevent it from coagulating. The noodle soup also includes spices such as star anise and powdered cinnamon.

In the old days, boat noodles were popular in Bangkok and the surrounding areas because there were many canals with houses standing along them. These waterways were also the main transport routes in the past.

Over time, new buildings were built on waterways and more wastewater was discharged into canals. That regretfully killed the unique and culturally significant boat noodles of Thailand.

With the disappearance of canals and worsening water pollution, many boat noodle vendors decided to come ashore. Some even brought their boats into their noodle restaurants to create a genuine "boat noodle" atmosphere.

Kuay teow rua are now available in restaurants and malls.

These dry-land boat noodles may still serve their clients the unique taste of kuay teow rua, but the atmosphere of genuine boat noodles is definitely not the same.