Up from the deep
Life
Social & Lifestyle

Up from the deep

The discovery of a 1,000-year-old Arab-style ship in Samut Sakhon may give a clearer picture of life and trade during the Dvaravati period

Now buried several metres deep under the muddy ground in a former shrimp farm in Samut Sakhon province, a millennium-old ship once sailed many oceans of the world. The vessel, 25m long, had travelled from faraway lands to transport a variety of goods to cities on this part of the Earth before it sank here during the Dvaravati period (6th-11th centuries). 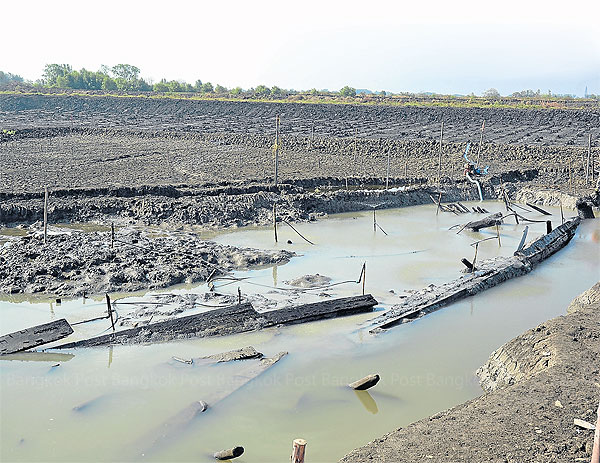 The Phanomsurin, named after the land owners, was unearthed in Samut Sakhon.

Now it’s a valuable archaeological find, since it is probably the oldest ship ever unearthed in Thailand.

“This ship is in the most complete condition I have ever seen. If it had had three sails intact, it would have been almost ready to sail again.” famous underwater archaeologist Erbprem Vatcharangkul noted.

It all began on Sept 16 last year when the Tambon Phanthai Norasingh Administration Organisation informed the 1st Regional Office of the Fine Arts Department in Ratchaburi of the discovery of an old ship underneath a shrimp farm owned by Surin and Phanom Sri-ngamdee. The site is located about 8km from the seashore.

“The excavation of this ship began in December last year and is still under way and is now about 10% completed. We sought co-operation from the underwater archaeology division,” the office’s archaeologist Preeyanuch Chumphrom, who has been working at this site, said.

Named Phanomsurin after the land owners, the ship was covered in muddy soil with one of its sides facing down. The bow and stern were lying south to north. Only its west gunwale was above the ground. Its wooden gunwales were enforced and stitched with rope, but both the wooden structure and ropes are rotten. Found in the middle section of the ship was a 17.65m-long rectangular wooden piece believed to be a part of the keel. A 17.37m-long wooden pole believed to be one of the ship’s masts was found on the west side.

“A special feature of this ship is its wooden components stitched with rope. Each of these ropes has a brown smaller rope inside to ensure durability. This ship looks similar to ancient Arab ships,” Preeyanuch said.

Many artefacts were discovered inside the ship. Most of them are earthenware and stoneware, both unglazed from domestic kilns and glazed from China, along with some other kinds from unknown places. The rest consists of coconut fruits, toddy palms, hundreds of betel nuts, rice, halved coconut shells, wood resin, a horn, fish bones, animal bones and plant seeds. The black ropes found in the ship are still in amazingly good condition.

“Some of the earthenware is extraordinary and had never been found anywhere in Thailand. They are oval-shaped containers with a pointed bottom. Comparison studies found they are similar to amphoras usually found in Europe, the Middle East and India,” Preeyanuch said.

The amphoras are coated with black resin on the inside, with thick brown stains. The archaeologists think that the resin was used to prevent leakage or was perhaps the goods itself. A fragment of one of the amphoras and that of a Chinese earthenware pot have ancient lettering inscribed on them, which are now being studied and translated.

In addition, several pieces of Chinese-style stoneware dating to the Tang Dynasty (8th-9th centuries) were found in the ship. One of them contained betel nuts. Several other kinds of earthenware were also found, such as Dvaravati-style pots with thick rims, which were probably used as kitchenware on the ship or destined for export.

The gunwales of this ship were stitched with ropes like those of ancient Arab ships. It is estimated that the ship dates to the 8th or 9th century and is crucial to the study of shipping in this region.

“The team is waiting for the results of undergoing scientific tests in the United States to find out whether this ship is as old as the 8th-9th centuries. During that time, trade between Dvaravati cities in the present-day Central Region of Thailand flourished and was linked to other Dvaravati cities in this region. This ship is probably an important piece of evidence to confirm these cities’ trade with Arab cities and China,” Preeyanuch said.

The team of archaeologists consulted Niran Chaimanee of the Department of Mineral Resources in an attempt to find out why the ship sank in this, area apparently on the way back to the sea. They believe this area might have been a canal or a shoreline amid a mangrove forest where seawater can reach. This waterway led to other Dvaravati cities and the nearest city was Nakhon Pathom, about 30km away. From Nakhon Pathom, boats could travel further to some other cities like Khu Bua.

Recently, a number of experts, local villagers, provincial and local authorities brainstormed at a meeting in Wat Wisuthiwarawas to find how to handle the find properly.

Erbprem, an underwater archaeologist, said that studies must be conducted on whether and how to lift the boat from the ground and how to maintain its condition. He gave an example of the way a museum in Ban Samet Ngam, Chanthaburi, keeps the ruins of centuries-old ships in
a pond covered with a building. However, leaving old ships in the water sometimes is not the best option and can increase the threat of decomposition.

A better alternative is probably retrieving ships from the water or sites, soaking them in special chemicals and keeping them in temperature-controlled rooms like those in Viking museums in Denmark and Norway, he suggested, recounting his visit to the Viking Ship Museum in Roskilde.

In his opinion, the best way for archaeologists to continue working at the site in Samut Sakhon is to build a dyke around the find, coat the rims of the dyke with water resistance chemicals and construct a building over the site. He gave an example of a wreck site in Australia where water was pumped out and a dyke was built in order to allow excavation teams to work.

Erbprem wants to see the participation of people in ship museum projects like the one in Ban Samet Ngam, where a number of villagers are local guides. Since World War II, a total of 65 sites with old ships have been found across Thailand.

Saneh Mahapol, the chief scientist for conservation under the Fine Arts Department’s Office of National Museums, said scientists must study the results of the previous cases abroad and find out how to preserve the ship and its cargo.

“An example is the conservation of a ship in Sweden by retrieving it from the sea and spending 17 years conserving it before displaying it. More than 400,000kg of anti-fungal and -bacterial was applied to protect the wooden structure,” he added.

Fine Arts Department director-general Anek Sihamart said the wreck site is an important place for everyone, even those with disabilities and little children, to study underwater archaeology because shipwreck sites in the sea are reachable by healthy people.

According to him, the department has so far allocated budgets totalling 3 million baht for excavating the site. The excavation is expected to last up to five years and the public sector will have to pay compensation to the land owners in order to acquire the site for work.

“More importantly, this ship is the first Dhow ever found in Thailand. The Dhow is an Arab ship made of wood stitched with ropes. In the past, it was widely said that the land called Suvarnabhumi flourished and was full of foreign ships, but we never really saw any ruins of those ships,”  he added. Although a similar ship was found at the Khuan Thani Ship Wreck Site in Kantang district, Trang province, it has yet to be excavated and studied.

“This ship contains a lot of artefacts, which tells much about the past, such as the way of life when people sold, bought and shipped betel nuts.

“They drank wine because amphoras were found. And they used earthenware from China and Europe. This reflects a combination of Asian and European culture,” Anek said. 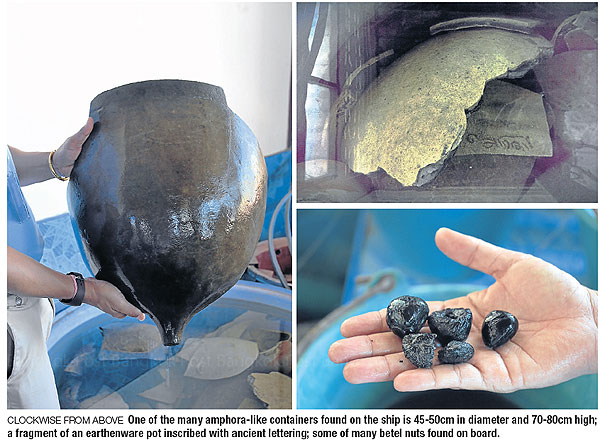 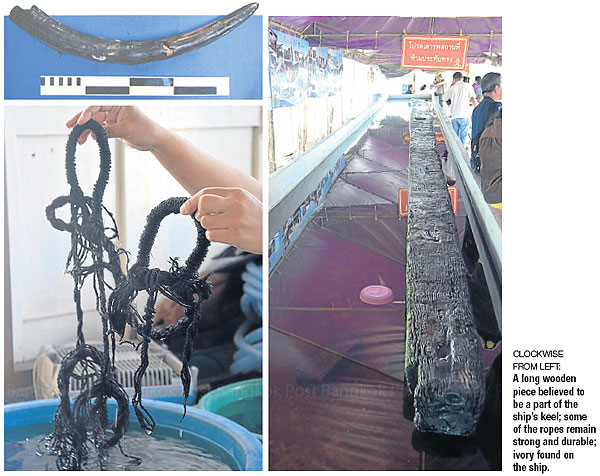