published : 12 May 2015 at 03:30
newspaper section: Life
writer: Duangphat Sitthipat
Pattakorn talks on the phone with a person at the scene of an accident. Photos by Narupon Hinshiranan

To mark International Nurses Day today and to continue our series on ordinary people often overlooked by society, Life experiences a night on the job with an emergency room nurse.

Pattanakorn Kantanakorn has been working as an emergency room nurse at Erawan Emergency Medical Services Centre for two years. During the day, she is a nurse anaesthetist at another hospital — a full-time job she started five years ago. One night, a motorcycle rider cracked his head open on the street near the hospital and she jumped on the hospital's ambulance to the scene. From that point, rescuing people whose lives hang by a thread became her passion.

"Rescuing people is exciting and challenging," said the 29-year-old emergency nurse, as she began her night shift at the Erawan Emergency Medical Services Centre. "There's nothing like the joy of saving someone's life."

The emergency centre runs three advanced ambulances of its own and stands as the state-liaised centre in charge of operating free Emergency Medical Services (EMS) under the Bangkok Metropolitan Administration through the emergency hotlines numbers 1669 and 1646. Its network encompasses 45 hospitals and eight foundations, including the famous Poh Teck Tung and Ruamkatanyu rescue foundations. 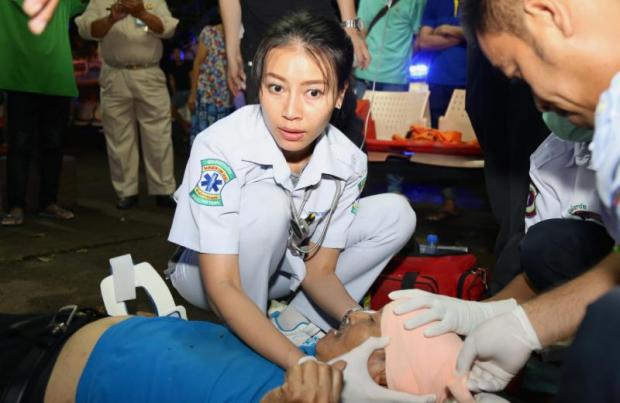 Once on the scene, Pattanakorn gets busy immediately.

Pattanakorn's shift began with going through the checklist of medical equipment on the ambulance that was replenished by the previous shift.

"I need to double check it because no mistakes can be made," Pattanakorn said.

Most EMRs and EMTs represent front line personnel at rescue foundations. AEMTs hold sway in provinces, while nurses remain the top crew in Bangkok and its outskirts.

There was no emergency yet, so Pattanakorn ordered food to eat with her assistants, Pairoj Saokaew and Manon Mheungthong. Both of them are certified EMTs. Manon is also a driver.

The team uses an old government building in Pracha Chuen to shelter themselves while waiting.

"The most certain thing about emergency cases is that I don't know when it will happen," Pattanakorn said "Some nights, there's nothing and some nights, more than five cases happen one after the other. I never know what lies ahead." 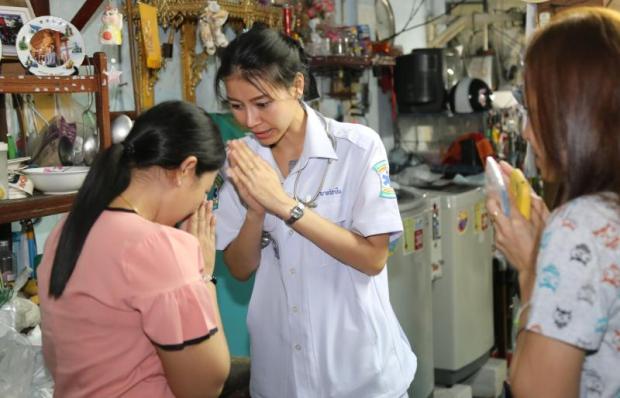 Pattanakorn greets the family of a patient she attended to.

Pattanakorn received a call from the centre. There was a man suspected to have slammed his head on the ground, and is unconscious near Samsen Railway Station.

Pattanakorn rushed into the ambulance and perched herself in the back seat. Three of them stayed close as the moving medical room is connected with the driver's room through a door. She held her mobile phone firmly.

"How is the patient doing?," she asked the person on the other end of the call.

For each case, Pattanakorn will receive the contact number of a person who makes the initial call to the hospital. While being whisked in the ambulance to the scene, she has to talk with that person to keep herself posted on the victim's condition, as well as offer her medical opinion.

"Do you know how to get there, Manon?" she asked the driver. "Are you sure we don't have to ask the centre to give us directions?"

The ambulance was now travelling at full speed, bypassing the paralysed evening traffic of the city with the unapologetic use of a blaring siren and constant honking. Other drivers on the road were understanding.

Once the centre receives an emergency call, the team at headquarters will assess the case and decide whom they should dispatch to assist the person based on severity and proximity.

Therefore, out of more than 160 advanced ambulances and 70 basic ambulances in the network manned by the Erawan Centre, when Pattanakorn is required, it means that she's the perfect candidate for the job.

According to Dr Petechpong Kumjornkijjakarn, director of the Erawan Centre, about 60% of emergency cases in Bangkok are covered by basic ambulances without the presence of nurses.

"Thailand doesn't run a single-tier emergency support system with the highest medical team for every case due to the lack of both financial resources and personnel," Dr Petechpong said. "We always have to spare the nurses in case of something more critical."

The ambulance arrives at the scene of the accident.

"Where is the patient?" Pattanakorn shouted to the gathered crowd as she jumped from the ambulance. The crowd guided her to where the patient was. It was an old man, lying on the ground with lots of blood under his head. He was still breathing.

Pattanakorn checked the wound on his head. Then she looked at his pupils, used a stethoscope to check his heartbeat, bandaged his wound and gave him IV fluids.

Manon and Pairoj let Pattanakorn perform all the tasks but also act as her assistants. EMTs are not allowed to provide treatments that "break the skin".

The patient was put onto a long spine board and moved into the ambulance. Pattanakorn connected the man with a patient monitor, gave him an oxygen mask and continued to keep an eye on him while the ambulance headed towards the nearest hospital. The man's wife kept asking whether her husband was still breathing and Pattanakorn calmly answered: "Yes, don't worry. We've got him now."

"It's surely distracting to be pestered by people while working because it's important to stay focused on a patient," Pattanakorn said. "But I need to put myself into the patient's relatives' shoes because I know no one is more nervous than them at the time."

The team delivered the man to doctors at the hospital. Pattakorn's job was done after she finished briefing the doctors on his condition and what treatment she had given him.

The team made its way back to base to stand by for the next case.

Sometimes, a new case can come immediately afterwards and they have to continue their journey.

"After we make it back to the ambulance from each case, we will be quite relaxed," Pattanakorn said. "It's really the opposite to when we anxiously rush to help a patient in the beginning. Now we can talk about something else. It could be something fun."

Back at the base, Pattanakorn went straight to clean the board smeared with blood. Then she got to work on writing up her report on the incident, from every procedure she performed on the patient to what time she started and finished doing each of the tasks.

Pattanakorn was summoned once again. It was a woman with diabetes who collapsed at her house.

This time, Pattanakorn was asked to pitch in along with the EMRs from another foundation, who were the first group to arrive at the scene. However, the patient turned out to be more critical.

The patient was being resuscitated when Pattanakorn got to the scene. She checked the patient's pulse and set her on an electrocardiogram to get a precise result before intubating her and setting her on IV fluids. Then she started giving her a series of adrenalin shots and defibrillated her.

Normally, if 30 minutes have passed and a patient has no heartbeat, there is unlikely to be a successful resuscitation. Pattanakorn tried for over an hour but the patient didn't make it back. Pattanakorn declared her dead.

"Whenever a patient dies, it's normal for me to feel pangs of regretfulness and sadness," Pattanakorn said.

"But as I always do my best and do it how it should be done medically, I'm okay afterwards."

Tired, she is finally able to go to sleep in the on-call rooms, which are a bunch of tables with mattresses underneath. Luckily, there was no other case that night.

Her graveyard shift now over, the last thing she did was go through the checklist of medical equipment she updated the night before. She then took a taxi to the hospital she works at, ready to start another life-saving job, only much less distressing.

"Being able to save someone's life is always a matter of great pride whether in the OR or outside of the hospital," Pattanakorn said. "You always end up not only saving a patient but also help his family and friends, as well. You save his loved ones from the cost of losing him."