Welcome to the Hotel Bangkok

Life checks in, and checks out some of Bangkok's most charmingly old-school lodgings

As a city that receives 25 million visitors a year, Bangkok abounds with hotels. The majority of them are new, gleaming and built according to the latest design trend — imposing structures with a lot of glass. Hidden in the shadows of modernity, however, are hotels that seem to be trapped in time, voluntarily or not. Wrestling with the changing decades and urban development, a number of hotels in Bangkok have maintained their quaint appeal and their existence today tells stories about Thailand's economic development, the Cold War era and the time when the city first began to receive mass tourism in the second half of the 20th century.

A tour of these hotels may interest both design and history enthusiasts, for they're a proud time capsule of the century past.

The hotel boom in the 60s and 70s saw construction of several buildings on Sukhumvit and they remain almost the same today as they did 50 years ago — blocky, post-war structures, darkened interiors, a swimming pool wrapped by building wings and a sense of not-quite-there sophistication. One of the major influences on architecture in Bangkok of that era was the US. Seeing Thailand as an alliance in the Cold War, the US poured in investment to boost the development of the country in an attempt to safeguard Thailand from communism. The Vietnam War also made Bangkok a hub for American servicemen. Design buffs often marvel at some of the hotels on Sukhumvit from that period that still stand today — Atlanta, Miami, Raja among others — as eccentric relics of that heady time. The Rex has just been closed and demolished. While on Rama IV, the legendary Malaysia Hotel is still going strong.

"Sukhumvit is geographically linked to Klong Toey port, which was the main transportation hub back in that time," says Supavit Thavaraputta, history lecturer at Thammasat University. "There is also a chance that Sukhumvit was the Bangkok frontier to head to Chon Buri when the US soldiers were going to U-tapao airport."

Miami Hotel, located at Sukhumvit 13, is one of the hotels that is still doing its business after half-a-century. 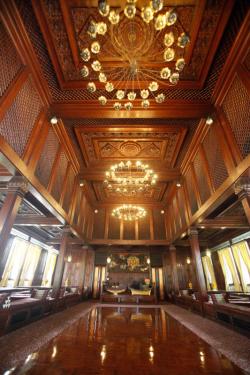 "The hotel was established in 1965 and was named Miami to present a warm welcome to American soldiers and make them feel at home," says Petcharee Sataponwatanakid, the hotel manager, adding that there are a few other hotels in Bangkok that are named after popular US cities.

For example, the Atlanta Hotel on Sukhumvit 2 is a handsome, old-school, well-preserved establishment with a distinctive 1950s design, chequered tile works and a cubist, elegant curvy staircase. On its website, it proudly proclaims that the hotel is "untouched by pop culture and postmodern primitivism".

According to Pirasri Povatong, an architecture lecturer at Chulalongkorn University, most of the hotels of that time followed the trend of international architecture, the style of which, however, varied.

"The architects working during that period were either Thai or foreign but most of them tried to merge a sense of Thainess in their work, although their level of cultural amalgamation was different," he said.

Designed by an American architect, the first Siam Intercontinental, for example, located where Siam Paragon stands today, was a low-rise building with a farmer's hat-shaped roof. Meanwhile, Manohra hotel on Surawong has a modern Western look, but with a Thai-style interior.

Miami Hotel was designed by a Thai architect who worked with a foreign consultant; the hotel stands out for its geometric structure with a retro decorative style. The outdoor swimming pool is surrounded by a 100-room U-shape building.

Besides the concentration of mid-size hotels Sukhumwit, Silom and Rama IV also house many old-fashioned hotels. The old-world warhorse Malaysia Hotel in Soi Ngam Duplee, established in 1966, has acquired near-legendary status and proudly stands among the upmarket Dusit Thani and Narai.  Sitthiporn Hanyanunt, the hotel's deputy manager says that back in the 60s, there were not that many hotels in Bangkok, so the Malaysia was one of the most famous in town. 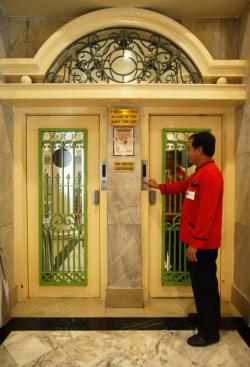 "The hotel was always booked by the Joint United States Military Advisory Group, or Jusmag, during the Vietnam War to accommodate American soldiers. After the war ended, they still came back to stay during their visit to Thailand," says Sitthiporn, adding that there are still traces of the American soldiers' presence, as the US embassy invested money on building fireproof doors on each floor to ensure the security of their troops.

During the fifth Asian Games in 1966 when Bangkok played host, the hotel was selected by the organisers to accommodate Malaysian athletes. That's how the hotel derived its unusual name.

In the 1960s, the extension of the city and the need to accommodate incoming visitors pushed the limits of architecture, according to lecturer Pirasri.

"Twenty-storey buildings started to show up during the period. Even though they were mostly built in a simple box shape, the 'brise soleil' [sunlight deflector] is what made these types of buildings unique," explains Pirasri. The 44-year-old Indra Regent Hotel was the first hotel that merged a mall, a theatre and a hotel within one building. The brise soleil of the Indra Regent Hotel building has become part of the hotel's identity. The triangle shaped sunshades covering the entire building has its own function in reducing heat.

Going back a little further, the Royal Rattanakosin Hotel, away from the "modern" neighbourhoods of Sukhumvit and Silom, is perhaps the last holdover old-school lodgings that has maintained its historic grace. Royal Rattanakosin was built back in 1942 on Ratchadamnoen Road, the heart of the capital in those days. Its art-deco facade was clearly influenced by the European style, but again, the cultural alloy is visible inside with the Thai-style decoration. 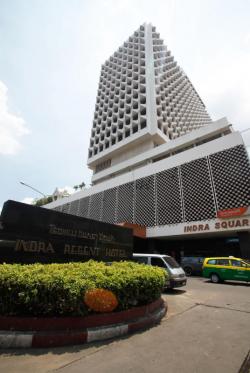 The brise soleil of the 44-year-old Indra Regent Hotel.

The curvy hotel hugging the road was built during the period of Khana Rassadon (Siam's first political party), who transformed Thailand from absolute to constitutional monarchy. For the revolutionaries, art and architecture was a crucial tool to support the new ideology of equality and stability. Many buildings from that period, therefore, have socialist elements and Rattanakosin Hotel is one of them.

"Our hotel always has something to do with politics and history," says Krich Chiraphirak, the hotel's treasurer. "From World War II and the Cold War, we always had a lot of soldiers staying with us. The place is also notorious as a shelter for political demonstrators as it is located near the popular protesting landmark of Democracy Monument. It has also been used as a first aid station during many political conflicts."

After a few years of being run by the Crown Property Bureau, the hotel was rented out to the private sector in 1970. Although some parts of the hotel were renovated over time, Krich added that most of the original structure remains intact.

It's hard to predict how long these hotels — from Sukhumvit to Silom and beyond — will withstand the force of new development. Most of them are still doing good business, but as the city keeps growing and the demand for more space means old structures keep being replaced by newer and less inspiring ones, their future cannot be guaranteed.

For an architecture scholar like Pirasri, the preservation of old things, however, is invaluable.

"Unlike some newly-built hotels that focus more on elegance but loses their own character, the old hotels are very distinctive. They give a sense of nostalgia. They preserve a lot of memories. These places keep time frozen and when you look at them, history can be unfolded." 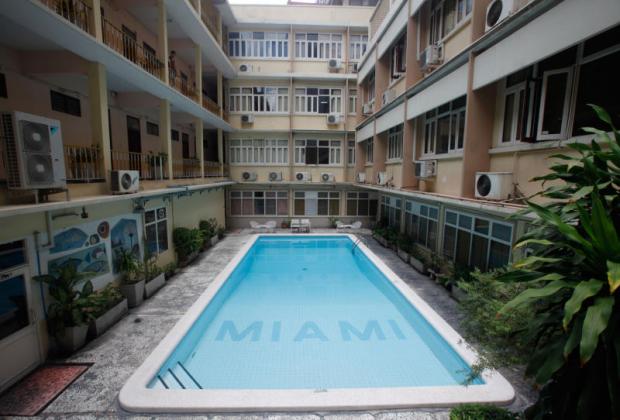 The Miami was established in 1965. 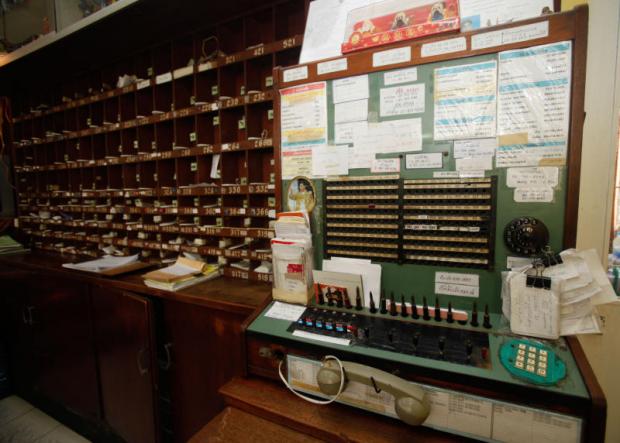 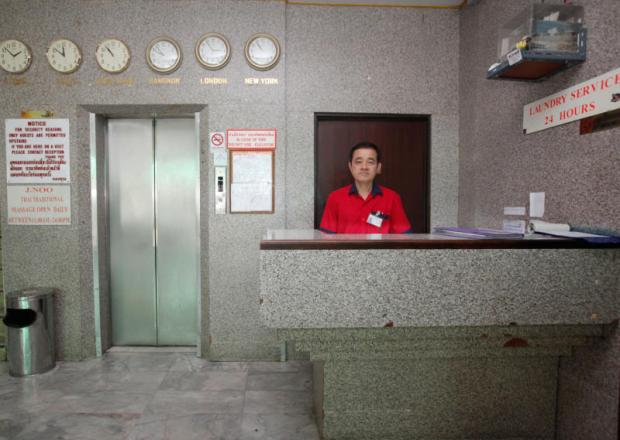 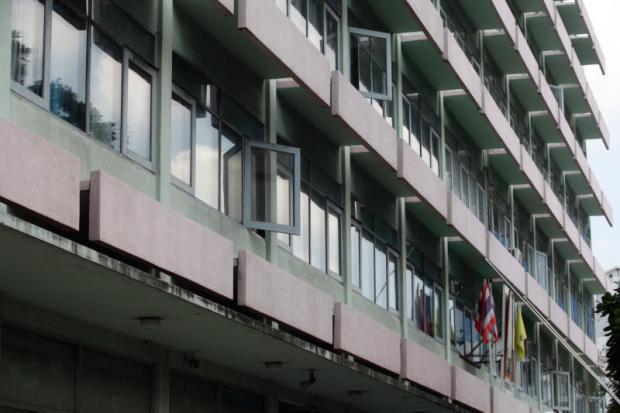