As a diplomat it's natural that he always tries to be discreet and constructive when engaging in all aspects of Thai society. Still, the 49-year-old UK Ambassador to Thailand Mark Kent is not afraid to speak his mind. 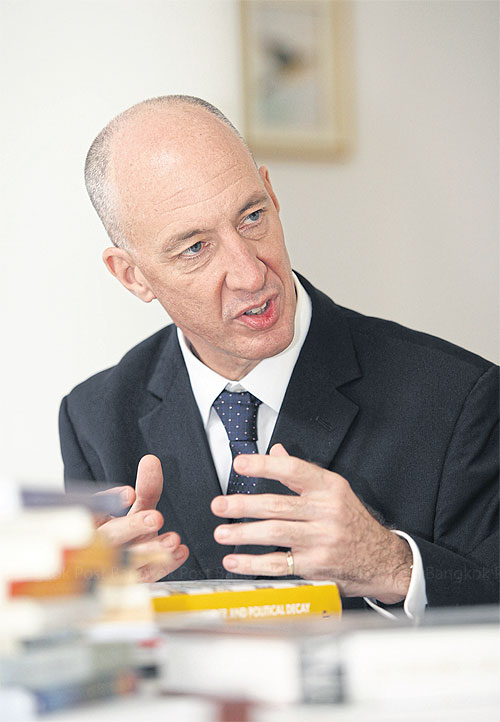 Kent is the 21st UK ambassador since 1947 (previously, British consuls were continuously sent to the Kingdom after the signing of the Anglo-Siamese Treaty in 1855), and after three years witnessing with a ringside seat the tumultuous political and social machinations here, he has a few remaining months left in the country. Some of his honest remarks, many times on social media, have been greeted with official dismay.

"All over the world British ambassadors are encouraged to write and people are free to agree and disagree [with them]," said Kent. "Neither my government nor myself has a role or part to play in the [national] reforms. But we're ready, if people are interested in our experiences, to help if requested."

Two weeks ago, the ruling Thai junta joined throngs of critics who felt they were offended by "the preaching of an outsider who happens to speak some Thai", referring to Kent's blog written on the International Democracy Day of Sept 15.

Kent was straightforward in the second paragraph of his article: "Following last year's military coup in Thailand, the UK and other members of the international community, including the UN secretary-general, called for the early restoration of democracy. That seems even further away now than it did then."

Actually, that was mild, and also a similar message repeated by the European Union Delegation in Thailand and human rights organisations as the Thai premier Gen Prayut Chan-o-cha was attending the 70th UN General Assembly in New York last weekend.

Chinese-speaking Brian Davidson, a UK diplomat based in China, will succeed Kent in the first half of 2016. Kent has language qualifications in Thai, Vietnamese, Spanish, Dutch, French and Portuguese. Vietnam was his first ambassadorial post. An Oxford law graduate and a masters graduate in European law and economics from Belgium, Kent, who only joined the Foreign Commonwealth Office 28 years ago, has yet to be told where his next post is.

"Sometimes, ambassadors hop from one place to another, some back to London, it depends on the government's and individual decisions," he said. Before he took up the Bangkok appointment in Aug 2012, Kent, who has two grown-up children, studied Thai at Chiang Mai University, Khon Kaen University and Chulalongkorn University.

"Some Thai speaking ambassadors like David Fall and Quinton Quayle used to base themselves in Bangkok before [being made ambassadors]. When and where possible, the Foreign Commonwealth Office will try to get a Thai-speaking ambassador, or arrange a period of time and resources [for an ambassador] to learn the local language," he said.

The workaholic ambassador took a longer time to study Thai than he did with the Vietnamese language and it paid off, because he has had the chance to use it more -- with businessmen and dignitaries, media and embassy staff as well as colleagues at King Prajadhipok's Institute, where last year he studied a nine-month course on politics and governance in democratic systems.

"In any conversation, it's not guaranteed, but probably I will understand Thai more than other foreigners. The language reflects different types of relationship. Thai language has more graduation -- so many words to mean 'I' or 'you', etc. If you understand the language, you will have access to overall culture," said Kent at an interview at his spacious Wireless Road residence.

Kent comes from a little village in the countryside, Tumby Woodside in Lincolnshire.

He was the first person in his family to attend university, and this underscores his strong belief in equal opportunities and rights. With a humble voice and gestures, Kent gives his comments in a straightforward manner and cherishes the democratic principles of equality and inclusiveness.

Since he has been in Thailand at this chaotic crossroads, Kent maintains that he did not feel offended when there was strong feedback about his work or comments.

"As an ambassador, you're responsible for undertaking relations in a constructive and fair manner. You have to listen to all points of view. It's my job to ensure Thailand and her people understand well the British government and for me to tell my government about Thailand -- the same as the Thai ambassador in London does," he said.

He doesn't believe there is a unique view in any society. "If you're doing your job properly, you must hear and meet wider points of view. And that is one of the messages we try to put across -- the more inclusive you are, the greater chance of success," he said.

"The great thing is you never get bored here. There's always things happening and we have such a variety of interests here. As I represent my Queen and my government, ultimate responsibility lies with me and there's never a single day that I don't ask myself 'Am I doing the right thing?'

"So how you do, how you see, you have to listen as much as you speak, not just only from surrounding people who say yes to you.

"And sometimes you have to say things people might not agree with but it's your government's policy, so you'll try to say it in a constructive way."

Kent is an ambassador who's very active on social media, especially on Twitter (@KentBKK has over 16,000 followers). And yet he acknowledges the pros and cons of the new technology.

"The difference between ambassadors now and the past is perhaps the technology that makes you a far more public figure. It's not always bad but it makes you not necessarily have time-off. I got a visa inquiry on Twitter at 10pm on Sunday!" he said laughing.

"Now my predecessor here, Asif Anwar Ahmad, who is currently ambassador to the Philippines, is also active on Twitter," said Kent, who said he was more active on Facebook back in Hanoi.

It's not all been politics and seriousness during his time here. Among his most memorable moments here include, "[going to the previous] James Bond film and watching the FA Cup with Thai fans, school prize giving -- seeing how well children do in language, and travelling throughout the country". You may also have seen him jogging in Lumphini Park, which is not far from the ambassador's residence.

As his posting is ending in a few months, Kent will keep working hard to fulfil his duties.

What would he like people to remember him by? "They should remember you by your work, right?," he said. "A good ambassador should not be noticed."

Looking at the piles of books that influenced and educated British Ambassador Mark Kent, you can understand why his remarks on politics and society, though always in a diplomatic and cautious tone, are straightforward and reflective.

Being fond of biographies from contemporary sports figures like Arsenal manager Arsene Wenger to businessmen like Dale Carnegie, the ambassador's intellectual acumen has been defined by social, political, cultural and historical studies.

"Richness and maturity of society comes from gradual learning and mutual agreement on rules," he said, and that has been the message he has communicated to his Thai audience over the past three years.

Which books would you recommend to Thai people in order to understand Britain?

At least three books. Magna Carta by David Starkey, The Diamond Queen by Andrew Marr and The Churchill Factor: How One Man Made History by London Mayor Boris Johnson.

Magna Carta is the cornerstone of the British political system that has existed over 800 years. The book explains where those political and legal cultures come from and how they have evolved.

[On The Diamond Queen] it's like you have to read HM the King's biography [such as King Bhumibol Adulyadej: A Life's Work]. The Queen's biography was published for the 60th year of her reign. She has been the centrepiece for the UK for so long. You'll understand all the links, how monarchy evolves in the UK and her part in the development of British society over 60 years. The Queen's important prime minister was also Churchill. They are the most significant figures in Britain. He's very British and also American [in style] as well.

Which books would you recommend to your successor in order for him to know more about Thais/Thailand?

Certainly, the book about HM the King — same as you should understand Queen Elizabeth.

The Last Siamese by Teddy Spha Palasthira. Teddy spent his childhood in the UK, so he helps us to understand both societies. I like him a lot.

Siam Mapped by Thongchai Winichakul is on the interesting concept of spatial awareness. Having a geographical borderline (between countries) is only a recent nationalistic invention. But it would be different feeling, when we look at it in terms of relationships rather than the reality of the different borders.

Consul In Paradise: Sixty-Nine Years In Siam by W.A.R Wood. He was one of the very first British consuls.

And of course, books by Chris Baker.

What is your all-time favourite book?

Diplomacy by Henry Kissinger published in 1994. It covers a combination of history and his own experiences in negotiations with China and Vietnam, etc. A very good analysis of history of diplomacy, i.e. balance of power in Europe, Middle East and beyond.

What is at your bedside now?

Francis Fukuyama's The Political Order And Political Decay. I tend to read non-fiction books before bed now. This book links well to the UK's Magna Carta anniversary which we celebrated early this year, but it's more contemporary, chronicling international political history over the last 150 years, how societies have developed political governance.

You're active on social media, so dead trees or e-books?

Yes, I use social media — I get news from Twitter, but I don't read a long book on a gadget. It's more psychologically reassuring to have a book and feel it.