A man demonstrates how to use a laserpointer walking stick developed by King Chulalongkorn Memorial Hospital. The stick helps people with Parkinson’s disease walk with greater ease and sure-footedness. (Photos by Sukhumaporn Laiyok)

Walking sticks have helped to advance mobility and independence for countless people with physical limitations. A home-grown innovation has brought such advancement to a whole new level, specifically for sufferers of Parkinson's disease (PD).

Sounding almost like a sci-fi creation, the laser-pointer walking sticks have been a new and safe "limb" for people with PD, who have had to endure a constant battle with the brain disorder that gradually robs them of muscle control.

The diligence of a team of researchers at King Chulalongkorn Memorial Hospital helped the sticks project get off the drawing board. 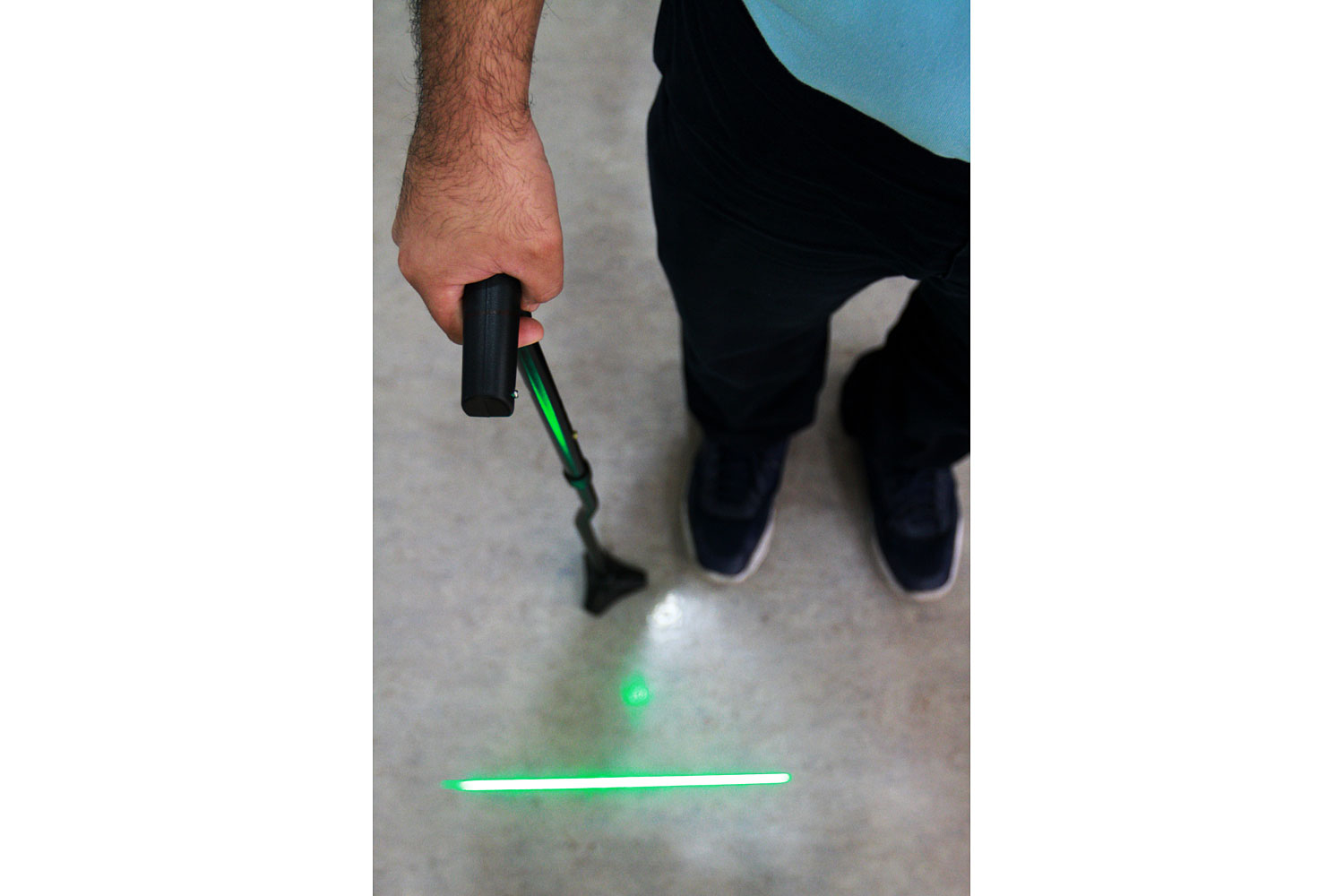 The walking sticks, guided by a laser beam, increase and sharpen visibility for users, thus reducing the risk of the person falling over caused by the freezing of gait, a common symptom of PD.

PD patients can walk with confidence, according to the team headed by Dr Roongroj Bhidayasiri, a professor of neurology.

Ten years ago, Bowon Panyamanee, 53, was rendered helpless after the disease severed a link between his brain and the muscles of his arms and legs.

"He suffers from the freezing of gait many times in a day and sometimes has a fall. I feel distressed being unable to do more to help him." 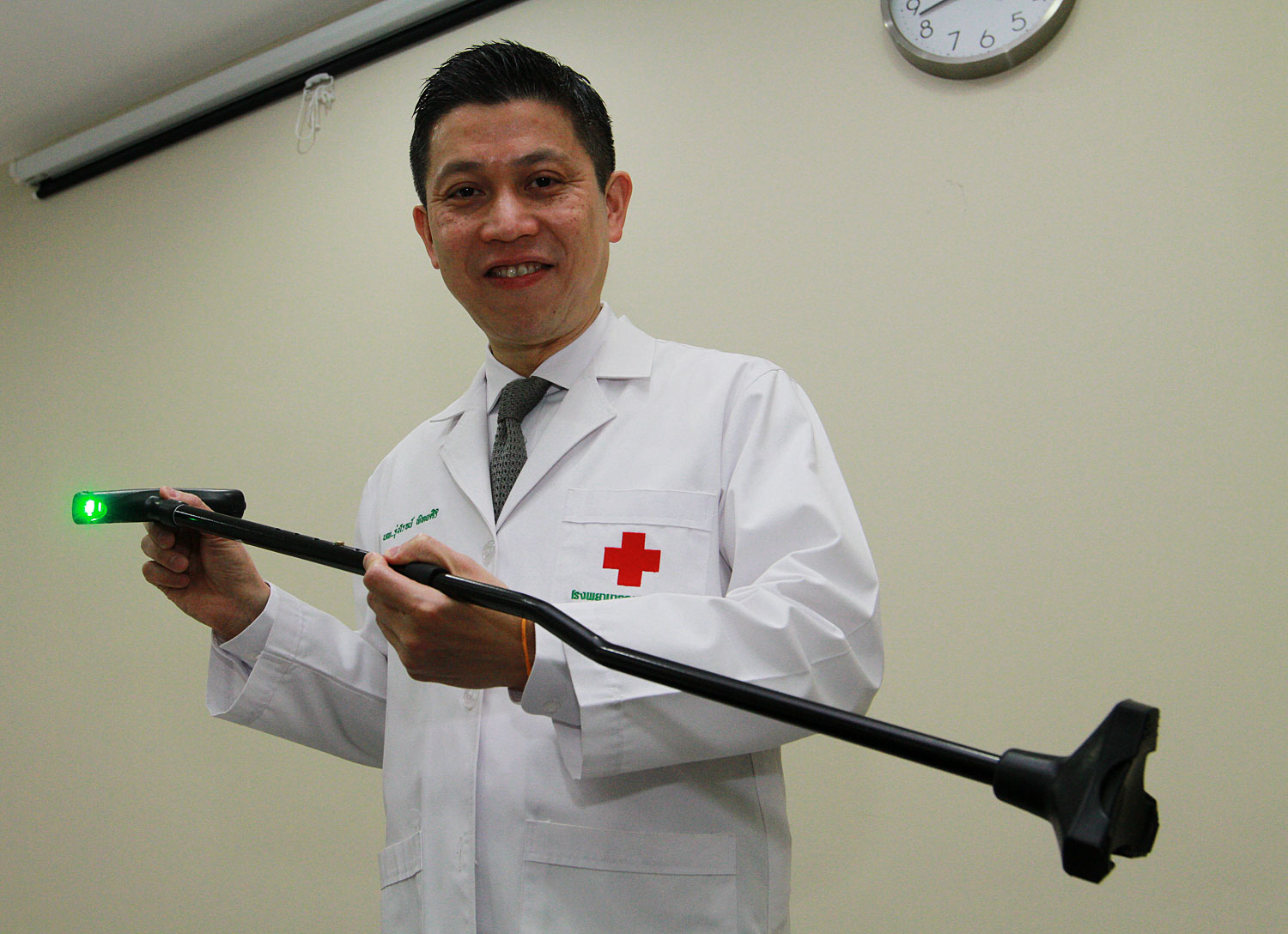 "We have improved the walking stick to make it friendlier to patients. We have made it simple and more functional." — Dr Roongroj Bhidayasiri, Professor of neurology

Mr Bowon has been treated for PD at the Chulalongkorn Centre of Excellence for Parkinson's Disease and Related Disorders. He was told by Dr Roongroj about a certain "smart walking stick" that could vastly improve his ability to walk and lift his quality of life.

Mr Bowon had no second thought about using the device, which has guided him to walk in a smooth and continuous motion.

"Being excited doesn't even begin to describe how my husband feels about using the stick and what it has done for him," Ms Ew said.

She said the open secret to the stick's success is in its basic, yet vital function. It projects a bright line of light across the path ahead.

The regained ability to walk unaided by a helper boosts his inner strength and personal pride.

"He is better at walking now and his confidence is growing," she said.

Since his diagnosis, he has longed for the day when he will be as mobile as before. With the laser-pointer stick, he manages to take a walk around the family's car repair shop and greet customers.

Ms Ew said the walking stick has also given her a much-needed respite. Taking care of a PD person can be stressful when they can't come to terms with their restricted mobility.

The stress multiplied when she and her children had to take over the car repair shop from Mr Bowon who learned the bad news about his PD 20 years ago. The early symptoms included stiffness in the arms and sleeping difficulties, which are still worsening.

"Before the diagnosis, my husband often complained about muscle tension," Ms Ew said. "We thought it came from his workload. He went for Thai traditional massage but it didn't help. 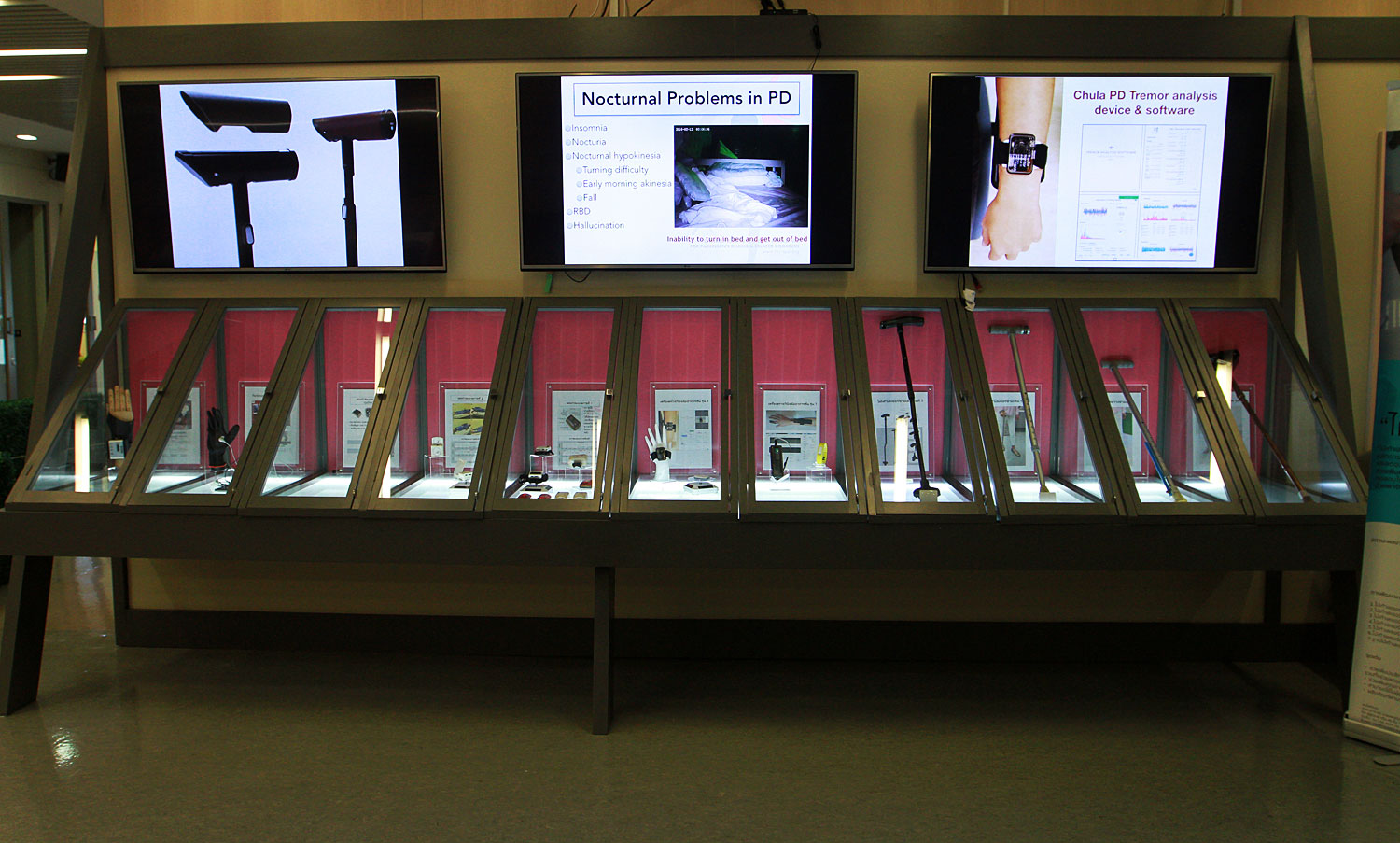 Dr Roongroj Bhidayasiri, a professor of neurology, displays the laser-pointer walking stick during an exhibition at the hospital.

"One day, I noticed that Bowon couldn't swing his left arm while walking. We realised something was very wrong. We decided to seek medical treatment.

"Following a series of tests, the news came that he had Parkinson's disease," Ms Ew said, admitting she had no idea what PD was at first.

Besides muscle stiffness, people with PD may exhibit tremors, constipation and a soft and low voice, according to Dr Roongroj.

"Each person experiences the disease in a different way. The tremors may not manifest for many years. For many, things go undetected before the onset of motor symptoms. People may suffer from sleeping disorders, depression and cognitive changes," the doctor said.

Parkinson's is a disease that affects not just the patients but their entire families, he said. Apart from medication regimes, the centre introduced the laser-guided walking stick in order to help restore their movements.

"The laser-based walking sticks we have developed offer sufferers a fair degree of independence and confidence. We hope to improve the quality of life for the families as well," said Dr Roongroj, who is a fellow of the Royal College of Physicians of London and board certified from the American Board of Psychiatry and Neurology.

The laser-pointer walking stick innovation was thought up in 2010 under a project supported by King Chulalongkorn Memorial Hospital and funded by the Thai Red Cross Society. The centre obtained a patent after applying for it two years ago.

Over the years, the centre has modified the device to accommodate a wider range of users and their walking characteristics. An upgraded version is expected to be launched this month.

"We have improved the instrument to make it friendlier to patients. We have made it simple and more functional," said Dr Roongroj.

A recent model of the stick, which weighs 300 grammes, features a slightly curved-out design to better prevent users from falling over. The previous model had a straight length of stick.

The device's height can be adjusted and the stick is fitted with a rubber tip on the bottom for better grip of the ground.

The laser beams out from the underside of the handle showing a straight green light on the ground. The light lets the users know if the path ahead is uneven.

Dr Roongroj said Parkinson's disease happens when nerve cells in the brain do not produce enough of a chemical called dopamine that is responsible for coordinating movement.

"In this case, when patients feel the weakness in their limbs, the problem is in the brain, not in the muscles," the doctor said.

There is currently no cure for Parkinson's. Drug treatments can stabilise the level of dopamine to relieve or control the symptoms.

In some cases, a surgical procedure called deep brain stimulation may be performed to help lesson motor symptoms and decrease medication needs, he said.

Dr Roongroj said the disease is more common in males than females. About 8% to 10% of people with the disease who start experiencing the symptoms are under 40. This is called young onset PD.

"Young onset of Parkinson's disease is more likely to be genetic than older onset. If you have a family member with PD, the person should undergo genetic testing," Dr Roongroj said.

In Thailand, Parkinson's disease strikes about one in every 1,000 persons with those aged 80 and older at higher risk of getting the disease.