It has been said that the secret to growing the right fruit rests with sowing the right seeds. This belief has galvanised a woman's quest for food security, which in turn has given birth to a unique movement.

In the 1800s, less than 5% of the world's population lived in urban areas. According to the United Nations, that figure is expected to reach 65% within the next 10 years.

As people move into cities and towns, their eating habits change dramatically. Increasing urbanisation has seen more and more city residents turn away from cooking their own meals and purchasing takeaway food.

Home-cooked meals, once the primary source of clean and nutritious food for most people, are losing out to ready-made dishes.

In the pursuit of convenience, the world has turned to refined starches, sugar and salt to process meat and other animal-based products into food. In urban areas, consumers are relying more and more on a network of supermarkets, street vendors and fast food outlets. 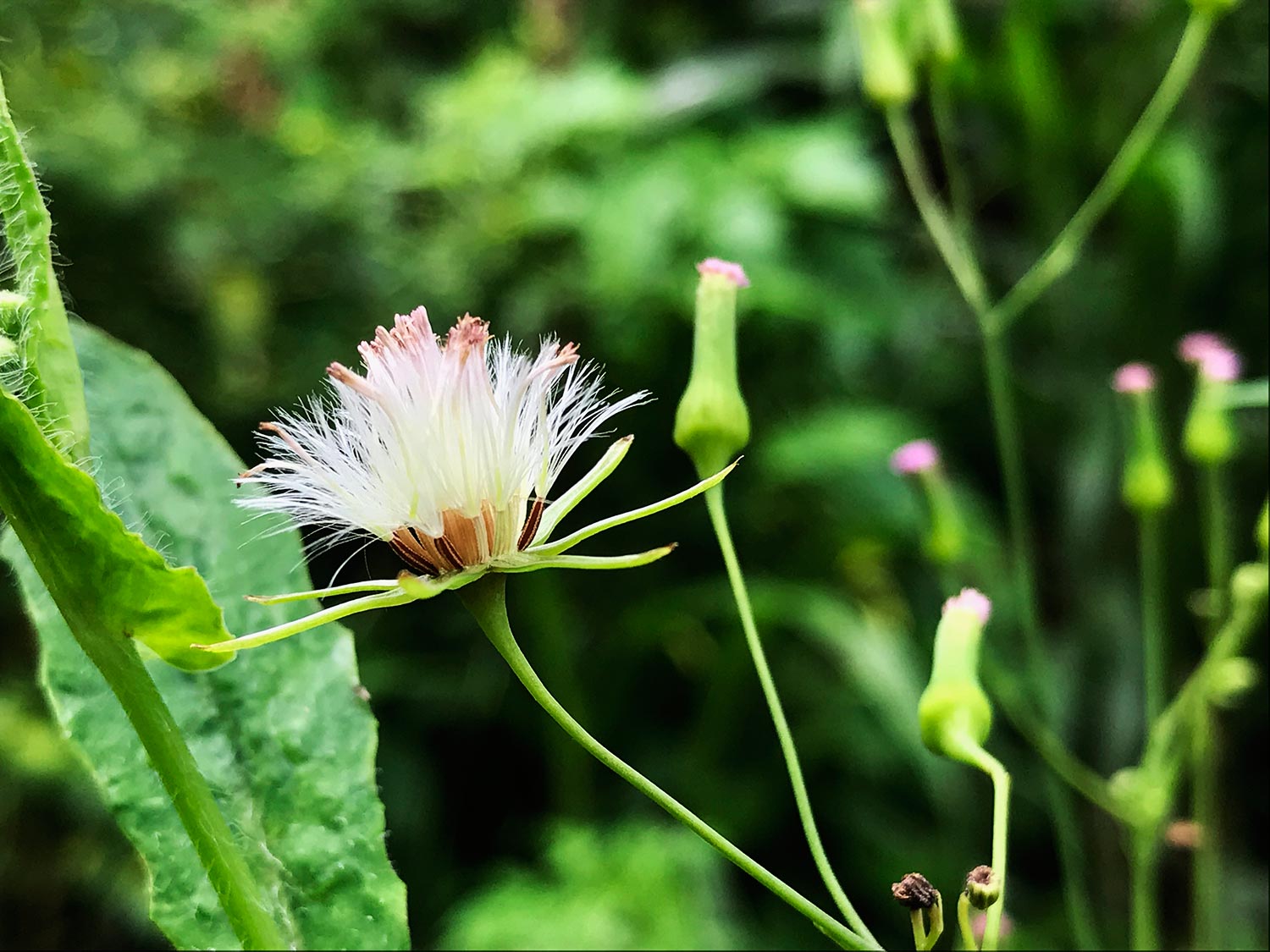 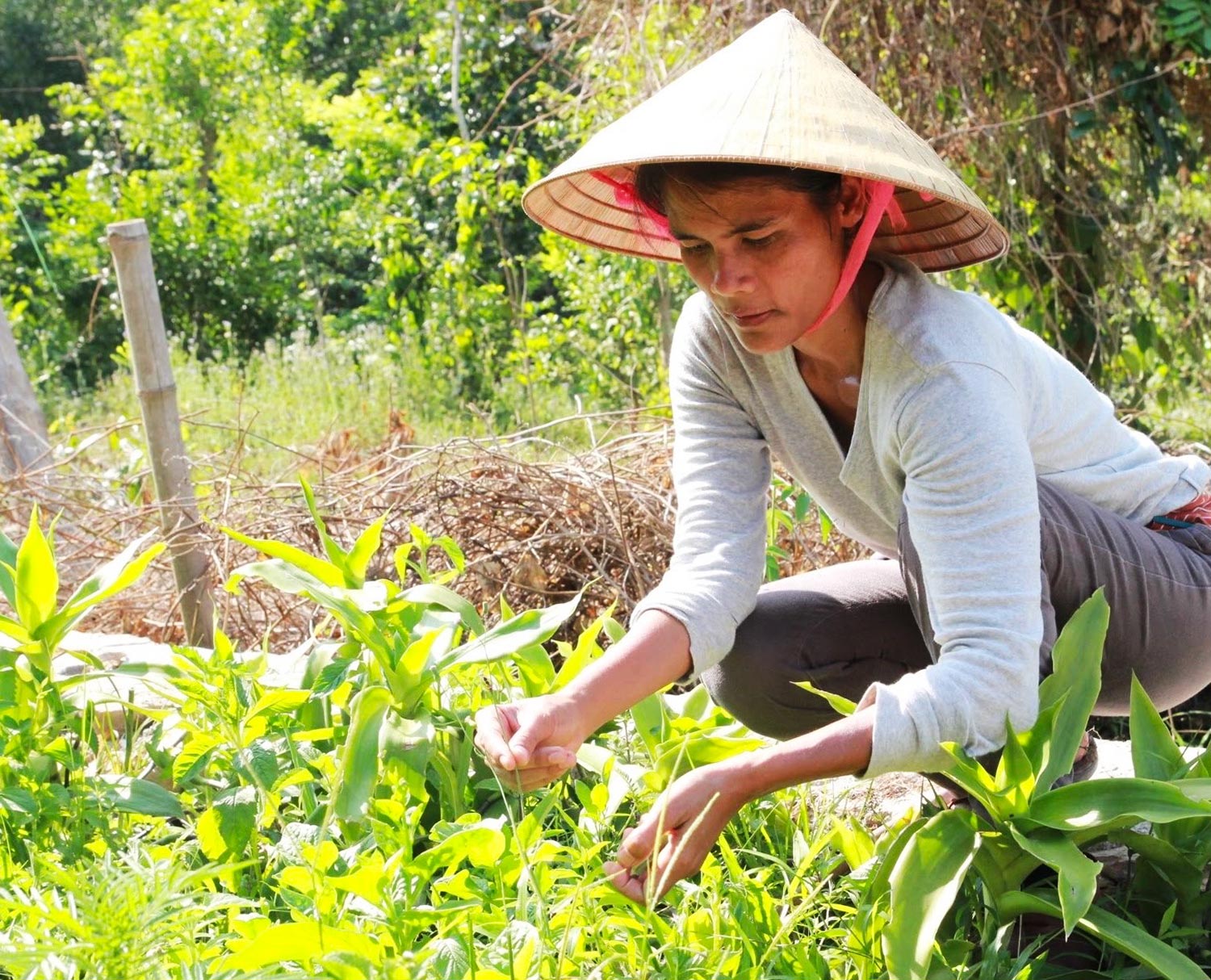 Dietary choices and sedentary lifestyles have pushed obesity to epidemic proportions not only in developed countries, but in low-income countries too, where hunger and obesity co-exist. Poor diets are now a leading cause of illness, linked to one fifth of all deaths worldwide, according to the UN.

Pavinee Chaipark was one of millions of Thais to move from the provinces to work in Bangkok. She worked long hours, slept irregularly, ate poorly and drank alcohol. One day, she felt lumps near her breast. Doctors said she had cancer.

The tumours were malignant and surgery was needed. However, Ms Pavinee refused Western-style medical treatment and opted instead to return to her home district of Chana in the southern province of Songkhla where she returned to a healthy diet and lifestyle.

She now grows backyard vegetables and encourages her community to follow suit.

"I believe in natural farming and food safety. Eating and living well will eventually bring good health," she said.

Arriving back in her hometown six years ago, the 38-year-old former NGO-turned freelance farmer started making a list of the indigenous herbs, vegetables and fruits she planned to grow on her parents' land plot.

To her surprise, Ms Pavinee found that many familiar plants, such as eggplant, turkey berry, bitter cucumber, moringa and okra, red basil and centella, hold vast medicinal and antioxidant properties.

Although many households in the South typically grow the herbs in their backyards, the plants often fall into neglect. Only elderly people know how to cook food using the herbs but often cannot pick them all at once.

Also, there are not many vendors selling indigenous, home-grown herbs and greens. Hence people end up buying common, chemically fertilised fruits and vegetables such as kale and cabbage which are mass-produced and readily available at the markets. 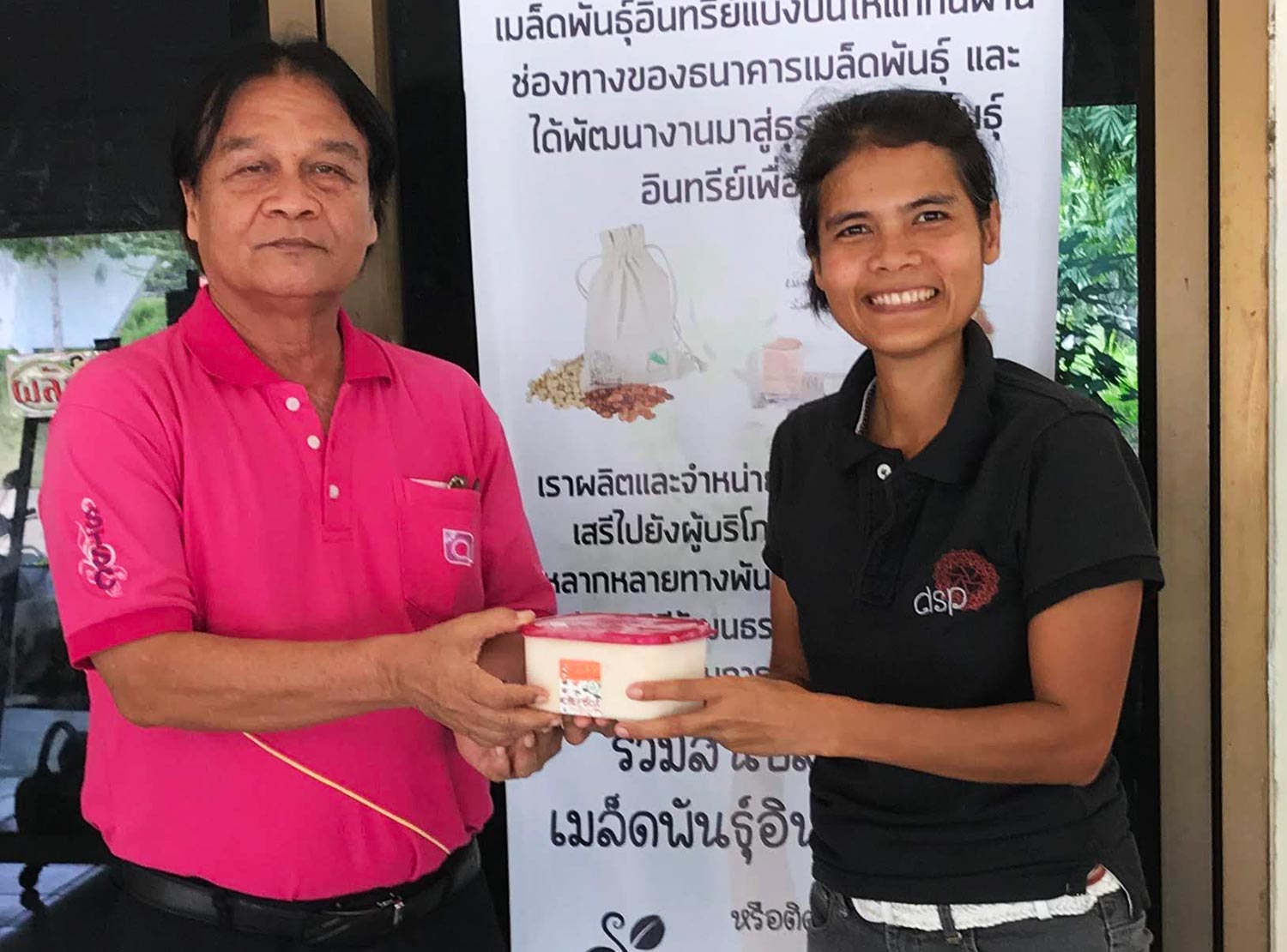 Ms Pavinee registers the seed bank as a social enterprise.

"It is an unfortunate that highly beneficial local herbs and vegetables have been taken for granted for too long," Ms Pavinee said.

She said people should do more to spread the word about good health and to raise awareness about organic foods.

Supplies of organically grown produce can be sustained through the efforts of the people on the streets. They can take the matter into their own hands once they put their green fingers to good use.

After garden vegetables and fruits have been grown by the householders through five to seven cycles, they begin to yield healthy seeds which can be collected for planting the next crops.

Ms Pavinee said people should not let a single conglomerate monopolise the sales of crop seeds. And because they produced only some varieties of seeds, biodiversity was being lost, she added. 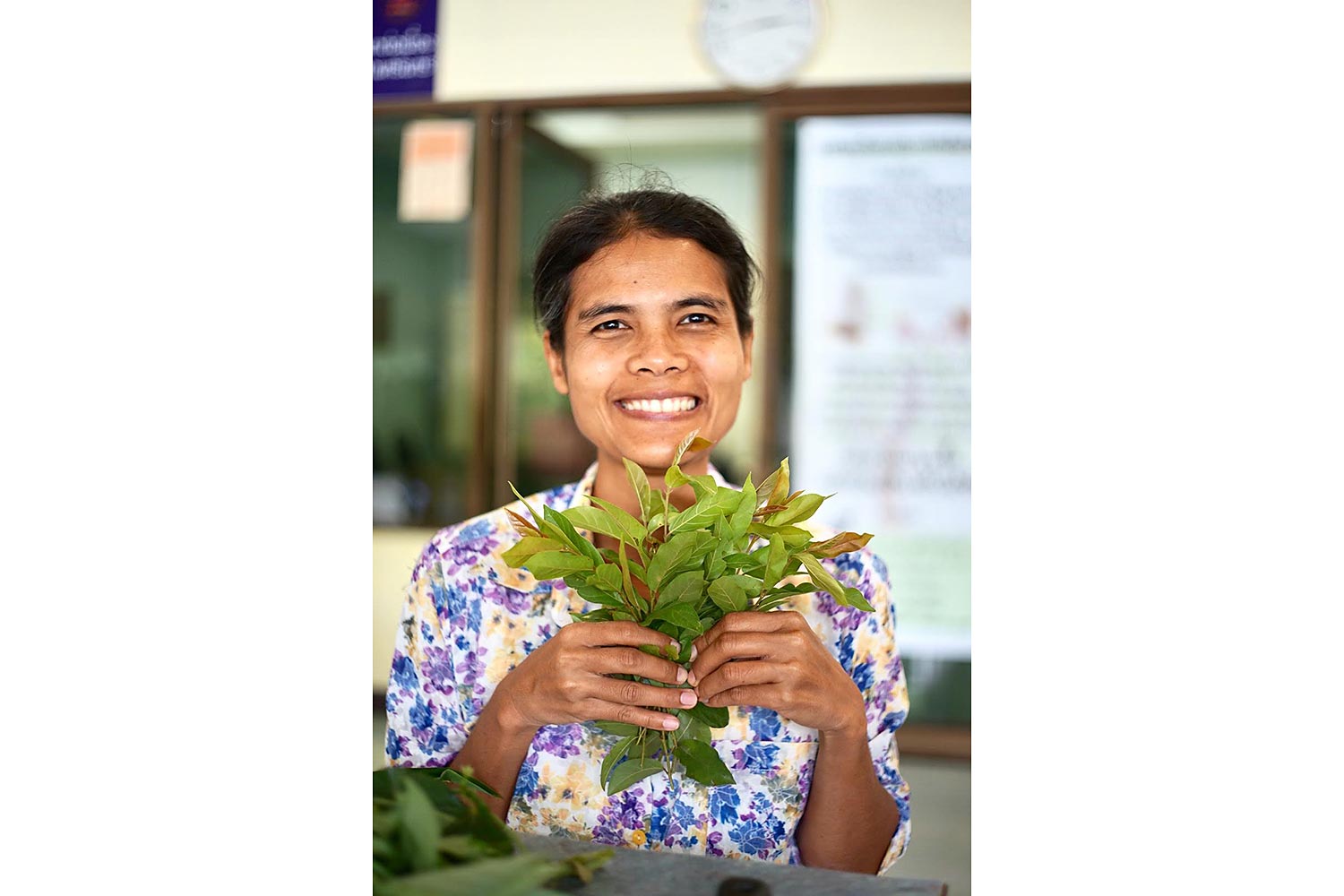 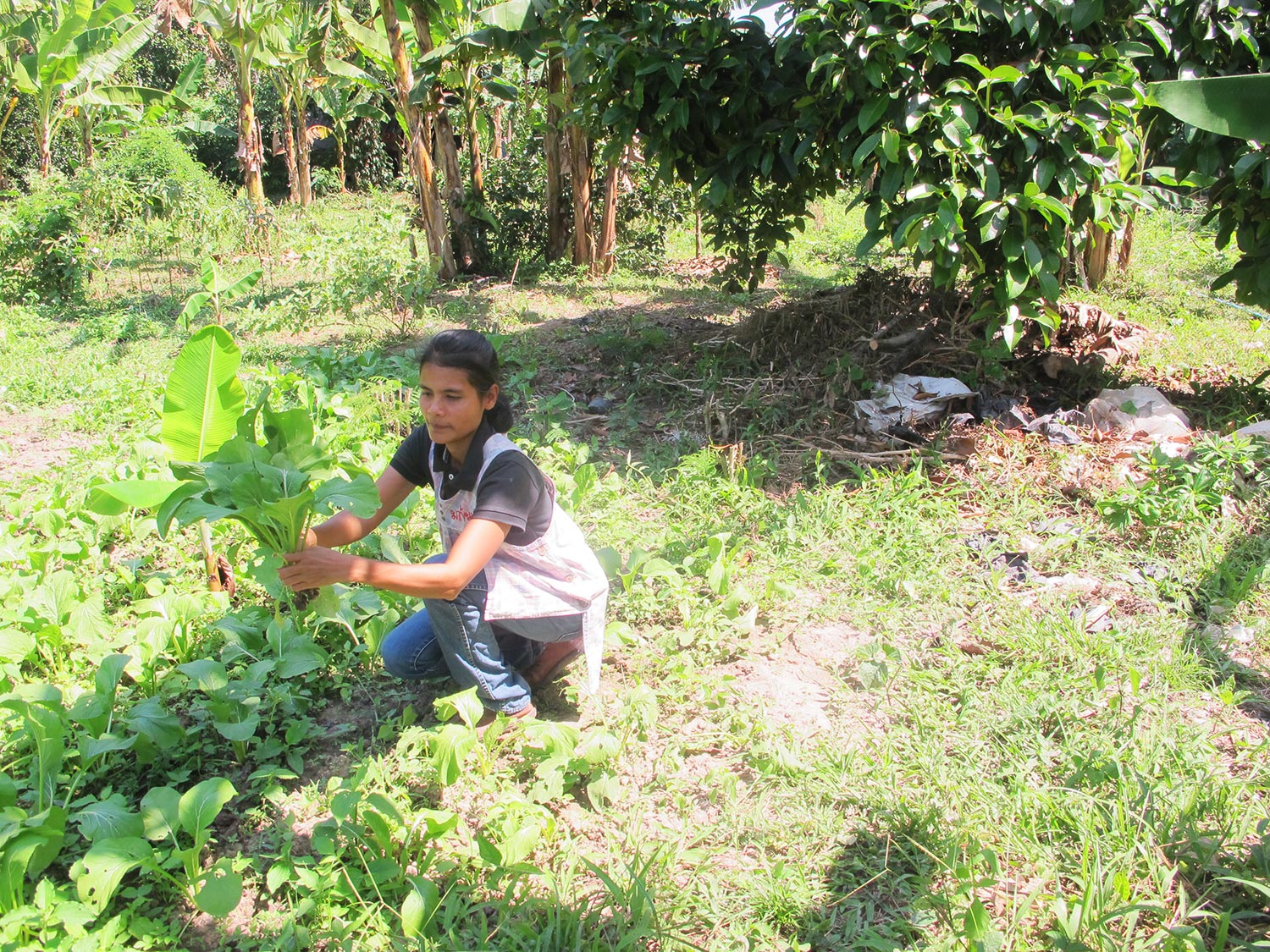 Her mother also sells home-grown fruits and vegetables including bananas, coconuts, durians, pineapples and basil leaves at a local flea market. Ms Pavinee seizes the chance in showing customers what the naturally planted produce can do to improve their health.

Street markets are a central point where fresh ingredients are distributed to consumers and it is here where vendors can tell their customers how backyard vegetables and fruits are grown and why they should choose them over common produce which potentially carries the residue of harmful chemicals.

Mr Pavinee accompanied her mother to the community flea market and helped to sell the produce.

"Another plus side is if the produce is left unsold, I can trade them off for meat, fish and eggs with other vendors," she said.

Ms Pavinee understands it is not enough to raise awareness about natural farming and reintroduce indigenous plants. She attended several courses and workshops arranged by agricultural networks nationwide and came away armed with knowledge about the importance of establishing a seed bank.

"Keeping the seeds collected from the gardens within households for regeneration is crucial for food security, biodiversity -- and our own horticultural identity," she said.

She explained that the commercial sale of seeds by giant corporations comes with strings attached. Customers, mostly small-scale farmers, are pushed into buying expensive pesticides and fertilisers as well. This plunges the farmers into debt and when prices of crops drop because the farmers cannot compete with produce from larger, commercial farms, they fall into even deeper debt. 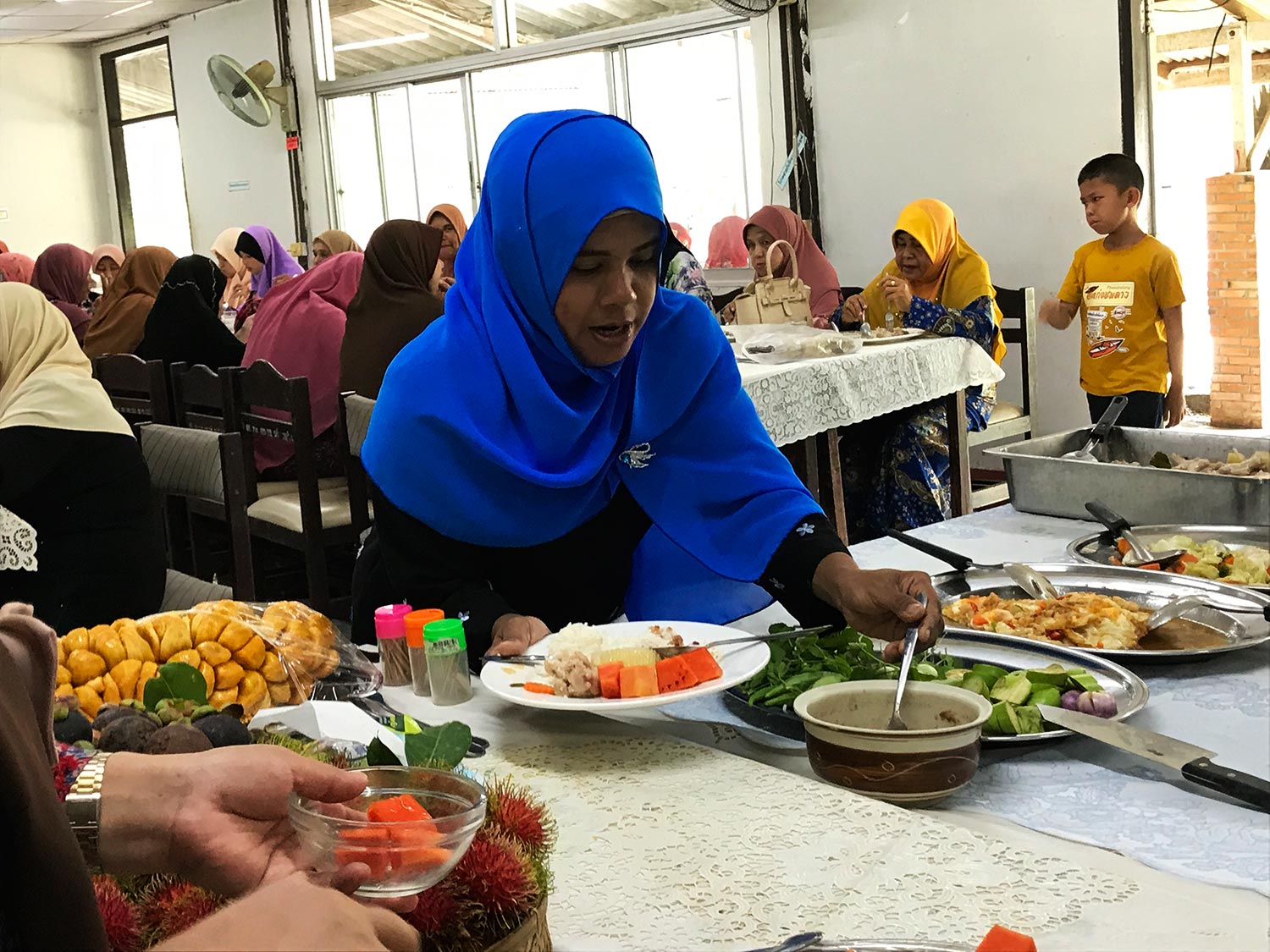 The 42-year-old former NGO member-turned-farmer has also picked seeds of edible plants from the wild. It wasn't a success at first but Ms Pavinee persevered and now she has managed to put together a seed bank of traditional and commercial vegetables as well as medicinal herbal plants.

Ms Pavinee started out collecting seeds of local eggplant and lettuce. A single eggplant can contain up to 1,200 seeds which are separated into those best kept in moist conditions and ones which can be dried and stored for years.

In the past five years, Ms Pavinee has managed the seed bank. The seeds are shared with community residents and organic farmers nationwide.

Today, the network has expanded to include 300 members whom she calls "active consumers" and extended over the borders to Cambodia, Laos and Vietnam. The members both in and outside of Thailand communicate and exchange ideas and experiences through social media.

Ms Pavinee said a restaurant called Ma Kan Na (Come On) in Songkhla's Thepha district is buying fresh, naturally grown produce from the network, which are then used to rustle up traditional dishes. The income from the sale supports the cashflow needs of the seed bank.

As a younger generation farmer, Ms Pavinee also harnesses the power of online marketing in selling and distributing the seeds.

Her network also grows the traditional strain of the organic luk pla rice to be supplied to hospitals so patients can enjoy a healthy diet.

The network is seeking certification under Participatory Guarantee Systems (PGS), an internationally applicable organic quality assurance system. Established by IFOAM Organic International, the PGS initiatives serve thousands of small organic farmers and their consumers all over the world as an alternative and complementary tool to third-party certification within the organic sector and advocates for the recognition of PGS by governments.

Through her work, Ms Pavinee has earned "model farmer" recognition from the Food and Agriculture Organisation of the United Nations.

Seven years after her cancer diagnosis, Ms Pavinee is still holding up. Speaking of her tumours, she said: "As long as I can eat and live healthy and natural, we can live together."

Seven more soldiers are among the 14 new Covid-19 cases detected in arrivals from South Sudan, India, Hong Kong and Turkey.

Trump, Biden head into first debate with presidency on the line

CLEVELAND: There'll be no handshake, but venom to spare when President Donald Trump and challenger Joe Biden meet in Cleveland on Tuesday for the first of three televised debates that could shake up an already volatile race for the White House.

Rio Tinto hit with human rights claims over Bougainville mine

SYDNEY: Rio Tinto is facing accusations it "side-stepped" responsibility to clean up poisonous waste from a closed mine on Papua New Guinea's Bougainville island in a complaint filed Tuesday in Australia.