Hundreds rally for justice at Thammasat

Participants light candles during a pro-democracy rally at the Tha Prachan campus of Thammasat University on Saturday evening. (Aekarach Sattaburuth)

Hundreds of people gathered at the Tha Prachan campus of Thammasat University on Saturday evening to demand a return of justice in the country following the dissolution of the Future Forward Party.

The call went out earlier in the day via a message posted on the Facebook page of the Student Union of Thailand, inviting people to join a “flash mob” starting at 5.30 pm.

Organisers prepared two large blank banners for people to write on to express their feelings. In less than 30 minutes, the banners were filled with messages expressing discontent with the government led by Gen Prayut Chan-o-cha and what they perceive as injustice in society.

The gathering came just a day after the Constitutional Court dissolved the Future Forward Party over an “irregular” loan. The anti-establishment party won 6.3 million votes in the last election and was highly popular with young voters. Its banned leaders have vowed to continue their campaign outside Parliament for the reforms that Future Forward espouses.

As plainclothes police looked on, students took turns on stage to decry the failure of the government, injustice, curbs on freedom, the sluggish economy and efforts by the former military junta to prolong its grip on power.

All of them said the disagreed with the charter court’s ruling and said they felt independent organisations had bowed to dictatorship.

“It doesn’t matter who the people elect — Thai Rak Thai, People Power Party or Future Forward — they all ended up being disbanded. Maybe we should try electing Palang Pracharath so it too is dissolved,” a speaker said, referring to the main party in the governing coalition.

The participants subsequently shouted: “Prayut out!” and “Down with dictatorship. Long Live Democracy”.

The latter were the last words of Krong Jandawong, a teacher and Seri Thai activist from Sakhon Nakhon province, before facing a firing squad ordered by Field Marshal Sarit Thanarat in 1961.

Ater that, the students read poems encouraging people to fight on until power truly belongs to them.

Later, candles were lit and they sang the songs For the Masses and Saeng Dao Hang Sattha by Jit Pumisak, a young leftist scholar who was killed in 1966.

The participants cleared the area and collected garbage before dispersing at around 6.30pm.

Parallel activities were also held by Student Union of Thailand affiliates in several provinces including Chiang Mai, Phitsanulok and Pattani. Some asked people to wear black and carry #SAVEDEMOCRACY posters. Others gathered to read statements and listen to pro-democracy music.

On Friday, the student union issued a statement strongly condemning the dissolution of Future Forward.

“The disbandment lacks legitimacy both in terms of content and process ... so much so that it can hardly be called a justice process,” it said.

It also noted that the dissolution took place just three days before a no-confidence debate, thus undermining checks and balances in Parliament.

The ruling date was also “suspiciously” set for Feb 21 just hours after the House confirmed that the censure debate woud begin on Feb 24, read the statement.

The Future Forward Movement, as it is known now that it is no longer a political party, does not plan to be silent in any case.

In a message on its Facebook page, it said spokesperson Pannika Wanich would stage an “internationally scandalous” no-confidence event at its Thon Buri coordination centre from 1pm Sunday. Participants deliver the three-finger salute at a rally at Thammasat University on Saturday evening. (Photo by Aekarach Sattaburuth) 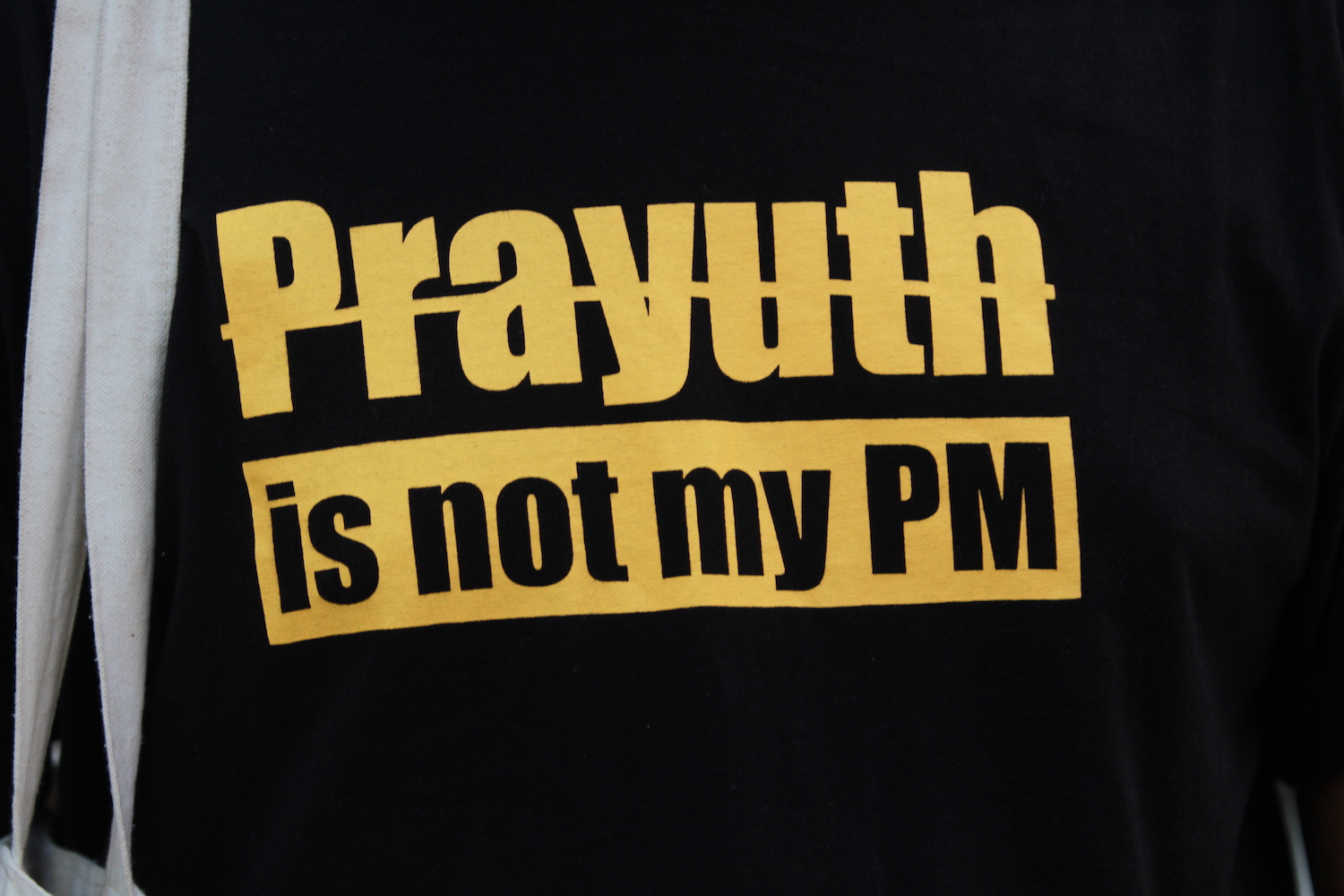 Sign of the times, at the Thammasat rally on Saturday. (Nutthawat Wicheanbut)