Yellow rubber ducks are held aloft by some of the thousands of protesters occupying the Lat Phrao intersection on Friday evening to show their opposition to coups. (Photo by Pornprom Satrabhaya)

Pro-democracy demonstrators transformed the busy Lat Phrao intersection into a giant picnic area on Friday evening as they rallied to pledge their opposition to military coups.

A crowd estimated at 5,000 thronged the intersection to enjoy food, mainly popular northeastern dishes, with protest leaders, who had billed the event as “a rehearsal protest against coups”.

The meals were a symbol showing that people were against coups, a rally organiser said.

Although army chief Gen Narongphan Jitkaewtae has dismissed speculation about a coup to end the deepening political conflict, the People’s Movement posted a Facebook message on Thursday saying history had proved that anything could happen.

Panupong Jadnok, one of the movement leaders reported to be facing lese majeste charges, said that the big turnout would send a strong message that people were against a coup.

As part of what they called “coup prevention” drills, protesters passed an armada of yellow ducks over their heads, to represent the military passing over the people to take the front row of Thai politics.

Another group paraded portraits of generals who had led past coups before ritually burning them.

Inflatable Santa Claus figures and a giant green alien joined the bright yellow rubber ducks that have become a symbol of the movement.

The ducks have even appeared on 10-baht coupons that were given out for onsite purchases at a rally on Wednesday, prompting police to investigate whether the organisers were violating the currency law.

A 32-year-old Bangkok office worker named Natalie said the last coup in 2014 was disastrous for Thailand and warned that the country shouldn’t go down that path again.

“Now is a crisis time in Bangkok and Thailand. I want new elections and to change the prime minister and for a new government to actually listen to the people,” she told AFP.

“I’m only 18 but have seen two coups already. That’s not right,” said Tan, a high school student at the protest who gave only one name. “We don’t want history to repeat itself.”

The youth-led protests since July have focused on three key demands: the resignation of the government led by Prime Minister Prayut Chan-o-cha, a new constitution, and reform of the monarchy under the constitution.

Friday’s rally came just two days after a major gathering outside the headquarters of Siam Commercial Bank, where participants drew attention to the wealth of the monarchy. His Majesty the King is the largest shareholder in SCB, after assets managed by the Crown Property Bureau were transferred to his personal control.

Activists plan another demonstration on Saturday in front of Imperial World Samrong shopping mall in Samui Prakan, followed by a rally at the Imperial Lat Phrao mall in the capital on Sunday.

Political tensions are expected to remain high into next week. The Constitutional Court is scheduled to rule on Wednesday whether Gen Prayut has obtained illegal benefits by continuing to live in an army-owned house even though he retired five years ago. 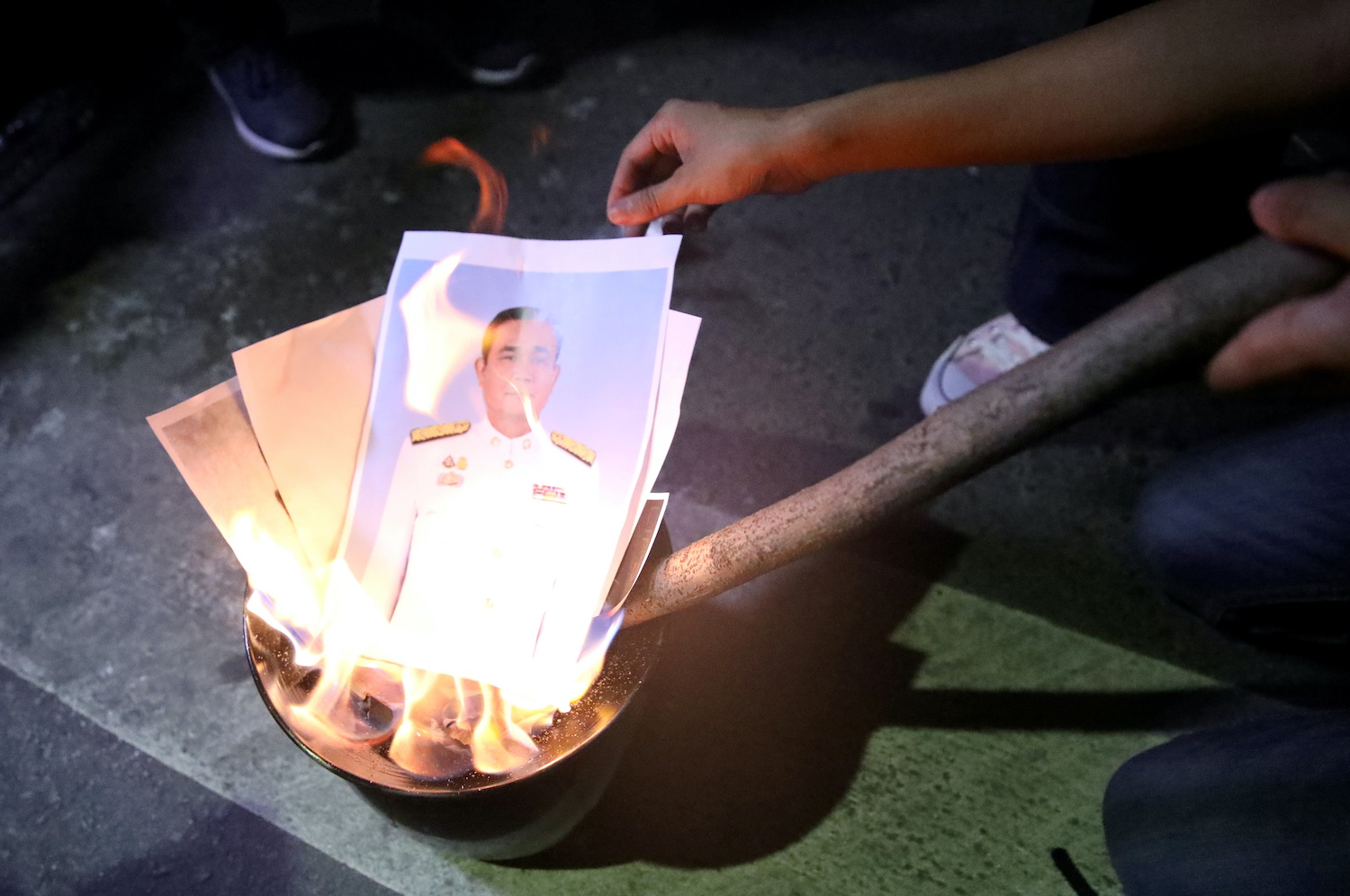 A demonstrator sets fire to a picture of Prime Minister Prayut Chan-o-cha during Friday’s rally at the Lat Phrao intersection. (Reuters Photo) 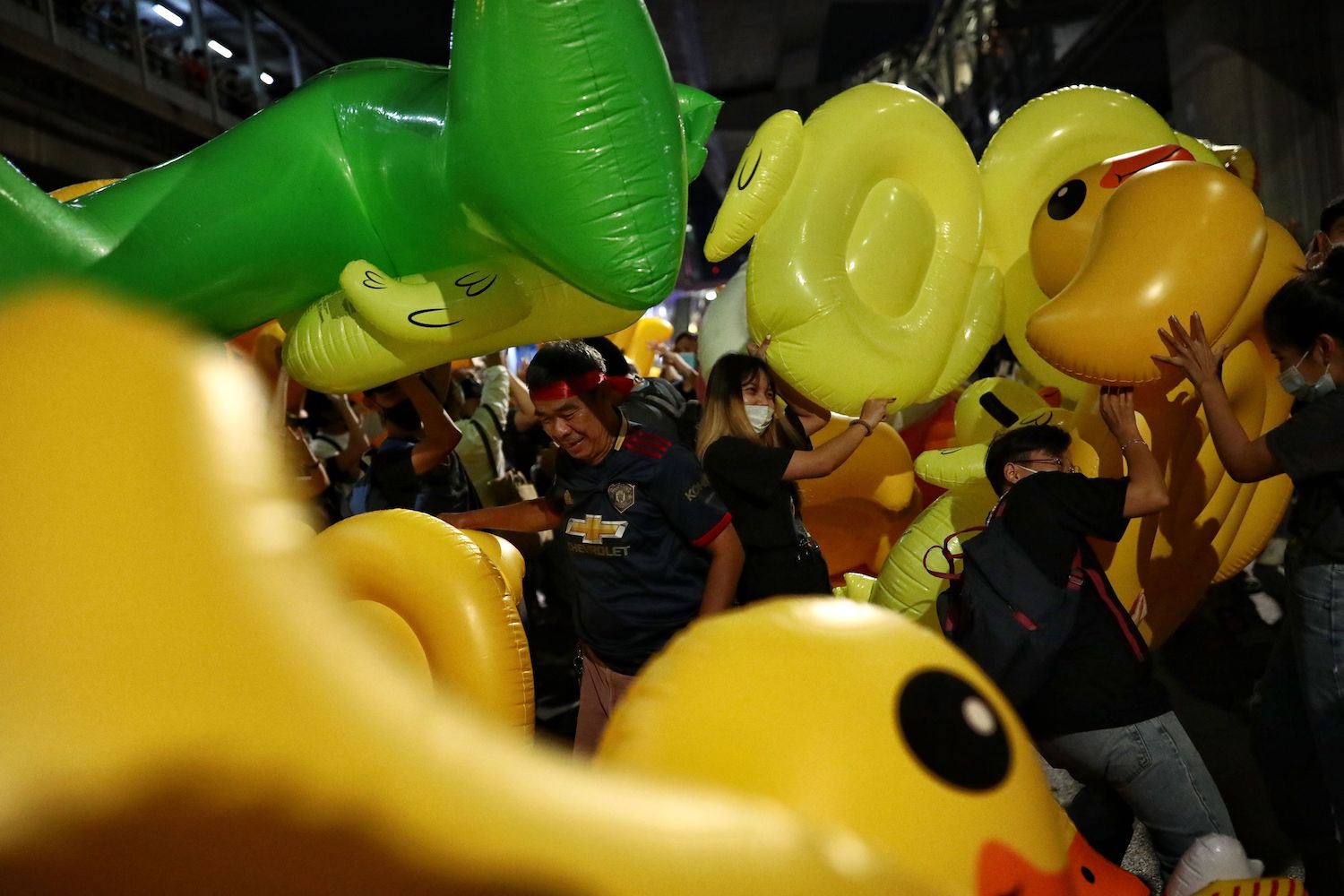