Enforcing the EU "yellow card" on illegal and unregulated fishing will beach 20,000 boats like these and cost 15 billion baht a month in lost revenue. (Photos by Thiti Wannamontha)

On Monday, fishing operators submitted a petition to Deputy Prime Minister and Defence Minister Prawit Wongsuwon, who oversees the illegal fishing issue, via a representative of the Department of Fisheries, asking to postpone the fishing vessel registration deadline to September, from tomorrow.

"We do not want to stop fishing or break the law but we can't carry out our business due to severe legal curbs," Mongkol Sukcharoenkana, vice-president of the National Fisheries Association of Thailand (NFAT) said after a meeting of fishing boat operator representatives from coastal provinces in Samut Songkhram Monday.

They include those from Samut Prakan, Samut Songkhram, Trat, Phuket, Ranong and Prachuap Kiri Khan.

According to the Command Centre for Combating Illegal Fishing (CCCIF), the registration period will end tomorrow and from July 1, those fishing boats which have have not been properly registered, have not acquired legal fishing licences, do not have fishing gear matching the type they registered with, and lack the required monitoring equipment such as the Vessel Monitoring System (VMS) will face legal action.

Under the new fishing law, those who break the regulations could face a maximum of three years' imprisonment and a 300,000-baht fine.

The CCCIF was set up under an order by Prime Minister Prayut Chan-o-cha in an effort to tackle the IUU fishing industry in Thailand and to respond to the yellow card issued to Thailand by the European Union (EU).

The EU has given Thailand, a major seafood exporter, six months to tackle IUU fishing or face a possible trade ban on seafood imports into the EU.

"Do not rush to solve a problem we have had for over 30 years. The problem is complicated and needs time to solve," Mr Mongkol said.

According to the latest survey, as of the end of March, 3,199 fishing vessels with sizes exceeding 30 gross tonnage, and 16,000 smaller traditional fishing boats were operating illegally based on the new law, he said.

Those vessels and boats found to be working illegally would have to stop operating to avoid legal action. 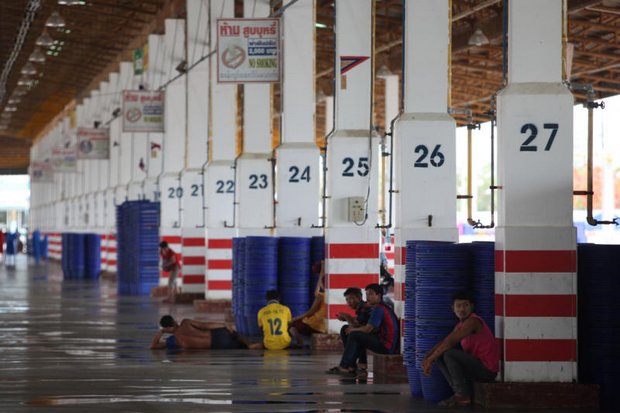 Workers at Maeklong fish market in Samut Songkhram wait for fishing boats, many of them racing against time to reach port before July 1, when the crackdown against illegal, unreported and unregulated (IUU) fishing is to begin.

The eventual impact would hit marine food processing businesses which will face a shortage of 6,400 tonnes of raw materials a day and could lead to the shutdown of 640 fishery processing factories, he claimed.

"The halt of fishing operations could cause 15 billion baht of losses a month if the CCCIF does not change its stance and does not extend the registration period," said Mr Mongkol.

Meanwhile, Meesak Pakdeekong, deputy director-general of the Department of Fisheries, said the government is seeking the best means to rebalance fishing activities and take preventive action to preserve the environment.

"Marine resources are gradually decreasing and the government is trying to stop that decline," Mr Meesak said.

Deputy government spokesman Sansern Kaewkamnerd said the CCCIF should be able to build an understanding with the fishermen over the government's measures and policies.

He said the fishing boat operators need to adapt themselves to comply with the new regulations which the government devised to bring them up to international standards.

The situation would worsen if Thailand's seafood exports worth 200 billion baht a year were banned by the EU, in which case operators would suffer more.

Panitan Wattanayagorn, an adviser to Gen Prawit, said the Agriculture and Cooperatives Ministry is considering measures to give assistance to affected fishing operators.

The CCCIF will meet on Thursday to consider the operators' request, a government source said.