Police chief Chakthip Chaijinda said he ordered subordinates to look for a supposed mastermind behind Myanmar protests against the Koh Tao ruling. (Photo by Pornprom Satrabhaya)

While Myanmar's Foreign Ministry said no group was behind the widespread protests and there was no evidence to support such an accusation, Thai police continue to assert that the outrage over the death sentences handed down to two Myanmar migrant workers is being stoked by groups trying to exploit the situation for political purposes. 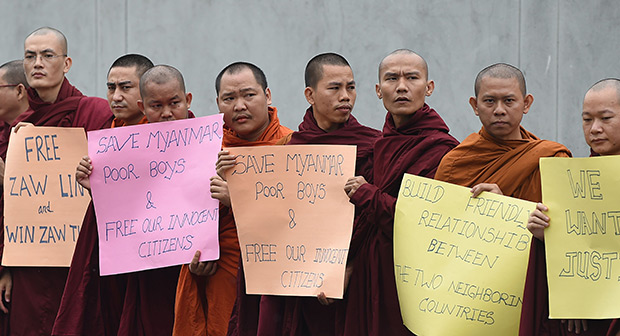 Buddhist monks from Myanmar hold placards as they demonstrate outside the Thai embassy in Sri Lanka's capital Colombo on Dec 28. (AFP photo)

"Only some groups are taking action to oppose the court ruling. In Thailand police are preventing it," the police chief said.

He repeated reasoning made by a deputy police spokesman at a news conference Sunday that there had been 126 previous murder convictions of Myanmar nationals in Thailand, yet only this one was sparking protest.

"Police are looking for the people who instigated it. I ordered all units related to security, especially the Special Branch division, to find the groups that are behind the demonstrations by Myanmar people, Pol Gen Chakthip said, admitting he had "no idea" who the supposed instigators are or if they are even in Thailand.

The pursuit of a supposed instigator of the protests is yet another sign that Thai officials have been put on the defensive by Thursday's judgment, which has been seen by Myanmar citizens at the culmination of a year-long frame job of Zaw Lin and Win Zaw Htun for the September 2014 rape and murder of Hannah Witheridge and the murder of David Miller on Koh Tao.