Supa Sirisingh’s no-nonsense approach to life has helped her pen books which explore the depths of human emotions, earning her praise from readers across generations

The novels of Botan — a pseudonym for novelist Supa Sirisingh — one of the country’s most-loved writers, have enchanted readers across the generations, even though her endings aren’t all happy. Supa has always remained true to her unique writing style which has made her a household name. She finds that sad endings don’t always translate into emotional misery for her readers.

On the contrary, sad endings help readers explore the depths of human experience and evoke the kind of unpretentious feelings people can identify with.

Pawasu Sirisingh, one of Botan’s two daughters, describes how having the famous author as her mother attracted attention even from her childhood classmates.

“They were fascinated to hear about Botan’s books and enticed by the unconventional endings,” she said. 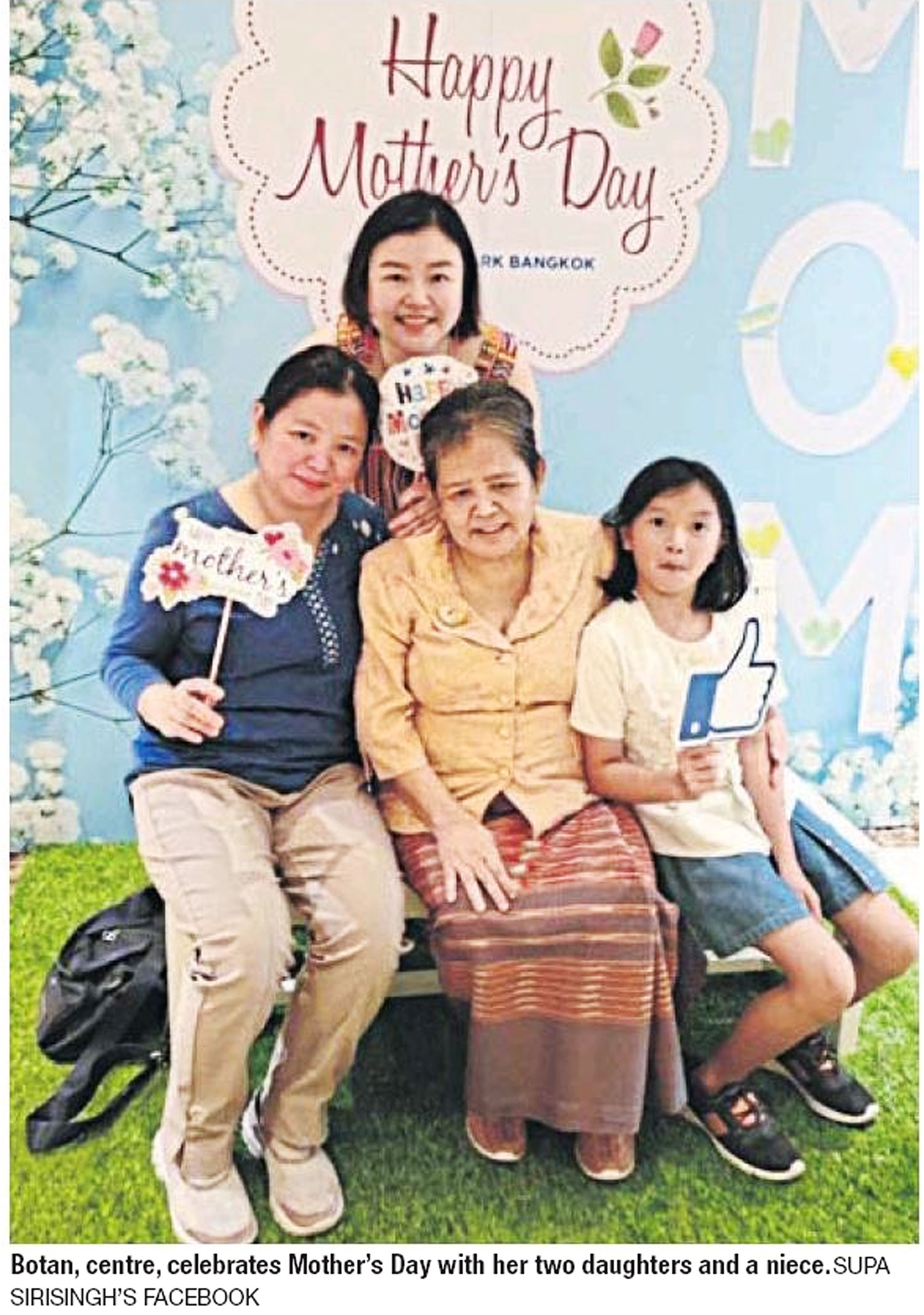 “My friends at primary school asked me whether mum had written any books which didn’t end on a sad note,” she added.

She and her younger sister, Suweeriya, agree that their mother’s books are polar opposites of romantic literature.

Botan’s avid fans are also obsessed with the question of why so many of her heroines and heroes meet their demise in the last chapter.

In fact, many of Botan’s book endings may reveal a lot about the writer’s own character.

Botan has explained that she is serious about matters that surround her and the protagonists in her novels generally demonstrate this no-nonsense perspective on life.

“I want to be realistic. We live in the real world, not in a fantasy,” she said.

“You could draw certain life lessons from my novels.” You have to fight in life. If you don’t, you won’t survive,” she added. 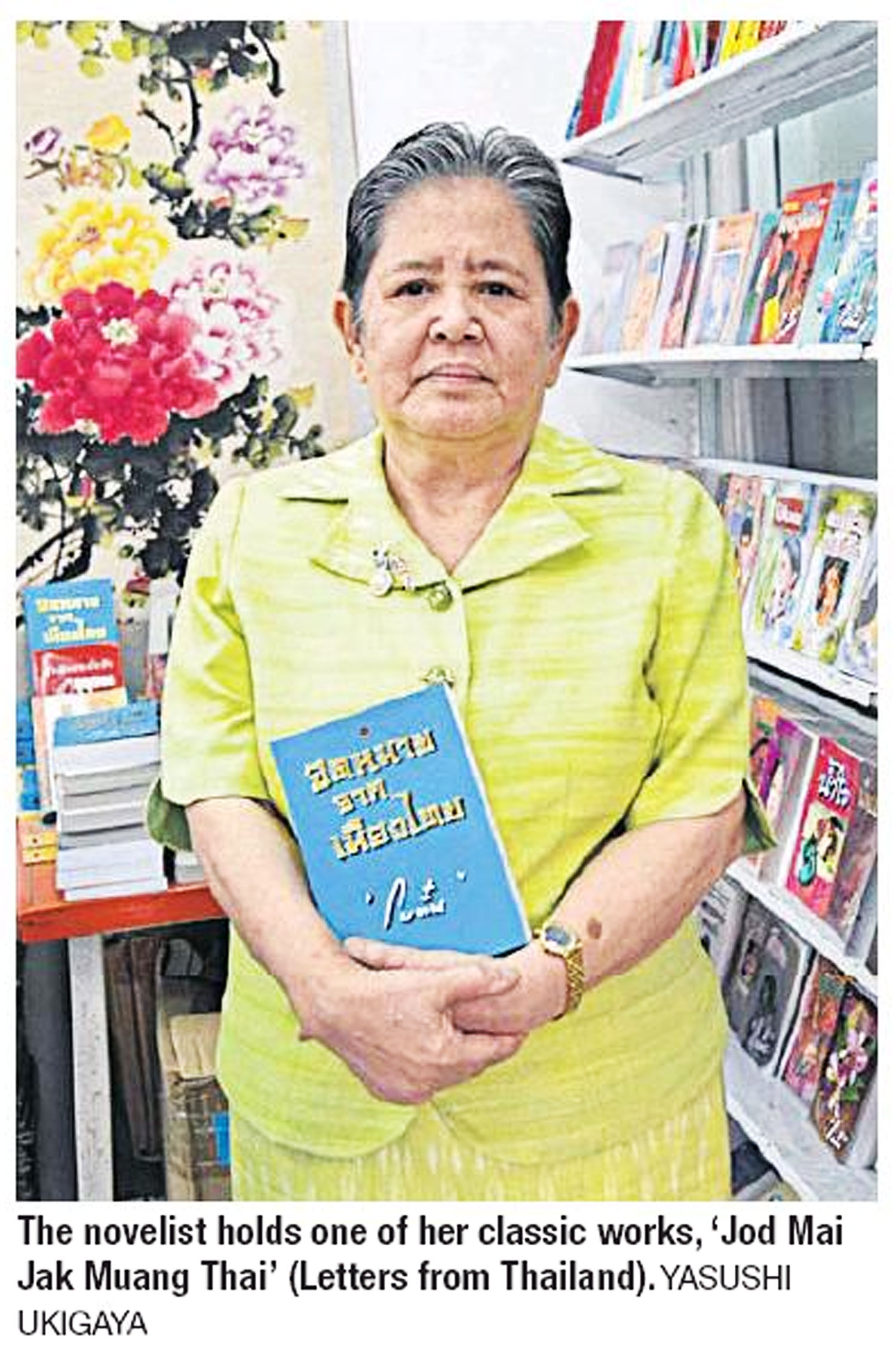 Among classics that have flowed from her pen is Thong Nua Kao (Heart of Gold). The novel has inspired several television adaptations which have earned its actresses awards for outstanding performances in leading and supporting roles.

In the plot of Thong Nua Kao, Lamyong, the main character is born and raised in a slum by a poor family. Lamyong — young, radiant and ambitious but lacking in purpose and tempestuous — is the archetype of a girl too eager to climb the social ladder by skipping a few rungs.

Lamyong’s outward beauty is unable to bring her true love or happiness. She goes through several marriages which end with children and divorce.

However, Botan also wrote in a silver lining to taper off Lamyong’s episodes of failure, disappointments and inadequacies. In Thong Nua Kao, readers were also introduced to Wanchalerm, Lamyong’s devoted son, whose strong filial piety gave Lamyong the lift she needed to carry her over the tough phases of motherhood throughout her later life.

The most riveting part of the novel came when Wanchalerm honoured his mother by ordaining as a novice monk, a virtue in Buddhism. While in a saffron robe, he took the best care he could of dying Lamyong who suffers terminal illnesses of alcoholism and syphilis.

Botan once said in an interview with Preaw magazine that the plot and characters of Thong Nua Kao imitated the lives of people she had come in contact with.

“I based the plot on a boy who lives with his mother, who has many lovers, in a crowded community.

“I noticed sorrow in his eyes while watching him raise his younger sister. His grandmother later took him to the temple to be ordained as a novice monk,” the novelist said.

After the boy entered the monkhood and came around to the writer’s house to collect alms in the morning, Botan said she noticed how the now novice monk was visibly at peace with himself after finding solace in religious teaching.

Similarly, Lamyong — like so many leading women in Botan’s books — meets the same fate. She dies in the last chapter as the book draws to a close.

In another bestseller book, Kwa Ja Ru Diang Sa, the misguided heroine also led a rich, full life marked by eloping with a young man who she believed to be her first and true love. 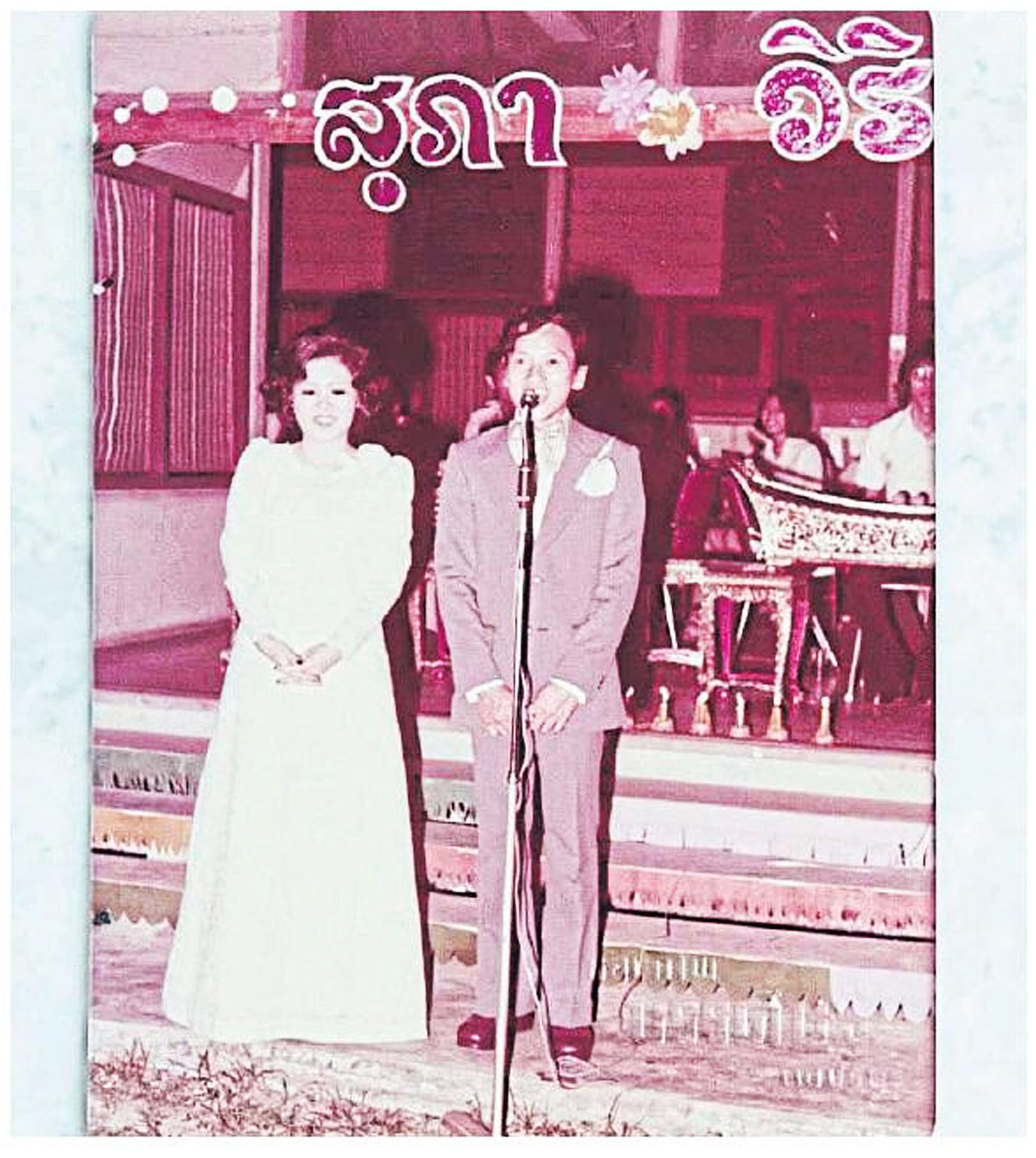 The girl’s youth and naivete made her blind to the dark side of society. She was raped before being trafficked to work in a brothel just as her husband was killed for his involvement in a drug racket. Their child was finally brought back to the young girl’s parents, heartbroken by her fate.

Looking at the situation from the young mother’s shoes, Botan said it was a lesson for families who go overboard in rearing their children by subjecting them to excessive discipline which can push their fragile emotional and mental state to its breaking point. It is crucial to let children know when they reach teenage years that they can decide how to live their lives so they can mature into adults with a good head on their shoulders.

Born in Bangkok, Botan is ethnic Chinese and grew up surrounded by Chinese culture. Her family invested a great deal in her education which is why she has come so far in her writing career.

Her father was elated when he heard Botan speak Chinese, unlike the typical Chinese-Thai family in another one of her famous novels — Jod Mai Jak Muang Thai (Letters from Thailand) — which does not regard preserving their ethnic roots as an asset.

“When I got home from Triam Udom Suksa School (in Bangkok), I would head to the main road close to my house, from where my father would pick me up.

“He wouldn’t let me make the trip home on my own because our house was located deep inside the garden on Bangkok’s outskirts,” she said.

After she earned admission to study at Chulalongkorn University’s Faculty of Arts, she moved in with a relative so that she would not have to head home too late.

Botan is well-read thanks to the variety of books she was exposed to since a young age.

After graduating in 1966, she started working at the Thai Wattana Panich printing house where she met her future husband, Viriya Sirisingh. 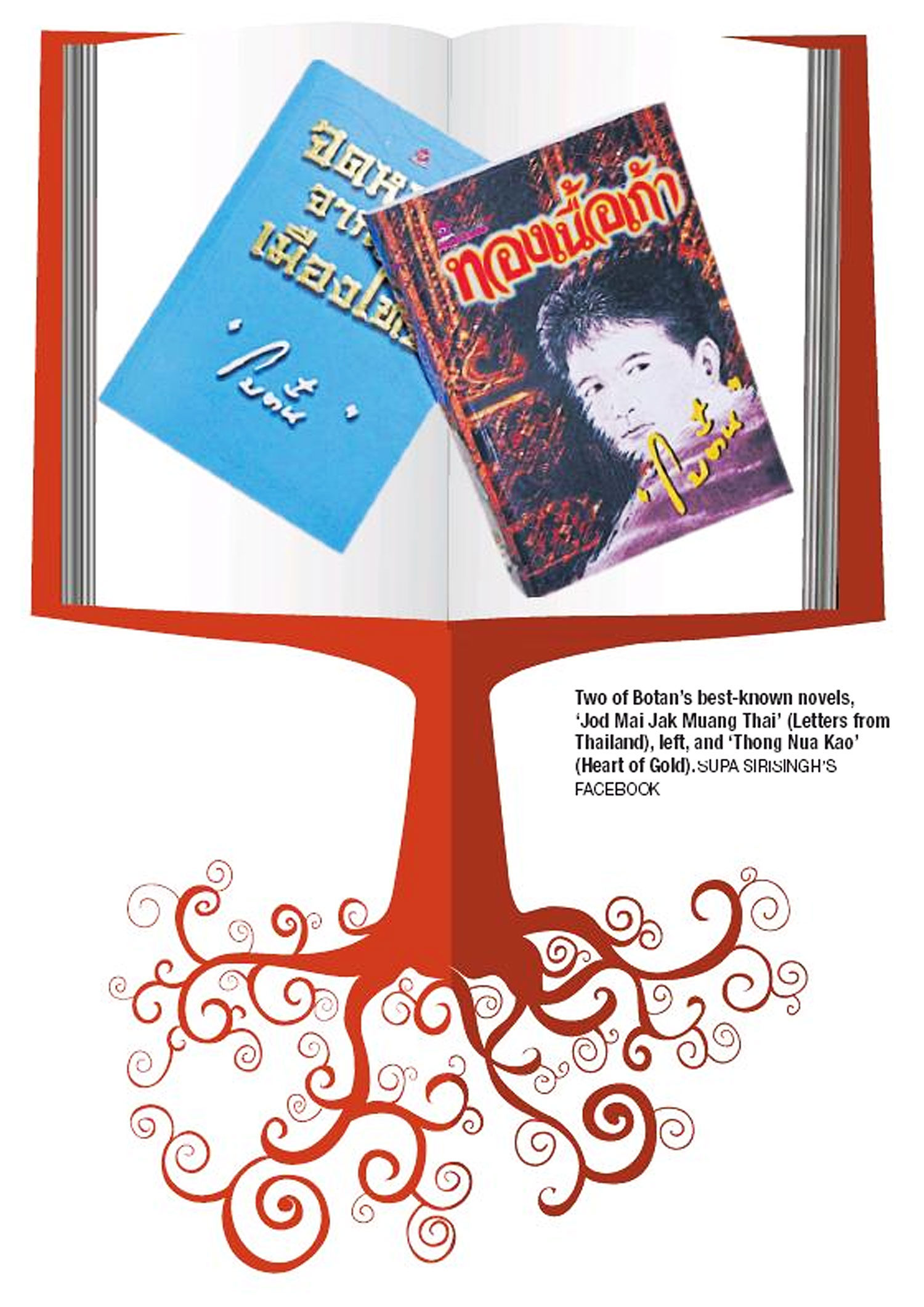 By the time she joined the printing house, she was already balancing writing novels while working.

Her Chinese ancestry inspired her to write Letters from Thailand in 1969. The novel tells the story of a Chinese man named Tan Suang U who fled poverty in mainland China in the hope of making a fortune in Thailand at the end of World War II.

Living in Thailand was not easy for Tan Suang U as he initially faced culture shock and found it hard to assimilate and settle in his adopted country. Living in Chinatown area (Yaowarat) in Bangkok, he felt lonely and decided to send letters to his beloved mother back in China telling her about the difficulties and opportunities in his new country. However, the 100 or so letters he mailed never reached his home in China after they were intercepted by the communist government.

Botan says she constructed the plot of the story around the atmosphere and everyday life of the Chinese families close to her.

The setting and ambience of Tan Suang U’s house in Yaowarat were taken from her relative’s home where she stayed during her years studying at Chulalongkorn University. Tan Suang U’s life resembled those of many early migrant workers who struggled to adjust themselves to the new culture and local people.

But many readers did not find what they feel is the depiction of certain groups of Thais as compulsive gamblers and ignorant very appealing.

Botan explains the central message of the story was Tan Suang U’s constant struggle to beat the immense odds in order to build a secure future for himself, which is what many typical early Chinese settlers in Thailand went through.

Botan’s father was one of them. Like many of his peers and those before him, he hailed from China and worked as a cook’s helper. The money he earned from jobs in the kitchen put food on the table.

Even Botan’s pen name comes from peony, a favourite flower of Empress Wu Zetian of the Tang Dynasty under whose rule China consolidated and unified as an empire.

“It’s quite a noble flower in my opinion,” said Botan. “The man female characters in my novels are mostly strong women with a fighting spirit,” the novelist said.