The charm of Ban Bang Thao Choeng Thale village -- a coastal community in Phuket's Thalang district -- has been cast into the spotlight thanks to its successful adoption of the royally prescribed sufficiency economy model which teaches residents to make the best of what they have. 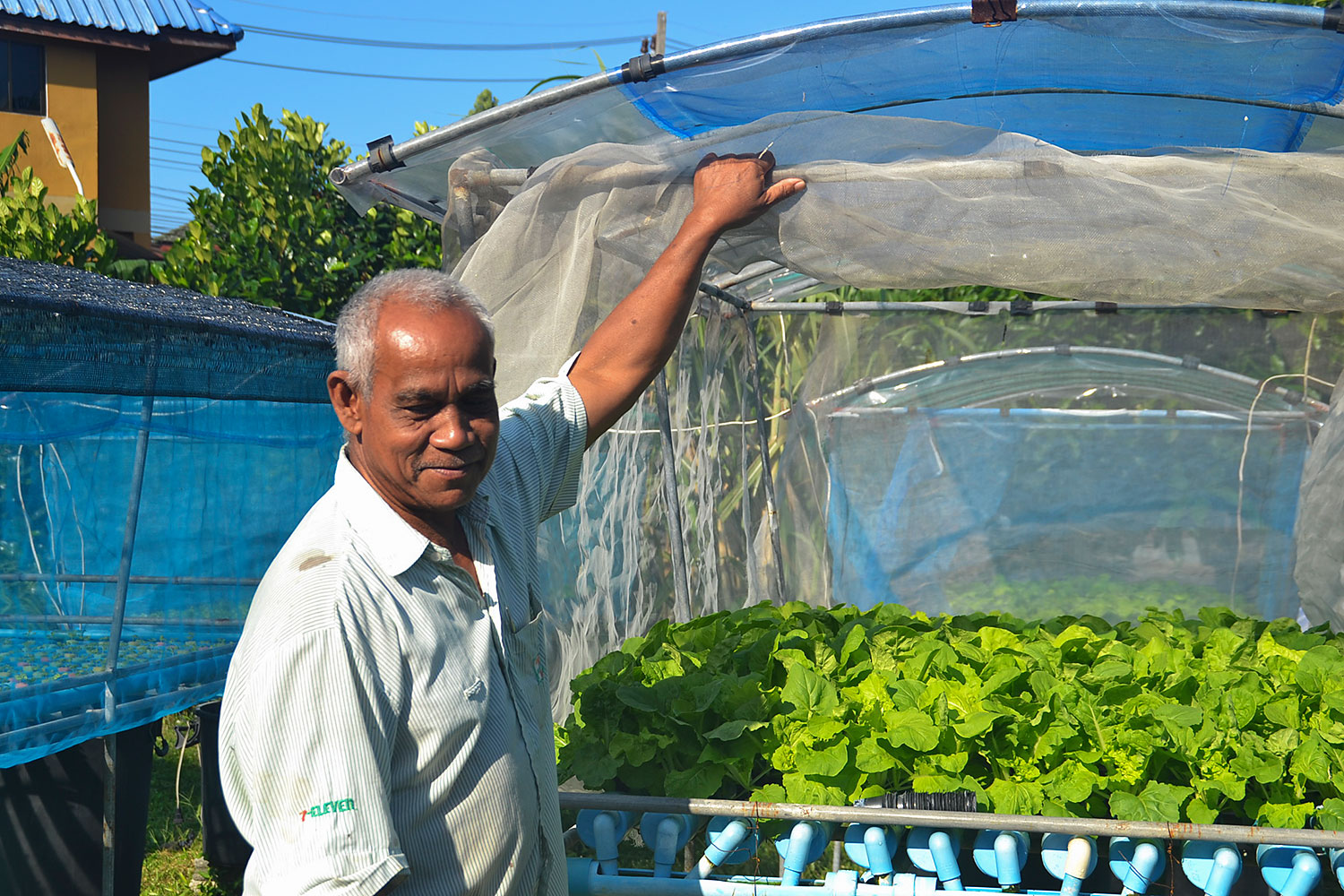 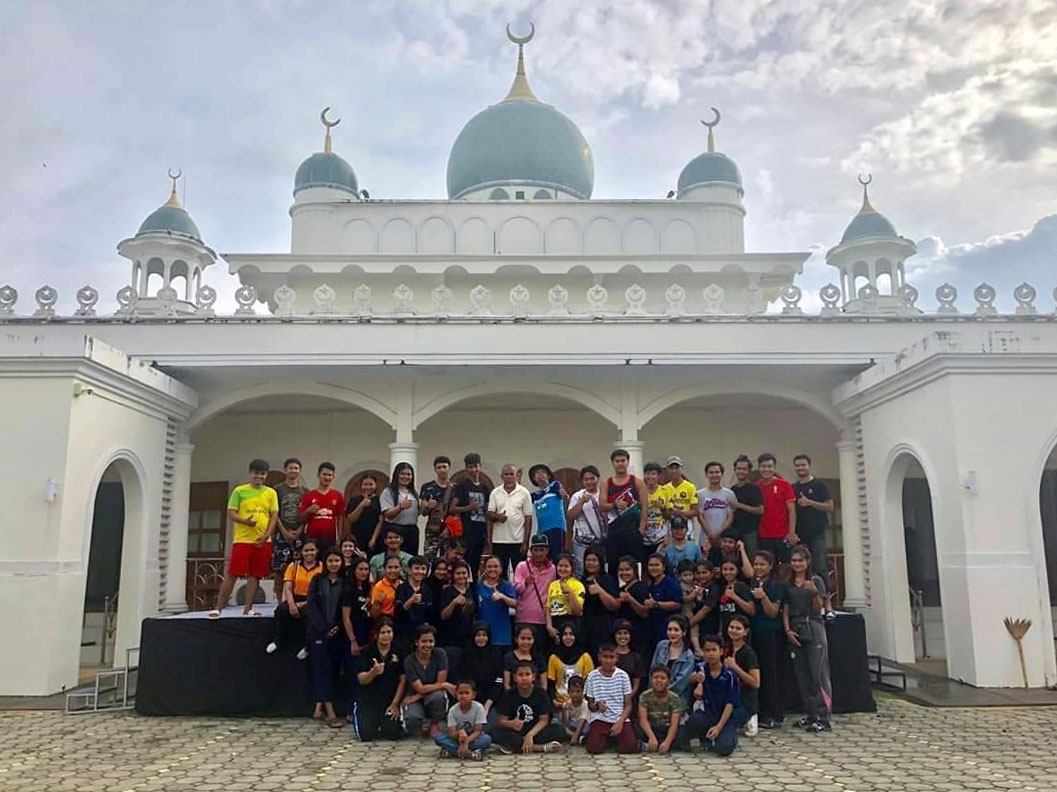 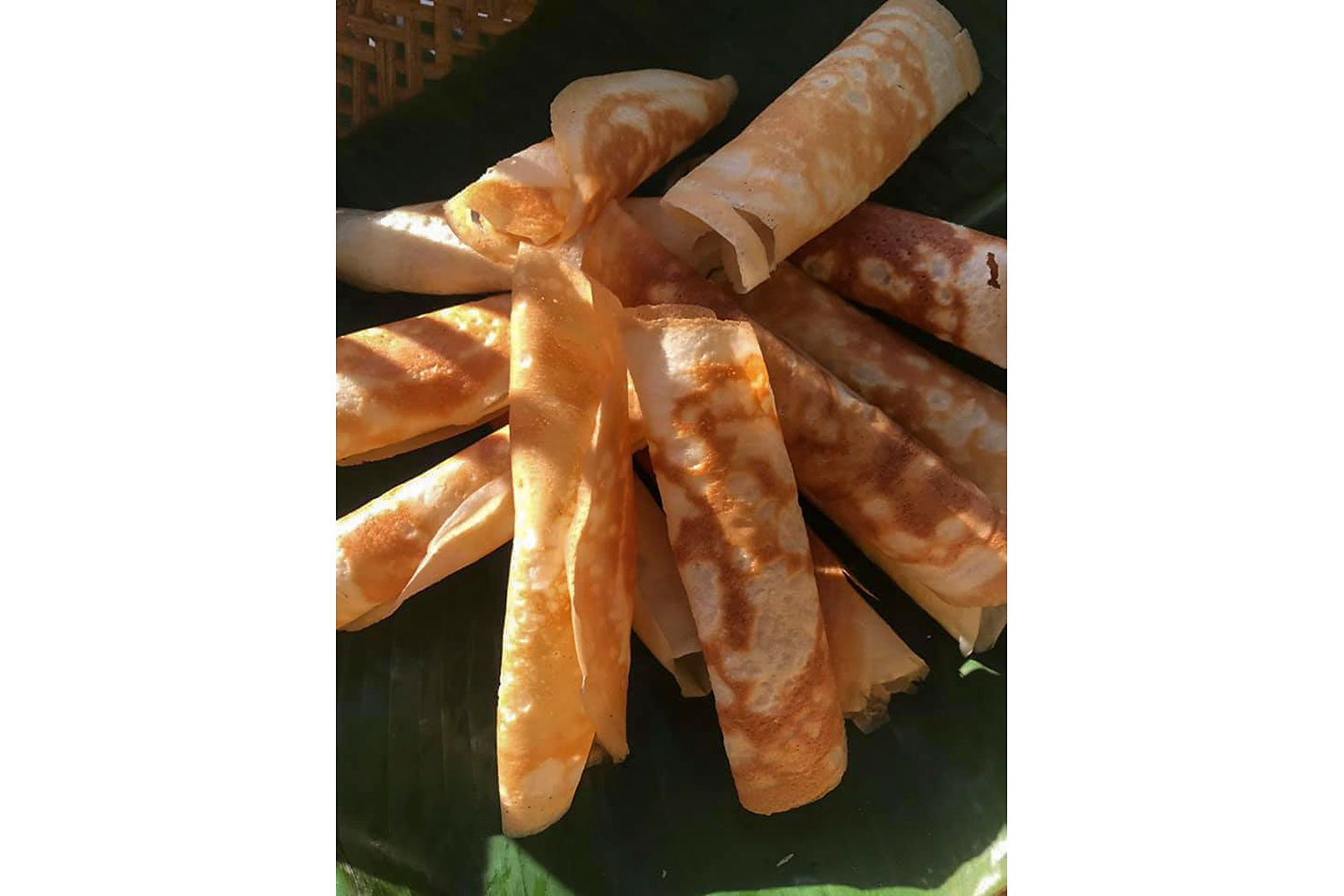 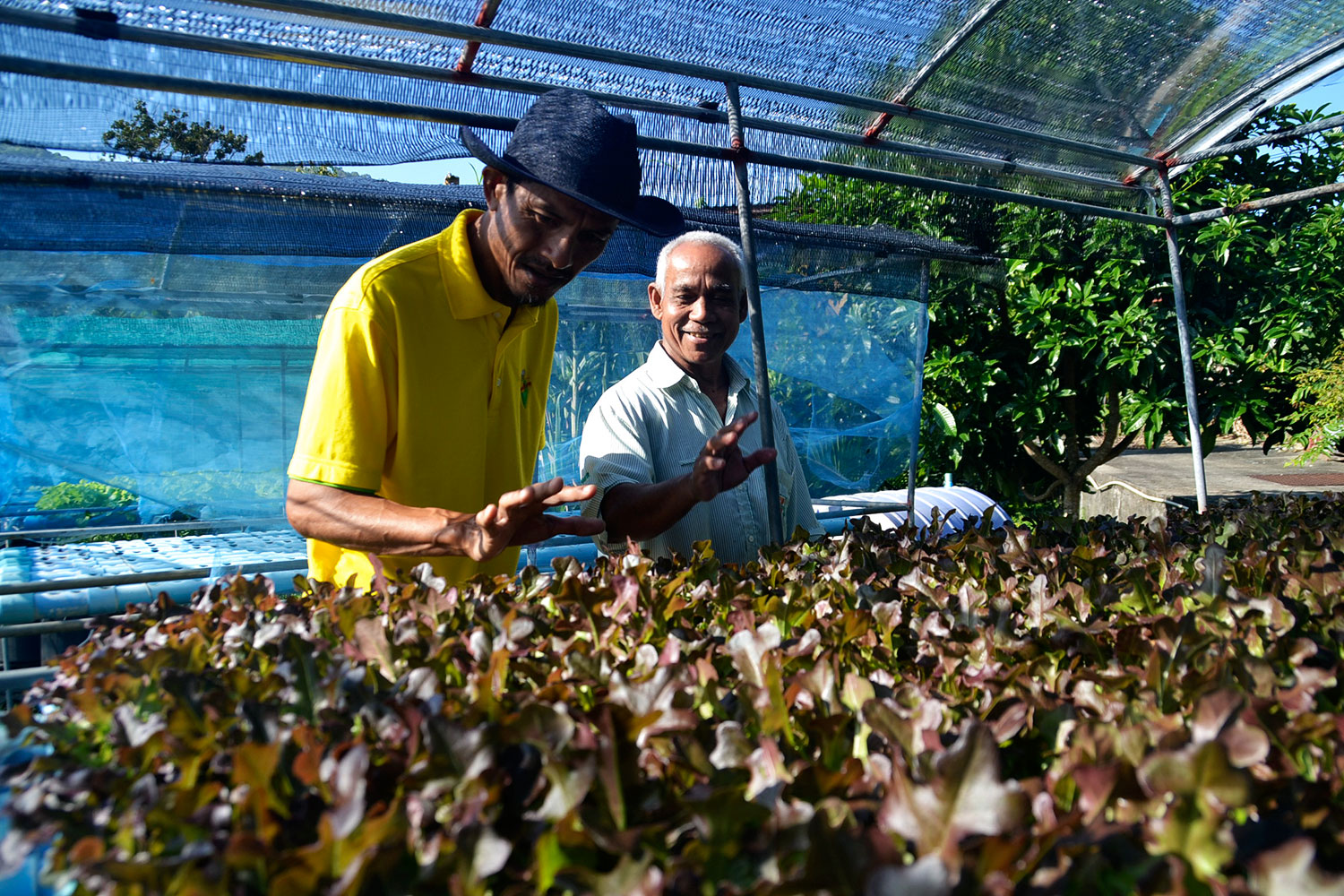 Success in sufficient living at Ban Bang Thao Choeng Thale village in Phuket lies with growing hydroponic vegetables and other produce at home and using fresh ingredients. The village has also become popular among tourists.

The unity of the community, in which Muslim and Buddhist residents co-exist in peace, is something visitors can experience even on a half-day trip.

A standard half-day tour -- offered by ecotourism groups in the village -- begins at Mukarom, which is said to be the largest mosque in Phuket. The mosque is designated as the meeting point for visitors who pay 800 baht each to enjoy a guided tour around the community.

After arriving at the meeting point, visitors are escorted to motorcycles with modified sidecars which are used for the duration of the trip. The first stop is an organic farm owned by Suwat Manakit, a former schoolteacher who built the farm more than a decade after his retirement.

At the farm, visitors can observe how Mr Suwat and his family grow and harvest hydroponic vegetables, coconuts, mangoes, bananas, pumpkins, guavas, among other lucrative produce. The retiree-turned-farmer regularly earns money from selling these farm products.

The next stop is a rubber farm owned by a couple -- Torep Khahapana and Tomina Khahapana -- both 78, who still look physically fit and always welcome their guests with a smile.

They have been running the small one-rai farm for more than five decades. The couple wakes up early in the morning each day to tap latex which is processed into rubber sheets for sale to local rubber factories.

By selling the rubber produced on their modest farm, the couple is able to earn enough money to support their family. The couple also raises ducks and grows on vegetables for household consumption on the farm.

Visitors to the village taste vegetables grown in people’s backyard as they take a boat on a short excursion. The village also produces sun-dried fish.

The third stop on the tour is a goat farm run by Manit Ngankhaeng, 61, and his son Manot Ngankhaeng, 42. The farm has 40 goats which belong to a special breed of milk goats which the family helped develop.

The father and son duo now breed goats for their milk, a small business operation which generates about 40,000 baht per month in income. The pair believe that goat farming is a sustainable business unlike Phuket's tourism industry which is unpredictable.

Success in goat farming was made possible due to His Majesty King Bhumibol Adulyadej The Great's sufficiency economy principle which has provided the family financial security and taught them to live within their means.

Although the family is not in the tourism business, they have opened their door to visitors keen on learning the tricks of the trade.

The farm doubles as a learning centre where visitors from Europe and India can learn a thing or two about goat keeping from the family without having to overspend on their budget.

The half-day tour concludes before lunchtime with the last stop made at the village's local cuisine conservation group. Here, visitors are served local delicacies and also given the opportunity to learn how to cook some of the dishes.

One of the dishes visitors frequently taste is Khao Yam Bai Phahom, a rice salad mixed with Phahom leaves. The mixtures also include several other refreshing herbs including lemongrass, galangal, kaffir lime leaves and chillies which are all finely chopped before being tossed in with the rice and a salad dressing. 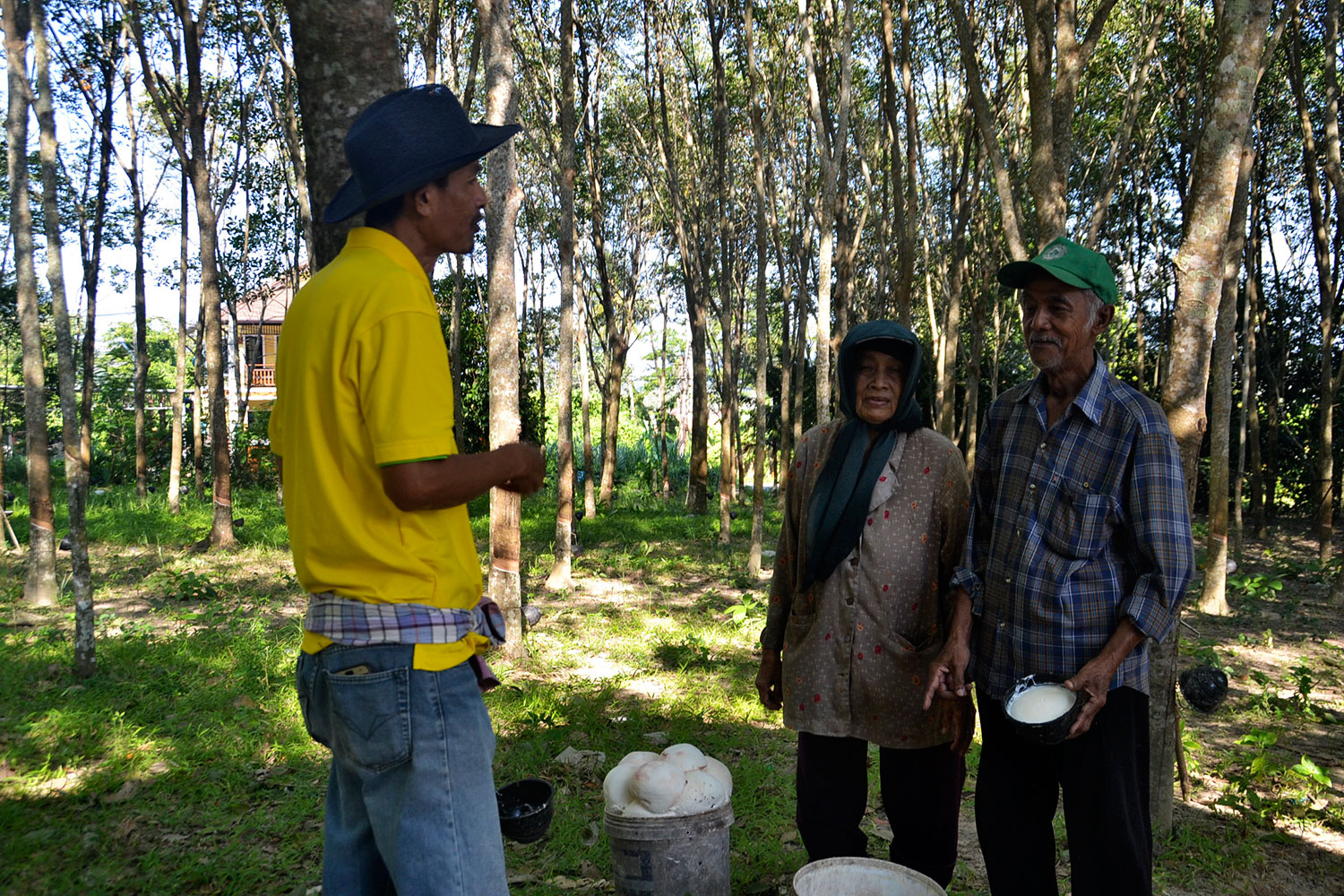 The salad dressing is made of finely chopped galangal, shallots, peanuts and coconut, which is stir-fried with shrimp paste and crushed with sun-dried fish and seasoned with sugar and soy sauce.

The salad, which is served with a sour soup and deep-fried sun-dried fish, costs 40 baht.

To increase sales and introduce the dish to far-away markets, members of the local food conservation group are trying to figure out how to improve the salad's shelf-life.

Most residents in the community make a living by growing crops, keeping domestic animals and engaging in artisanal fishing -- jobs inherited from their forefathers.

Sonthaya Khongthip, the president of Ban Bang Thao Choeng Thale agricultural tourism and ecotourism group, said the community was already registered as a "community enterprise" based in tambon Choeng Thale in Thalang district.

The registration was required to allow the community to offer a professional community-based guided tour service. The group, which initially comprised 33 members, was licensed on March 24, 2014.

"We have faith in the power of harmony among people in the same community, a sense of sharing and King Rama IX's landmark sufficiency economy philosophy," he said.

Before the tourism group began operations, the village had set out on preserving the local delicacies. In the beginning, the group focused mainly on Halal-certified nam phrik chilli dipping sauces.

In its second year as a certified community-based guided tour service, the group added Khao Yam Bai Phahom rice salad to its line of gastronomic products to help strengthen the local food identity. Moreover, since sun-dried fish is an important locally sourced ingredient, it is pounded into floss and sprinkled on the rice served with Khao Yam Bai Phahom to highlight its distinction as a local dish.

Ban Bang Thao Choeng Thale is one of only six Phuket communities recognised for its ability to generate a sustainable income from product sales and tourism, according to Mr Sonthaya.

The community is following the Japanese tourism development model of "get big results by doing little things".

In the future, designs and stores about native handicrafts will also add more value to the community's line of products including batik, hand-dyed fabric, sun-dried fish and honey soap, which are already popular with visitors who bring them home at the end of their trips to the country.

Moreover, online marketing has also proved to be a lucrative channel for the sale of products to all corners of the world, he added.

The cabinet on Wednesday approved two long-weekend holidays, one in November and the other in December, proposed by the Ministry of Tourism and Sports to spur the economy.

SINGAPORE: The Monetary Authority of Singapore (MAS) said on Tuesday that it was 'closely studying' media reports that Singapore banks had informed US regulators of suspicious transactions.

The Metropolitan Police Bureau is preparing multiple charges against 16 leaders of the anti-government demonstration in Bangkok last weekend.