It’s not without reason that the little, but internationally known, town of Pai stands out as a travel destination

It’s not without reason that the little, but internationally known, town of Pai stands out as a travel destination. 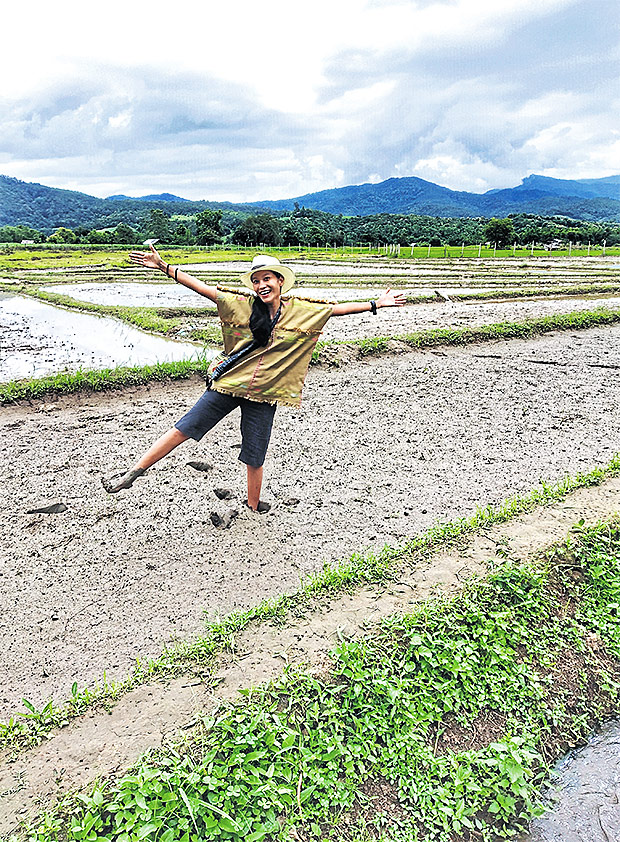 In Pai, there are many ways you can get in touch with nature and learn about the ways of life you cannot find in the city. This visitor from Bangkok enjoys a rare chance to walk in a muddy paddy before participating in a rice planting demonstration.

“So when was the last time you visited Pai?” My mind drifted back to the question. I couldn’t get myself the exact answer. It seemed like ages. One thing for sure was that this would be my first time to see Pai during the rainy season, not the usual cool season when the place is crowded with tourists. It would also be the first time I came with an aim to explore Pai’s lesser known gem, its culinary scene.

During my recent three-day stay in Pai, apart from the town’s wellknown walking street lined with numerous food carts and stalls, I also visited quite a few eateries. Among them were two locally famous restaurants specialising in laab, my favourite northern dish made with minced meat. The laab of the North is heavy on spices and is completely different from the northeastern version commonly found in Bangkok and the rest of the country.

One of these two restaurants claims to serve “the best laab in the world”. Of course, it’s just a gimmick to draw people to its location, which is relatively far from the town centre. To me, the buffalo-meat laab at both places were as good as similar dishes at the laab shops I visit every time I go to Chiang Mai. Another thing I like about such conventional eateries is the fact that they usually serve fresh local
herbs and vegetables free of charge. At the two laab restaurants I visited in Pai, the plants grow wild on site, just a few steps from the dining tables. 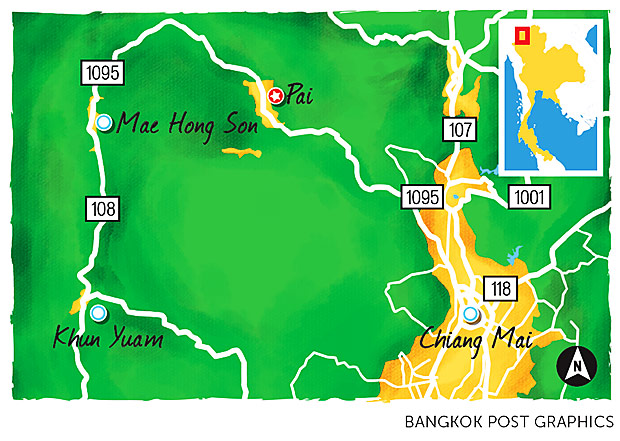 Decent international cuisines, from Italian to French to Mexican, are easy to find in Pai, both at stand-alone restaurants and in hotels. Vegetarian and vegan travellers also love Pai because the kind of food that caters to their diet preference is not hard to find. There are even eateries that specialise in organic dishes. Usually, at such restaurants, healthy snacks and chemical-free home-made products, from soap to dishwashing liquid, are available for sale. In this age where virtually everything goes online, it’s nostalgically refreshing to see old-school notice boards at some restaurants full of announcements of upcoming yoga or meditation classes, and a wide variety of workshops and events.

Like in Chiang Mai, Pai is a great destination for coffee lovers. Delightful freshly brewed coffee is easy to find. Several cafés are not just tastefully decorated but offer delicious cakes and magnificent vistas that can easily make sipping coffee there one of your unforgettable moments.

As I was leaving Pai to catch my homeward flight in Chiang Mai, I told myself I would soon return to this charming town, maybe before the high season. What about you? When was the last time you visited Pai?

From meat dishes like traditional northernstyle laab and lavish Western, or even Mexican, cuisine to vegetarian and vegan goodies creatively made with organic, locally grown ingredients, Pai boasts a plethora of yummies to delight all kinds of foodies. But it’s not just savouries that this charming northern town has to offer, some cafés here serve lovely sweets as well as good coffee and healthy herbal drinks that make your stay in Pai even more memorable. 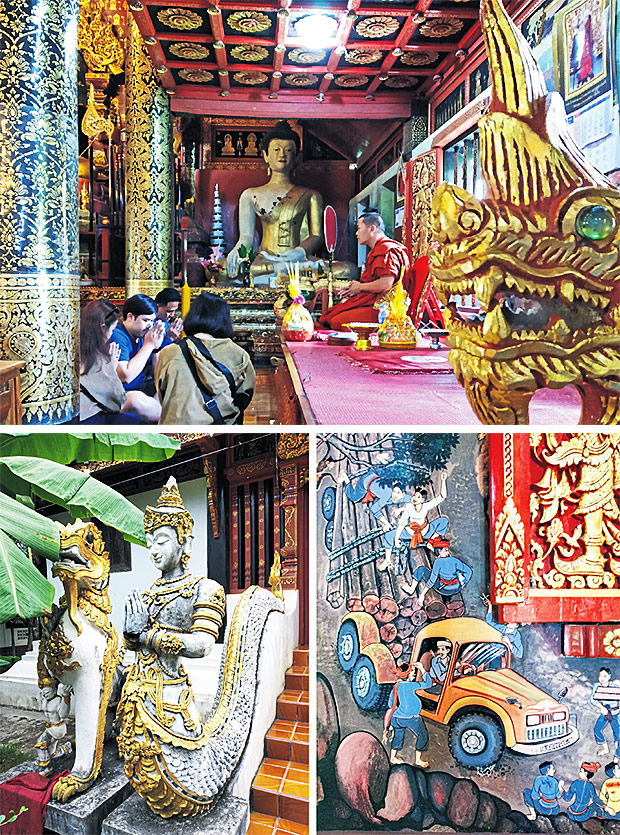 Dating back seven centuries, Wat Si Don Chai is Pai’s oldest Buddhist temple. It’s a pity none of the original structures survives until today. However, the current version of the temple is an impressive work of art. The contemporary murals inside the prayer hall, which depict the history of Pai and the temple itself, are new but fascinating. This is one of the places you should not miss once you’re in Pai.

Apart from its culinary wealth and countryside setting, which is normally peaceful except in the high tourist season from November to February, Pai is blessed with many attractions, from historical sites and hilltop scenic lookout points to waterfalls, hot springs, and one of the country’s most famous walking streets, one of the few that opens every evening, all year round. Eating is not the only activity that involves food. In Pai, there are classes and workshops that teach you how to prepare various kinds of food. At Isara Garden (Facebook: isara.garden), for example, you can learn how to create vegan dishes from local herbs and organic produce. Ever wondered how butter is made? I witnessed the answer and got to taste freshly made butter at Romance Farm (Facebook: Romance-Another-story-in-Pai). 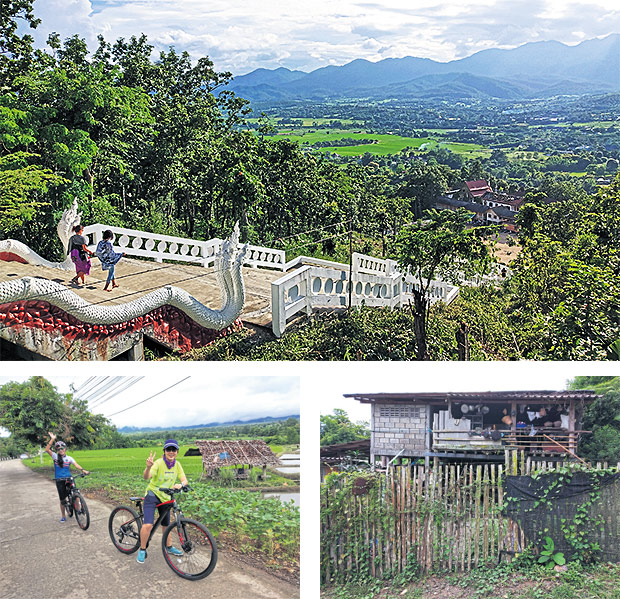 Pai is not a big town but there are many places of interest in outlying areas that are too far to walk. Renting a motorcycle or a bicycle allows you to explore more of Pai on your own. The latter may not be as fast but since it is much quieter, cyclists can venture into communities with less chance of ruining the peaceful atmosphere. 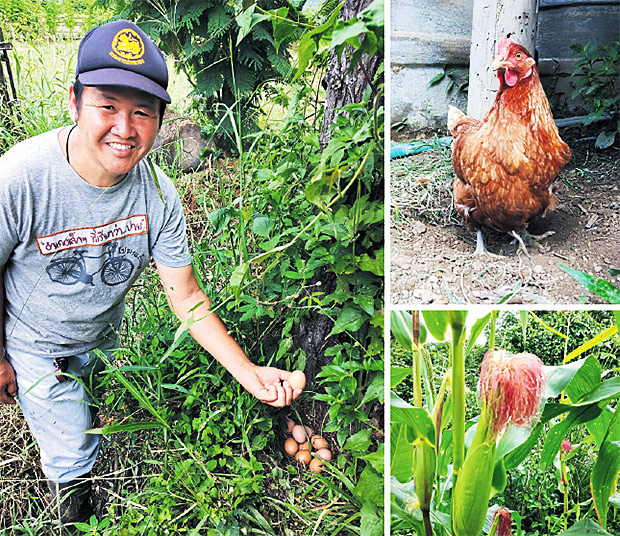 Every day Prayoon Pimpa entertains himself with an egg hunt in the 2 rai Akira Organic Farm (Facebook: baansuanakira) that he and his wife Netnapa started four years ago. Prayoon is the village head of Ban Tha Pai Mu Sam, 6km southeast of Pai downtown, and Netnapa works at a Wiang Nuea Tambon Administration Office. Adopting the late King Bhumibol’s sufficiency economy, the couple now enjoys a better quality of life they previously could not afford. Not only do they get fresh, chemical-free food at very little expense from the various plants and animals they grow in their small farm, they also earn extra income from selling excessive produce. From their 30 or so free-range chicken alone, they can collect at least 15 eggs each day, which is obviously too many for family consumption. For the sake of comparison, in Bangkok a pack of 10 organic chicken eggs costs 85 baht. That’s 8.5 baht each! Prayoon and Netnapa are not the only people in Pai who embrace organic and integrated farming. In this part of Mae Hong Son province, it’s not rare to see maize or other crops sharing a plot with various plants and insects. 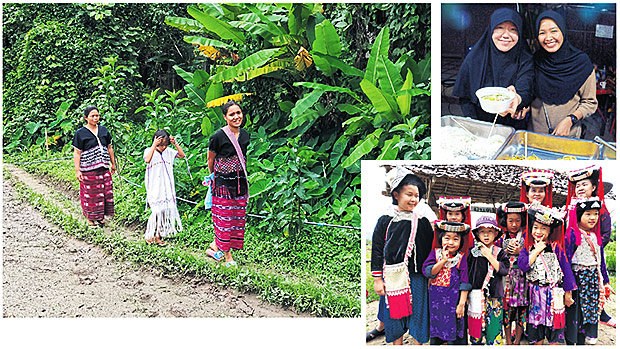 Pai is home to many ethnic groups, not to mention artists and former city slickers from Bangkok and around the globe, who have chosen to settle down here. All these people have brought their cultures and creativity in various forms that make Pai as enchanting as it is today.

- Pai is 145km northwest of Chiang Mai. However, due to the twisty mountain road that links the town to Highway 107 from Chiang Mai, it normally takes three hours to get there by land.

- Shuttles from Chiang Mai’s Arcade Bus Station are available every day. Check out http://premprachatransports.com for details.

- A flight from Chiang Mai can shorten the travel time to less than half-an-hour. To find out if there is a flight to Pai on the day you plan to travel, visit http://wisdomairways.com.

- For more information about Pai, contact the Mae Hong Son office of the Tourism Authority of Thailand. Call 053-612-982/3, or search for TAT Maehongson on Facebook.