Where art and culture coexist
Travel

Where art and culture coexist

A visit to Bangkok's historic Charoen Krung district is a great way to fulfil your wanderlust with an abundance of street food options, hip cafes and trendy art galleries

As we're still facing travel restrictions, leaving home and lingering around the tranquil neighbourhood of Charoen Krung is the easiest way to fulfil my wanderlust without having to leave the city.

Formerly, the neighbourhood was a significant trading hub in Bangkok. It is known for its fusion of Chinese and Thai cultures along with the presence of Christian and Muslim communities, leading to the coexistence of Buddhist temples with mosques, shrines and churches to give the area a distinct multicultural feel. 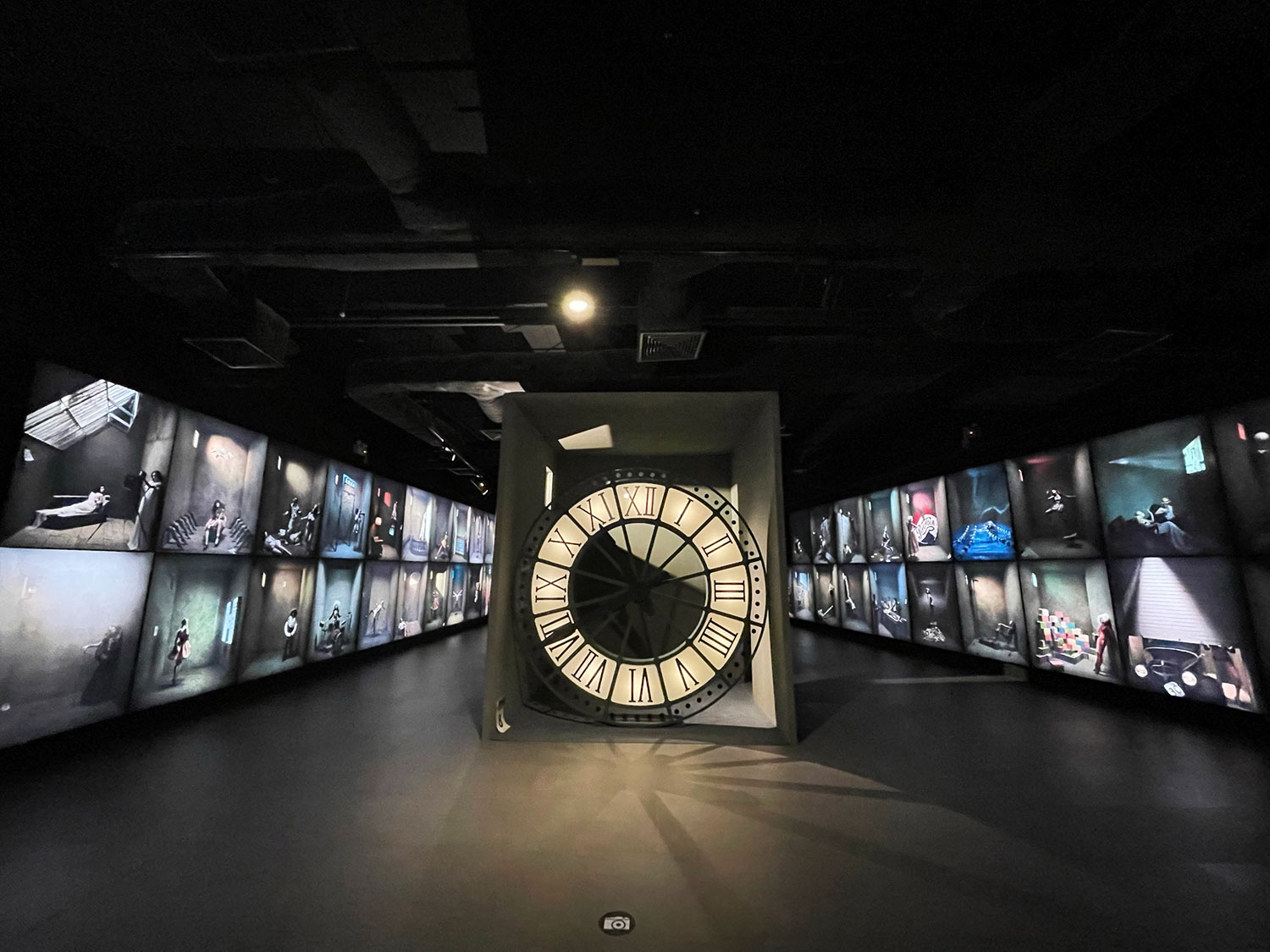 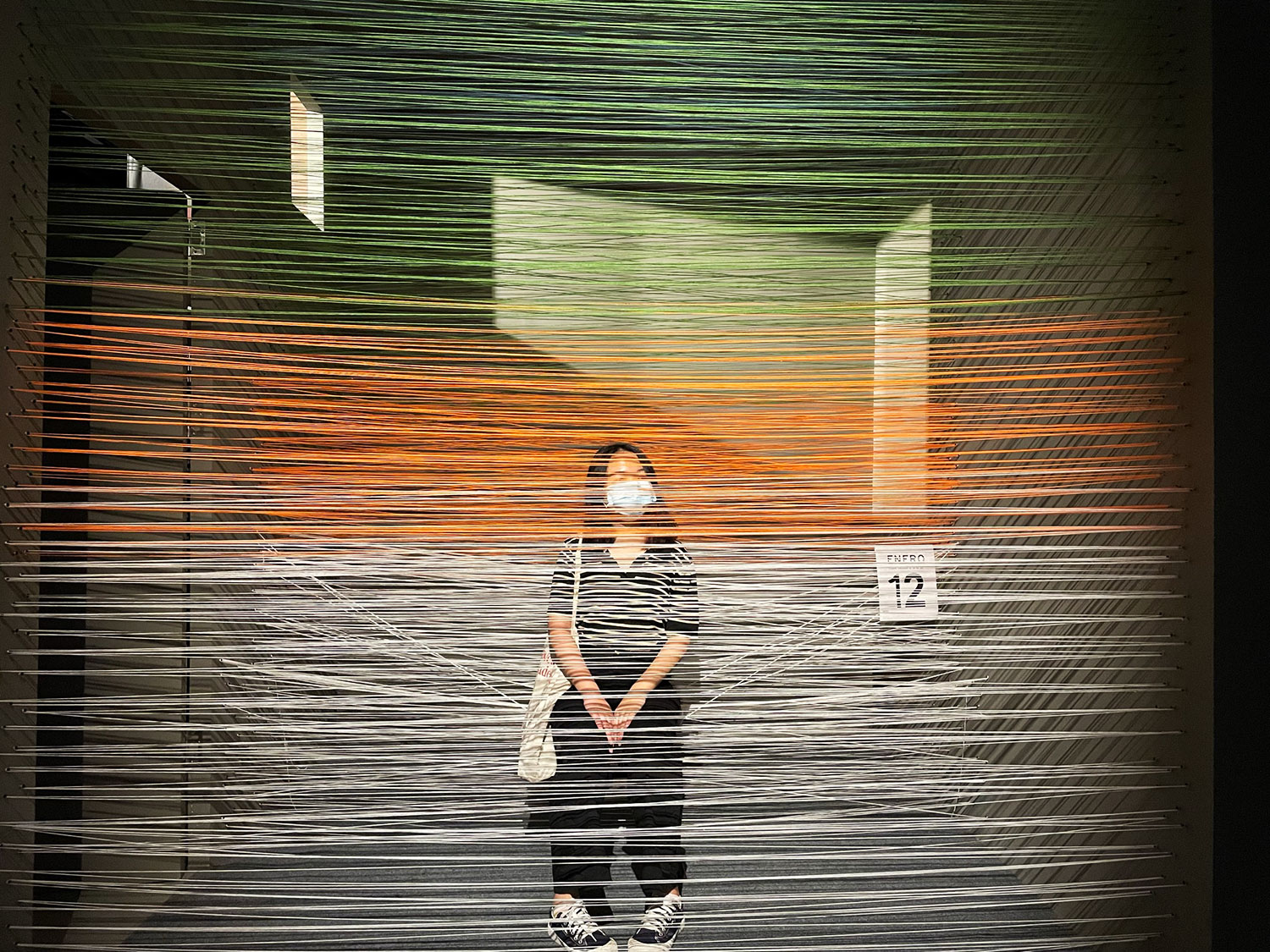 Just a stone's throw from the Sathon Pier and Saphan Taksin BTS station, visitors will be delighted with the long lines of shophouses offering traditional delicacies. For example, Prachak restaurant is famous for roasted duck and Tip kitchen is popular for its volcanic fried mussels and oysters.

After a 1km walk from that alcove of street cuisine, I find myself relaxing on a comfy sofa at Madi Bkk cafe. Located on Charoen Krung 43, this lifestyle cafe opened just three months ago and is the brainchild of two friends, Satiya Siripojanakorn and Methikan Kwanmuang, who worked with Esquire magazine and Minor International before stepping out of their comfort zone to chase their dreams.

The interior features a Scandinavian style and is based on the concept of a circle of friends, with wood furniture and white walls to create a warm and inviting ambience as if you're sitting in a friend's home. There's also a corner with lifestyle products like cotton tote bags, body lotion, soaps, saucers, caps and handmade ceramic mugs from Phayao for sale. 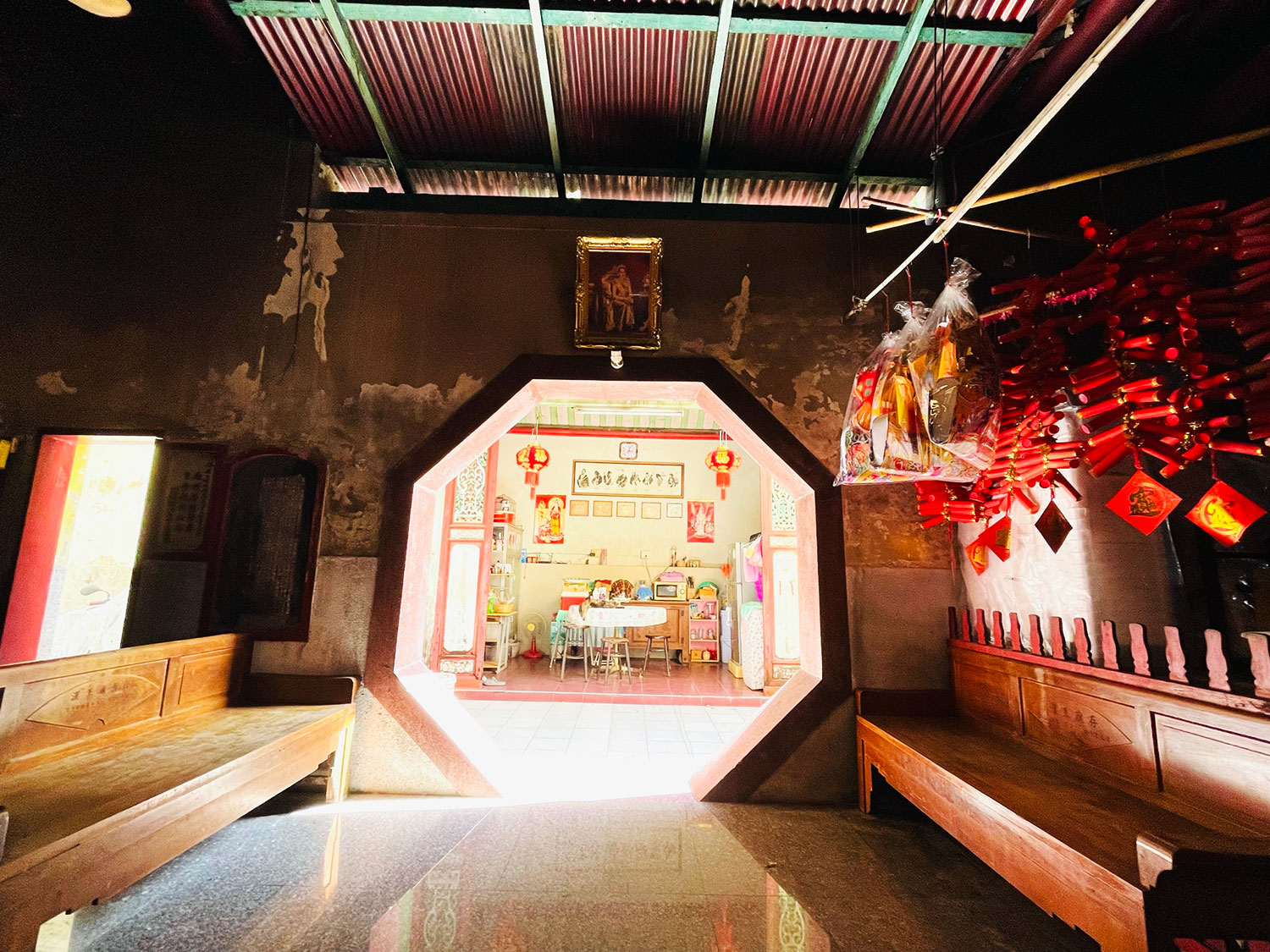 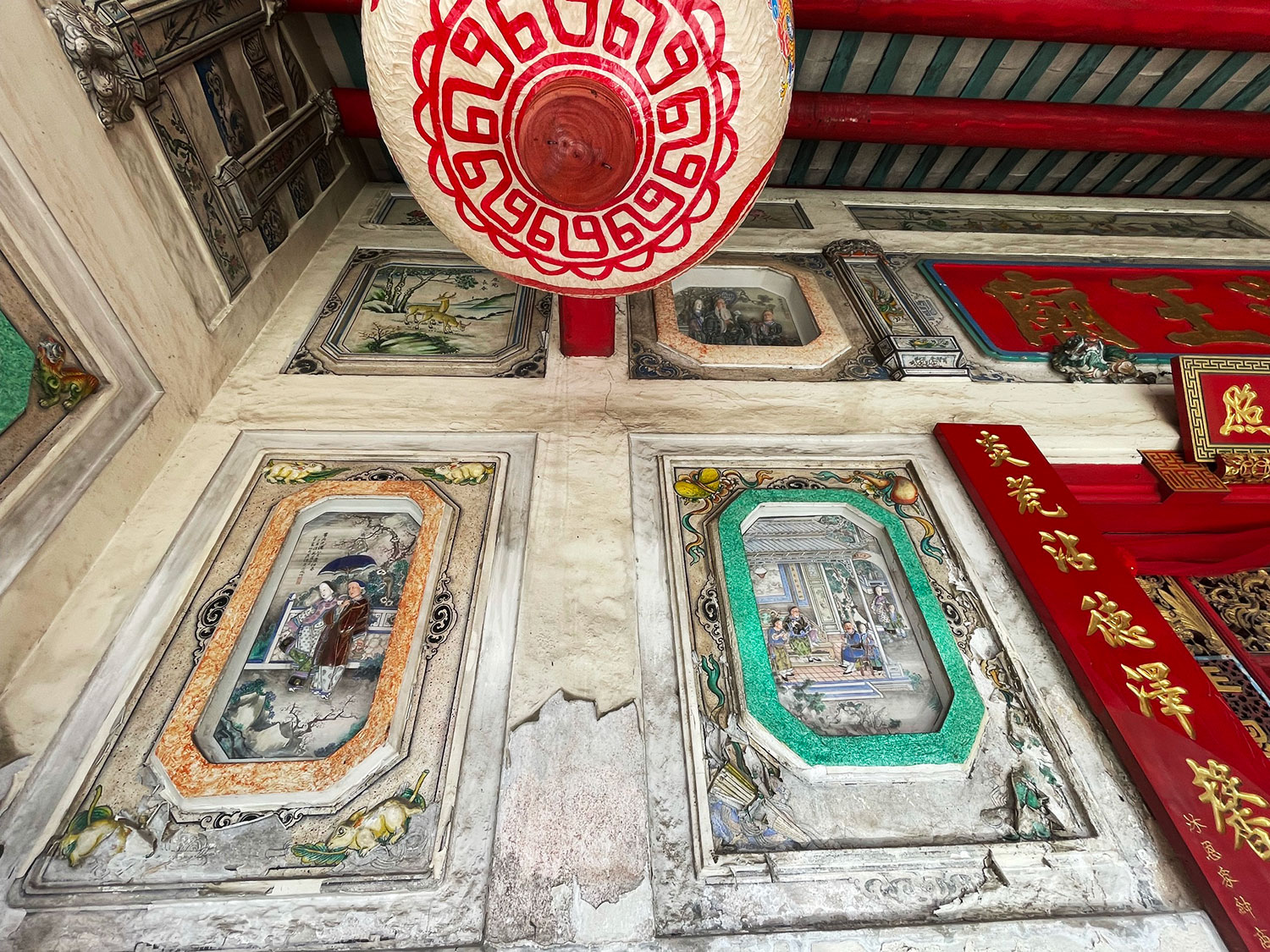 The Hon Wong Kung Shrine was built during the reign of King Rama V. It is decorated with elaborate wood carvings and murals depicting Chinese mythology and daily life.

"We love coffee and wish to share our passion with other like-minded people. We transformed an old jewellery shop into a lifestyle cafe where friends can get together and chill out. We launched our cafe while Bangkok had a dine-in ban in place, so initially our customers were only allowed to take out beverages. However, this had no impact on our business. We still had a great time because we used social media to connect with customers and they helped spread the news," Satiya said.

Pastries such as premium choc croffle, truffle mushroom pie, giant sausage pie and ham double cheese pie are also available for those looking for a light meal. The 2nd floor is a creator hub where customers will soon be able to join creative workshops, see artwork by local artists or experience a handicraft market.

After some caffeine, it's lunchtime and I head to Wuatong Pochana, which is tucked away in Charoen Krung 45. This modern Chinese restaurant uses local beef, homemade tofu, Chinese mien noodles and imported chilli from China to prepare a wide selection of Qingtao-style dishes, based on traditional recipes.

A 400m stroll from Wuatong to Si Phraya junction, Yora Bkk by famous pastry chef Saki Hoshino of the Michelin-starred restaurant 80/20 is serving seasonal ice cream, free of preservatives and sugar to brighten your day. 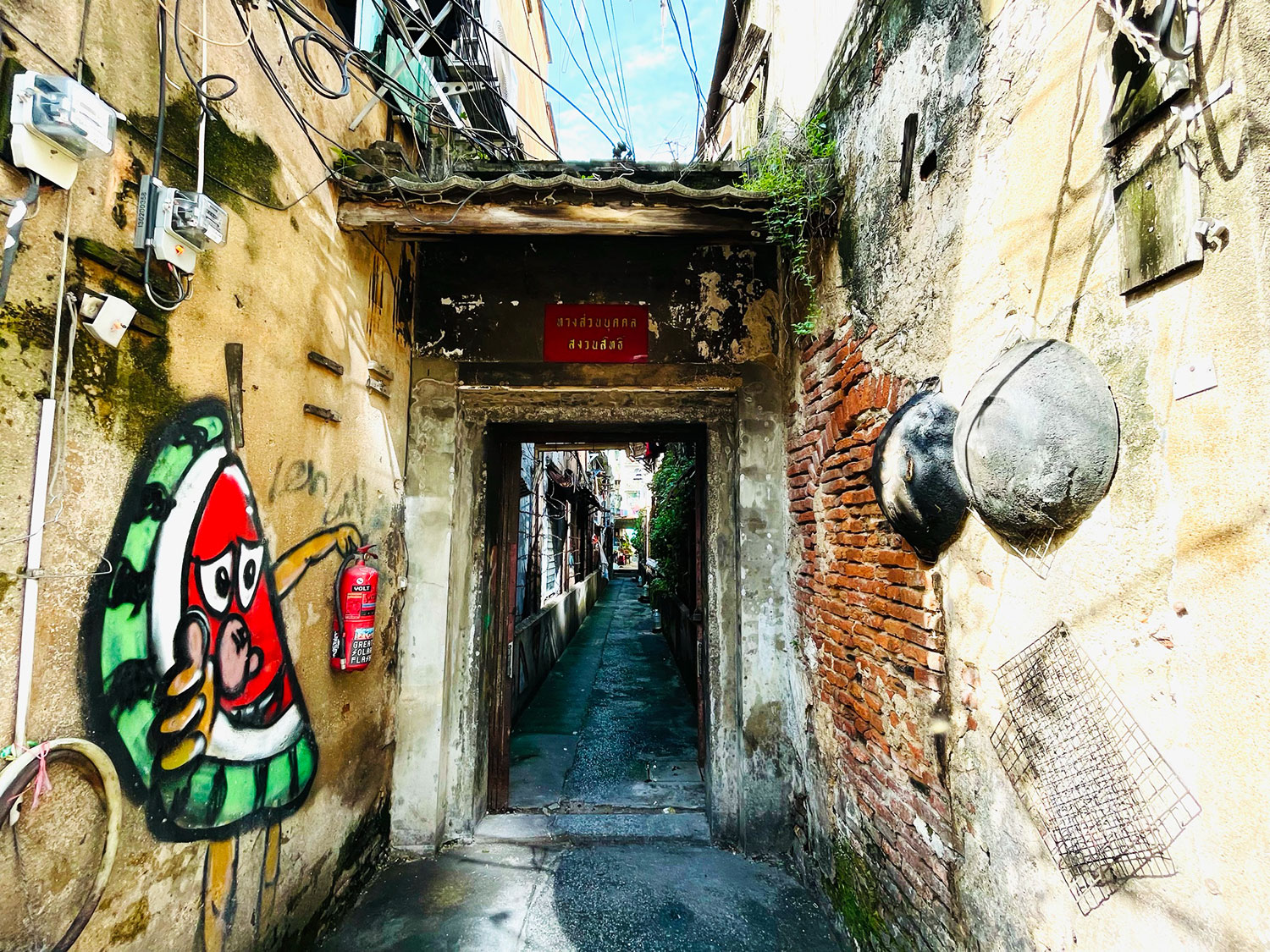 Street art brings life to some shophouses in the Talat Noi community. 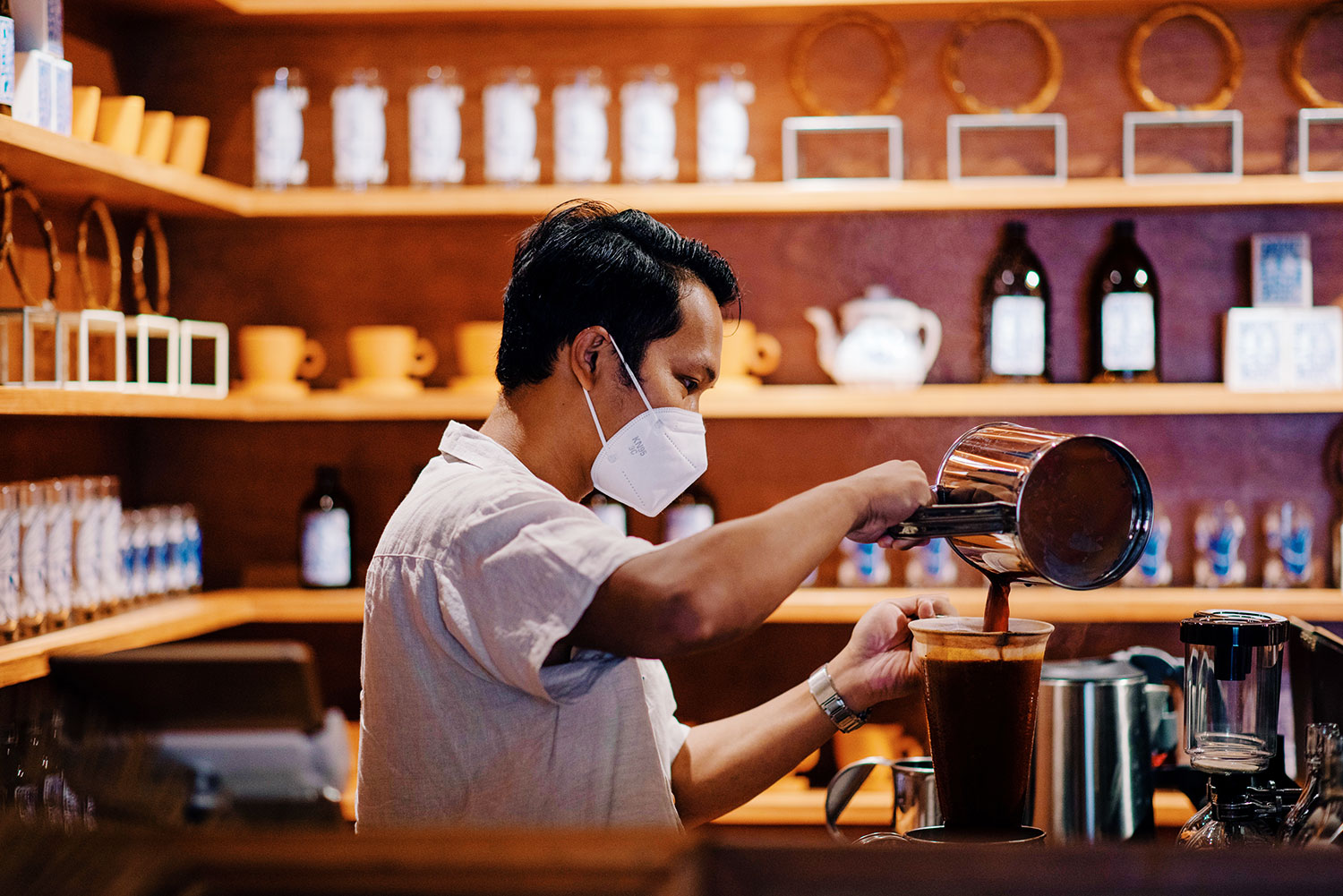 Using local and Japanese ingredients, there are nine flavours on the gelato menu including a bitter chilli rocky road, creamy coconut-palm sugar, sweet-and-sour vanilla-mulberry, sweet and salted fish sauce caramel, milk with corn flakes, sour mango with nam pla waan, matcha cookie dough and seasonal sorbet. They are priced at 89 baht and 99 baht per cup or 350 baht and 400 baht per pint.

Located 300m from Yora Bkk on Charoen Krung 30, the 333 Anywhere gallery is designed to be a stage for Thai masters and middle-aged artists to showcase their creativity. Situated in the popular art space Warehouse 30, this 300m² gallery belongs to Tharisa Vanichtheeranont. Currently, it is hosting a new ceramic exhibition titled "The Messenger Through The Twilights" by five artists -- Pim Sudhikam, Wittawat Piyachaiwut, Aor Sutthiprapha, Mo Jirachaisakul and Eiair.

On view throughout this month, visitors will be taken back to a time when earthenware recounted the way of life and helped connect the ancient and modern worlds. Apart from their obvious function, everyday utensils provide a means of communicating messages to the future generations and reflect beliefs and culture in each period. This notion is especially true of Western capitalism, which dominates the modern way of life by producing a plethora of amenities leading to rapid changes that have resulted in crises in many forms.

My walking tour continues to River City Bangkok, where Spanish fashion photographer Eugenio Recuenco's exhibition "365º" is on display until Oct 15. Located on the 2nd floor, RCB Galleria has been turned into a massive photographic studio to showcase photography, light-box installations, video and other art installations under a calendar theme. 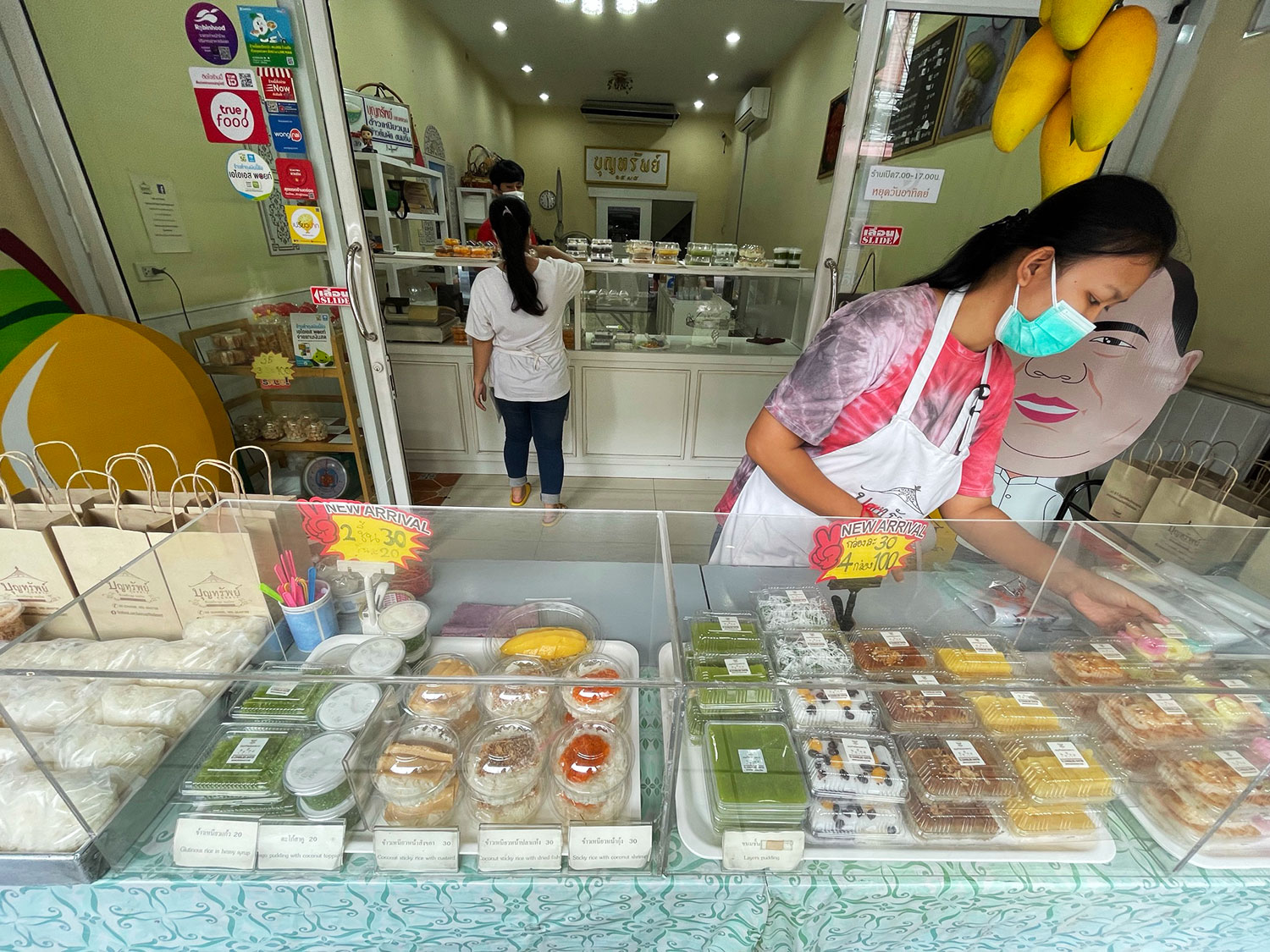 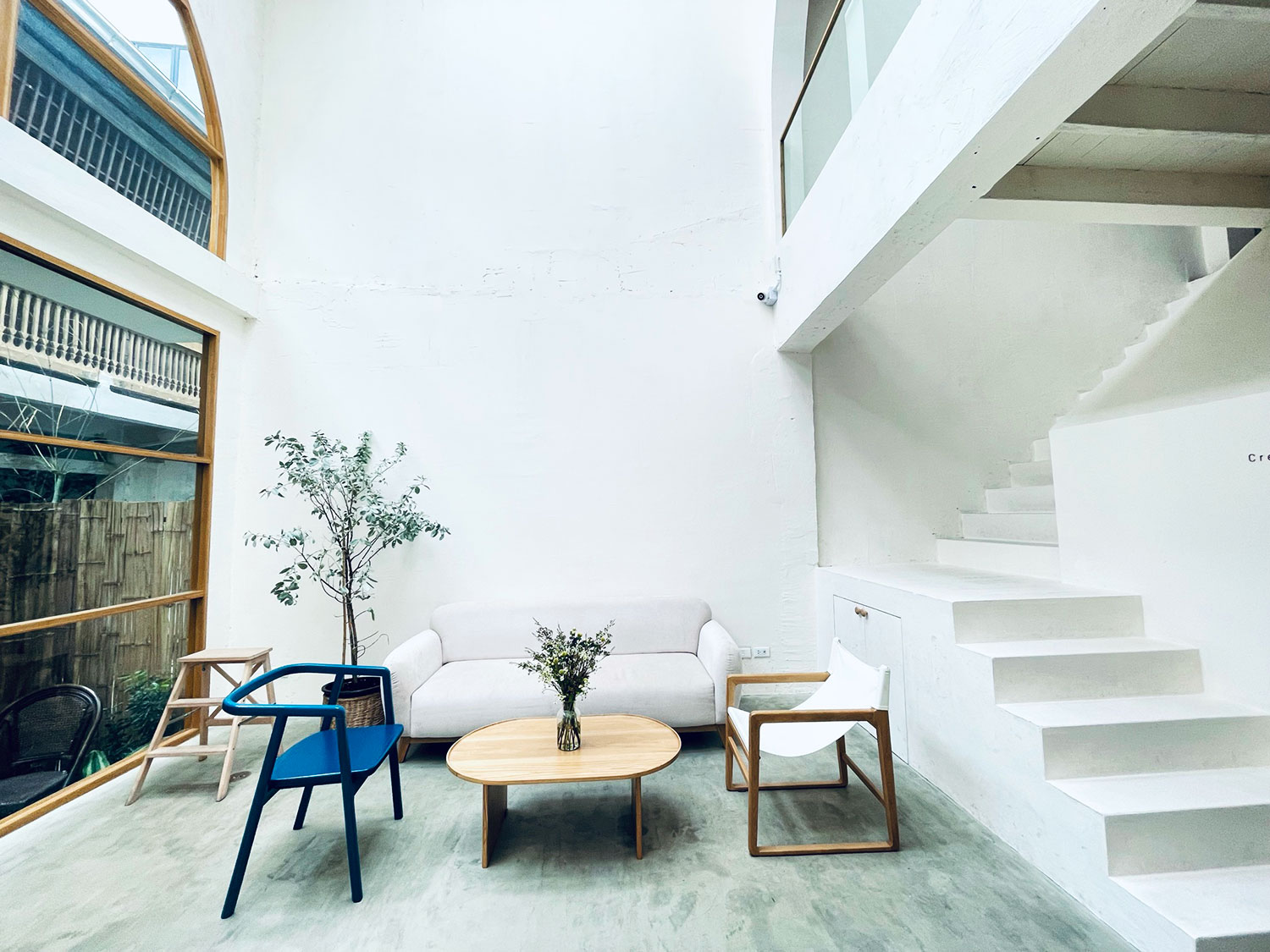 333 Anywhere gallery has a showcase of artworks by veteran and middle-aged artists. 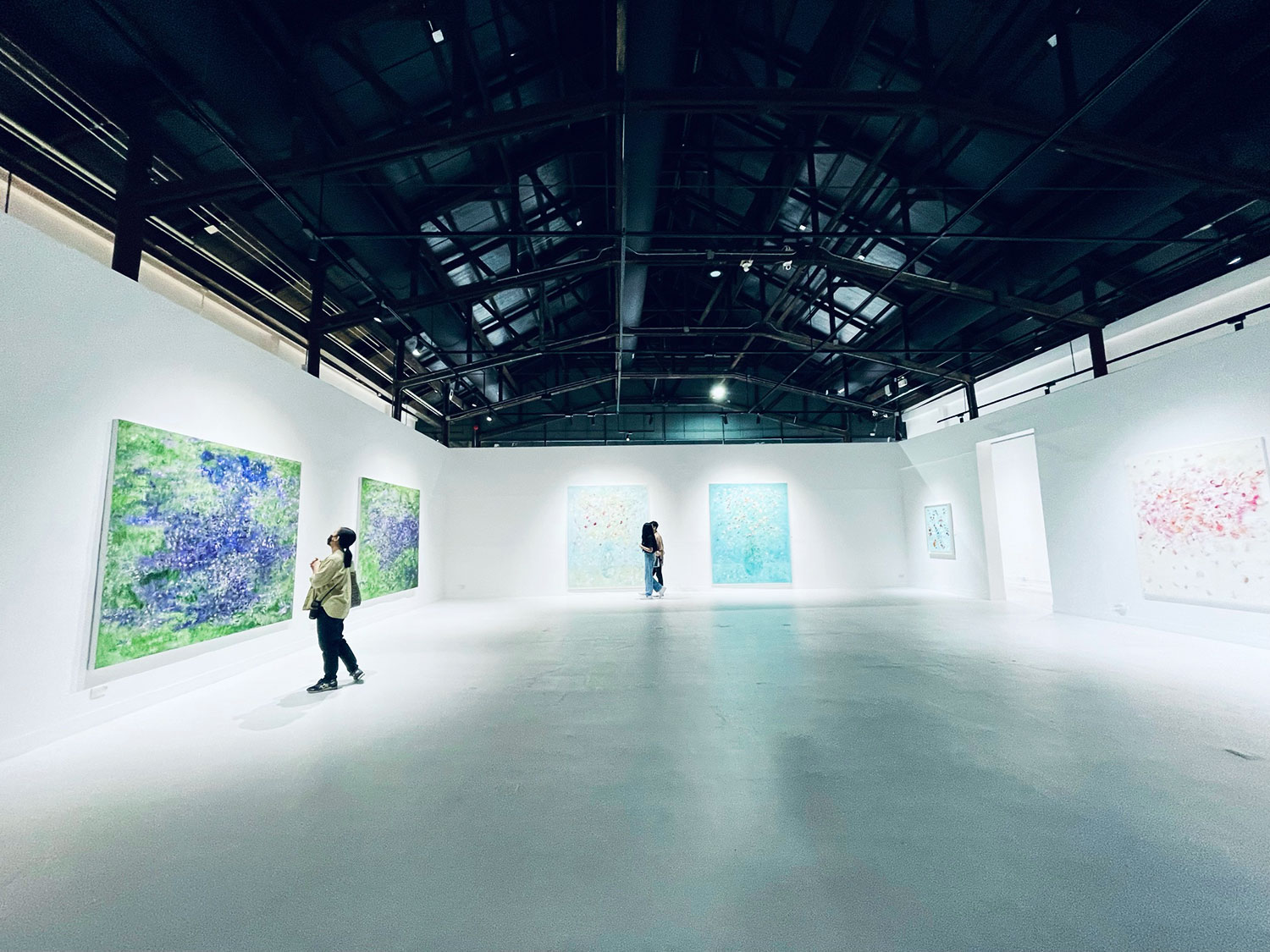 Madi Bkk is promoting itself as a creator hub.

Recuenco is based in Paris and has worked with several leading fashion brands like Loewe, Nina Ricci, Shanghai Tan, Yves Saint Laurent, Naf Naf and Mango. For this project, he spent eight years shooting a groundbreaking series of 365 images to mirror his thoughts about the world.

His exhibition travelled to many big cities such as Barcelona, Madrid, London, Valencia, Shanghai and Taipei before landing in Bangkok.

Browsing around, visitors will feel as if they are opening a calendar and travelling back in time to learn about history and the influence of art, current events, politics, disasters and mankind's achievements. For example, the photograph 1 May depicts two employees dressed in their uniforms to pay tribute to American film director Stanley Kubrick on the celebration of Labor Day. In Spanish, the labour uniform is named mono and it also means monkey -- the one seen in Kubrick's 2001: Space Odyssey.

The image 21 April portrays a woman sitting on a red throne chair adorned with white and red ribbons to mark Queen Elisabeth II's birthday. In the photograph 13 August, a German guy climbs a wall and peers over the other side as American actress Marilyn Monroe poses for a fashion shoot. This scene dates back to the day when Berlin citizens woke up and found the city divided.

Walking through Talat Noi to Soi Wanich 2, I arrive at the ancient Hon Wong Kung Shrine, which was built by Hakka migrants during the reign of King Rama V. At the entrance, its walls and ceiling boast a collection of intricate wood carvings and murals depicting Chinese mythology and daily life.

Overlooking the beautiful vistas of the Chao Phraya River, it houses a sacred statue of Hon Wong Kung brought from China as well as the Goddess of Mercy and other Chinese deities, which local residents come to pray for fortune, protection, good health and wealth.

Not far from the shrine, my journey comes an end at Citizen Tea Canteen of nowhere, which is the brainchild of talented designer Saran Yenpanya and local entrepreneur Benjapak Petchclai, who run the 56th Studio and the popular River Vibe Restaurant and Bar.

To blend with the local Chinese community, the interior design on the 1st floor is orange to represent traditional Thai milk tea and the walls are covered with silk-screened plywood with tiger, flower and Chinese alphabet motifs, while the 2nd floor is painted in green to link with a Chinese shrine.

"We aim to bring the charming culture of the Thai coffeehouse back to life. This is a cafe and handicraft showroom where customers can come enjoy tea in a relaxing atmosphere and check out the latest collection of eco-friendly apparel and home decorative items crafted by artisans from around the country," Saran said. 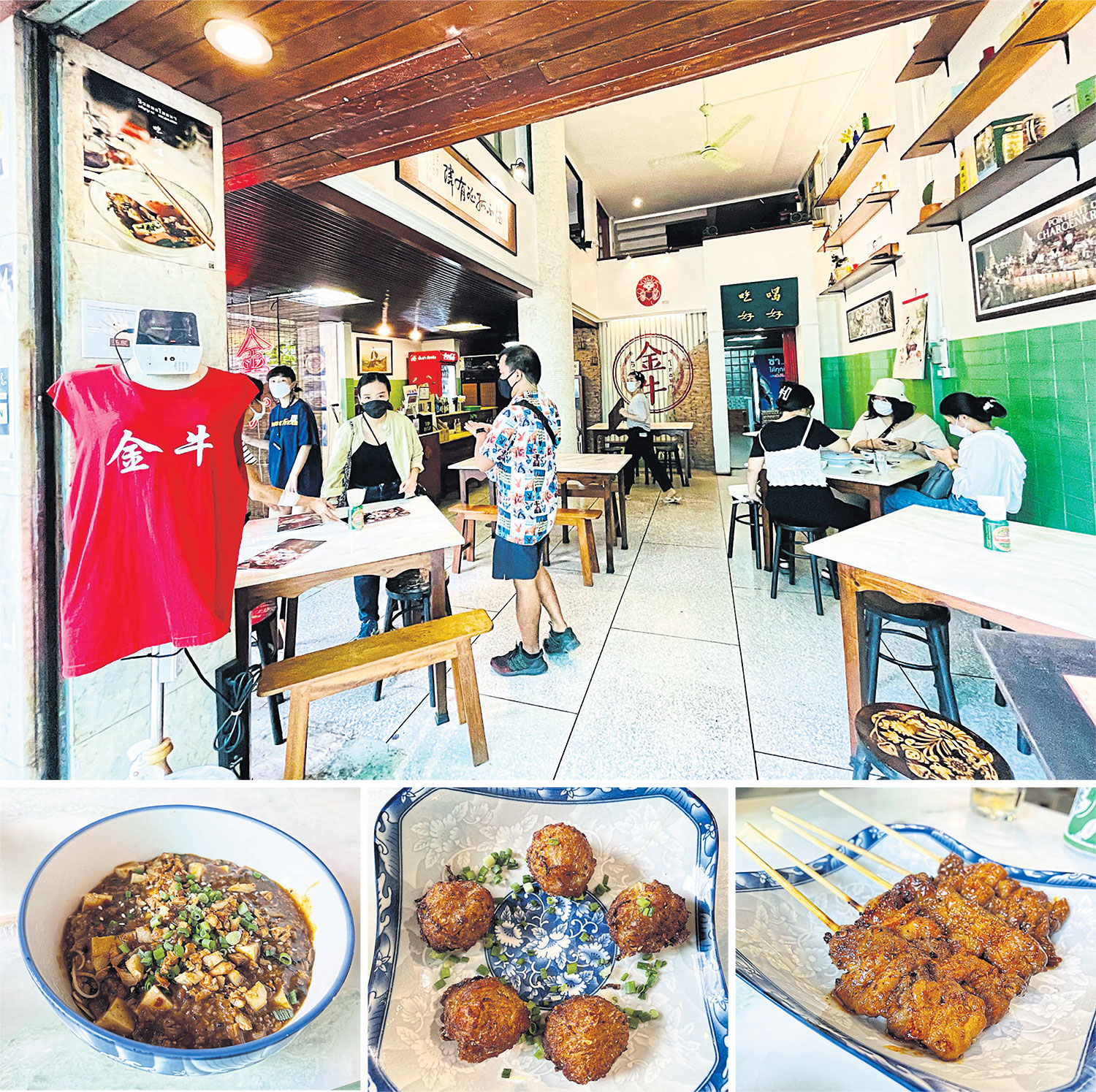