Exit through the bathroom stall

Are public restrooms a democratic space? Thai artist Thitibodee Rungteerawattananon believes so. Both a private and a shared area at the same time, toilets don't escape tacit rules of social interaction or the politics of access, representation, sex and gender imposed on other spaces.

In cultural institutions, museums or galleries, they're a third-range zone, presenting little interest to visitors beyond their utilitarian purpose. Yet, Thitibodee -- who has been working in and out of restrooms since 2006 -- sees toilets as a place for release, in the physiological and creative sense.

"Historically, many artworks came straight out of the bathroom. I'm bringing artworks back inside that space," he says regarding his ongoing "Thai Message" series -- the latest instalment of which will take place in Narathiwas 22 during the Bangkok Biennial, in the restrooms adjacent to Gallery Ver and Cartel Artspace.

Over a decade ago, regular visits to the Tate Modern in London got Thitibodee thinking about traditional Western hegemony in the art world, as he reflected on the museum's Western-centric permanent collection. Many of the artworks Thitibodee had studied in art history classes were displayed in the museum, but that included none of seminal Thai artists' productions.

"Many Thai artists would probably like to see their works exhibited alongside those of Van Gogh or Picasso," he says. That intuition became the starting point for his "Mail Art" exhibition.

In 2006, Thitibodee advertised his project in several Thai media outlets, inviting Thai artists to send their works through postal mail to London. With the help of a team, he then smuggled the works, guerrilla-style, into the Tate Modern and held an exhibition of Thai artists in its male restrooms, complete with captions and wall text. The works by over a dozen Thai artists remained in the Tate Modern bathroom until the museum's management was alerted a couple of days later, he said.

"Never before had I felt so strongly that I came from a third-world country," he adds. In the museum space, the bathroom symbolises that peripheric area.

After returning to Thailand from London and New York, Thitibodee faced new challenges. Invited by the Bangkok Art and Culture Centre to hold an exhibition, he saw his show cancelled due to funding issues. While the formal introduction of his disruptive practice into institutional spaces raises questions regarding whether such work still retains its original impact, the course of events demonstrated that the tension between traditional and unsanctioned exhibition spaces endures.

Three years ago, Chulalongkorn University's now-defunct art centre planned to host Thitibodee's "Thai Message" exhibition. Only, after he installed the artworks in the bathrooms -- as well as interchanged the male and female bathrooms signs -- he found that the staff had brought them back to their main exhibition rooms.

"The reason why I was so keen about bringing my work back to Thailand was to question local art institutions and art spaces," he says. "Thai Message is based on a process. But do you consider this process as an artistic practice?"

While the exhibition concept and works were purchased by the MAIIAM Museum of Contemporary Art in Chiang Mai, Thitibodee continues to disrupt art spaces abroad -- his recent gigs included placarding Thai art works in Jogjakarta and at several venues of the Sydney Biennale this year.

On Aug 11, "Thai Message" will have a third exhibition at the N22 art complex with new participants. The galleries' shared restrooms shall act as a safe space for expression, especially in light of the current military regime, as well as for negotiation with established art galleries, Thitibodee says.

"Not every Thai artist can get their works on the walls at Gallery Ver, but they can invest in its restrooms." 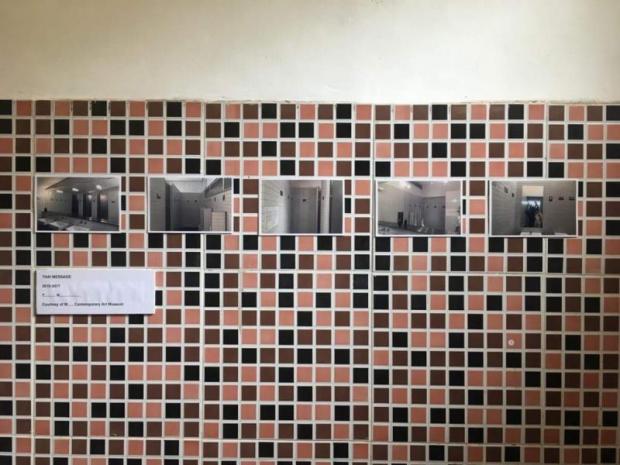 Thitibodee brought Thai artists' works to the restrooms at the Jogjakarta National Museum this year. photograph courtesy of the artist 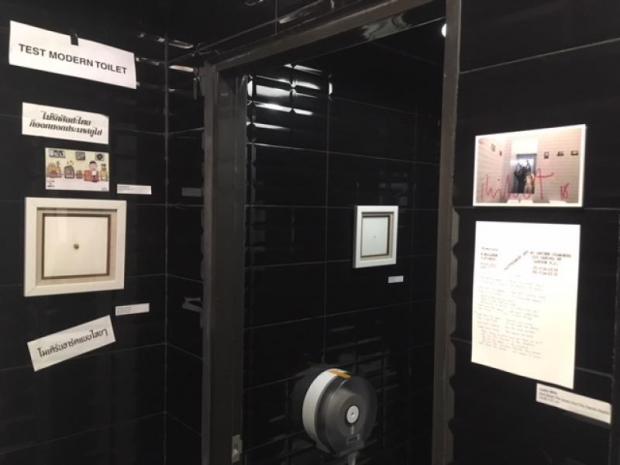 New works from Thai artists taking part in the 'Thai Message' exhibition in the restrooms at Gallery Ver in Bangkok. Photos courtesy of Thitibodee Rungteerwaattananon