published : 3 May 2021 at 04:30
newspaper section: Life
writer: Apinan Poshyananda
Opening ceremony of the OCAC's Art Collection on March 19 at the Ratchadamnoen Contemporary Art Centre in Bangkok.

At the recent ribbon-cutting ceremony of the Office of Contemporary Art and Culture's (OCAC) Art Collection in the spacious art hall on Ratchadamnoen Avenue, a group of ageing male artists covered in sanitary masks surrounded the director of OCAC, Vimolluck Chuchart, who gave a self-congratulatory speech. She proudly announced that the public will be able to view for the first time the national collection of the Ministry of Culture's contemporary Thai art. Beside these elderlies stood a white giant fibreglass sculpture by Sutee Kunavichyanont in Thai military uniform wearing a helmet with a rifle erect. Sutee's Equality; Thai Soldier (2016) is inspired by the cultural mandates between 1939 and 1942 during the premiere of Phibul Songkhram that aimed to uplift the national spirit and moral code of the nation and instil progressive tendencies and newness into Thai life.

Together, the statue of the soldier and the male artists signified the patriarchal message of power, obedience and propaganda that can be linked from the time of Phibul to the present. During the 1930s-40s, Phibul's government with grandiose cultural projects by Luang Wichit Wathakarn utilised art inspired by Adolf Hitler, Joseph Goebbels and Benito Mussolini to make Thai art serve the propagandistic policy of the government. Phibul and Luang Wichit would have been proud of these civil servant artists who have kept the tradition of art as tools of manipulation and coercion.

The day after the opening of the OCAC's art collection, clashes between police and pro-democracy demonstrators took place on Ratchadamnoen Avenue that resulted in tear gas to disperse the crowds and burning of objects at the Siyak Khokwua intersection. With regular political activities near Democracy Monument, the exhibition of OCAC's collection seems disconnected from reality and reflect little on the zeitgeist of current contemporary Thai art.

How much can we learn from OCAC's Art Collection? The display comprises more than 100 artworks collected over 17 years with a budget of over 200 million baht. Spread across two floors of an early modern style building with a high ceiling built in the late 1930s at the time of the Phibul government, the exhibition contains works by national artists, mid-career artists and a few female artists. 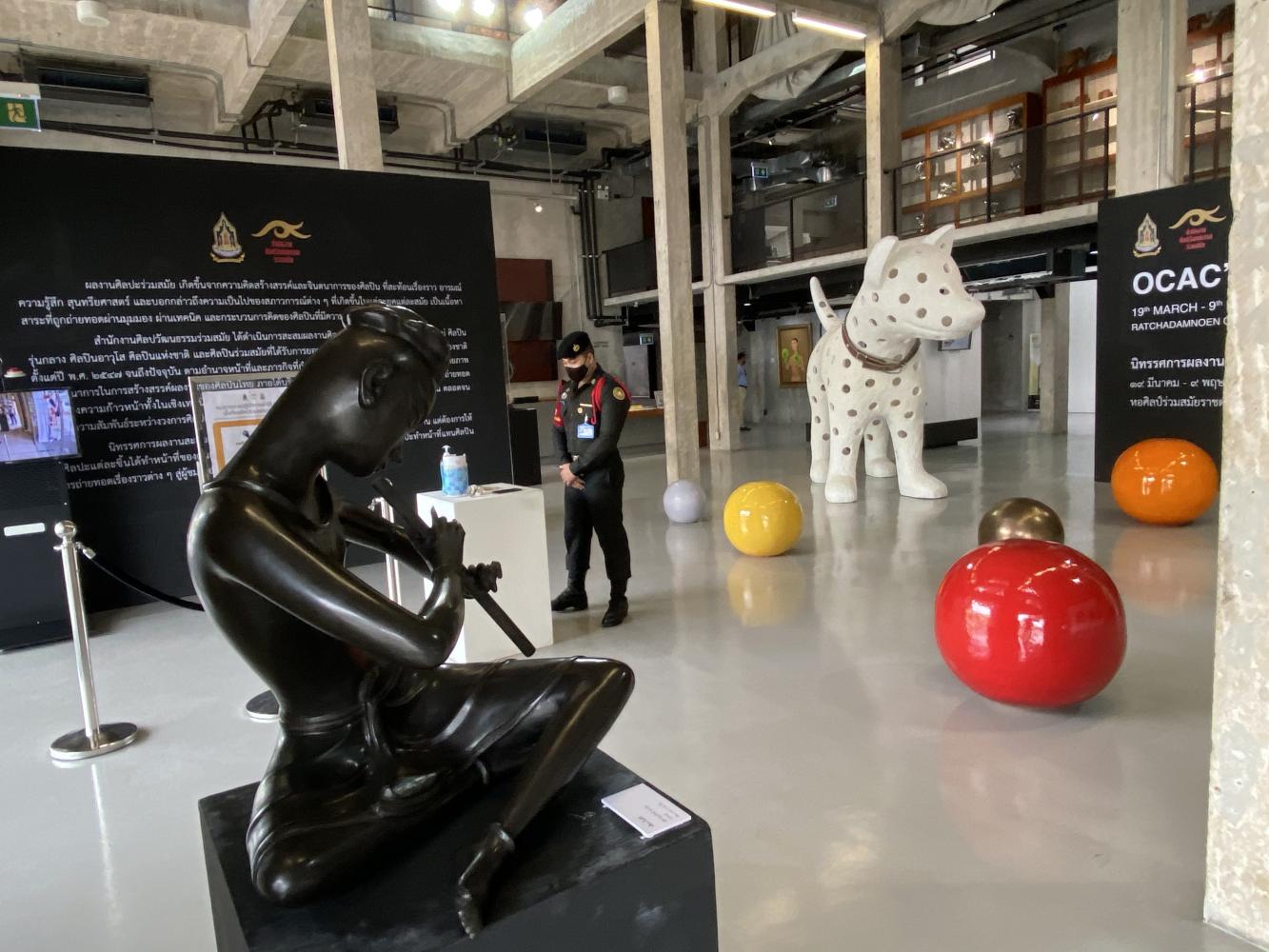 Artwork in the OCAC's collection on display. Photos Courtesy of Prof Apinan Poshyananda

Overemphasis is placed on the echelon of National Artists dominated by male members whose works are already in the collections of the National Gallery of Art, Silpa Bhirasri Memorial Museum and Supreme Artist Gallery of Ministry of Culture. Evidently, the policy of acquisition is based on seniority of artists, many of whom are alumni or teaching at the Faculty of Painting, Sculpture and Prints, Silpakorn University and Bandit Patthanasilp Institute, Ministry of Culture. Inevitably, the mood and tone of OCAC's Art Collection is about homogenous and aesthetically pleasing artworks that praise Thainess in various forms and subjects.

As published in the OCAC's statement that the intention is not to display Thai contemporary art in chronology but instead emphasise the artistic quality of the artwork. Sadly, with a lack of a sociopolitical context, the exhibition offers no trajectories and shifting paradigms in the history of contemporary Thai art. For the OCAC, Thai art is seen as a linear cultural development through comfort zones stemming from the time that art played a pivotal role in serving the junta government in the 1930s and 40s to the present time of the post-junta government of Prayut Chan-o-cha. Missing are artworks that demarcate times of turmoil during the October 1973 and 1976 student uprisings, Black May massacre, Tom Yum Kung syndrome, clashes of Red Shirts and Yellow Shirts, the burning of Bangkok and coup d'etats in 2006 and 2014. 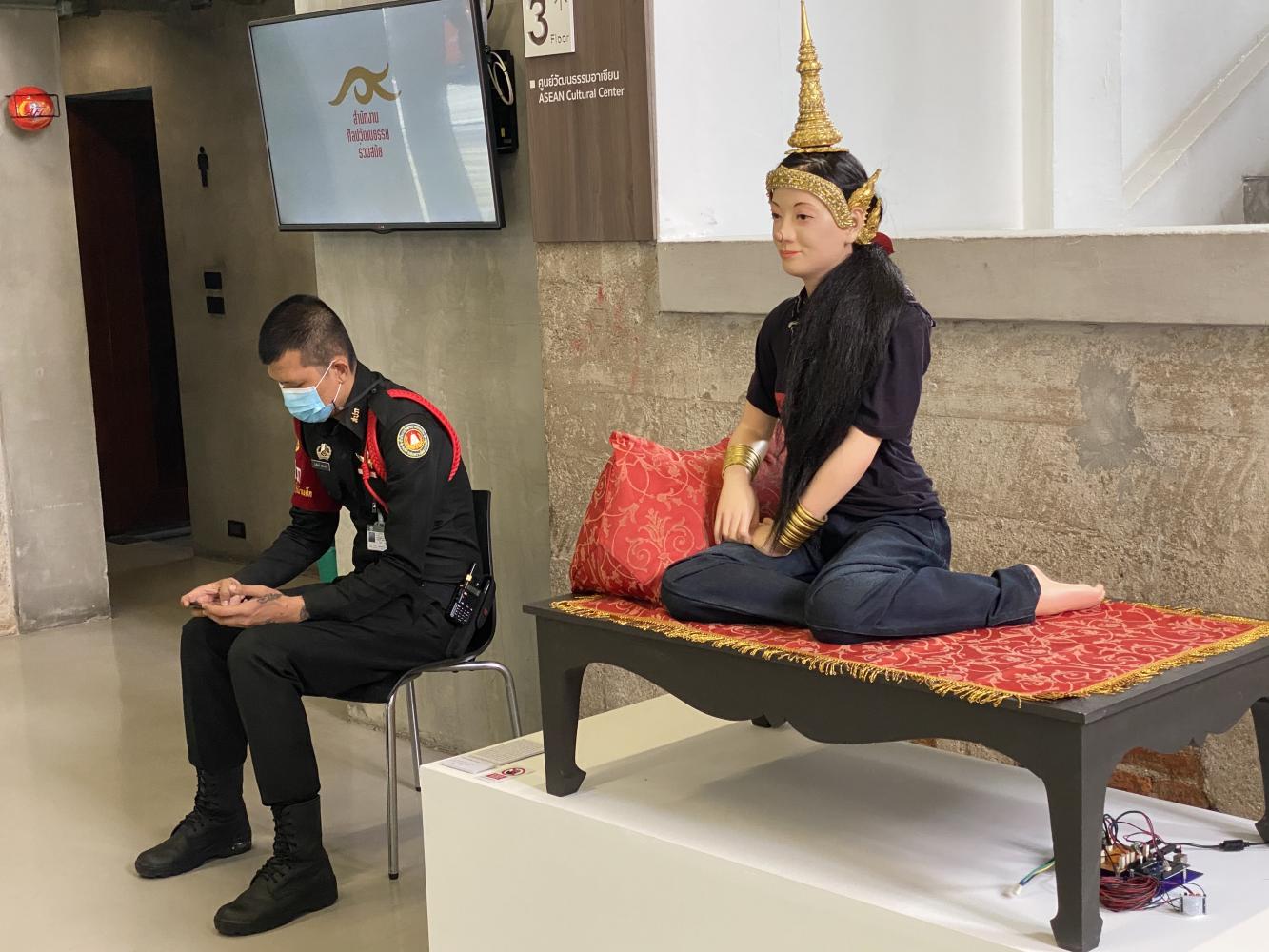 From the OCAC's Art Collection presently on display until May 9, evidently, there is a shortage of research and curatorial contribution to elucidate the audience on the development of contemporary Thai art. The lavish catalogue with a focus on paintings and prints gives an askew view lacking in chronology, trajectories of art movements and turning points in sociopolitical and outside influences that impact contemporary Thai art.

Astonishingly, there is no attempt to draw comparisons with contemporary Thai art with neighbouring countries such as Indonesia, the Philippines, Vietnam, Singapore in terms of regional art, search for nationalism and indigenous art, collaborative art, performance art and social activism. In fact, OCAC's Art Collection is designed to serve a Thai-centric discourse under the rubric of nation, Buddhism and monarchy. Artists and art practice critical of the government and its cultural mandates are deemed to be marginalised and excluded. Thai-centrism reaches the point that information, exhibition wall texts, catalogue, labels and signage are all in the Thai language. There is no attempt to translate Thai content into English resulting in foreign viewers being totally confused by OCAC's Art Collection. Such naivety and ethnocentricity from the OCAC's curators should be taken with serious attention.

In the exhibition, representations of Thainess under categories of Thai tradition, locality, religion and nationalism demonstrate positive values of Thai ways of life. For example, Kamol Tassananchalee's Praise The King (2016) is a free-standing stainless-steel sculpture with inscriptions of the national song that reveres the monarchy. In contrast, Nipan Oranniwesana's Duay Thai Luan Mhai (2010) depicts lyrics on perforated paper of the national anthem that monotonously repeat line after line. However, a few works reflect glimpses of suppression and turmoil. In Flag: Religion, Power (1992) by Kanya Charoensupkul, blue, red, white paint are smeared and scratched as symbolic gestures of frustration and violence during political clashes. Rirkrit Tiravanija Untitled (Camouflaged Legs) (2018) is a collage of newspaper political headlines with stamps of army boots. Vasan Sithiket's We Eat Their Shit (2002) is a rare work in OCAC's collection that reflects Thai reactions against imperialism as the man is seen devouring excretions of neo-colonial invaders. Wantanee Siripattananuntakul's Watanocchiobot'09 (2009) is an interactive and satirical work about the infatuation of Thainess. Seated with neatly folded legs, the fibreglass mannequin of the smiling artist wears a gilded Thai headdress and golden bracelets. By sensor interaction, her nose grows like Pinocchio's. For Wantanee, the fake Thai smile can be full of lies and hypocrisy that is part of the cultural promotion and manipulation of Thainess. 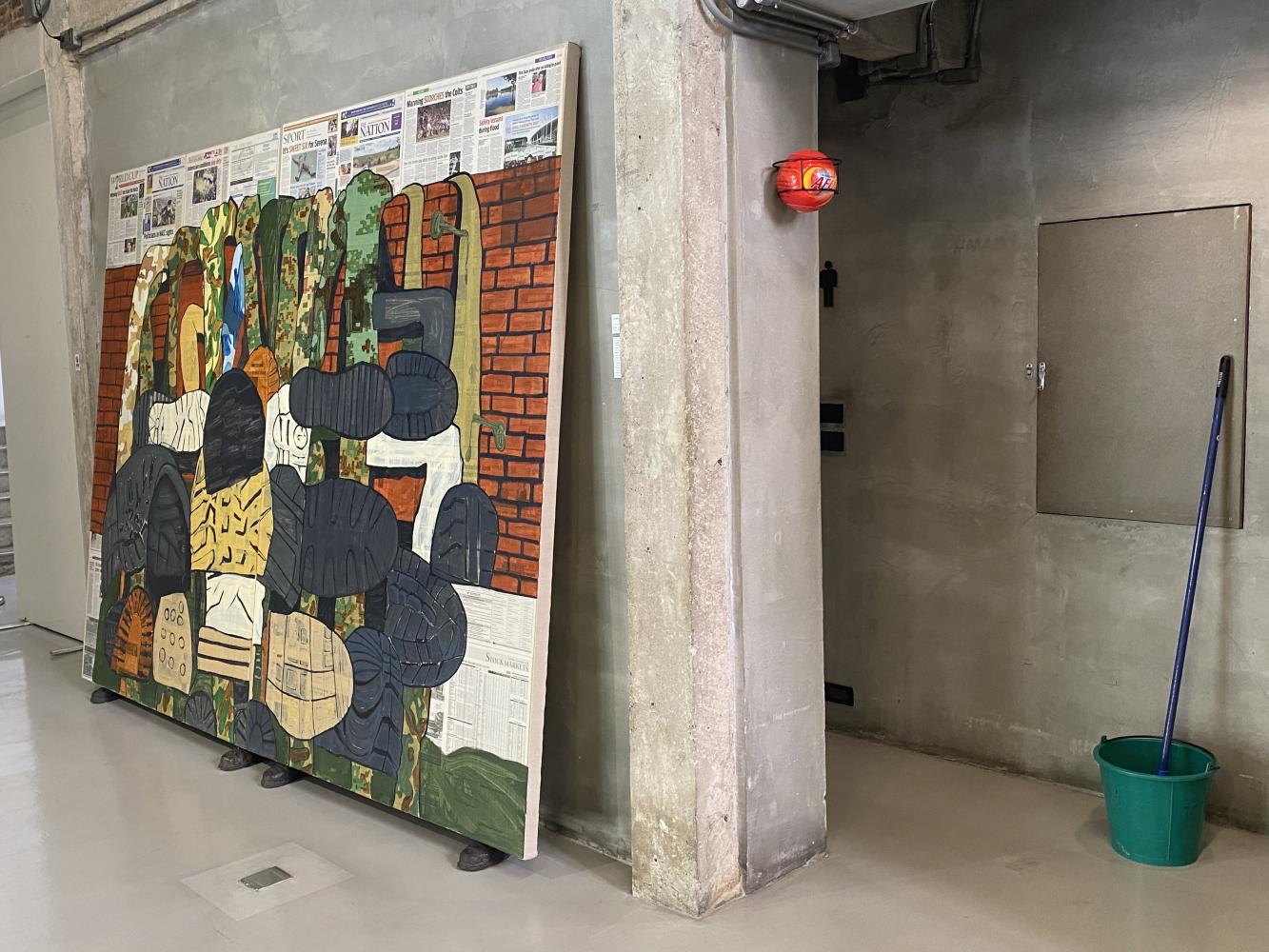 All through the exhibition, there is an overall mood of detachment and disconnection lacking in dynamism as artworks are randomly placed with no thematic sinews. Disconcertingly, works by Montein Boonma and Rirkrit Tiravanija, two of the most prominent and influential contemporary Asian artists, are relegated along the dimly lit corridor. Montien's sketch of his famous lung installation is tucked away by the corner in dark space. Rirkrit's work of camouflage uniform and army boots is placed by the entrance of men-women toilets. Perhaps, the curators who hung the work were afraid that this mixed-media work may cause offence to the military. Golden Teardrop (2013) by Arin Rungjaeng is an installation that requires an enclosed space with specific lighting. Instead, by placing it with no partitions the outcome is weak with distractions from exterior light and sound.

Much is to be desired as viewers discover that many of the best artworks in the OCAC collection are not included in the exhibition. To name the few are Fua Haribhitak's Japanese Intern Camp, Purana Quila, Deoli (1943-45), an extremely precious and rare tempera painting executed during his imprisonment during World War II in India. 246247596248914102516 And Then There Were None (2017) by Arin Rungjaeng exhibited at Documenta 14, Kassel, Germany. Arin's replica of the bas-relief of revolutionary soldiers at the Democracy Monument together with the video that traced the events of Prasas Chuthin, the Thai ambassador to Germany during World War II, who was the last person to visit Hitler before his death. Notably, Prasas was among the members of the Khana Ratsadon Party that overthrew the absolute monarchy in 1932. Arin's installation would offer a fascinating comparison to the original sculptures inspired by fascist art designed by Corrado Feroci (Silpa Bhirasri) at the nearby Democracy Monument. When asked why this important installation has not been included. The answer from OCAC official was that "the work is too heavy to install".

Clearly, there is a poor acquisition policy by the OCAC that relies on elitist and mostly elderly male members of the acquisition committee whose artworks are also in the OCAC's Art Collection. With recent disgruntled noises and allegations from various art sectors regarding the OCAC's acquisition process and its lack of transparency, there are many issues that need to be urgently addressed. When the OCAC announced on its website this year's acquisition list of artists, titles of artworks and fees, there was widespread outcry and discontent concerning choices of selection and overpay for some artworks. The list was promptly taken down from the website as the OCAC's director reassured the public that the acquisition process was fair and transparent. 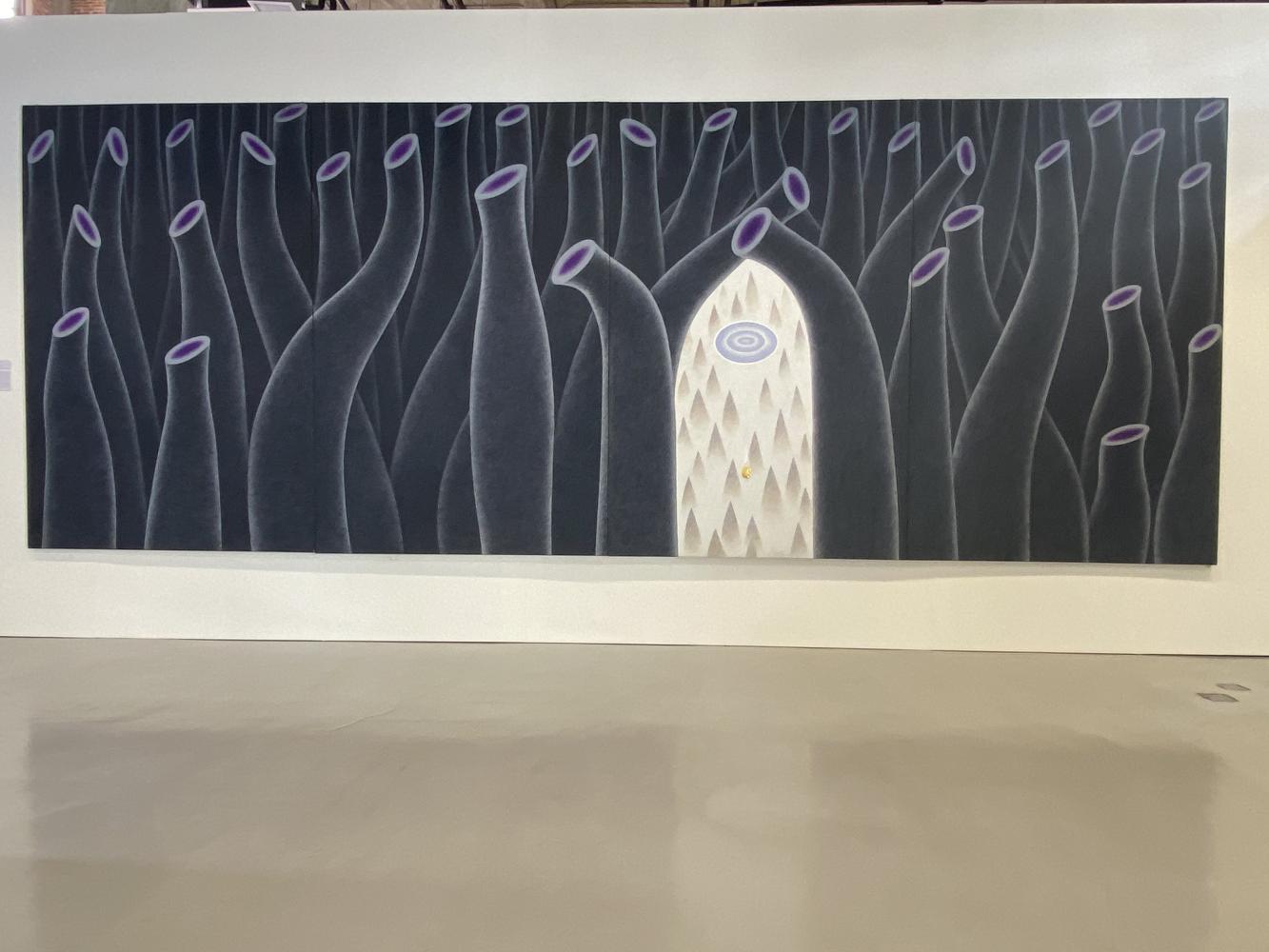 The Thai art ecosystem continues to be frustrated by an increasing communication gap between OCAC officials and stakeholders of the Thai art scene. In particular, Alongkorn Lorwatthana and Tawatchai Somkhong, whose three overpriced artworks amounting to over 7 million baht were acquired by the OCAC. Questions have been raised whether Alongkorn and Tawatchai are important enough to have their paintings featured in OCAC's collection. Instead, eyebrows have been raised about why there are no works by recognised painters such as Chalermchai Kositpipat, Chakrabhand Posayakrit, Somyot Hananuntasuk and Thaiwijit Puengkasemsomboon. Tawatchai Somkhong who is hired as publisher-curator by the OCAC, has served on the acquisition committee as well as curator for the Thai Pavilion for Venice Biennale in 2017, which caused protests and uproar among Thai artists. It was an embarrassment and discrimination by the OCAC to select a below standard international show by artists Panya Vijinthanasarn, Somsak Chowtadapong and Krit Ngamsom curated by Tawatchai. In addition, he is part of the OCAC's curatorial team of this year's Thailand (Korat) Biennale. In the local art scene, Tawatchai is better known for his role as an art dealer and publisher more than an artist and curator. His experience at the international level is limited. As a result, the director and advisers of the OCAC have continuously faced scrutiny and demand for explanations from the public concerning favouritism, code of ethics and conflicts of interest.

A lack of professionalism and code of ethics together with an unclear acquisition policy has brought the OCAC to a critical crossroads. Like a headless body, the OCAC moves aimlessly with no direction in contradiction with the grandiose strategic plan, 2020-2022, announced by Culture Minister Itthipol Kunplome to upgrade contemporary Thai art on the international stage equipped with big data, creative economy and the most ambitious contemporary art museum in the region.

A marvellous installation by Sakarin Krua-On, The Last Stag (2017) is displayed on an ornately Louis XV-style table. It features the decapitated stuffed head of a stag (extinct species Cervus schomburgki) interpreted by Sakarin as symbolic of imperialism and hegemony. The glass, lifeless eyes of the horned animal stare blankly at viewers. The bodiless dead deer can be compared to the deadwood of the OCAC in urgent need of revival and resuscitation. After all, the unfinished megaproject of the contemporary art museum at the Ministry of Culture, Ratchadabhisek Road, to house these artworks has cost millions of baht of taxpayers' money but yet to be opened after more than a decade of construction. 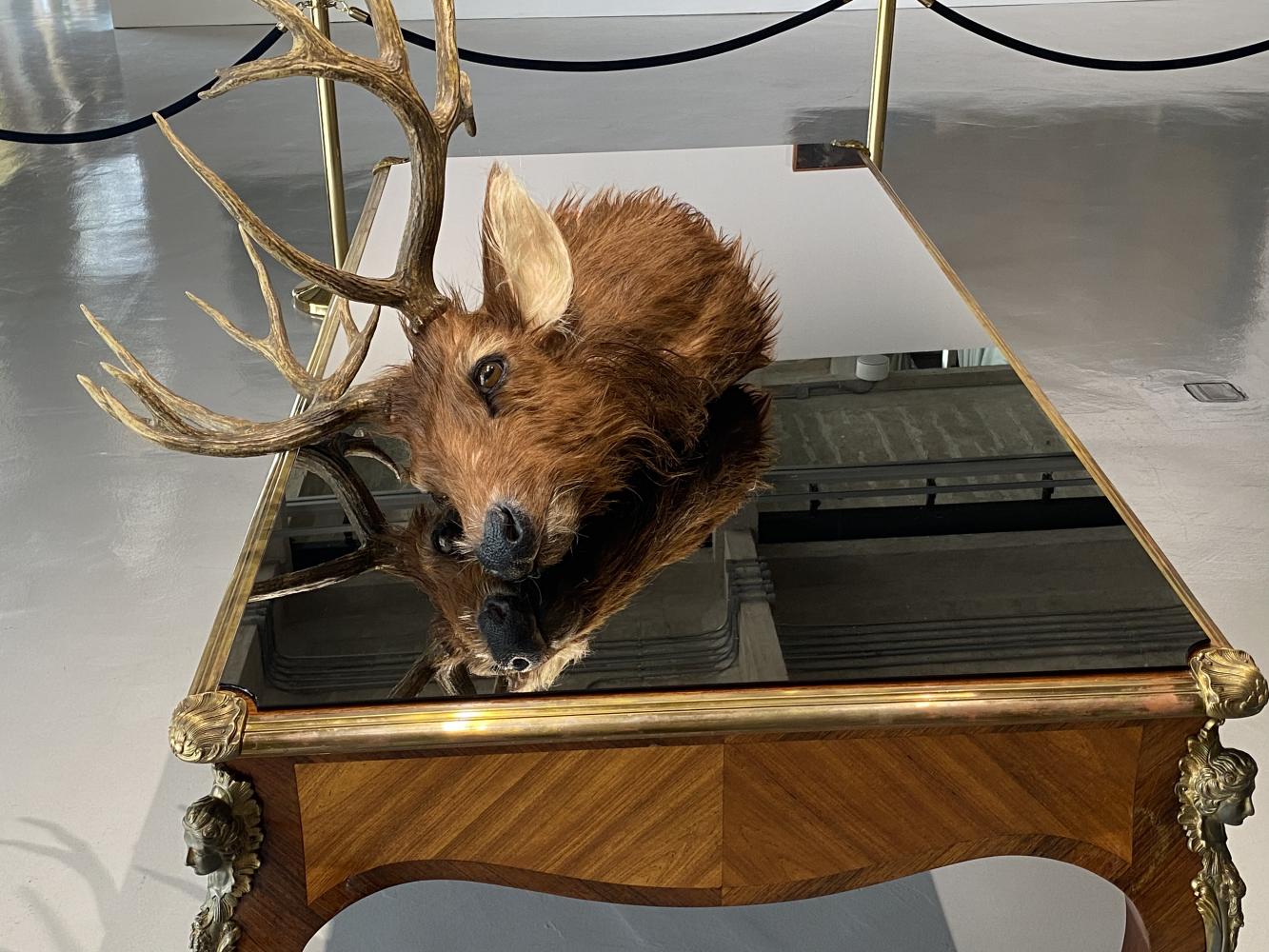