In her smoky evocation of lost love, vintage romance and bewitching cello music, Madonna, at the helm of W.E., channelled Wong Kar-wai of the early millennium, doing that visual serenade of beautiful, distressing women who're in the mood for love. Wong sculpted melancholia out of gorgeous haze; Madonna's swirl of luxury and grainy jump-cuts merely drift, and then land somewhat in emptiness. Re-telling the story of "the greatest romance of the century" _ the one between Prince Edward and Wallis Simpson _ the Material Girl also gives us a story of a wife who's in the desperate mood for pregnancy. So much so that the effort crosses over from beautiful and tender to obsessive and self-sabotaging. 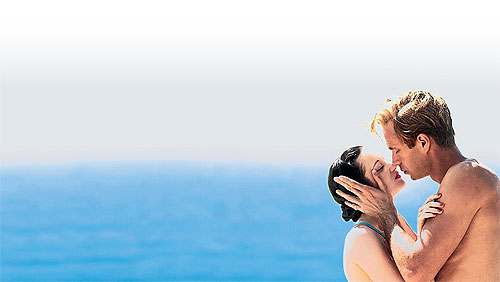 Still, the best thing about W.E. is its dreamy glamour. Madonna milks every frill, every starched pleat, every pre-World War II splendour, and serves it up as a saturated fantasy for us to get drunk on. There are two parallel stories from two different eras. In present-day Manhattan, Wally Winthrop (Abbie Cornish) endures a loveless, sexless, childless marriage and seeks refuge in the pre-auction show of glittering memorabilia that once belonged to Wallis Simpson and Prince Edward. That so-called "romance of the century" between W and E _ the throne-rocking infatuation that prompted the crown prince of England to abdicate and go away with the American widow from Baltimore many years his senior _ is the film's second story, and it carries more emotional weight mainly because of Andrea Riseborough's turn as Wally.

The sidebar scandal much-seen in The King's Speech receives its red-carpet treatment here (Prince Edward was the brother of the stuttering King George VI). Madonna and her co-writer, Alek Keshishian, unblinkingly take the side of the runaway couple by portraying Wallis as a misunderstood, unfairly hated figure wronged by popular history. That's the extent of feminism the film professes; and detractors would easily describe the whole thing as an apologia for a playboy prince and his manipulative lover. Madonna seems to be sincerely taken by the Wallis-Edward legendary love, but by swooning over it with the fictitious, awkward suffering of a Manhattan socialite who at the end finds her own fairy-tale amour with a security guard/intellectual (yes, he's both, and yes, his first name begins also with an E), W.E. trivialises its own revisionist cause.

Oscar Isaac plays that security guard/intellectual, and James D'Arcy is the slick (and socialist!) Prince Edward.

It's Riseborough as Wallis, though, who gives the film the nearest semblance of a core. 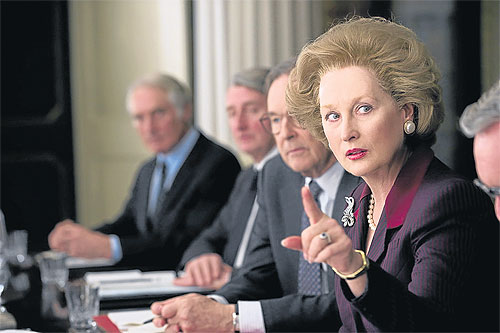 Let's not overpraise Meryl Streep here. She's given the world what the world expected _ a skilfully calibrated, compulsively particular turn as Margaret Thatcher _ and she'll win the Oscar in three weeks, her third. It's hard to say if you're seeing her, Streep, or you're seeing Baroness Thatcher resurrected from contemporary oblivion to bray and bluster against the Westminster mud. At this point in history and in the context of this much-touted biopic, Streep is more famous than her character, and that fame conditions our entire experience: We know walking into a cinema that we're going to watch a great actress giving a performance. And we got just that.

So it's a more pleasant surprise seeing Alexandra Roach, 25, playing the young Margaret with whir and zest; inspiring us to imagine what the Iron Lady was like in her pre-politics youth, Roach's acting seems to rely more on instinct than Streep's masterclass of technical genius. But this being a Streep film, Roach shows up only briefly, as the novice Oxford graduate who rises up against the cynicism and contempt of the predictably male-dominant politics. Then it becomes a Streep show, mostly as Thatcher in her old and foggy age wrecked by dementia and bitter, recurring reveries of her dead husband, played by Jim Broadbent.

Phylida Lloyd (Mama Mia!) and writer Abi Morgan attempt Proustian reminiscences by having the mumbling, antiquated Thatcher recalling the key moments in her life at the slightest provocation, from her first meeting as MP to the contested premiership, from the IRA bombing that nearly killed her to the crunch match of the Falklands War. The Iron Lady feels sparse because these moments are presented as sketches, and while it's the filmmaker's right to sympathise with this furiously divisive and much reviled figure in British politics, the uncritical approach severely undermines the film's conviction.

We can't say Streep's acting is not subtle _ there are small moments that work along the way _ but the subtlety is largely lost in the on rush of events and swift transformation of the all-work-and-no-play Thatcher. We want to feel closer to her, given that the film represents her point of view, but that feeling comes in sporadic jolts, only a few hard nudges in this softened touch at the life of a political steel. 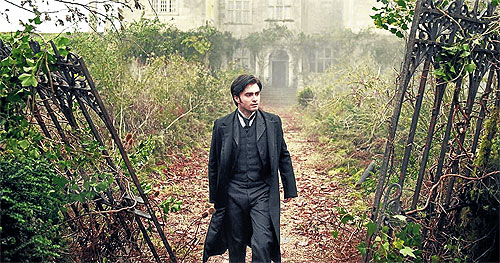 Gothic menace and slow-burn dread work to chill and shake your spine in this haunted-house yarn starring the ex-Harry Potter Daniel Radcliffe. Fans of Hammer Film, the British studio specialising in horror movies from the 1950s to the '70s (think Christopher Lee, Peter Cushing and Vincent Price), will relish the return of the outfit with this admirably old-school scare-fest. Radcliffe plays Arthur Kipps, a turn-of-the-century lawyer sent to a small hamlet to sift through documents at a decrepit, abandoned, and obviously haunted estate that sits on a soul-sucking marsh.

Dark deaths, gruesome fates of children, snuffed candles, a rocking chair that moves and a vengeful mother in black combine to wrap the mansion in a funereal wreath through which Kipps has to work his way. It's bracing to see that vintage horror still surpasses the new digital-dread hokum.