Wandering the streets of Pattaya, you can encounter people from all over the world. The city is popular with tourists and expats for its beaches, its nightlife, and its women.

The plot of In A Small World circles around characters’ relationships with masseuse and companion Jade played by first time actress Srisanoy Jiraporn, above left.

The ladies of the nightclubs and bars have been portrayed in countless movies and books where the moral questions of their occupation are a hot topic, but a new movie is going beyond the shining lights and short skirts to look at the journey that has brought different people to vacation or to stay.

In A Small World brings characters from Japan, Belgium, Austria and India on a journey that ends with them crossing paths in Pattaya. It attempts to take a different outlook on the characters by focusing on the choices they have made _ whether it is leaving their life at home, pursuing a career, or not knowing how to say "no".

Directed by Samy Pavel, a Belgian director based in Sri Lanka, the film tries to avoid the debauchery and look for the humanity.

"I think that people are going to be shocked," Pavel said. "We don't go inside the people's brains to see the failures that lead them places."

The idea for the film came from producer Harsha Navaratne. He thought it would be interesting to bring people from very different countries together because each culture has different ways of thinking and reacting.

Pavel was intrigued and after his first trip to Pattaya and began developing a screenplay.

The Japanese character, Hiroki, is a young journalist sent by his boss (who is also his girlfriend's father) to cover Thai cuisine. His desire to compete in the business makes him vulnerable to the fact that he has been sent to find temptation beyond the food.

In India, Chennai, a software engineer and newly married Brahmin is pressured by his boss to go and relax at the beach. Struggling with pressures from his wife and religion, Chennai hesitantly bends to the demands of his employer leading to mistakes, frustration and an unwanted visitor at his hotel door. 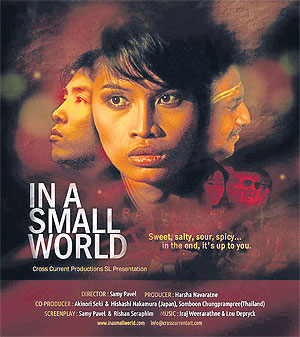 Award winning director Samy Pavel’s film about humanity and choices in Pattaya will be screened at the Berlin International Film Festival in February.

An Austrian painter has decided to abandon his marriage after 30 years to be with his Thai girlfriend. He moves to the beach to avoid his failures and forget his past.

Pavel decided to connect the different storylines with each man's relationship to a prostitute named Jade. Described as a masseuse, a companion, and a comfort, Jade is pulled in different directions by her obligations to her daughter, her husband, and the different men that pay for her attention. Pavel focuses on this character showing the deceptive way she manipulates her clients, but also the effects of the daily judgements from her family, friends and community.

"It is a reaction to a human being who does not know how to defend herself. She cannot write or read in her own language."

With a directing career starting in the 1960s, Pavel has plenty of experience in the industry but decided to change his usual format to take a risk and find "something genuine". He chose many first-time actors from the area.

"I picked people who had never acted before, and they acted perfectly," Pavel explained.

"It was so beautiful because they were not acting anymore. I brought them together one by one, a mixed pot of people from all over the world, and got something that is genuine."

It is filmed almost as if it were a documentary, following the characters actions and their emotions. Pavel encouraged the actors to be free and real with their responses to the situations. To make the viewer feel a part of the community, he left much unwritten dialogue in the movie.

An example he used was when Jade, played by first-time actress Srisanoy Jiraporn, becomes upset at a disapproving teacher. He said that while filming the scene, he directed Jiraporn to follow her emotions and to speak and move naturally.

"When she watched the scene later she didn't recognise herself," he said.

"When you can get to that point where you can just feel it, well, that is real acting."

For Jiraporn, the transition between character and reality proved challenging.

"When I was acting, I just filled the role. I thought of myself as that lady," she said. "But when I walked away to watch, I couldn't believe it was me. It was difficult to watch."

Although it may be a difficult movie to watch at times, she feels that it is important to look beyond labels and instead at what makes people real.

"In Thailand there is a bad side and a good side as well, but before you make a judgement you have to look at it all, and this is a real side," she said. "Whatever people do, they have a reason behind it. They are forced in some sort of way to do it _ they make the choice because they have a reason to do it."

That is the message behind the film: choices. It is a different take on the prostitutes and their clients because it does not give a moral judgement on the people or their actions, but instead follows their choices.

It is those choices, good or bad, that makes all of the characters human and vulnerable to the consequences.