An updated survey of archaeology and early history

In 1998, the British archaeologist Charles Higham and Rachanie Thosarat, formerly of the Fine Arts Department, published Prehistoric Thailand which conveniently summarised the results of the growing number of archaeological projects in the country. Fourteen years on they have decided the work needs updating. There has been a lot more digging, but more importantly there are now better dating techniques, the new science of DNA, and a new vision of early human history. 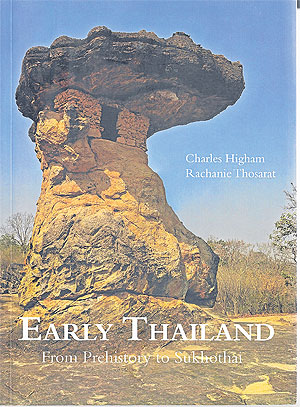 Homo erectus probably wandered into this region a little under a million years ago, but his presence has had to be surmised from the discovery of a few simple tools. More certainly, early hunter-gatherers were sojourning in rock shelters in the hills within the last 100,000 years, and settled on the coastline after the seas rose some 6,000 years ago.

The focus of the 1998 book was on digs in the Bang Pakong estuary which revolutionised our view of hunter-gatherer societies. Rather than living a mobile and precarious existence, these people were settled for a long time, enjoyed a varied diet, stayed fit from exercise and constantly adapted to the ecology changing around them. They buried one woman with a shroud of 120,000 shell beads, perhaps because she made such good pots. Here the authors add two pieces to this story. By DNA, these people can be linked to the Negrito groups (Semang) who still live in the forests of the peninsula, and perhaps also to Australian aborigines. And at some point they started exchanges and intermarriage with a new group, possibly the pioneers of settled agriculture.

In the earlier book, Higham and Rachanie wrestled with the possibility that rice might have been domesticated from local wild species. Now they have decided that rice and probably millet came around 2000 BC from sub-Yangtse China through Yunnan with a new wave of migrants, who possibly brought an ancestor of the languages now labelled as Mon-Khmer, as well as dogs descended from wolves found in China. 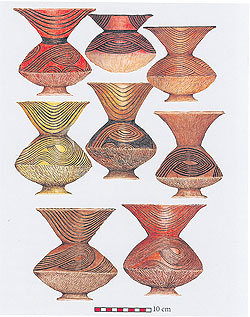 With new dating technology, the authors fix the start of the Bronze Age around 1000 BC, scotching old claims that Ban Chiang might have been among the earliest bronze-using societies in the world. They hazard that the technology came from China or India or both, but the industry became highly developed here because of plentiful raw materials. Sites near the Mekong River smelted ore into ingots which were then dispersed to many communities which forged tools, vessels and ornaments.

Elsewhere in the world the Bronze Age saw the rise of elites that controlled this technology. Earlier research in Thailand had failed to confirm this pattern, but it now seems that was because the research was on too small a scale. At Ban Non Wat, in the upper Mun valley, the authors have excavated 25 generations of a Bronze Age community. By the mid point, prominent families were being buried in enormous graves with wooden coffins, fabric shrouds, arms looped in bangles of shell and marble, fingers bristling with rings, and stacks of pots, weapons and totemic objects. Most strikingly, many infants and children were also being buried in this lavish fashion, suggesting that families or lineages, and not only talented individuals, had acquired superior status. The pottery from these communities predates Ban Chiang by a millennium and outstrips it for beauty of design

After iron arrived, around 500 BC, people made hoes for agriculture, spades for digging dykes and spears for fighting. Moated settlements spread in a thin stipple across the Isan plateau. Some expanded concentrically, suggesting a growing population. Trade with India and Vietnam brought exotic new goods, particularly the Dong Son drums, and new ideas, including early Buddhism. At the narrowest point on the peninsula, a large community began manufacturing a lot of the beads and glassware that was once thought to have been imported from India.

DNA research shows that these people are most closely connected to the Nyah Kur or Chao Bon, speakers of old Mon who now live in the hills of Korat and Chaiyaphum.

Despite the new evidence for chiefly elites and the older evidence of the Iron Age expansion, what is striking about this whole area up to around the 5th century AD is the relatively small scale of the settlements, the variety of cultural practice and the sense of impermanence. All made pots but of slightly different shape and decoration. All buried their dead but with different rules and accoutrements. And most settlements disappeared after some time. From around the fifth century, this pattern changed dramatically. Much larger proto-cities appeared, invariably alongside rivers rather than on the uplands. Buddhism took root and cremation replaced burial. Chiefs started calling themselves kings, with Indian-derived names. Some built brick monuments or carved inscriptions into stone. And many of the new centres lasted for centuries.

Unlike the earlier book, this new volume crosses the boundary from the skeleton era into this new historical phase, with a final chapter taking the story from Dvaravati to Sukhothai. Since 1998, Higham and Rachanie have been involved in excavations that try to bridge this prehistory/history divide, and Higham wrote a fine book on Angkor which brought together the archaeology and the inscriptions. There he argued that the impetus for state-building was local, based on the trajectory of growing trade and social complexity which began in the Iron Age. But somehow this final chapter fails to convey the results of this research or give any interpretation for the momentous changes of this era. Perhaps the compression ratio is just too high.

In these books, Higham and Rachanie summarise the results of archaeological projects, site by site, area by area, with lots of pictures of the landscape, the digs, the skeletons and the artefacts. For those without the time or expertise to read the technical reports, this is superbly useful. The authors also summarise the finds from each period and point out the novelties, but they use little theory in their analyses and are clearly sceptical of those schools which do more deduction than digging. They give us a clearer picture of what changes occurred, but leave it to us to wonder how and why.

As with its predecessor, this is a hugely valuable book and hopefully this tradition of updating will be continued at regular intervals. If there is a reprint, the authors and River Books should clean up the errors, particularly towards the end.