The visual reference of the latest Khu Kam movie, our favourite love-amidst-Allied-bombing drama, is Japanese manga. Precisely the kind that features a gamine girl with extra-large eyes embroiled in a bickering, cruel flirtation with a smart, slim boy with extra-thick eyebrows and playful arrogance, preferably attired in a uniform. For a few minutes, it seems like an attempt at revisionism of a 48-year-old novel about a patriotic girl torn by her love of a dashing Japanese soldier as the Emperor's Army coaxes its passage through Siam during World War II. A shot at contemporarising a classic, so to speak, only that the outcome is closer to trivialising it. 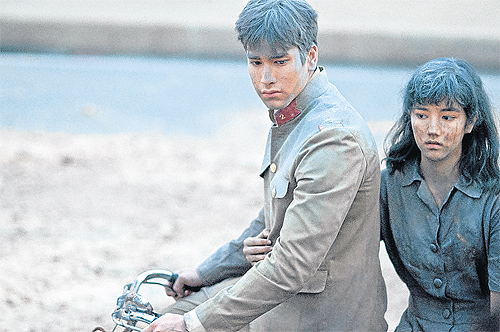 Kobori, the Japanese soldier, is played admirably by heartthrob Nadech Kugimiya (an Austrian-Thai with no Nipponese blood, despite the surname). Oranate D Caballes, a Thai of European descent, plays the pert Siamese girl Angsumalin. They both, however, seem to exist in a tropical Wonderland where war is distant except when required by the plot. For a long stretch _ despite a few moments of Allied air raids, photogenic smoke and shrapnel-aftershocks shot in super slow-motion in comic book aesthetics _ we nearly forget that the setting is mankind's last major war. That love conquers all is a given (we need that to go through life), but where the film principally fails is its lack of tension between the lure of romance and the call of history. As we know, and as Tomyanti's source novel knows, love is most powerful when it's illegal, when it's up against the rule of what's allowed. Here Angsumalin, a more important character than Kobori I believe, appears blank, her feistiness a hollow show, and her tears fake.

Director Kittikorn Leosirikul has a clear strategy: perhaps in a bid to "re-interpret" the much-told tale, he leaves out the surrounding context and small details, and puts the two lovers in the looking glass. He aims for soapy cuteness rather than stern realism, and he experiments with odd mise-en-scene (why those suffocating close-ups?) and odder narrative devices, such as the voice-over narrating Angsumalin's inner anguish _ think, again, a wide-eyed comic-book heroine with bubble dialogue over her head. All of this would've been interesting had it not been so misplaced. Khu Kam, fundamentally, is a tragic romance, and it has to move. What we have here instead is a jaded melodrama, with little chemistry between the lovers and with most emotional buttons left unpushed _ despite the annoying music that keeps intruding like an air raid siren.

What nearly saves it is Nadech as Kobori. He seems to be the only one who knows what this version of Khu Kam is all about, and he assumes that impish liveliness of a Japanese cartoon hero (the bushy eyebrows help) with childlike flamboyance. It's the intention of the film, I believe, to leave out any trace of military brutality committed by the occupying Japanese troops (in previous versions we always saw some of it). This is not to whitewash history, but perhaps to pasteurise the puppy romance between Kobori and Angsumalin. A strange choice, but on that line of thought Nadech is a perfect Kobori: his smooth complexion, tidy teeth and shiny cheeks make him a model who can transform a bombed-out bridge into a catwalk, the grey ashes of destruction becoming a shower of confetti glorifying his romantic heroism. Watch him and you can never believe that he's a soldier in the midst of a war, let alone a world war.

For one thing, Khu Kam can never be shown in China, where the wounds of history won't be quickly healed _ too bad Nadech, you could've been big there. Director Kittikorn said in an interview a few weeks back that one of his references is the film District 9, in which the human population and an invading tribe of aliens learn to co-exist, mostly peacefully, and that's applicable to an extent to what happened during World War II between Thai people and the Japanese soldiers. That doesn't sound like a revisionist reading of the event but a regressive one _ for both historical and dramatic reasons. Lightweight, oblivious and simply weird in many ways, this new Khu Kam relies on Nadech's bright mug to lift it out of hygienic gloom. And even with that weapon of mass seduction, it hardly works.