The making of Montien Boonma

Few art enthusiasts have not heard of Montien Boonma, whose highly symbolic work Nature's Breath: Arokhayasala from the "Temple Of The Mind" exhibition took Asia Society by a storm in 2003, a couple of years after his death. 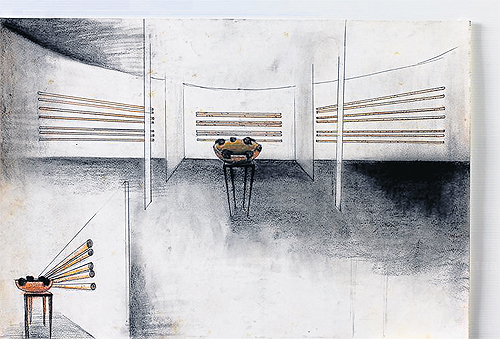 The large bell-like sculpture with lungs instead of ringers is arguably one of the most distinctive and instantly recognisable pieces of Thai contemporary art, and is a culmination of Montien's state of mind and physical condition _ almost a personal yearning for healing.

At the time of his death in 2000, Montien was arguably better known in the international art circle than in his own country. His life was cut short by cancer, which also took the life of his beloved wife, Chancham Mukdaprakorn, a few years earlier.

Called "one of Asia's most gifted contemporary artists" by the National Gallery of Australia where "Temple Of The Mind" was exhibited in 2004, Montien combined his experiences from his studies in Bangkok, Rome and Paris, with his own interest in nature, rural life, textures and organic substances, as well as healing and beliefs.

This year he would be 60, and the Jim Thompson Art Centre, together with the Thai Art Archives, Bangkok, has put together an exhibition titled ''[Montien Boonma]: Unbuilt/Rare Works''. This ''behind the scenes'' look at Montien's life and work is told through his personal collection of documents, notebooks, sketchbooks, printed matter, photographs, video footage and other related materials. These were kindly provided by the artist's son, Choompong Boonma, who is in charge of the estate. It is one of the most comprehensive looks at one of Thailand's most notable artists.

The collection helps shed light on what went on within that brilliant yet troubled mind, what influences helped to form his vision, and what impressed him through his journey on his artistic path.

Among the exhibition are some 60 original drawings rarely, or never before, seen by the public, and art pieces on loan from private collections.

The first room is dedicated to Montien's work upon return from his studies in France in the late 1980s, and when he taught in Chiang Mai. During this time he was greatly influenced by rural life, nature and the environment, and felt that art should reflect society and its simplicity.

Much of his work during this period revolves around themes such as buffalo horns, gunny rice sacks, leaves and soil which he used as collage, all of which became part of his postgraduate thesis at Silpakorn University.

A small room houses the archives section, which displays his correspondence with Hans-Ulrich Obrist. The curator and historian invited Montien to be included in his publication and exhibition project ''Unbuilt Roads (1997)'' which compiled unfinished, unrealised or unexecuted works as important documents for shedding light on artists' processes. The collaboration never took place; Montien passed away before the project could be realised.

Inside the room are sketchbooks with drawings that the artist made during his travels, personal items, books he read (including one on German artist Joseph Beuys), sketchbooks for some of his major installations, and a picture of his sculpture in Paris. Co-curator Gregory Galligan, the director of Thai Art Archives Bangkok, remarked that it was noteworthy that Montien signed and dated every entry, aware of their importance as comparable to real art works. It is also worth noting that he wrote in Thai, English and French, which he mastered during his time in Europe. A never-before-seen video shows different events in the artist's life.

The next section presents the artist's fascination with zodiacal houses, as well as what influenced that theme. As an artist-in-residence in Stuttgart, he was charmed by the ringing of church bells, a sound which he found meditative. A map of Stuttgart on the wall shows how the sound of the bells emanates from each church and covers the entire city, resembling the stars in the sky. From this concept he created sculptures in the shape of church spires or domes. Viewers can stand under the domes and look up to see a perforated roof in the shape of constellations, while medicinal herbs provide a soothing effect, emulating the feeling of peace and spiritual security that you get when walking into a religious building.

In the next room are ideas for some of his works for international exhibitions, such as Arte Amazona in Brazil where he was exhibited alongside giants like Marina Abramovich.

The use of breasts in his work here reflects his concern for his wife, then diagnosed with breast cancer.

This room also highlights the artist's Unbuilt/Unrealised Projects, drawings for symbolic installations which entice yet tantalise the viewer. ''Montien Boonma liked his work to be mysterious,'' explained Mr Galligan. ''He said, 'Most of my work is in between _ presented and unpresented. I like something that doesn't tell too much and something happens'.''

This room culminates with his final creation Untitled (Funeral March Series), rendered in 2000 by an assistant following directions he left not long before he died. It shows an installation based on Chopin's Funeral March, using bamboo pipes and herbs to resemble a Western musical score. It was meant to communicate with his wife who loved Chopin.

''Even when he could no longer draw, he never stopped creating,'' said co-curator Gridthiya Gaweewong. ''We want to share his legacy and feel the energy.''

Since his wife, Chancham, was so much an integral part of his life and creative process, a room in the exhibition is dedicated to her. An artist and printmaker in her own right _ they met during their undergraduate studies at Silpakorn University _ a series of her prints is also displayed. 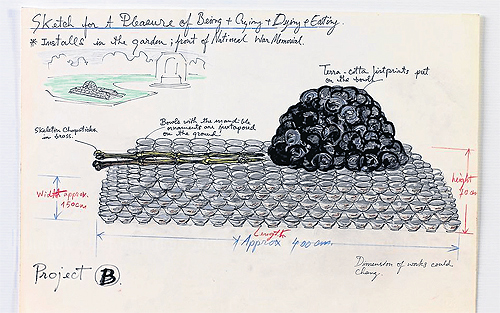 Sketch for A Pleasure Of Being, Crying, Dying, Eating , installed in the garden, front of National War Memorial Project B, 1993, Estate of Montien Boonma. 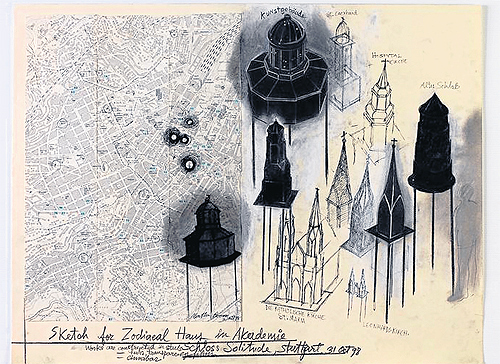