Searching for truth, missing the voice

Traditionally speaking, documentaries are supposed to carry some aspect of reality. But in the postmodern world, that notion seems to be outdated. In other words, stating the Absolute Truth is not an easy matter, for truth often melts into "discourse". Every idea is just another opinion _ this is the era of anything-goes. 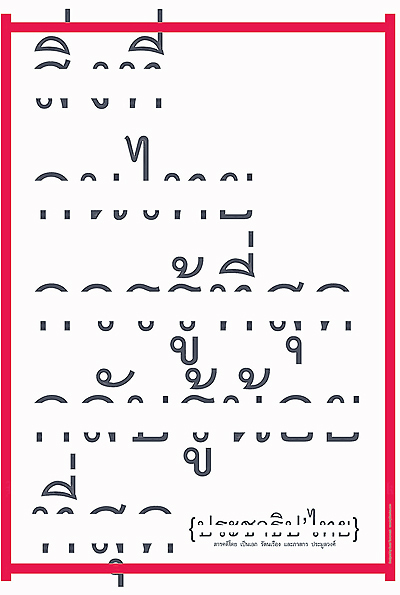 A promo poster for the film which reads: ‘‘The thing the Thais should have known most but know the least.’’

Prachathipathai (Paradoxocracy), a collaboration between Pen-Ek Ratanaruang and Passakorn Pramoolwong, shows the directors' courage in making a political film in an era of strong censorship and internal division. Yet intentionally or not, the film revives the pre-postmodern spirit. Its press kit says that the film is about "The thing the Thais should have known most but know the least". With this statement, the directors embark on a crusade into the abyss of Thai politics with a claim to find the truth about the "Thing" that Thais know the least about.

The main protagonists in the film are an army of intellectuals inside and outside academia _ Sulak Sivaraksa, Thongchai Winichakul, Prinya Tewanaruemitkul, Ammar Siamwalla and around 10 more. While they are noted scholars, activists and writers, in this film these media and political "celebrities" are not identified by their intellectual status.

In the eyes of the two directors, these talking heads are nobodies _ their names only appear during the end credits, without stating their academic positions. The directors revoke their intellectual status to grant the audience the freedom to judge the protagonists by what they say rather than who they are.

For those who are well-versed in Thai politics, this film doesn't say anything new. The joy of watching Paradoxocracy belongs to those who know little about Thailand's political history or those who honour the main interviewees enough to pay to see them on the big screen instead of free TV.

The film conceives Thai democracy in terms of political history, and one of the film's shortcomings is the way it excludes smaller people _ the unorganised masses, landless farmers, forgotten writers, the Communist Party _ from its narrative of democracy. As the two directors decide whose voices will be heard and how they should be seen, they command their troops of academics along one storyline: the competition among the monarchy, the military, and the intellectuals during and after "The Transformation".

The monarchy and the army share power-seeking behaviour. They are portrayed through the plot devices of conspiracy and power play.

Those who represent the monarchist side include Rama VII, Prince Damrong, Prince Boworadet and ML Seni Pramoj, founder of the Democrat Party. While the film begins with the first Announcement of the People's Party on June 24, 1932 _ a denunciation of monarchist rule _ Paradoxocracy emphasises the willingness of Rama VII to accept the revolution. In other words, our transformation to a democracy began with a mutual agreement between the king, the military and the intelligentsia of that time. The portrayals of other princes and members of the royal family are different. Prince Damrong was dissatisfied with the new regime. Prince Boworadet launched a reactionary coup. Meanwhile, ML Seni contrived a plan to restore the royalists amid conflicts between the military and intellectual factions of the People's Party, or Khana Rasadorn.

The key figures from the military are a menagerie of field marshals: Plaek in the 1940s, Sarit in the 50s and 60s, Thanom and Prapas in the 70s. While Plaek is portrayed as an arrogant field marshal who tried to claim the right to possess Rama VI's mace, his successors are marked only by megalomania.

The directors highlight Plaek's sin of being too ambitious by contrasting it to Pridi's objection to Plaek's claim as stated. Pridi is seen with respect, as more royalist. Although Plaek was one of the founders of the 1932 Revolution who rarely ruled without the constitution, the film depicts him in an almost more evil light compared to Sarit, Thanom and even Prapas, who governed without the rule of law.

The representation of the intellectual class is different. They had no personal impetus. In the worst case, they were merely ignorant for a good cause, driven by political and intellectual imprudence but with no intention to do harm. Pridi led other intellectuals in his generation in the 1932 Revolution. University students led people in the overthrow of military dictatorship in 1973. Pridi failed because of his lack of experience. The student movement failed and their members were killed because of the domination of the movement by the extreme-left fraction. In brief, Pridi was too naive while the students of the later period were too radical and went too far.

Although the film highlights the political history of Thailand from 1932 to Thaksin Shinawatra's rise and a hint of his successors, the focus on the monarchy and the military is limited only to the period of Rama VII until the time of Gen Thanom in the 1970s. Why discard other players in the monarchy and the military? Aren't the directors aware of the role of other figures in Thailand's political history? Is it another form of censorship in addition to the black strips over parts of the subtitles and the muting of certain words _ the remnant of state censorship _ in the film? It's clear that Pen-Ek and Passakorn intend to leave some traces of censorship in the film, but can we assume that the two directors have already censored themselves with the absence of some historical figures and stories?

Paradoxcracy claims to present an exposure of the hidden Truth in Thai political history. In some respects, the film does not deliver on its promise. Firstly, self-censorship and forced censorship have never facilitated the search for the truth. Secondly, the history of Thai democracy is not equivalent to the history of political leaders alone. The history of Thai democracy also entails economic injustices, social differences, class struggles and cultural discrimination. Thirdly, by focusing on the relationship between the monarchy, the military and the intelligentsia, Paradoxcracy overlooks the multitude who have in certain ways contributed to the development of Thailand's democracy _ the unorganised masses, the working class, the Communist Party, landless farmers, writers, teachers, taxi drivers, etc.

Instead of trying to search for the "absolute truth" hidden in Thailand's political history, the obscure chapters of history need to be brought to light by emancipating truths from authorities who claim to possess them. Taking a few steps away from the intelligentsia's grand theory of Thai politics is necessary if one is to make a documentary about democracy that is democratic in its character. Go to the masses, capture the variety of voices and deal with democracy by democratic means. Or at least remind the audience that Paradoxcracy is a collection of views of intellectuals and university types. The truth is more than that, and it still lies out there.

Sirote Klampaiboon is an independent scholar on human rights and social sciences.
He recently translated Amartya Sen's Identity And Violence.