Not just a pretty face

published : 27 Feb 2015 at 06:00
newspaper section: Life
writer: Kanokporn Chanasongkram
The short film was shot in the forest and at a maize plantation in Santisuk district.

Over the past five years, Nadech Kugimiya has starred in only six soap operas and one movie, Khu Kam, but that's enough to make the Austrian-Thai (with a Japanese name) one of the hottest heartthrobs in the industry today.

His latest drama series, Lom Son Rak (The Wind That Hides Love), premiered on Channel 3 last night, and to his fan's delight he plays identical twins.

Nadech has expanded his interest in the showbiz industry. Earlier this month at the Nan Arts Festival, a short film which he wrote, directed and starred in, Mr Peter's Project, was screened. The film is a fantasy comedy that deals with deforestation in Nan, one of the country's most important watershed areas. The 40-minute film, which is Nadech's thesis project to complete his bachelor's at Rangsit University, can be viewed on YouTube.

In the movie, a businessman sends Mr Peter to purchase Nan's last forestland in order to turn it into a maize plantation and commercial property. The quirky Peter meets a pretty local, who takes him into the forest and he starts calling her Jane, after the female protagonist in Tarzan.

Soon Jane shows Peter the beauty of the forest and its undisturbed ecosystem, which changes his mind about commercialising it. In playing the lead, Nadech said that he "references the acting style of Jim Carrey, but not as over-the-top".

As director-actor, Nadech's face is what draws people to watch the film. But for him, it's the message that's more important. The denuding of the forestland is happening at an alarming rate in Nan, leaving a scary landscape of bare mountains and raises concern that Nan's greenery may disappear within a few decades.

"During the location scouting, it was disturbing to see the barrenness of the mountains. As an outsider, I didn't know that Nan faces such a critical problem. I also learned of the conversion of forestland to agricultural land and other man-made problems," Nadech said.

"The short film aims to raise an awareness of deforestation. We shot it in contrasting locations so that the audience could see the concerning khao hua loan — bald mountains — as well as Nan's well-preserved national park, to present thought-provoking images and urge action for the sustainability of forestland."

In making the short film, the actor was also inspired by the Ruk Pa Nan (Conserve Nan Forest) project initiated by HRH Princess Maha Chakri Sirindhorn, who encourages both public and private sectors to be involved in forest conservation.

The three productions by Rangsit University present the remote northern province in various aspects, including its culture and tradition besides its natural beauty.

"The three short films couldn't show everything and you need to come to see for yourself how charming Nan is," said Nadech, who graduated with second-class honours and received his degree last Sunday.

The superstar hopes that the films will make a difference in promoting Nan's forest conservation and serve as an education for tourists to preserve beauty of the places they visit. 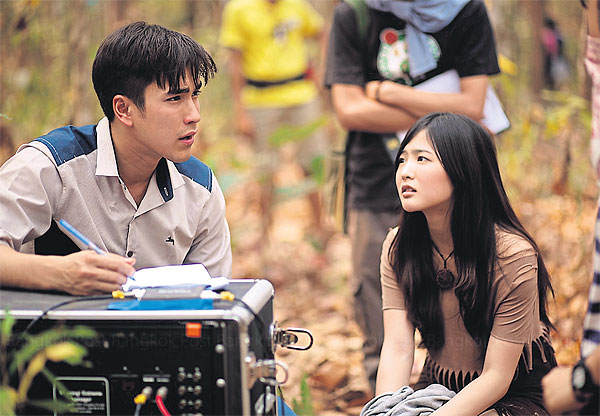 The superstar as film director.