Through the snow
Life
Social & Lifestyle

'I think I was, like, three years old when I started skiing. It was normal for kids living in the mountains," recalled professional cross-country skier Karen Chanloung, 20. Next to Karen was her older brother Mark, 22, who is also a pro athlete. The half-Thai, half-Italian siblings grew up in Gressoney-La-Trinité, a town in northwestern Italy, surrounded by snowy mountains and great ski spots.

"We just went with our parents at that time and, later, we began to learn about skiing in serious depth," she continued.

When people think of snow-related sports, people don't think of Thailand -- or even Thai athletes, for that matter -- for the reason that we don't have snow. Not many are even aware of the fact that there is actually a Ski and Snowboard Association of Thailand (SSAT), and that it is sponsoring six athletes -- Mark and Karen included -- to compete in the upcoming 2018 Winter Olympics in Pyeongchang, South Korea.

With their dual citizenship since birth, the Chanloung siblings have previously represented the Italian national team; however, last year they officially joined the Thai national team.

Making it on the national team, it is apparent that the siblings do take their sports very seriously, from that humble start in their hometown. Their father, Boonchan, revealed that his initial goal for getting his kids into sports didn't come with any grand aspiration at all. Sport, he used to believe, was just a means to keeping his children healthy -- as well as serving as a backup plan should things not really work out for them in life. 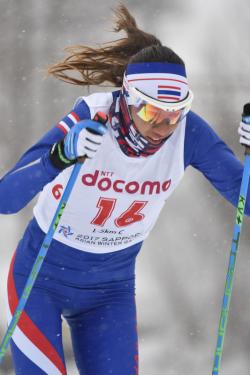 The Chanloung siblings during a ski competition. Photos courtesy of Olympic Committee of Thailand

"It was in case they don't finish school or can't get a job, you know? At least they would have this skill in skiing to feed themselves. They could become instructors and teach tourists how to ski," said Boonchan.

But when Karen won a big ski competition in France when she was just nine years old, and with Mark also starting to shine, their parents decided to invest in the sport, and supported the two in their athletic pursuit.

They started out with fast-paced, downhill alpine skiing, and later changed to cross-country -- a safer option according to their parents, as high-speed skiing can be very dangerous. On the other hand, cross-country skiing focuses more on strength and endurance, as the athletes would go uphill, downhill and on flat land.

"You kind of have to run with the ski," explained Karen.

Being a pro athlete comes with a strict training schedule that the siblings have to keep to almost religiously. In winter, they ski every day. And in summer, they run, hike, cycle and hit the gym for fitness and weight training, plus spend hours on the ski roll.

"Basically, it's everything that will get our muscles ready for the competition," Mark said.

The two would head out to training together, whereby they would follow a different programme schedule.

"I'm more of a sprinter. She's more into long-distance. So we mostly follow different routines. But at the end of the day, we have one another for support," he said. 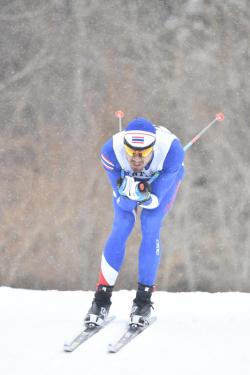 On top of having their heads in the game, Mark and Karen still make time for their education. They are currently enrolled in separate universities in Italy, with Karen taking an online course in economics and management at Niccolò Cusano University, while Mark studies sports and wellness at the University of Milan.

"It's good to not just train but have other hobbies," said Karen.

Now, with support from the SSAT, the Sports Authority of Thailand and others, the Chanloung family of four is travelling the world together. With their two children on the team, Boonchan serves as the team's manager, his wife as physiotherapist.

"Our team is pretty special because it's a family team, and our parents always come with us to training camps and competitions. They are always there to support us," said Karen.

Suffice to say, every day is family day for the Chanloung family. And Boonchan said he is very proud to be able to go places with his kids, and especially since they got him a second job as team manager, aside from his usual work as a natural therapist.

"My wife and I gave our all. I think we were close to bankruptcy at one point," joked Boonchan. "We believe that, by having our kids as athletes, it trains them to be fighters. They know what it's like to win and to lose. That, in itself, is a win for us as parents.

"Sometimes, the weather would go below -20C. Some people cry after they finish the race. It gets really cold, and then you're faced with suffering. But in life, you face even greater suffering. And there are many who suffer more than we do. You end up gaining a fighting spirit from it. You don't give up."