In praise of mangoes

There are over 200 mango cultivars but only a handful of them are known by regular consumers. We take a look at the rich variety and culinary applications of the golden-hued fruit

At this very minute, no fruit dominates Thailand's food scene like the mango. The juicy, brightly yellow flesh of the fully ripe fruit, typically accompanied by sweet sticky rice, is regarded as the gastronomic holy grail for the summer season by many aficionados, locals and visitors alike.

The annual harvest of Thai mango peaks from mid-March to the end of April. Yet throughout the year, consumers can find the fruit being offered in various awe-inspiring varieties. In recent years, Thai mangoes have become a popular ingredient that add a luscious tropical tang to many Western treats including ice cream, doughnuts, cheesecake, macaroons, eclairs and panna cotta. Meanwhile, every som tam fan relishes the mango-based zing of the dish.

Mango has a lot more to it than the amber-hued glamour and its modern-day renditions, and besides the perennial favourites such as the Nam Dok Mai and Ok Rong types, Thai mangoes come in a rich variety of over 200 cultivars, with distinctive characters and flavours.

Among us nowadays are basically three distinct types of mango eaters. There are the dessert-buff millennials who cherish the fruit for its sweet fragrance and sappy flavour, and then there are keen connoisseurs of mango who celebrate each cultivar differently and profoundly. And we cannot overlook those fruit cart regulars who routinely consume mango -- mostly in a green and unripe form -- yet with the least knowledge of the native fruit. Although mango is among the most widely cultivated fruits in the country and a very common household crop, only a handful of cultivars of mango are well-known commercially. 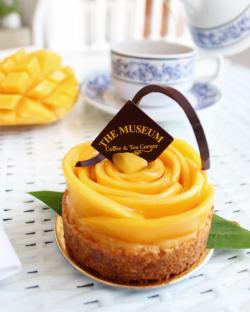 "There are actually more than 200 distinct types of mango grown throughout Thailand at the moment," said horticulturist Wanchat Nitiphan of the Faculty of Agriculture, Kasetsart University. "But the wider public might be familiar with just a few types such as Nam Dokmai, for that cultivar is highly marketed and much-loved by international consumers."

According to him, Nam Dokmai tops the favourites chart of ripe mangoes. The cultivar boasts subtle sweet and velvety yellow flesh with a nice aroma underneath the thick skin, which is ideal for distribution. So it's the country's number-one exporting mango cultivar.

But the cultivar is prone to disease. Thus, Wanchat said that you would hardly find prime-grade Nam Dokmai in flawless condition at local markets. The meticulously cared-for fruit is mostly for export.

For discerning locals, however, Ok Rong is more sought-after, for its pungent sweet taste, strong fragrance and fine skin, though the meat can be fibrous.

For green, unripe mango, partaken of more by Thais than by foreigners, Kheow Sawoey and Fa Lan are the most recognised cultivars.

Green, unripe mango (known in Thailand as mamuang man) is treasured for its crunchy texture and slightly sweet nutty taste. Some consumers might prefer mamuang man that comes with a zest of tartness. The mango is eaten with a choice of dipping condiments. Most common are a dry mixture of sugar, salt and chillies; and a gooey infusion of caramelised fish sauce, shallots and fresh chillies.

To look into Thailand's mango legacy and its variations, the horticulturist cited a verse written in 1884 by Phraya Srisunthorn Wohan (Noi Ajarayanggura).

It lists more than 100 types of mango in the Kingdom. Among them are extinct cultivars including Chalawan, Kratae Luem Rung and Phua Tee Mia. 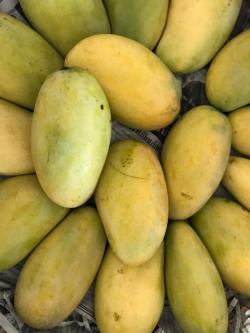 Unfortunately, the indigenous cultivars, which had graced Thailand for centuries, have now been pushed to the back of the scene. That is to make room for new species that have gradually emerged in the market over the past three decades.

Wanchat explained that many of the new mango types are a product of natural crossbreeding.

"For example, Maha Chanok is a hybrid between Thailand's Nang Klangwan and Australia's Sunset; while Choke Anan is a crossbreed between two local species."

He also noted that some types of mango, despite their Thai names, are simply a local cultivation of foreign species. They include Chakkaphat Daeng, Nuan Khum and Kim Ju from Taiwan, and Kaew Khamin from Cambodia, as well as R2 E2 from Australia.

As of today, while the mass-marketed mango costs no higher than 70 baht per kg, there are mango fans willing to pay astronomical prices for the extraordinary.

Yai Glum mango, from a century-old tree in Nonthaburi, is said to have fetched up to 10,000 baht per kg for its very sweet flesh that silkily covers a very small seed.

Though mangoes can be grown in almost every terrain across Thailand, there are some localities regarded as a perfect area for mango planting.

Nonthaburi, Ratchaburi and Chachoengsao provinces are known by mango epicures as a well-protected geographic origin for domestic mangoes.

Chachoengsao, which is situated on the bank of the Bang Pakong River, is blessed with nutrient-rich soil that helps develop a good taste for the fruit.

Uncle Pramote's orchard in Khlong Khuean district is among many plantations in the province to showcase a native diversity of mangoes.

Among the highlighted cultivars here is Khai Tuek. The cultivar boasts beautiful yellow skin, even when unripe, to complement a pudgy shape. When fully ripe, its flesh is said to be so sweet and tasty that people would trade in their property for the fruit (hence its name, which refers to selling buildings). It is priced at the orchard at 40 baht per kg.

There is also the ancient Nang Nuan, which is most delicious when half-ripe with a light hint of tanginess. There are also cultivars that yield as large a fruit as a regular-sized pineapple.

"Our Khiew Yai, Sri Sothorn and Choke Phaiboon mangoes can weigh up to 2kg per fruit," said Phong, the second-generation owner of a family-run orchard.

"As a mango grower, I am highly confident that the taste of Thai mangoes is second to none in the world. However, it is intimidating to see on a commercial scale an invasion of mass-marketed foreign cultivars, especially from Cambodia. They come in large volume and are very cheap, as low as 2 baht per kg," he said.

"The majority of the younger generation today consume mango in a peeled and ready-to-eat form, mainly from a fruit cart. Therefore, they can hardly tell different types of mango apart. They basically love tart green mango, regardless of the cultivar, and enjoy it with spicy condiments or in som tum and yum [Thai-style sour and spicy salad]."

So what's the expert suggestion for amateur mango fans?

"For the sweet ripe mango, it is highly recommended that you ask the fruit vendor for the ideal consumption date. Because most vendors usually display the fruit when underripe. If you'd like to eat the mango on the same day of purchase, you have to request the already-ripe fruit.

"For the green version, look for your favourite species and ask to taste the fruit before you buy. And it's important to keep in mind that mango tastes best when in season." 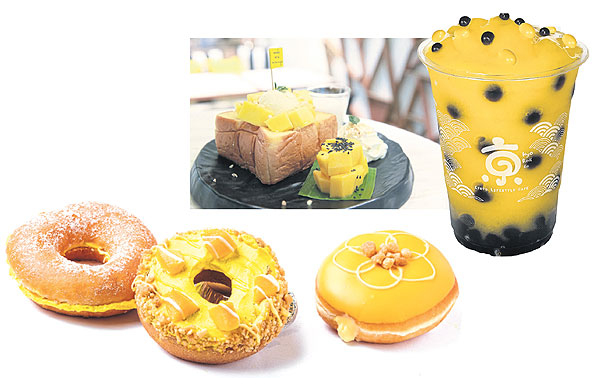 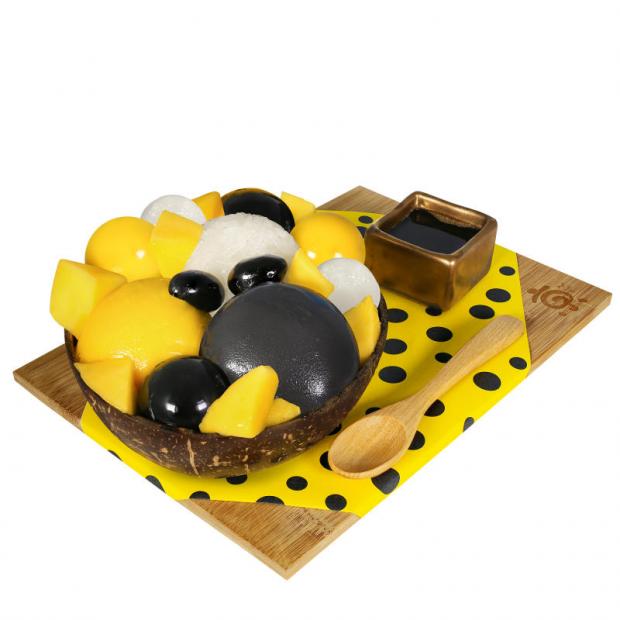 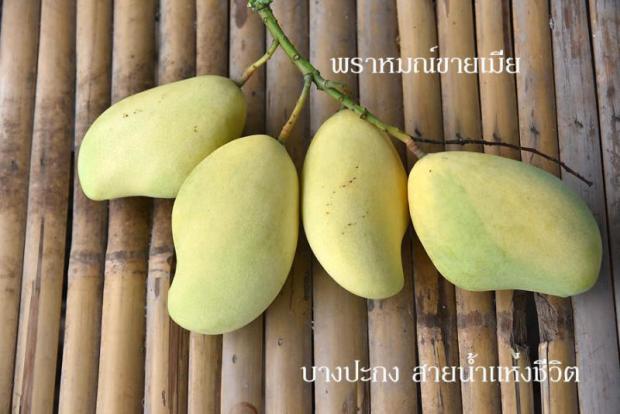 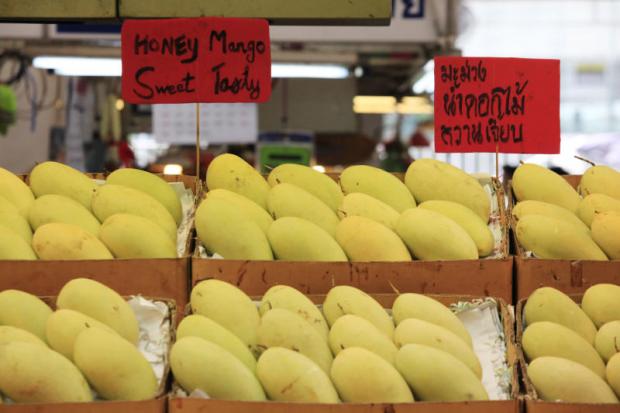