Cherprang Areekul speaks candidly about her acting debut, the burden of leadership and her 'graduation' from BNK48

When one of the most popular singers in the idol group BNK48 landed her acting debut in the fantasy thriller Homestay -- the most anticipated film of the month -- it's easy to assume she got the role because of her fame rather than her talent.

And maybe that's the case, though that doesn't diminish the professional gravity and creative challenge that Cherprang Areekul is taking on.

"It is an honour to have the opportunity [to be in this big film], but it is also frustrating," she said. "I wasn't selected for my acting skill because I didn't have any. I was under pressure to see how well I could do."

No young woman has had a more whirlwind year. Cherprang is the "captain" of BNK48, a candy-coloured, Japan-style idol outfit in frilly costumes that commands the phenomenal devotion of fans. Cherprang, overseeing over 20 younger girls in the group, presides over an entertainment machine driven by social-media obsession and members' online persona rather than by, say, their singing or acting talent. She led her troupe to shake hands with Prime Minister Gen Prayut Chan-o-cha, and was later embroiled in a mild scandal when she agreed to host an episode of the military government's 6pm news show. Still, thousands queue up to get up close to her at the handshake events held regularly by her label. She's also an outstanding chemistry student at Mahidol International College, and hence Cherprang has become a poster girl for a generation of beautiful, well-rounded youngsters, with academic excellence as well as showbiz confidence -- in short, the candidate for a perfect woman.

That, of course, is the pressure she's talking about, even before this movie thing came her way.

Director Parkpoom Wongpoom chose Cherprang for his supernatural fantasy Homestay in July of last year (see side story), long before BNK48 had its megahit single Koi Suru Fortune Cookie. With zero acting experience, the captain beat other candidates because Parkpoom thought her looks matched the charming character, called Pie, who is the object of affection of a wandering spirit trapped in the body of Min (Teeradon "James" Supapunpinyo). The film has been adapted from a Japanese novel called Colourful, a coming-of-age story that tackles the big subjects of life, death and existence. 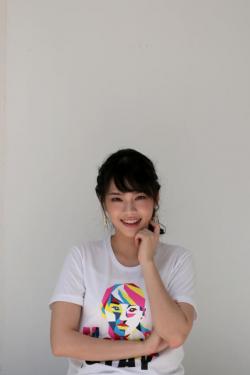 Cherprang met us and confessed she had slept only five hours last night. And yet the 22-year-old looked fresh, with sparkling eyes and a pretty smile. Her most attractive qualities are her sincerity and amiability.

To develop her acting skills, she was sent to several workshops. Cherprang admitted that she had a hard time expressing her emotions, especially the crying skills held in high regard by Thai lakorn actresses.

"My parents taught me to be reasonable. I also study science, which values logical thinking," she said. "I thought crying didn't help with anything, so I always controlled my emotions. I tell myself everything will be OK and hide my feelings inside."

Acting, however, has moulded her personality.

"Now I accept how I feel and live with it. I used to stay strong because I didn't want my family to worry about me. I told myself I must be happy, but my mother told me that I didn't have to be strong," Cherprang said. "When I let things go in the workshop, it was scary. I didn't dare watch the footage. I've become very sensitive since."

Homestay is Cherprang's first acting job, but two months ago she also appeared in BNK48: Girls Don't Cry, a behind-the-scenes documentary that looks at the joy and pain of these young idols as they struggle to come on top in a system that relies heavily on social media popularity. In that documentary, Cherprang, who's older than most of the band members, comes across as a mature, sometimes tough-minded woman who knows the rules of the game and is willing to play them to her best.

So unlike many rookies, the captain didn't feel nervous on a movie set for the first time.

"I just did what we rehearsed. There were a lot of crew members and cameras, but I concentrated on my co-star, Teeradon. I was my character on set, not Cherprang."

When Cherprang was young, she had an interest in Japanese animation that led her to finding the anime series AKB0048, inspired by the girl group AKB48, which is the model for idol groups like BNK48 and other international "sister bands".

As a fan of the group, Cherprang auditioned for BNK48 because she was curious to know what her idols had been through. Now, she has become a role model for many fans who look up to her and many girls who want to be like her. But in a frank admission, Cherprang showed her clear-eyed perspective. She stated that the group is a business, and that she is a product. "In many cases, I can't make my own decisions. I want to take photos with other people, but I work with the label and I can only take photos at designated events which allow us to meet our fans who support us," Cherprang explained.

Being a captain of the group seems like the coolest job out there. It looks like she is respected and adored by her bandmates. But when we asked what was her most memorable moment as captain, the idol found it difficult to answer.

"To be honest, there were more unimpressive moments. I didn't want to be the captain, but they made me. I had been class president in schools and university and I know it isn't that difficult, but here I have to be the one who sets the boundaries. And most people don't want to be controlled or have any boundaries," Cherprang said.

It's such a burden on her slim shoulders that the captain even considered leaving the group -- or, in the jargon of the trade, "graduating".

For all the ups and downs of the band, Cherprang said she has tried her best, and the group under her lead has grown. "We wish to have larger-scale concerts and have more people accept us. And each member can grow in any direction and make more money," Cherprang said.

Another of her roles is as a student in the faculty of science at Mahidol University International College. In November last year, her instructor's and senior's research about a bluebottle experiment -- on which she was a research assistant -- was published in the scientific journal Royal Society Open Science.

"I was fortunate. I felt bored at that time and was looking for a part-time job, so I asked the instructor if there was anything I could do. And I became the research assistant in that project."

The captain plans to study for her master's and doctorate abroad. Though she still can't make up her mind on which subject she wants to study, she does have an ultimate dream.

"I am interested in lots of things, but I want to study something that takes me to space. I wish to see the Earth from outer space with my own eyes."

Enjoy the vibes of summer at the Mall Group's outlets