Saved by the scooter

The sight of former transport minister Chadchart Sittipunt gliding in on an electric scooter to cast his vote at a school in Ekamai district of Bangkok recently reminded me of a conversation I had with Zachary Wang, the co-founder of Neuron Mobility.

The Chinese-born, Singapore-based entrepreneur believes scooter rentals represent the most practical answer to the traffic and congestion troubles of the modern Asian city.

It's not common to see people getting around on e-scooters in Bangkok, where motorcycles rule the roads -- and the sidewalks in some places. Footpaths crowded with food stalls and uneven pavements also impede movement, while potholes that open up in the rainy season turn commuting into a game of Minesweeper.

On the other hand, Mr Chadchart was one the most popular cabinet ministers in the last civilian government and a well-known supporter of public transport, and when he hops on an e-scooter, he's making a statement. To me, the statement is that this new sustainable personal mobility option could become the next big thing and there might be a push for it in the near future.

If that push comes, Neuron Mobility is ready to answer the call, having already expanded to four cities since its launch in Singapore just three years ago.

"We started in Singapore and then we moved into Chiang Mai, we went out in Bangkok and also in the Greater Kuala Lumpur area," Mr Wang told Asia Focus. "At the moment you can find us at Thammasat University where we have more than 200 scooters within the Tha Phra Chan campus and the uptake has been pretty promising."

The company has also partnered with Sansiri, one of the largest real estate developers in Thailand, to provide e-scooter rentals for residents of some of its condominium complexes, including one in Sukhumwit 77 near the Habito Mall where Neuron got started in Bangkok.

Together, the startup now owns more than 1,000 scooters in three countries and is looking to expand to other countries in Southeast Asia along with Australia and New Zealand.

In Thailand, Neuron hopes to hit the public streets on a bigger scale soon, but the challenge is the unsupportive infrastructure in parts of Bangkok. However, there are "plenty" of areas in the capital with properly maintained and wide enough pavements, Mr Wang has found.

The problem of uneven roads without ramps for people with disabilities or scooters can also be overcome by Neuron's new model, which was designed and built in-house from more than 150 components and launched in January.

"This is the first 12-inch platform in the world, which features much larger wheels than what we used to have," Mr Wang says with enthusiasm.

"The idea for it was to cater to more of the needs of Southeast Asian roads with large potholes and various curves. A larger wheel would actually solve quite a lot of these problems, which is opening up more opportunity for us."

The complete Neuron solution includes the cloud service and the algorithm it uses, plus the physical form factor of the e-scooter that took just nine months to design and build.

But how did this young Chinese entrepreneur arrive at all of these accomplishments? And why did he choose e-scooters and not bike-sharing for Southeast Asia?

Mr Wang was born in Wuhan, the capital of Hubei province in China, and received a scholarship to go to National University of Singapore (NUS) to study mechanical engineering in 2005. Once he graduated with expertise in automotive systems, he stayed in the city-state. He is now married with two children in Singapore and considers it his home.

"Singapore is an interesting place where there's both a Chinese and English environment and it really is where East meets West, which I thought was quite fascinating," he says.

His first job after graduation was with Zeca Powers, a green energy company, which he joined for a short period before the entrepreneurial spirit got to him. 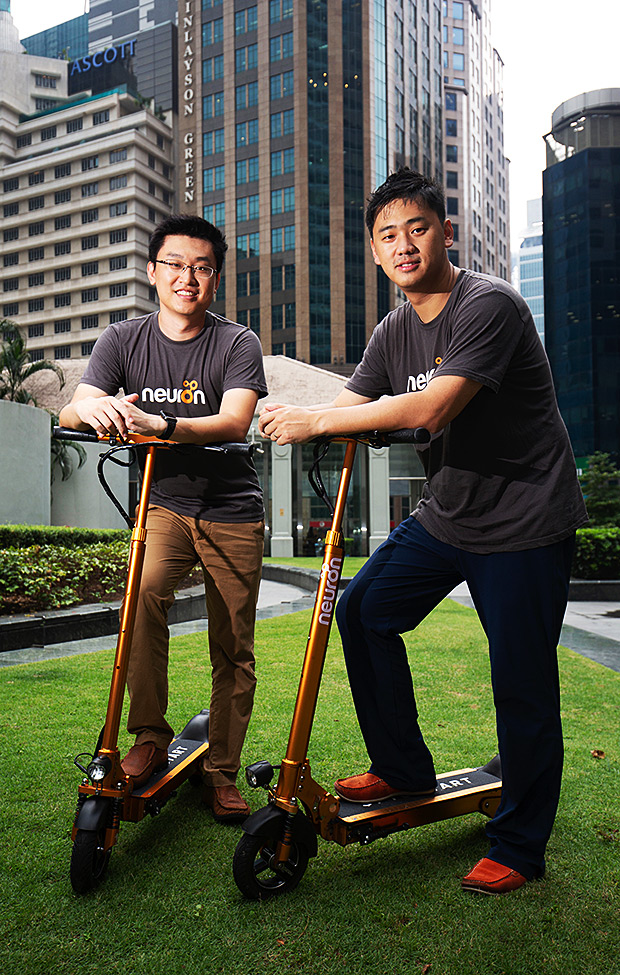 Zachary Wang (right) concentrates on the transport side of Neuron’s business while co-founder Harry Yu deals with the data and algorithms.

Before he joined Zeca in 2010, Mr Wang had already ben working on electric vehicle (EV) projects with NUS for more than two years. He was part of the team that built Singapore's first hydrogen-fuel-cell car that competed in races in Europe.

With his theoretical knowledge and hands-on experience in building an EV, Mr Wang says he was "always passionate" about the EV industry, but there was another calling that was equally strong.

"I always wanted to go into entrepreneurship but I was too young to decide what I really wanted when I graduated at 24," he says. "I decided not to dive into any particular career path because my hypothesis is that if you dive into it, it will be quite hard to come back.

"So I took the conventional option by staying on and worked at the university for a while where I get to do more research on the performance of electric cars and their life cycle for the government, which was a great experience."

Based on his experience, Mr Wang decided to commit himself in the electric mobility and alternative energy field. These green interests coupled with the calling of entrepreneurship eventually led to the formation of Neuron Mobility with co-founder Harry Yu. 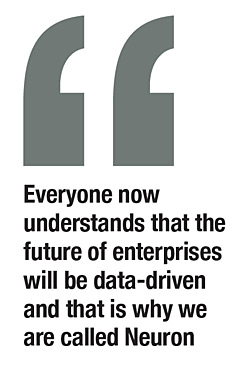 "The overarching theme is sustainability and I have a lot of passion for that," he recalls. "I feel that system problems actually require system solutions, which is not just about developing the next best vehicles but about how you can develop a system around such things to truly make urban transport work."

He then came up with the design for a mobility system but turning it into a viable business a decade ago was difficult, as the startup ecosystem did not yet exist in Singapore. There were no venture capitalists, success stories of startups, or parents who would approve of their children joining such seemingly risky ventures. With the lack of talent, money and success stories, "it was hard for such innovative things to come about", Mr Wang explains.

"The technology was also not ready. It was a time where there was no iPhone or App Store yet, no Internet of Things, so I sort of put the idea on the shelf and decided to go into something that was a bit more commercially viable first, which eventually became Rezeca Renewables."

Mr Wang left Zeca in 2013 to co-found Rezeca in May of the same year. It has since become the leading residential solar engineering company in Singapore with more than 200 completed projects.

"We became one of the pioneers in that space in Singapore which started as a niche business before it became the largest residential rooftop solar provider in the country. That was also the same time that we have ventured out of Singapore."

In 2017, Mr Wang helped co-found Rezeca Engineering, a turnkey EPC (engineering, procurement and construction) company to do rooftop solar installation with German technology in Thailand, as the Kingdom is "one of the best places in Southeast Asia in terms of the adoption of solar" due to government support.

But even though the solar rooftop business was "going well" in Singapore and Thailand with clients such as PTT, it fulfilled only one part of his ambition. His love affair with the EV had yet to find an outlet, until he decided to start Neuron.

"Once you do something a hundred times you realise that it is pretty much repetitive, and by the end of 2015, I said to myself that maybe it was time for me to back to what I have always wanted to do which is electric mobility, and that is how Neuron got started," he says.

Why an e-scooter? If he knew how to build an electric car then why not try to make a business out of that instead of something that most people still think of as a child's toy? His answer is that Neuron is not just about the scooter, it is about the sustainable personal mobility system, and the most important part of that is data.

"Everyone now understands that the future of enterprises will be data-driven and that is why we are called Neuron," he says.

Mr Wang concentrates on the transport side including the physical touchpoints of the business for Neuron, while Mr Yu deals with the data and algorithms.

"But the things that other people cannot see are the ones that have the true value, such as how do you measure your data, how do you run your operation based on data, how to run a product from the data that you have, and how your marketing is being driven by data. And this is what Neuron really is: a data-driven company."

With the soft infrastructure in place, Mr Wang wanted to settle on a simple scooter design. The wheels of his imagination began to turn when he was taking part in EV races in Europe, where he came upon a pioneering bike-sharing company called Vélib'. A Neuron scooter on the streets of Singapore.

"In 2010 when I came up with the idea for the system, there was no e-scooter so the original idea for the form factor of the system was a bike and I came across Vélib' when I was in France and I became fascinated by the system solution to tackling system problems," he recalls.

"But then I stared at these bikes and thought that there must be something wrong. Years later we came to realise that the bicycle is a hundred-year-old invention that cannot be put in a modern city. It's just not right in terms of the form factor."

Mr Wang argued that that bikes are too big, which makes it hard to mobilise them in large numbers. You would need as many as 10,000 at rush hour in Singapore or Bangkok where, for example, there is only space to put around 100 bikes in front of a train station such as Asok.

What's needed, in his view, is something compact that has smaller wheels, does not require a big frame, and foldable to use some of the vertical space, which eventually became the scooter idea.

"I started to build on that concept and it turned out to be a scooter which we eventually realised is the best form factor for our system and the solution to congestion in big cities that we are trying to solve," he reveals with laughter.

Having raised US$3.7 million in December to fuel expansion, Southeast Asia's first e-scooter sharing service is set to shape the future of urban mobility.

There were some setbacks. Neuron and another startup were charged in February with providing personal mobility device-sharing (PMD-sharing) services in public places, in violation of existing regulations in Singapore. Authorities felt the city-state wasn't ready for speedy scooters yet, following reports of a modified e-scooter running down pedestrians last year.

But with feasibility trials in limited urban areas, cooperation with governments to come up with proper regulation and enforcement, there is no reason why a person on an e-scooter should be a rare sight anymore in Bangkok.

Even if scooter-loving Mr Chadchart does not become the next prime minister, he could still run for governor of Bangkok. From that position, he could have an important say in how citizens get around, and scooters could be part of the solution.