Hazing rituals, which are enacted as initiation rites in many schools, can turn viciously violent at times. These “traditional” rites, which trace their origins back to the beginning of the 20 th century in Thailand, usually entail subjecting freshmen to humiliating situations and inflicting various forms of corporal punishment on them, some of which are nothing short of torture.

If the “freshies” resist or fail to comply in manners deemed satisfactory by their tormentors, they may be punished even harder. In recent years several students have suffered serious injuries as a result of such brutal practices, which are widely regarded by those who inflict them as clean good fun. Last July a student at the Rajamangala University of Technology Krungthep was beaten so severely that his spleen burst. The student ended up in critical condition at a hospital’s Intensive Care Unit and his spleen had to be removed surgically.

Such cases are hardly rare in Thai vocational schools, colleges, and universities. In fact, they are fairly common. “The first day we (freshmen) were told to queue up and forced to take the shape of a bridge, then we had water thrown on us and were kicked. After that, all of us had to crawl under the ‘bridges.’ A professor arrived and stopped that but later they took us to a place without a security camera and kicked us”, Kollawach Doklumjiak, who studies political science at Ramkhamhaeng University, recently told the Spanish international news service Agencia EFE. 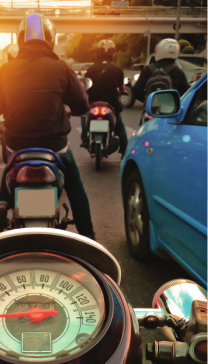 Kollawach, 26, said he had had hot wax poured on his genitals when he was a student at a vocational training institute in Bangkok. “Some of us could not stand it anymore and disagreed with this system but they pressured us until they made us leave the institute,” he said, adding that his attempts to get the police to take action against the perpetrators fell on deaf ears.

Therein lies the problem. Traffic accidents, high rates of gun violence and brutal hazing rituals all remain widespread in large part because of lax law enforcement by police. Traffic laws are routinely flouted by motorists, often in full view of traffic police. Hit-and-runs are common around the country, with drivers often speeding away from accidents in the hope that they will never be caught, or even sought, by police. Crimes in Thailand invariably remain unsolved and there is endemic corruption in local police forces.