While small in numbers, Thailand's Catholic Church boasts a number of magnificent structures in various architectural styles. Life details a number of churches, some of which will be visited by Pope Francis

With his arrival on Wednesday, Pope Francis is interweaving a bridge of love and cordiality during his first visit to Thailand where Buddhists, Christians and Muslims have been living in harmony for centuries.

During the reign of King Narai, the ancient city of Ayutthaya was one of the biggest trading ports, drawing sea merchants from Europe, China, India and Persia, with a group of missionaries aiming to spread the faith in Asia.

This year, the Apostolic Vicariate of Siam celebrates the 350th anniversary of its establishment and many historical churches and Catholic communities joined the occasion by inviting pilgrims and tourists to trace the footprints of early Catholic missionaries.

With Christianity taking root in Thailand, a number of Catholic churches with exquisite interior and exterior architecture have been built. To mark this celebratory occasion, Life visits seven Catholic churches in Bangkok and further afield to explore their historical and architectural significance. 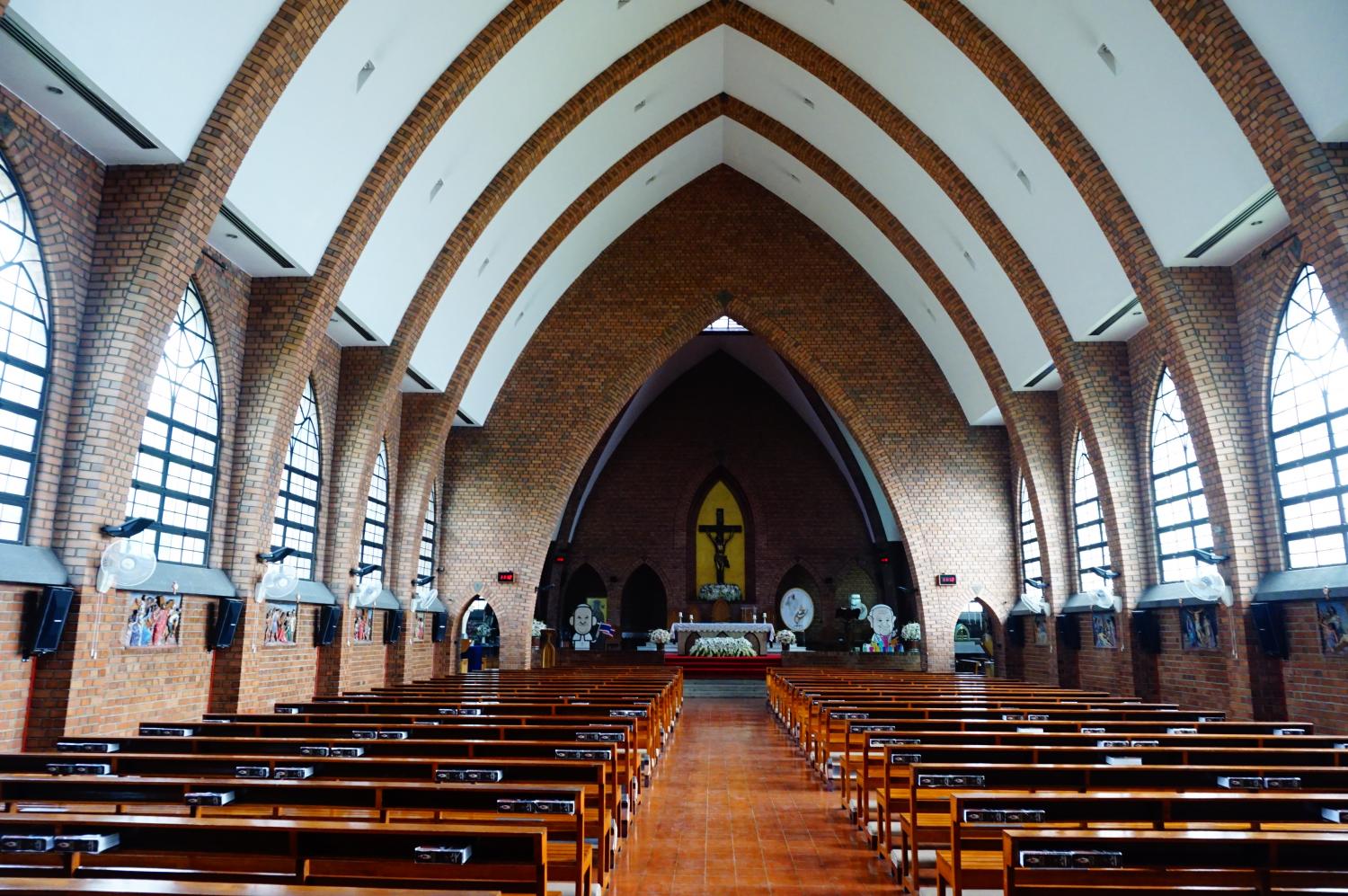 St Louis Church was built in the reign of King Rama V. 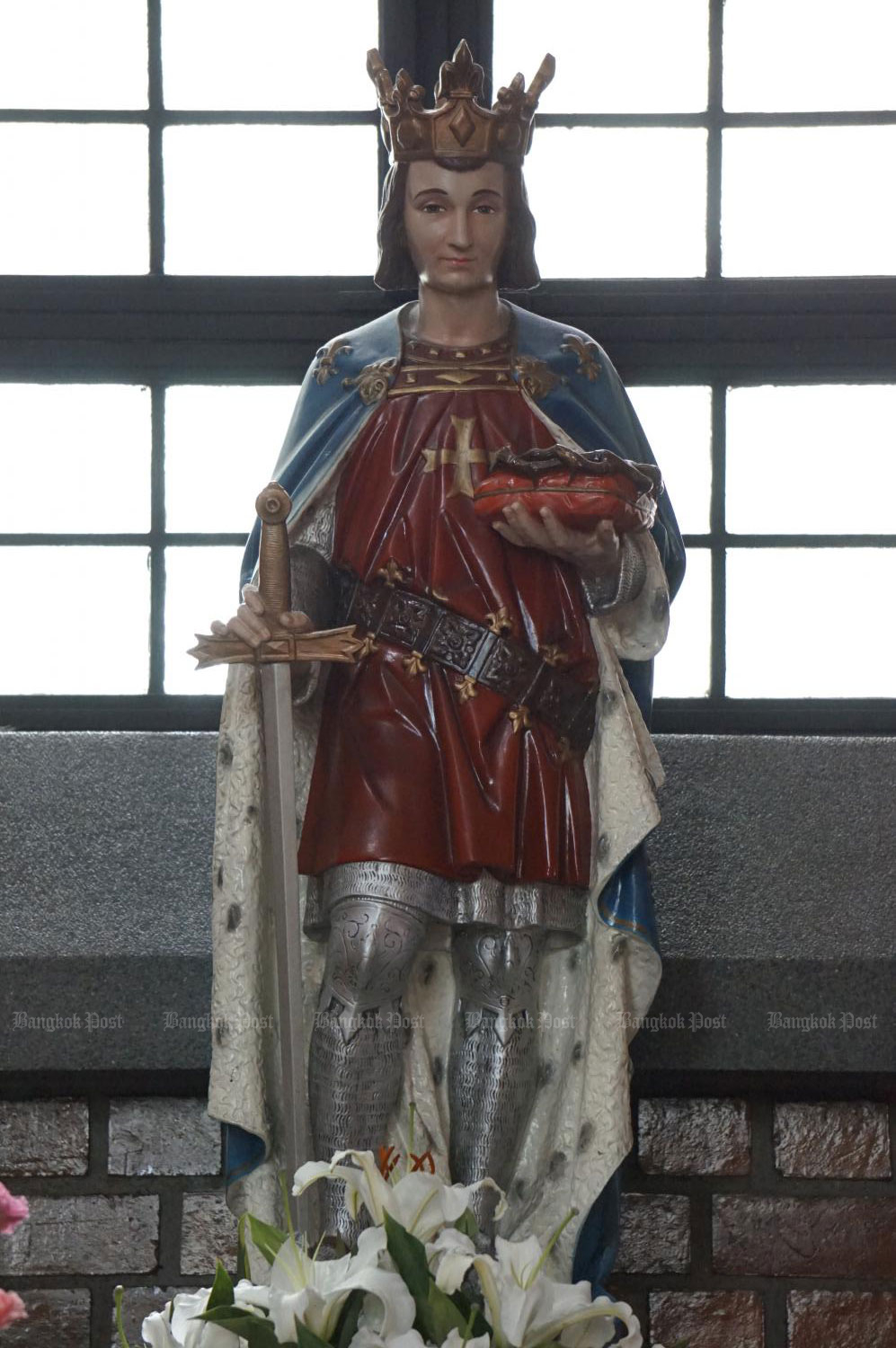 A statue of St Louis.

Its name devotes to Louis IX, the only French king to be canonised a Catholic saint. Dating to the reign of King Rama V, Bishop Jean-Louis Vey set up the hospital to provide local communities advanced medical services and strengthen the relationship between Siam and France after political conflicts.

In 1957, Bishop Louis-August Chorin expanded the complex to accommodate a growing assembly. Simple and venerable in contemporary style, the masonry building is designed to resemble a crucifix with the arched ceiling making it lofty.

Inside, it houses a beautiful Italian marble altar and sculptures of St Louis, Christ and the Virgin Mary. The red-brick walls are graced with a series of 14 colourful stuccoes that depict the chronology of Jesus.

Located in the old neighbourhood of Bang Rak, the iconic 109-year-old Assumption Cathedral has long been a popular hub for Catholic pilgrims in Bangkok. Tomorrow evening, it will be a major site for Pope Francis to celebrate Mass with students. 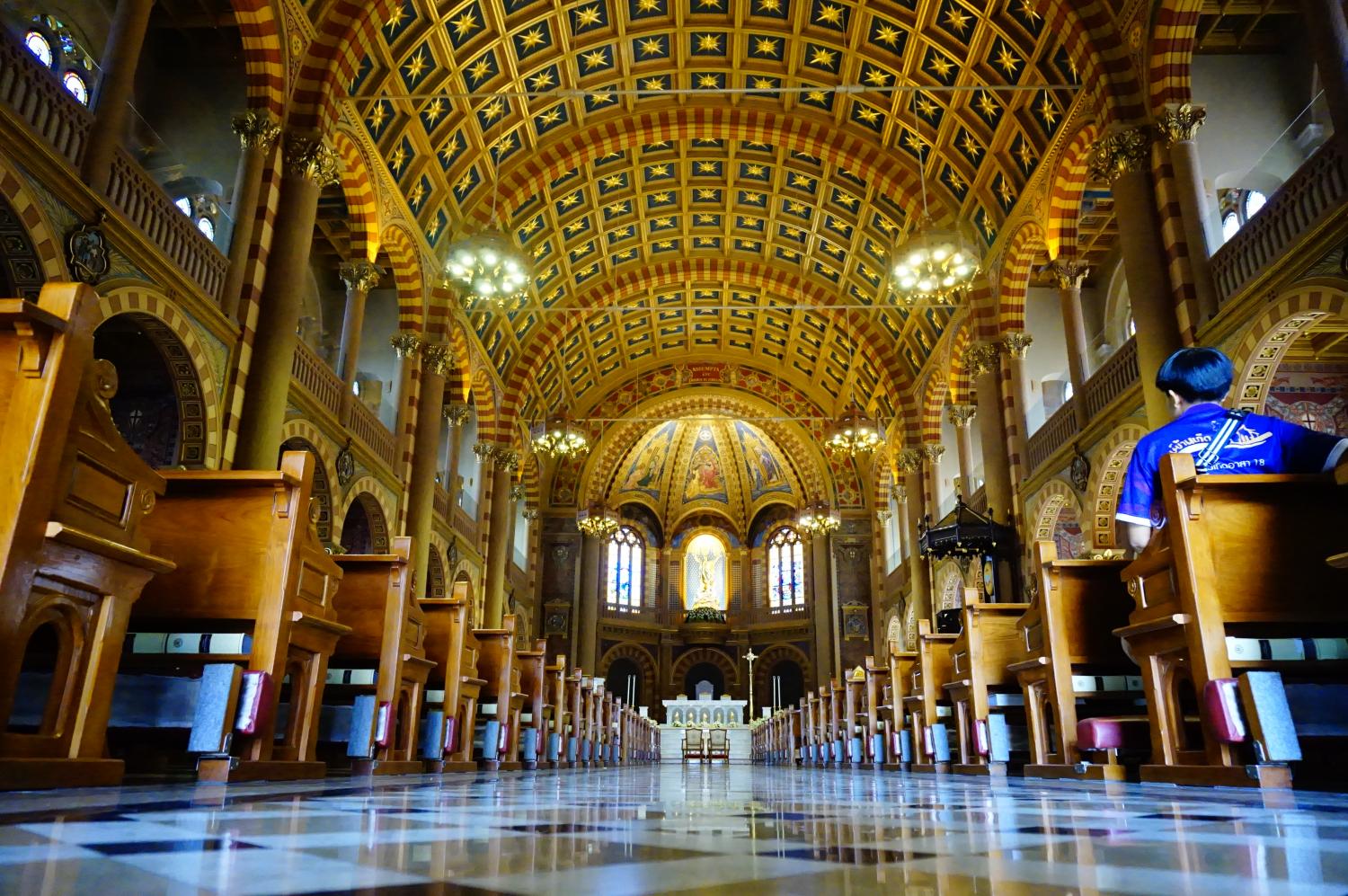 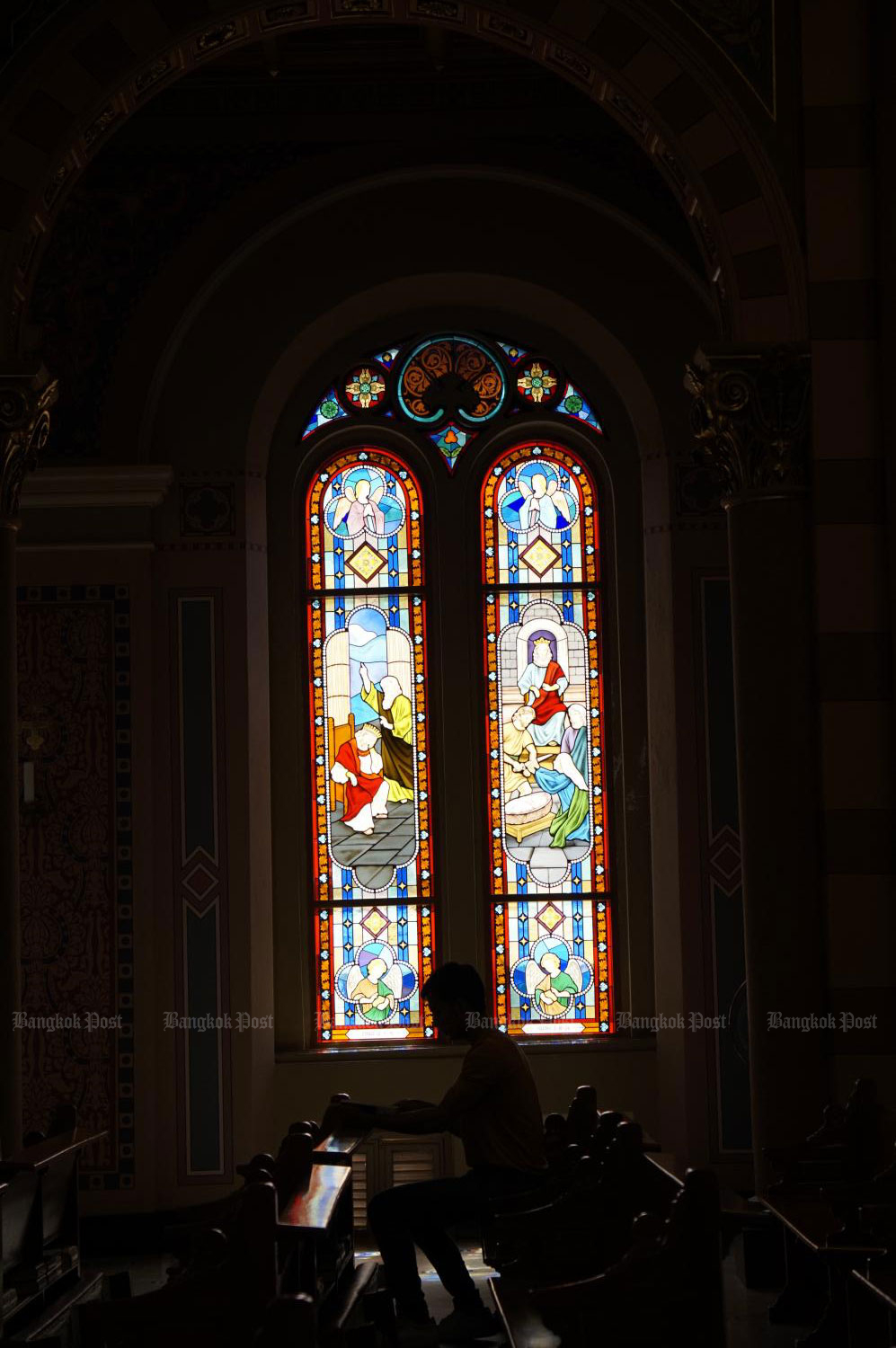 The stained glass windows and murals in Assumption Cathedral.

Sitting on the east bank of the Chao Phraya River, its history began when the original Thai-Chinese style structure was built in 1820 before being replaced with the present building in 1909. Bigger and more elegant, this Renaissance-style sanctuary was designed by a French architect in tribute to the Virgin Mary.

Using first-class materials imported from France, Italy and Singapore, it boasts an exterior symmetric structure with semicircular arches, windows and verandas in Romanesque-style. The interior decor is a mixture of neoclassical and French colonial style, complete with a limestone brick structure and semicircular doorway adorned with different layers of leaves.

Like being in heaven, the high ceiling looks like the night sky with hundreds of shining stars, symbolic of God's favour. The walls are furnished with an astonishing collection of 40 stained glass windows detailing the creation of Earth and humanity and the major events of Christ's life.

Above the grand white marble altar, the impressive murals illustrate the Virgin Mary ascending to heaven. There's also a crypt, home to the remains of bishops and a lifelike wax figure of Blessed Nicolas Bunkerd Kitbamrung, who the church considers to be a martyr for the faith.

Locally known as Wat Kalawar, this parish is located in Samphanthawong district, just 2km from the Assumption Cathedral. 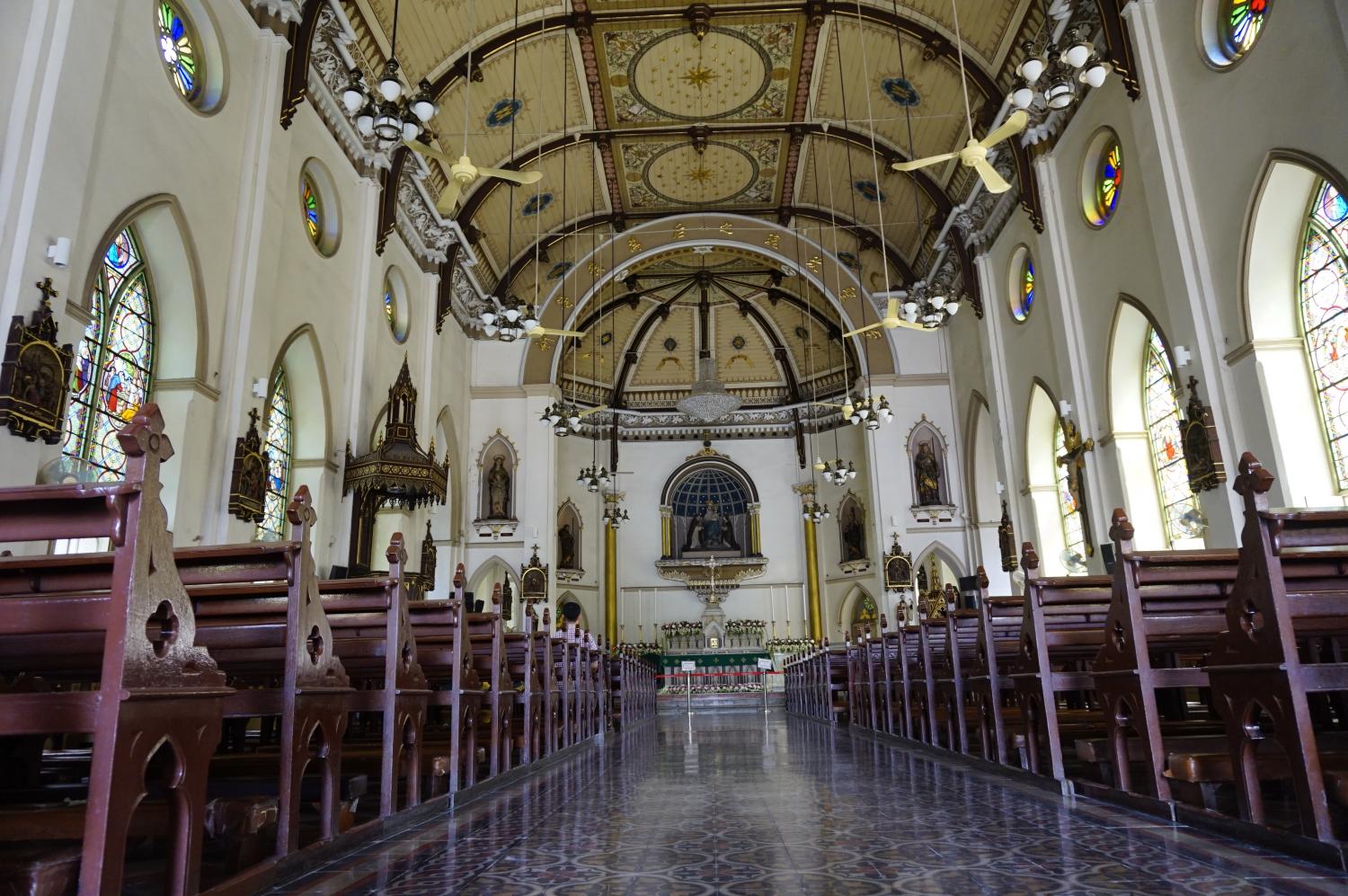 The Holy Rosary Church is designed in a neo-Gothic style.

After the second fall of the Ayutthaya kingdom, a group of Portuguese Catholics, who had spurned the authority of the French Mission, settled on the east bank of the Chao Phraya River and created the wooden Thai-style house in 1787.

The worn-out structure was pulled down in 1838 and Bishop Jean-Paul-Hilaire-Michel Courvezy built a new wooden building on a masonry base. Rebuilt in 1890 by Father Desalles, the construction took seven years and this time was built in a neo-Gothic style with cross-topped spire on the facade. 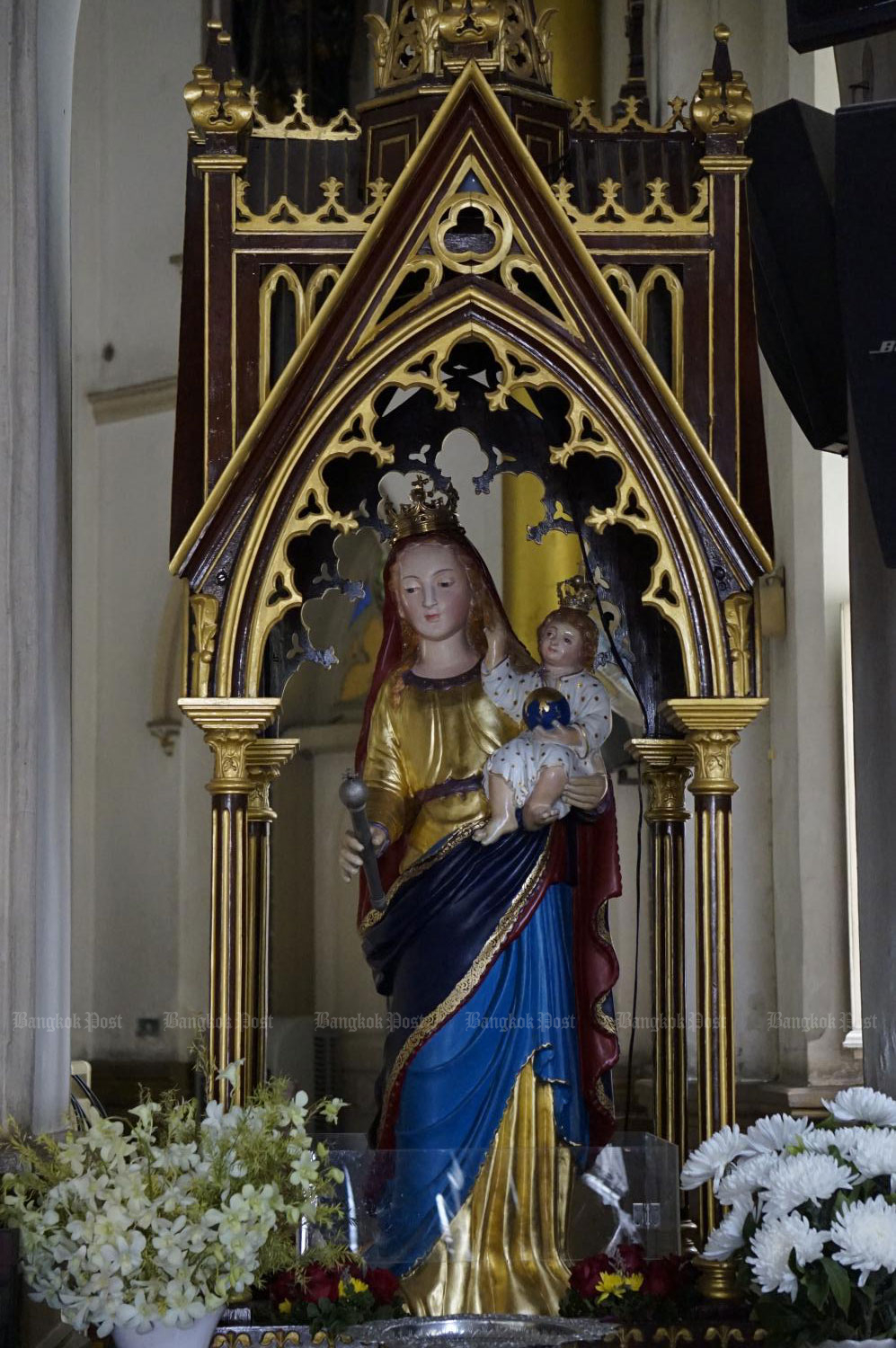 An statue of Our Lady of the Rosary.

Besides a white marble altar featuring St Lucia, St Agnese, St Philomena, St Cecilla, St Agatha, it is enshrined with an archaic statue of Our Lady of the Rosary and a lifelike wooden sculpture of the Corpse of Christ, which shows top-class craftsmanship from the Ayutthaya period.

Another highlight includes a series of 32 colourful stained glass windows and stuccoes depicting both Old and New Testamant.

Crossing to the Thon Buri side, the revered Santa Cruz Church stands on the west bank of the Chao Phraya River and is home to the old Christian-Chinese community, known as Kadeejeen. Santa Cruz Church is on the west bank of the Chao Phraya River.

Dating to 1769, King Taksin allocated the land to Portuguese migrants and allowed French missionaries to build a wooden chapel so that residents could conduct the daily rites. To enhance the facilities, Bishop Jean-Paul Courvezy spent two years reconstructing the new church in a mixture of Thai, Chinese and Western architecture.

In 1913, the church was refurbished in a Renaissance and Neoclassical style. The interior decor is simple yet luxurious with a high, gold-gilded ceiling adorned with hundreds of glittering stars and arched stained glass windows inspired by the life of Christ.

Just a few minutes' walk from Santa Cruz, Navinee Pongthai and her family transformed their Thai-Portuguese wooden house into a cafe-cum-museum called Baan Kudeejeen and boasts an interesting exhibition that explains the history of Portuguese communities from the Ayutthaya era to present.

Here, visitors can take a break with fresh herbal drinks and sample the community's much-loved kanom farang kudee jeen, a cupcake-like pastry that is soft on the inside but crispy on the outside. 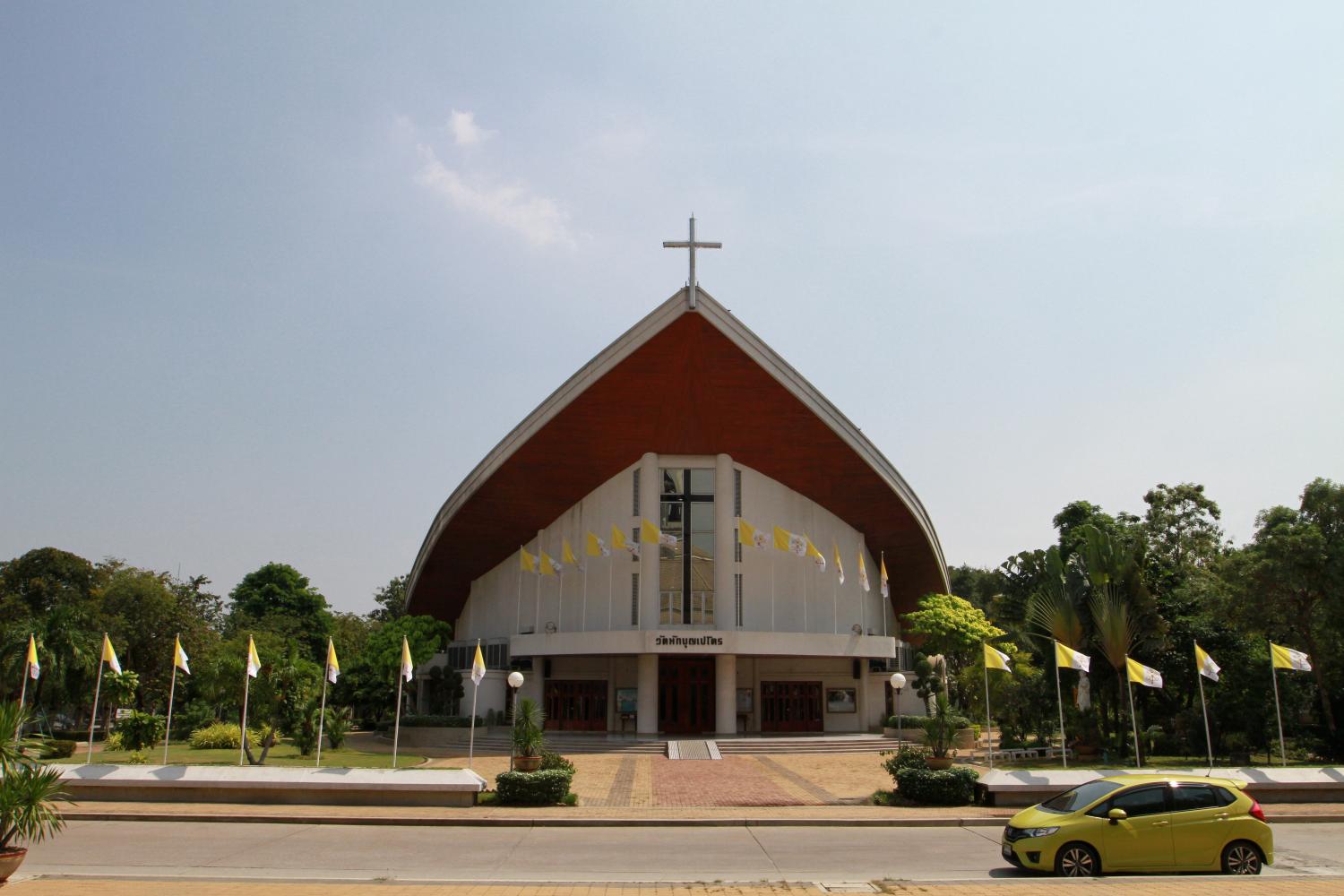 Dating to the reign of King Rama III, Father Albrand cruised along the rivers from Holy Rosary Church to Sam Phran aiming to spread the faith in the Chinese communities. He started by building a mobile seminary with bamboo. In 1886 Father Andre Jeng set up the first mansory building, which eventually became a school.

"The meaning of building a temple is to set up a community. A priest didn't only teach religious beliefs but also educated local residents about agriculture.

"Initially, this area was lined with sugar cane plantations and Father Andre taught villagers to grow rice. We opened a school 160 years ago because we believed that education can help enhance the quality of life," said Father Anusorn Kaewkhachorn, who serves as a director of the Shrine of Blessed Nicolas Bunkerd Kitbamrung.

"We're the second biggest Catholic community following Baan Tharae in Sakon Nakhon. Nowadays, our Chinese-Catholic descendants, who have been working in Bangkok or other countries, will come home during the Chinese New Year celebration. We will conduct the Holy Mass here and then youngsters will perform a dragon dance to maintain Chinese traditions." 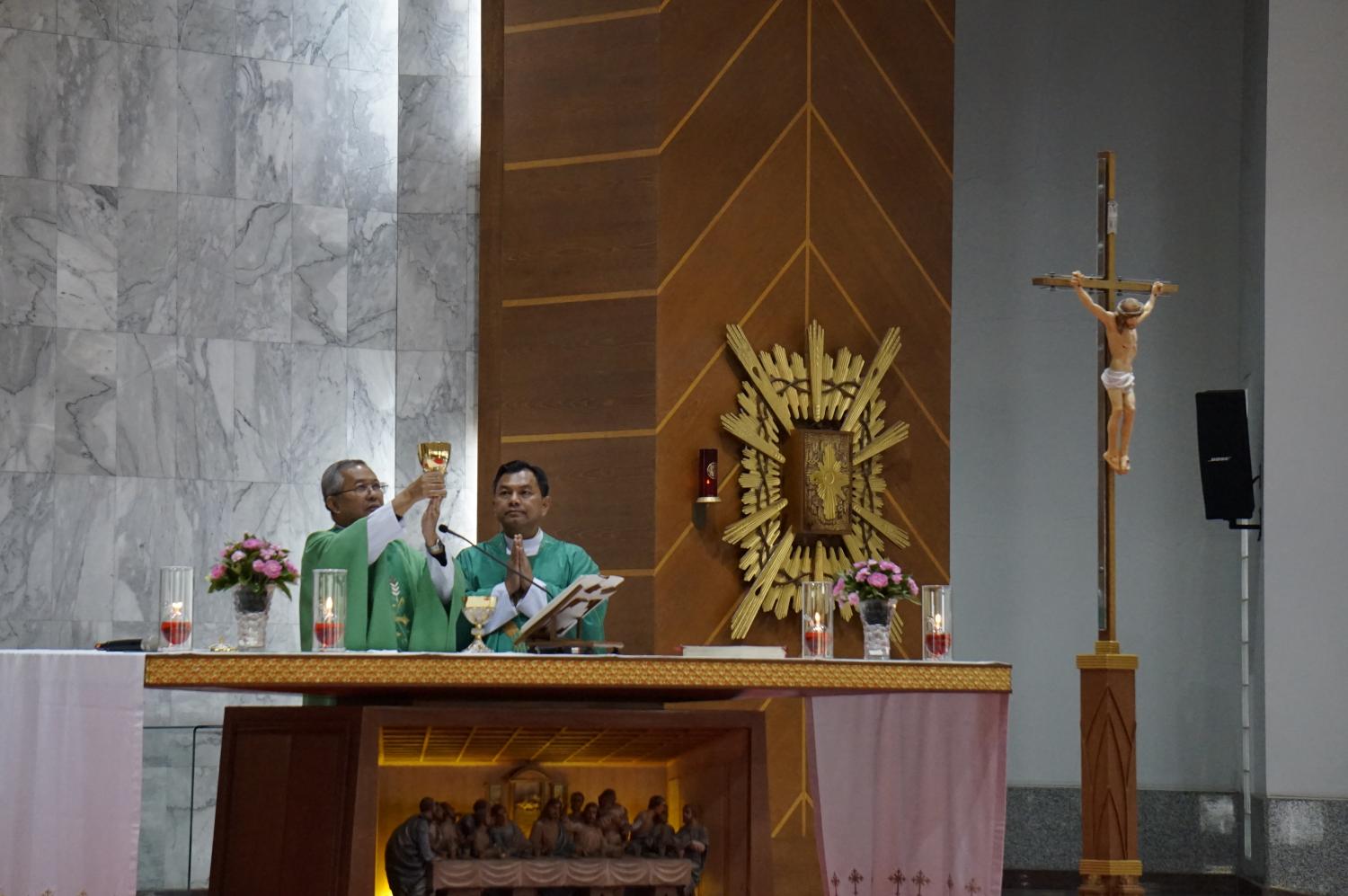 The Shrine of Blessed Nicolas Bunkerd Kitbamrung is reserved for daily rituals.

In 1971, the compound expanded with a striking boat-like church paying tribute to St Peter, who tradition holds was a fisherman. But the church was burned down and the present building was rebuilt in 1989 on the same site.

The design remains the same as the original. Simple but modern, the high wood ceiling and deck encourage visitors to imagine they're boarding a boat to heaven. At the end of the church, there's a white marble altar and a statue of Christ accompanied by a sculpture of the Virgin Mary.

Spread over the 100 rai land, a sacred site was filled with the Shrine of Blessed Nicolas Bunkerd Kitbamrung in 2003 -- a memorial to sacrifice. Its octangular structure refers to the Beatitudes recounted by Jesus in the Sermon on the Mount in Matthew's gospel.

The wall boasts two large oil paintings depicting Blessed Nicolas' life. Alongside, a fibreglass figure of Blessed Nicolas and his relics are enshrined in a glass coffin. A Makha wood altar features carved teak statues from a scene of the last supper. There's also the 100-year-old cemetery behind the church.

The Cathedral of the Immaculate Conception

Perched on the banks of the Chanthaburi River in Chanthaburi province, this is the largest Catholic church in Thailand and is famous for its glamorous neo-Gothic architectural design. 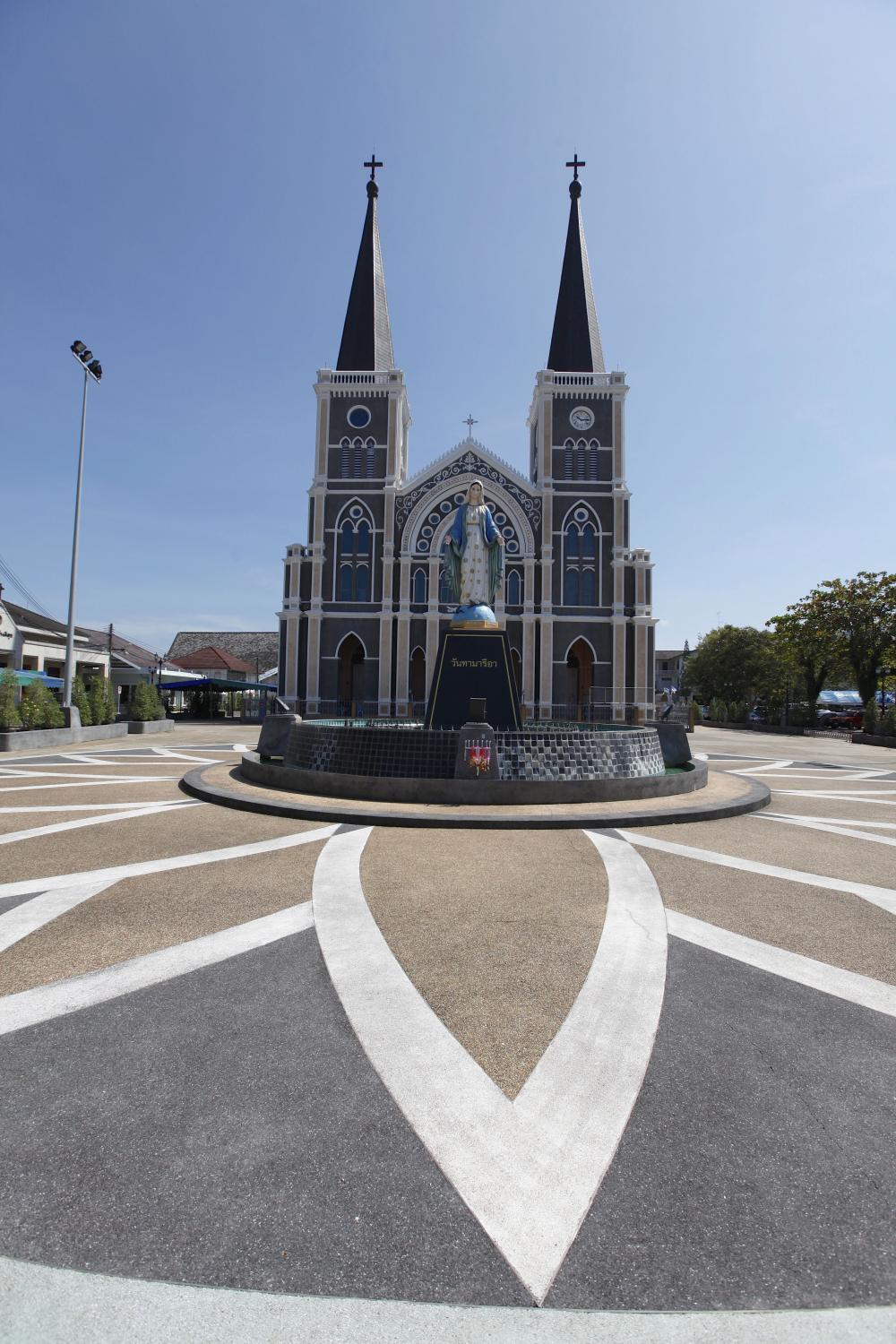 The Cathedral of the Immaculate Conception is famous for its glamorous neo-Gothic architecture Photo: Arthur Jones Dionio

Initially, 130 Vietnamese Catholics and their pastor raised funds for the construction of the Cathedral of the Immaculate Conception in 1711. It was expanded several times and the present structure was built in 1909 on the same site and adorned with stained glass windows and murals. At the front, it houses a statue of the Virgin Mary, graced with more than 200,000 sapphires. 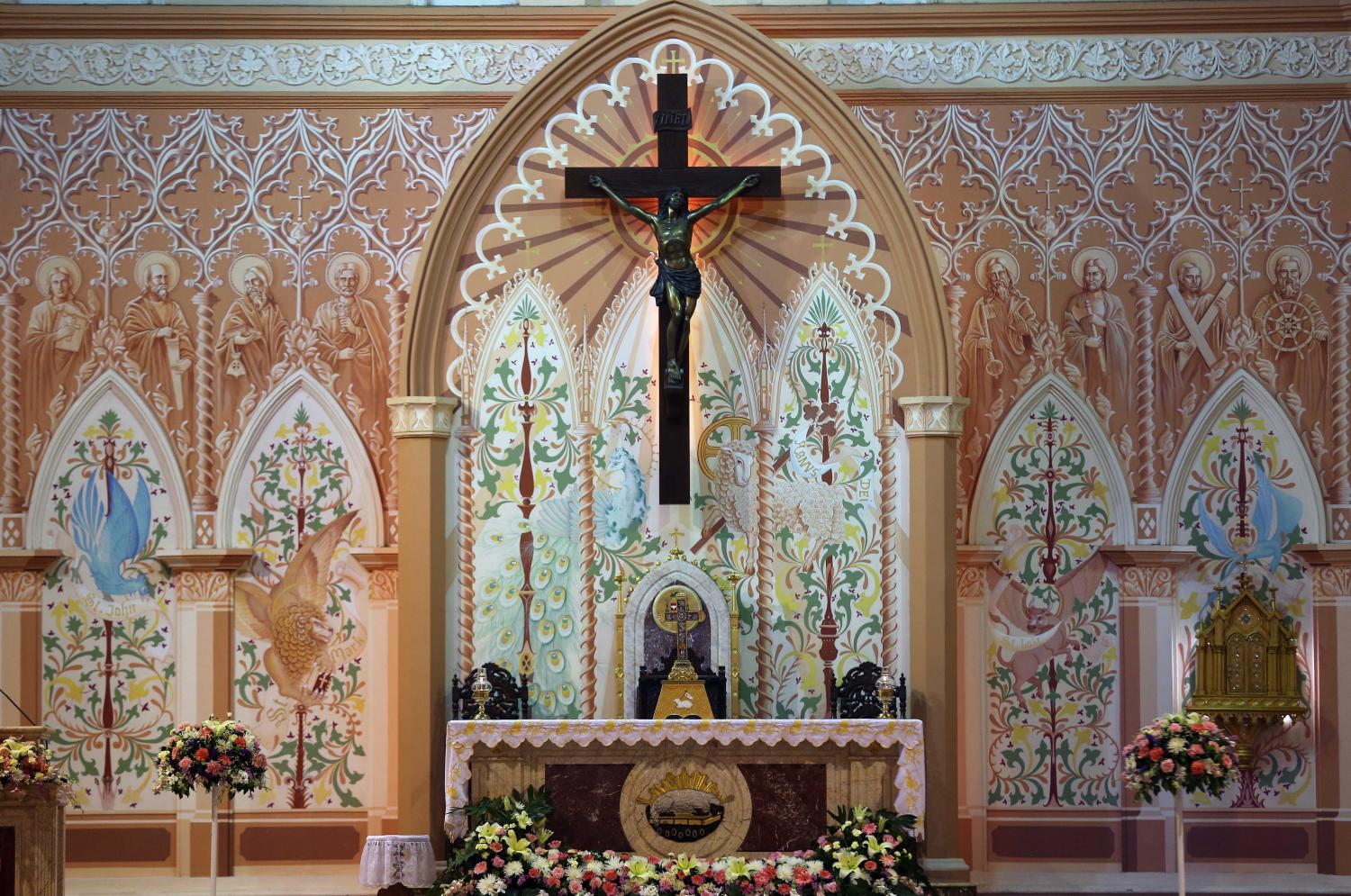 The Cathedral of the Immaculate Conception is famous for its glamorous neo-Gothic architecture. Photo: Pattarachai Preechapanich

Chantaboon was a strategic location for the French during the Franco-Siamese War and also a hub for Thai, Chinese and Vietnamese merchants to trade and exchange spices, gems and jewellery.

Sitting outside the city walls of Ayutthaya, this church was constructed by Bishop Pierre Lambert de la Motte in the 1660s on land that King Narai gave to the Paris Foreign Missions Society. 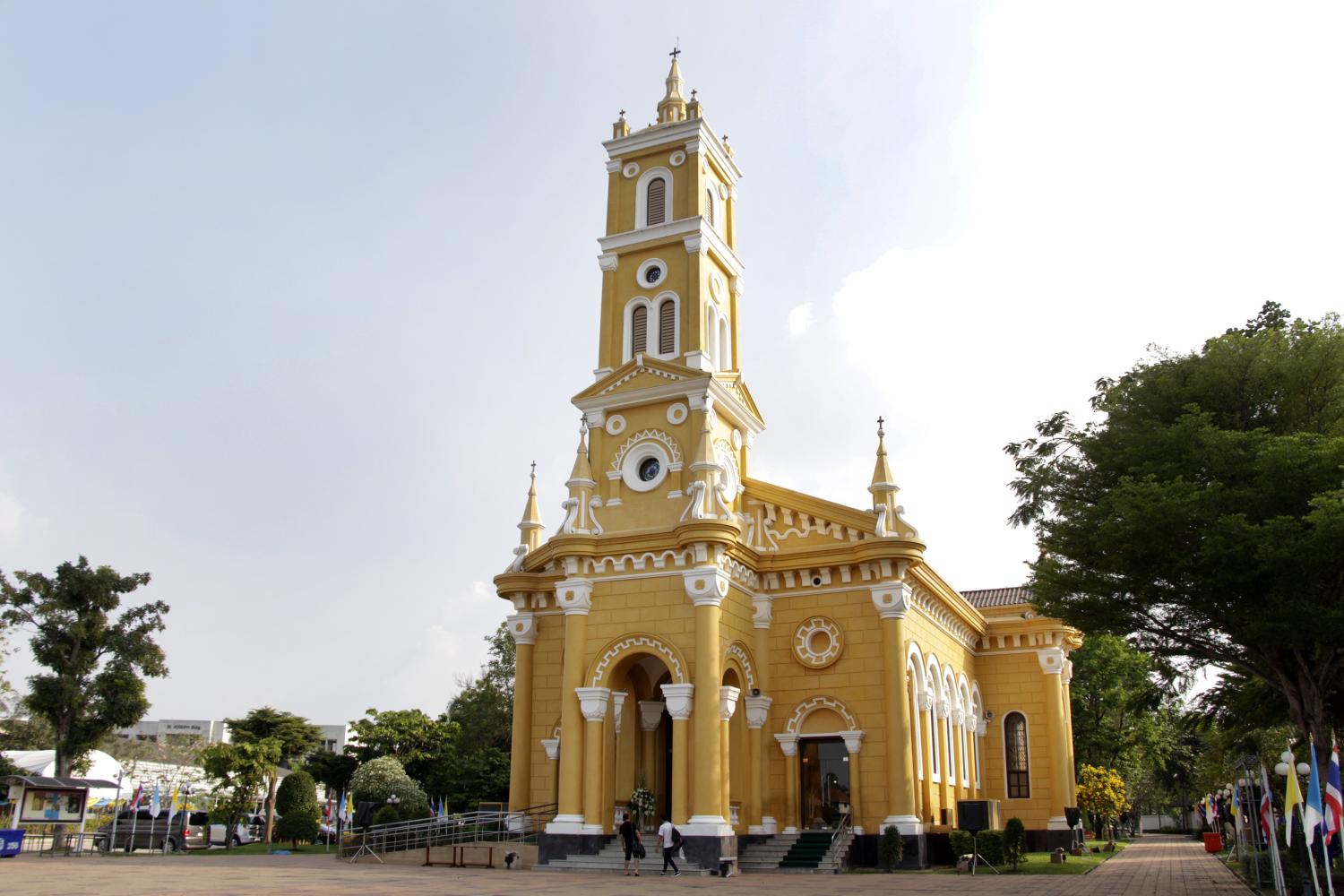 The original wooden structure was rebuilt with bricks in 1685. During the second war with the Burmese, Siamese sought sanctuary in the church, but the invaders burned it down with the rest of the city in 1767. The sanctuary was rebuilt during the reign of King Rama IV and revamped into Romanesque style architecture by French Bishop Jean-Louis Vey in 1888.