When party and play goes wrong

Ten years ago, Pong* went to a party that would change the course of his life. Inside the dim-lit room were a group of five people who were drinking alcohol and taking drugs. When Pong got high on meth, he was caught off guard and ended up having condomless sex.

He felt desperate when he learned that he had contracted HIV because it carried social stigma at the time. However, friends and doctors helped him get through the darkest period. Since then, he has been on antiretroviral therapy (ART) under the universal healthcare coverage scheme and he has never fallen prey to his old ways again.

However, he has noticed a growing phenomenon of this urban hedonistic subculture among young people because drugs are cheap and medical breakthroughs have lulled them into complacency. With the coming of long holidays next week, teens are expected to have drug parties as reported by several newspapers and medical experts have warned that this could bring about a rise in HIV/Aids cases.

In light of this, Life sat down to talk with experts about the impact of chemsex -- a party sex that occurs under the influence of drugs -- and the surge of sexually transmitted infections (STIs). 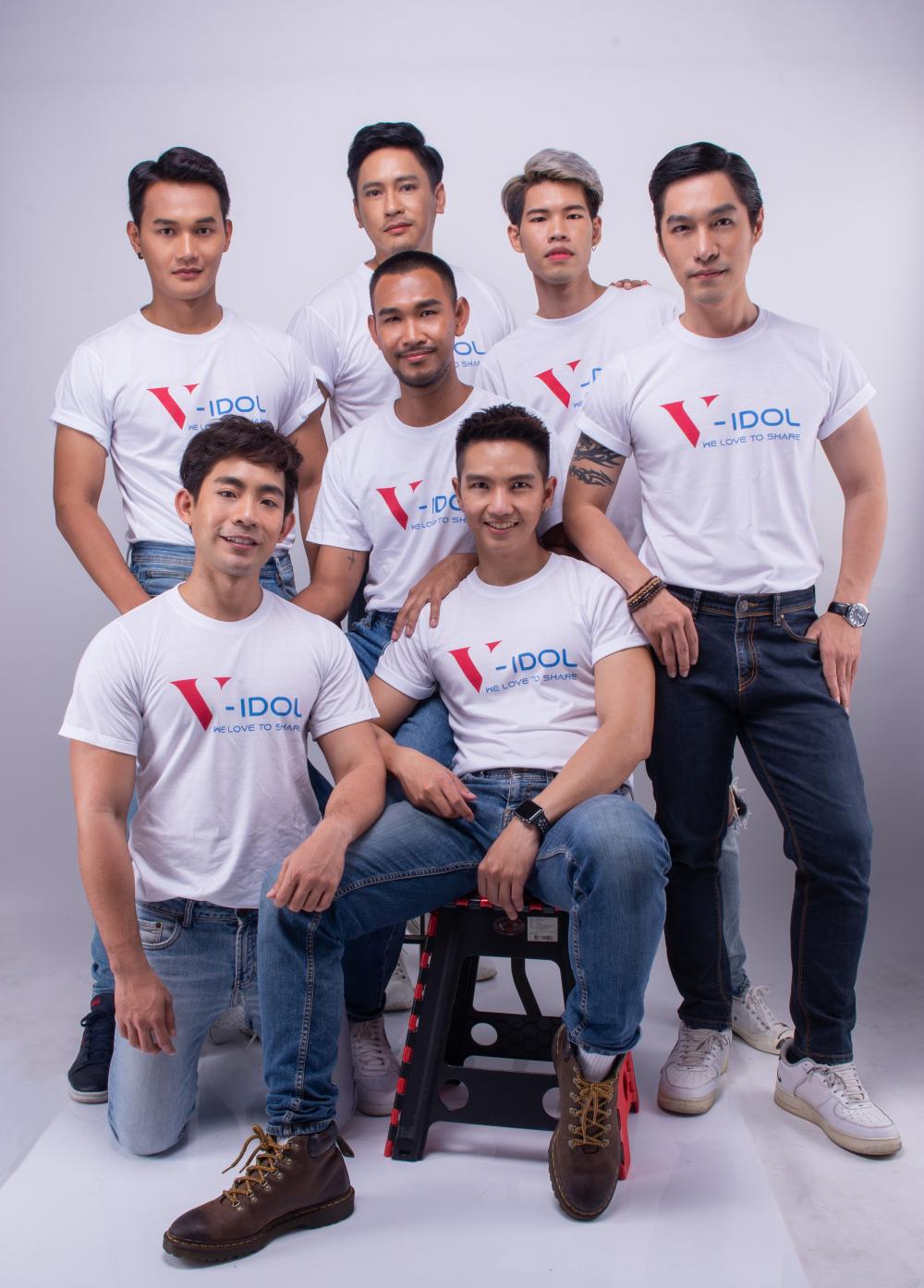 The V-IDOL project aims to educate the public about sexual health and offers free support in terms of blood tests and pills. V-IDOL

Chemsex in the dark

Pawat Borisut, HIV/Aids and STIs campaign manager for the Bangkok Rainbow Organisation, said the number of those in the party scene is growing. They include people who inject drugs (PWID) and people who use drugs (PWUD). The PWID group used to put soluble substances like heroin in their bodies but are now changing to other substances. The PWUD group inhale drugs, including ecstasy, meth, amphetamines, ketamine, and cannabis.

"They use drugs to arouse sexual desire and enhance sex. However, there are side effects. For example, those on meth will experience erectile dysfunction and hence take viagra and wear cock rings. Most of them don't use condoms and have sex for days and nights. This group includes those who take PrEP (pre-exposure prophylaxis) to avoid using condoms. This can increase the number of STIs," he said.

PWID and PWUD are also at risk of HIV. There are 82,045 people living with HIV in Bangkok. He said while some who don't know their HIV status can infect others, some develop drug resistance because they have prolonged sex under the spell of drugs that they fail to take antiretroviral medicine on time.

Pawat said those who practise chemsex often meet at five-star hotels instead of their own apartments on weekends because they are provided tight security. Moreover, prices have fallen during the coronavirus outbreak. They communicate via group chats on the messaging app Line. For example, he has joined 10 group chats that each contain 400 members. They also use symbols, like syringes, aeroplanes, and snow, on dating apps to hook up new partners.

"They will send messages like: "Are you up for the [chemsex] party?" and "I have stuff [drugs]" to show interest. Many of them who are rich use chemsex to prey on targets. Some victims are afraid to report to the police," he said. 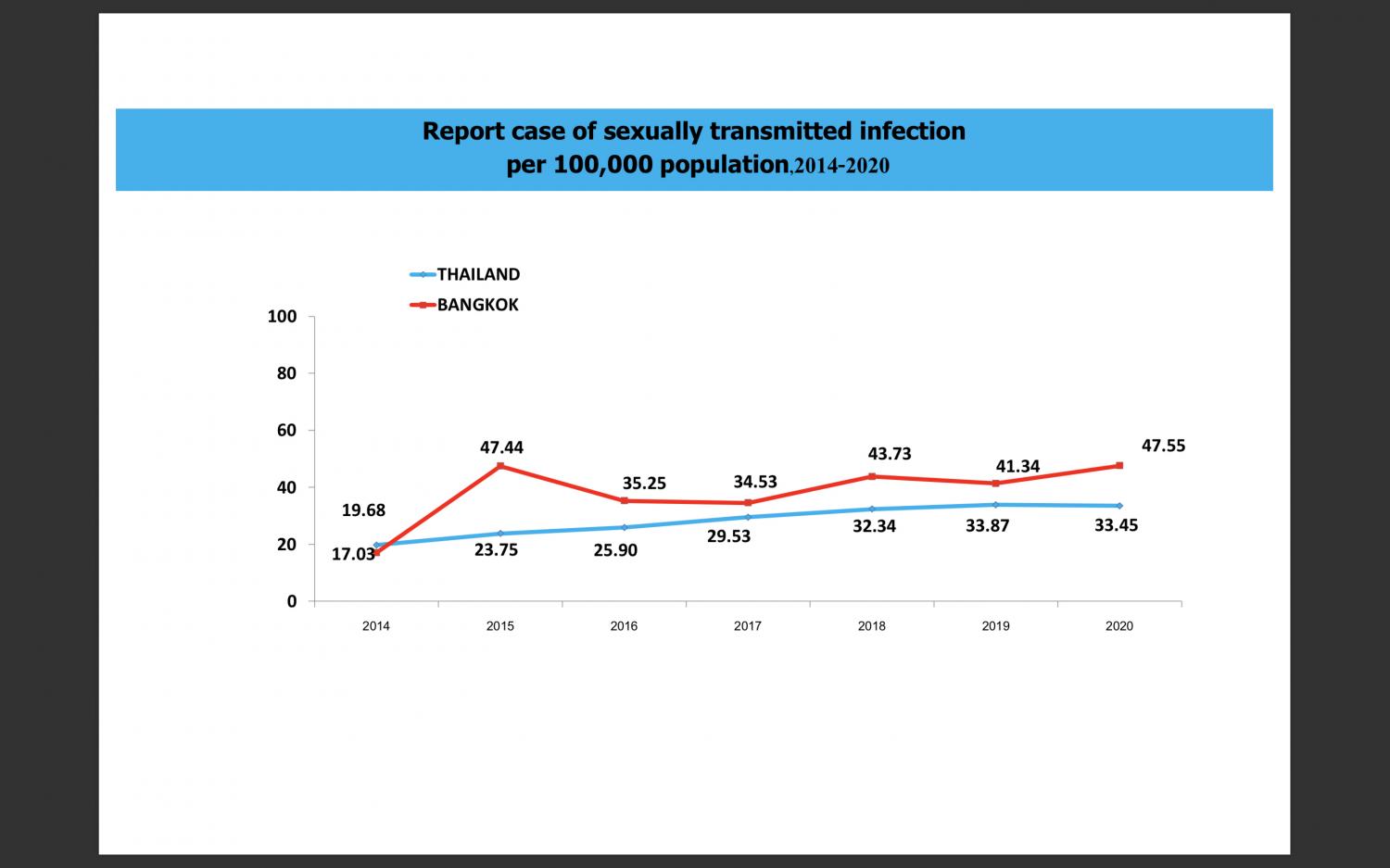 Statistics show a jump in the STI rate to 47.55% in 2020, up from 34.53% in 2017. The Aids, TB, and STIs Control Division of the Department of Health under the Bangkok Metropolitan Administration (BMA) 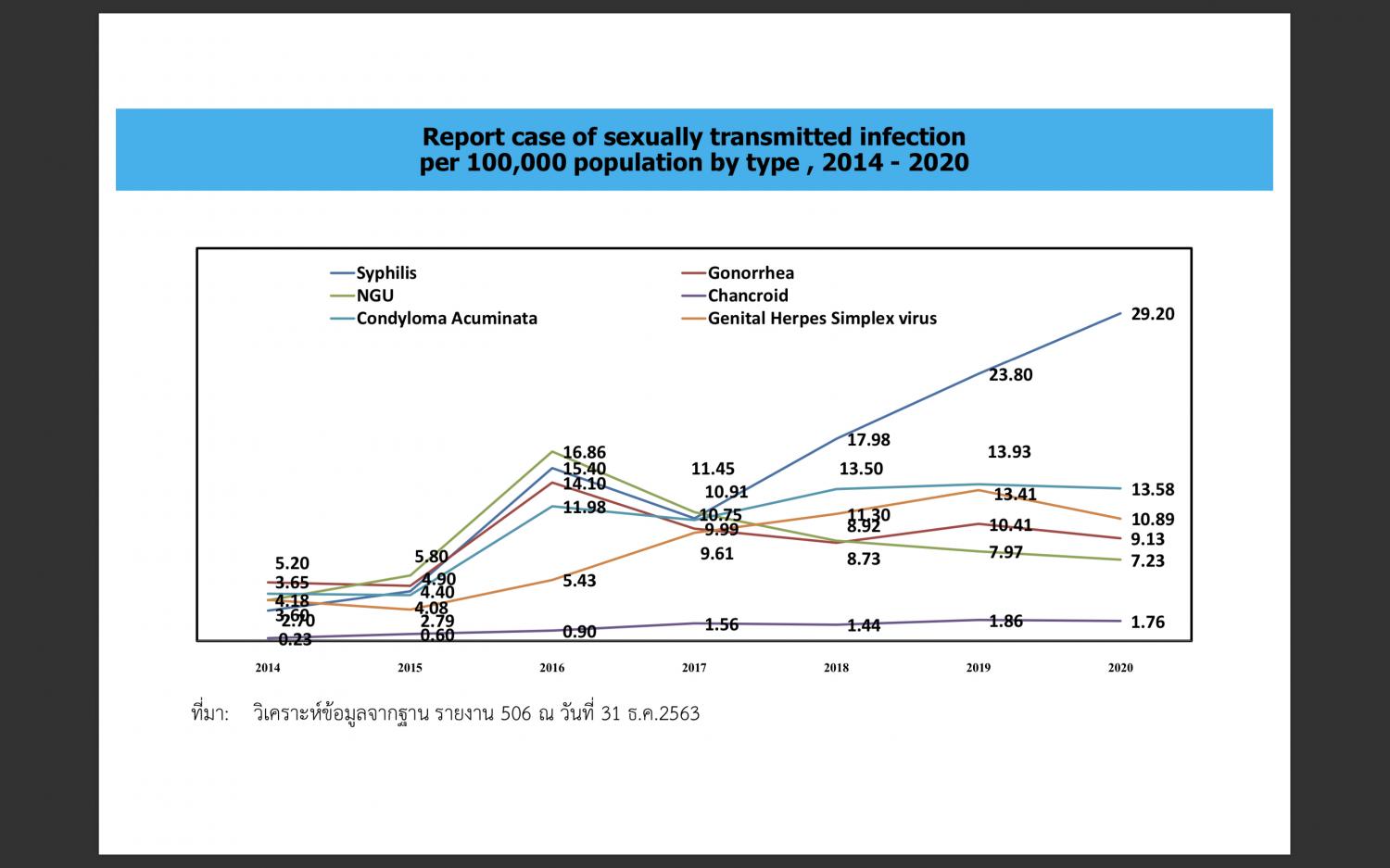 There has been a staggering increase in the number of cases of syphilis, followed by condyloma acuminata and genital herpes. The Aids, TB, and STIs Control Division of the Department of Health under the Bangkok Metropolitan Administration (BMA)

Unfortunately, the government is failing to curtail the chemsex scene. Dr Nattinee Isarankura, director of the Aids, TB, and STIs Control Division of the Department of Health under the Bangkok Metropolitan Administration (BMA), said "there is no data on the population" because this group remains inaccessible.

"Only 60% of people [in Bangkok] use condoms. They are more scared of Aids than STIs, which are curable, so they take PrEP (pre-exposure prophylaxis) without using condoms," she said.

Dr Nattinee said the surge of STIs, especially syphilis, will raise the rate of HIV infection because it means they have condomless sex and only some of them have access to PrEP. Syphilis can be easily transmitted because it is a bacterial infection. It is the most prevalent among those aged 15-24 years old and more common in females. 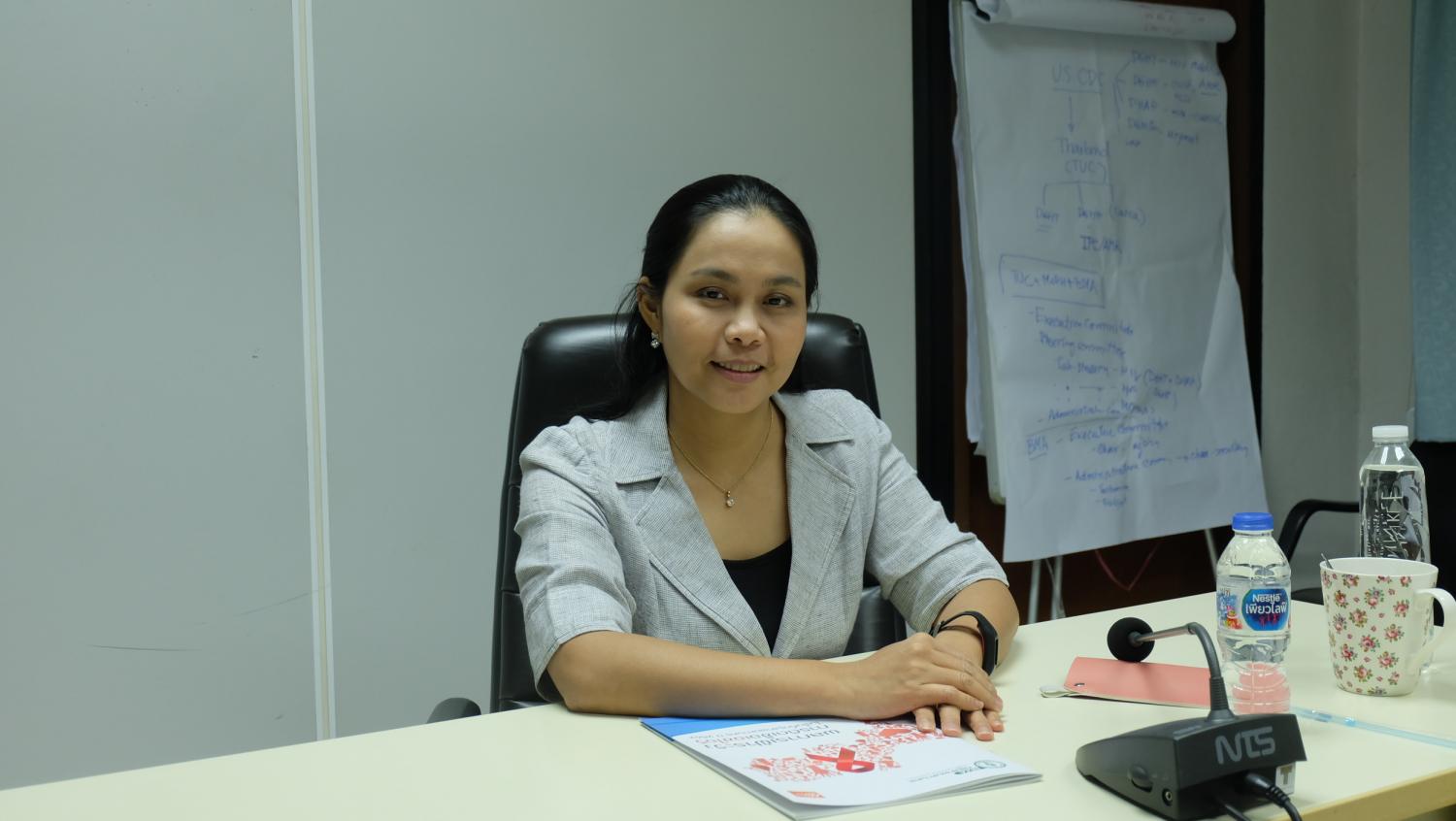 Dr Nattinee Isarankura, director of the Aids, TB, and STIs Control Division of the Department of Health, warns that the surge of STIs will raise HIV infection rate.

"Many teenagers also buy drugs over the counter instead of seeing doctors. They think they can cure themselves but it is not true. They can continue to infect others because the disease can stay latent [for years]. Patients with STIs must take the full dose otherwise they will develop drug resistance and have to take new medicine," she said.

She stressed the use of condoms among key populations, especially men who have sex with men (MSM) and transgenders, for the prevention of HIV/Aids and other STIs. This year, Bangkok will likely log 1,165 new HIV cases, the highest, accounting for 19% of the country's tally of almost 6,000. The BMA plans to cut it to less than 400 by 2030.

Asst Prof Dr Opass Putcharoen, chief of Chulalongkorn Memorial Hospital's Centre of Emerging Infectious Diseases, echoed the same view at an online forum on HIV treatment guidelines held by Bioscience last week. The main message was that not using condoms can result in a surge of venereal diseases.

"HIV treatment has improved a lot. However, some misunderstand that if they take PrEP, they won't be infected so they are lax in using STIs preventive measures. Others who take ART drugs and have U=U don't use condoms," he said.

He stressed that ART drugs will diminish viral load in the blood to an undetectable level over time. It doesn't equate to zero but it means the virus can't be transmitted to sex partners. However, ART is a long-term treatment. If patients stop taking ART medicine, the virus will come out of reservoir cells. Patients should check HIV viral load once a year. The National Health Security Office reported that 40,966 people living with HIV in Bangkok were on ART last year. 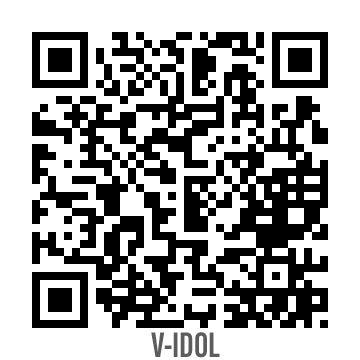 People can consult volunteer idols for free by scanning this QR code. V-IDOL

HIV and STIs are increasing partly because some people don't know their status. The Los Angeles-based AIDS Healthcare Foundation has been working with the Bangkok Rainbow Organisation on the V-IDOL project for five years to educate the public about sexual health and offers services -- blood tests and PrEP and PEP pills -- for free. The project runs from April 1-June 30.

Attaphon Thanomkiat, one of the seven volunteer idols, said around 180 people consulted with them and over 100 took blood tests last year. They expressed concern about the stigma of promiscuity, reactions from medical personnel, and fear of infection status.

"People also ask what they should do in case of condom leakage. I advise them to take PEP (post-exposure prophylaxis) within 72 hours of sexual intercourse and go to LGBTI-friendly clinics," he said.

"Blood tests will help detect not only Aids/HIV but also STIs, which are silent killers. Medically speaking, it is good to know your status," he said.