Jaeger-LeCoultre honours its Atmos line at Homo Faber in Italy

A clock that intriguingly runs on air, Atmos steals the spotlight from the swivelling Reverso and other Jaeger-LeCoultre timepieces. 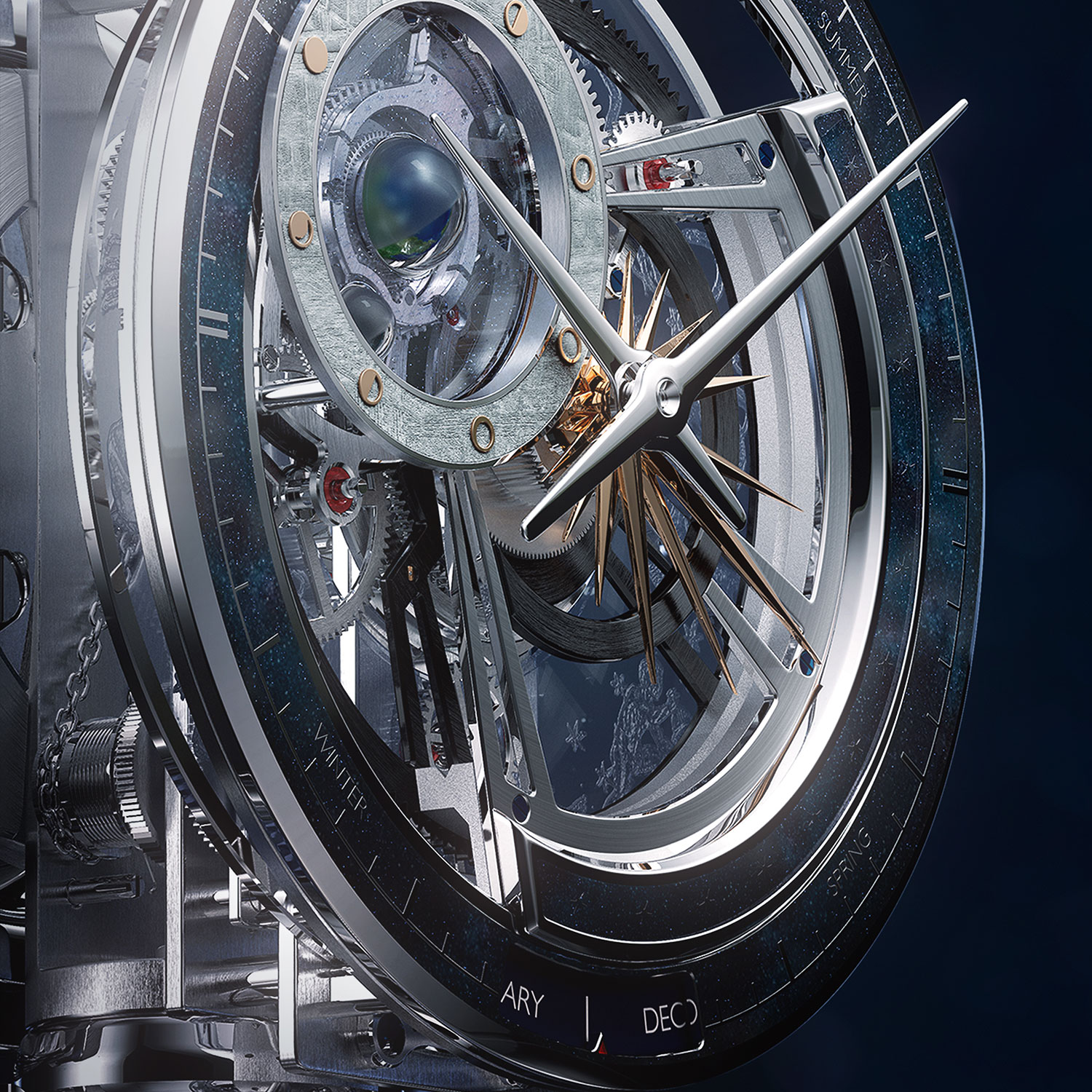 The fascinating clock seems to defy the laws of physics by ticking independently and drawing its energy from infinitesimal variations in ambient air temperatures, made possible by a hermetically sealed, gas-filled capsule connected to the clock's drive spring by a membrane.

The slightest temperature variation changes the volume of the gas, causing the membrane to "breathe" like the bellows of an accordion and wind the spring. A fluctuation of just 1C provides the clock with an operating autonomy of about 48 hours, enabling it to run perpetually under normal everyday conditions.

The prototype, now known as Atmos 0, was invented by radiological engineer Reutter in 1928. Since the 1930s, Jaeger-LeCoultre has continuously made technical improvements and aesthetically made the clock a prized objet d'art.

The Atmos I, with its glass dome cabinet, is an early and exceptionally pure expression of Streamline Moderne style, while the Atmos II is housed in an Art Deco style glass cube. Along with reinterpretations, Jaeger-LeCoultre has collaborated with renowned designers and master artisans on special editions.

With a black lacquered dial composed of two concentric circles, the new Atmos Infinite is an ode to transparency and minimalism. 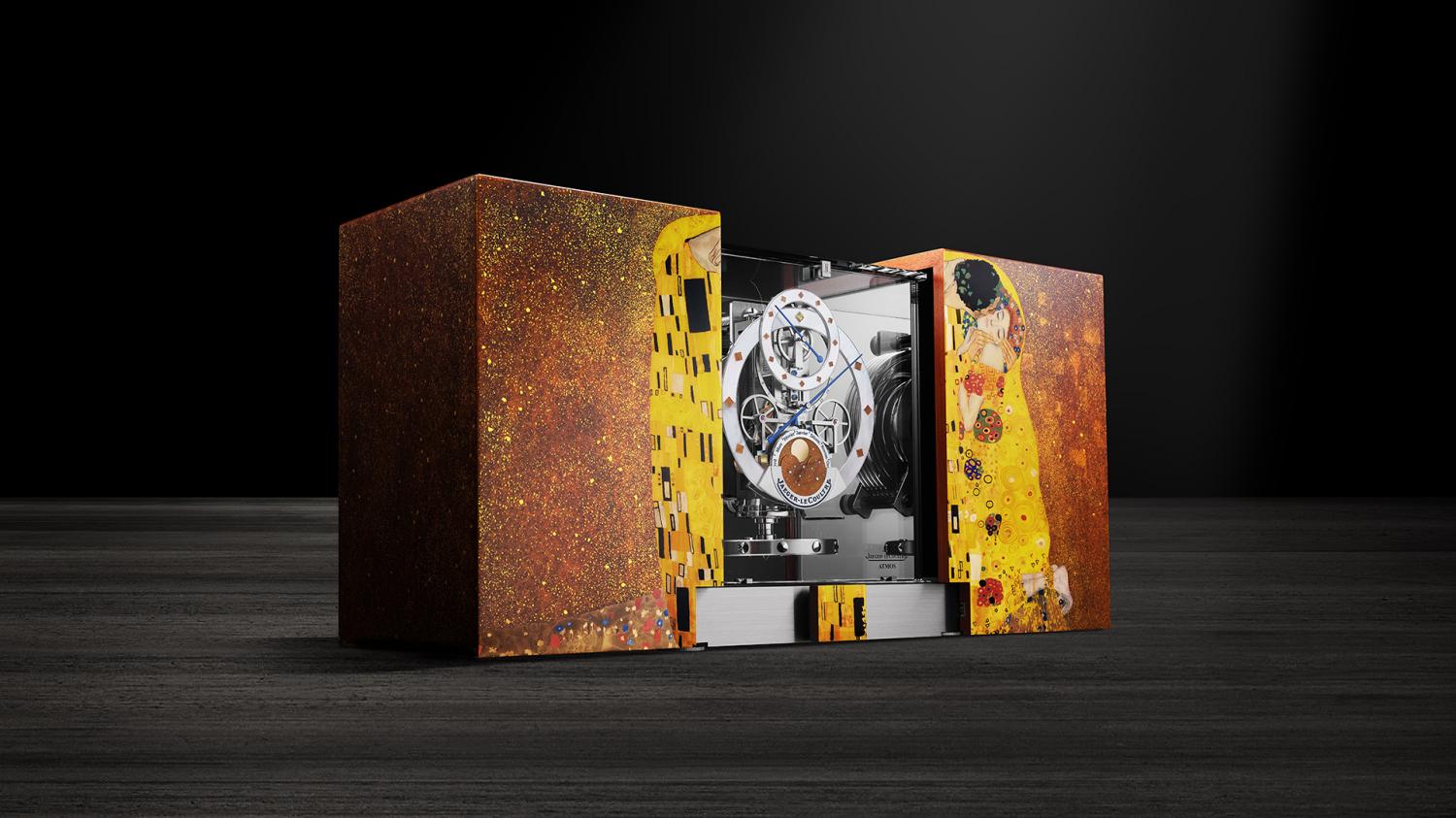 Apparently floating freely within the glass cabinet, the mechanism is held in place by virtually-invisible glass supports, which allows an unrestricted view of elements, including the bellows, chains and gears that keep the clock moving.

The construction of the Jaeger-LeCoultre Calibre 570 has been pared back to the essentials, following the minimalist approach.

For more than four years, the Swiss watchmaker worked on the most complex version, resulting in the Atmos Hybris Mechanica Calibre 590, nicknamed Atmos Tellurium.

The new complication reproduces the true cycles of the Earth, Sun and Moon, displaying in three dimensions and in real-time their relative positions and rotation. Moreover, the movement with a fully-integrated tellurium complication also indicates the corresponding months and seasons with a zodiacal calendar. 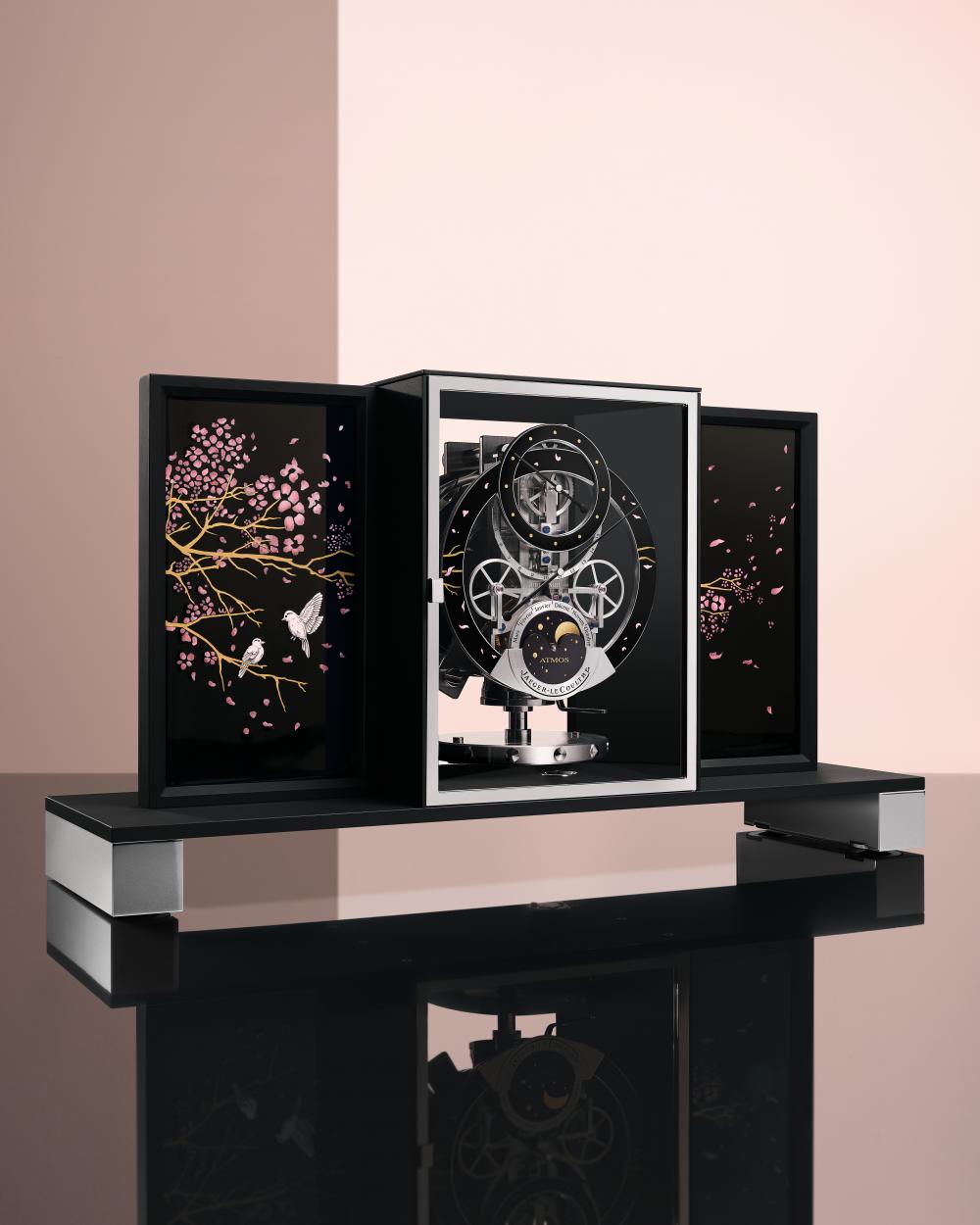 A peripheral ring comprises a fixed upper layer marked with an hour-and-minute track and the four seasons, while a mobile ring indicates the months, appearing in an aperture at 6 o'clock. Set within this frame is a disc of translucent blue sapphire crystal, laser-engraved with the zodiac signs.

The dial is centred by the Sun, represented by a burst of polished golden metal rays. Close to the peripheral ring, balanced by a wedge-shaped counterweight, a meteorite circle frames a transparent sapphire disc set with a spherical Earth and Moon.

This entire Earth-and-Moon disc orbits around the Sun, making a complete rotation in one solar year, indicating the seasons as it turns. Jaeger-LeCoultre's watchmakers have succeeded in establishing a cycle of 365.2466 days, which is so close to the reference value of 365.2425 days in the Gregorian calendar.

The new Calibre 590 was entirely conceived and constructed within the Atmos atelier at the manufacture in Switzerland's Vallée de Joux. 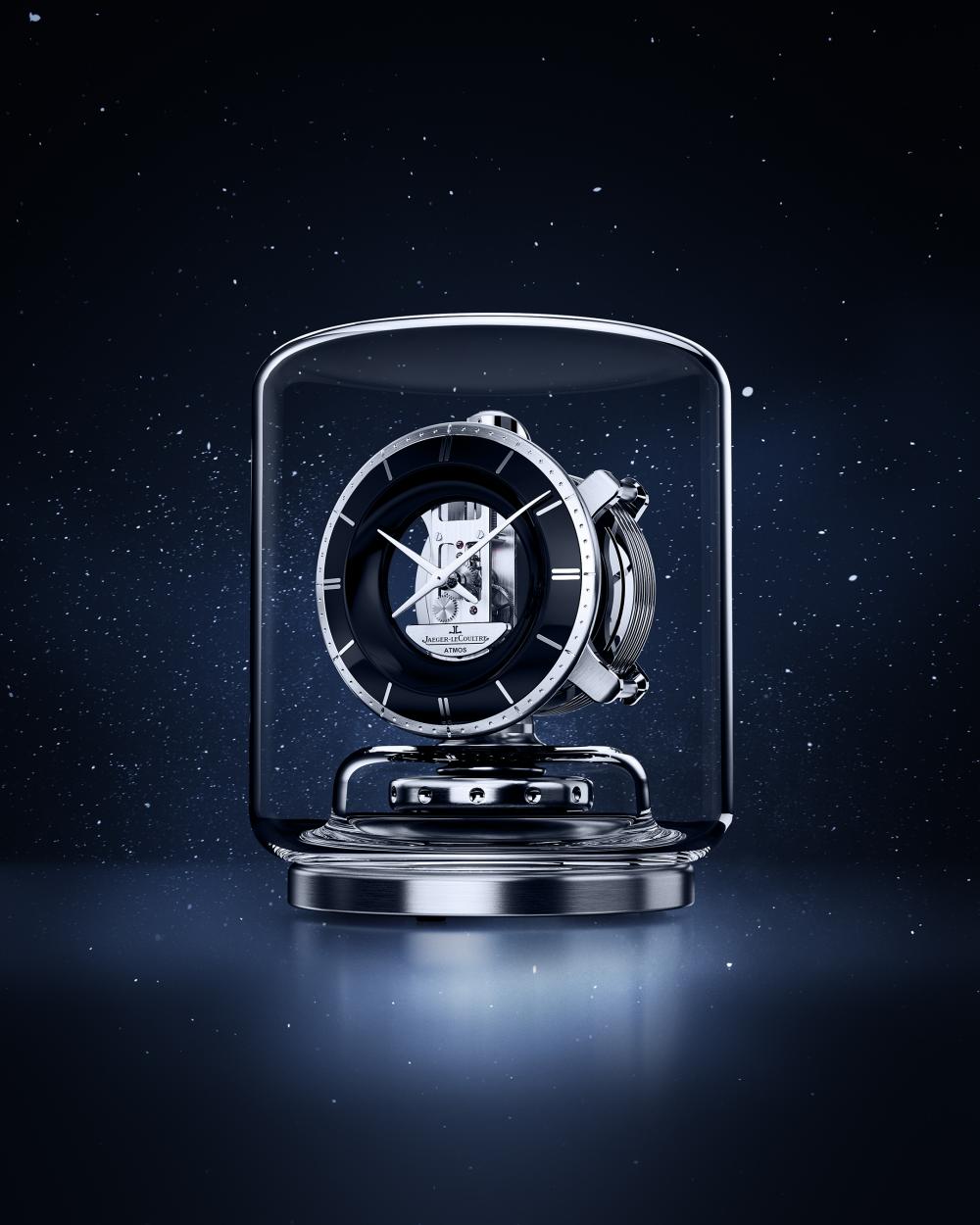 The company has been based there since 1833 when Antoine LeCoultre transformed his family's small barn into an atelier. In 1903, a meeting between Frenchman Edmond Jaeger and Jacques-David LeCoultre led to a partnership and the renaming of the brand as Jaeger-LeCoultre.

The Haute Horlogerie also emphasises the preservation of crafts at the Métiers Rare atelier, whose artisans decorated the Atmos Hybris Mechanica Calibre 590, with a miniature painting, inlaid meteorite, engraving and lacquer. The glass cabinet has also been hand-painted with a delicate rendering of the constellations.

Enamelling has been taken to a larger scale for the Atmos Régulateur Cherry Blossom, exhibited at Homo Faber.

The transparent glass cabinet showcasing the clock's mechanism is set between two dramatic panels of black Grand Feu enamel. The size of the panels, measuring 196mm by 105.2mm, presented an entirely different set of challenges. Materials and techniques were examined and reconsidered as well as a larger kiln. 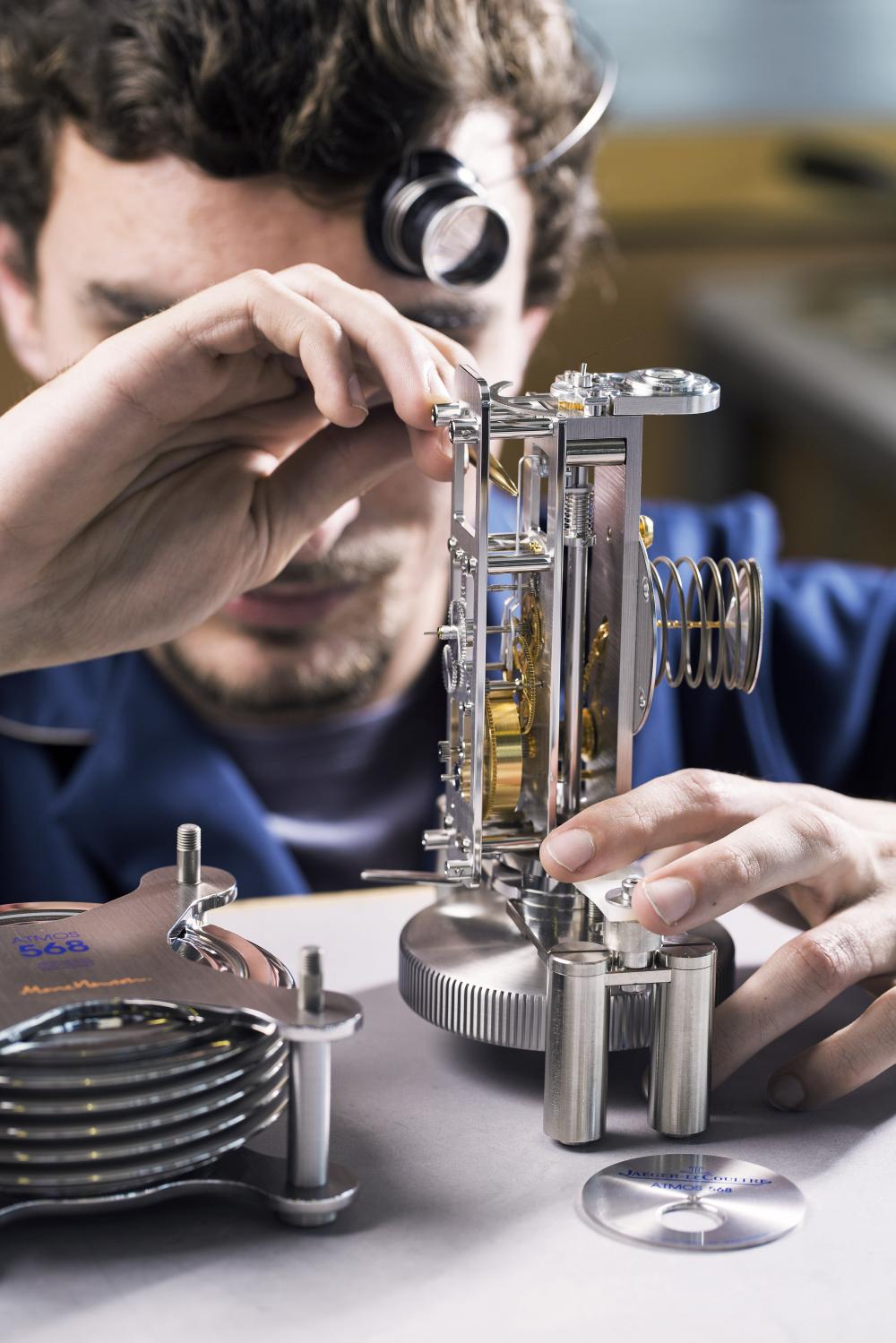 The dry enamelling technique of sifting powdered pigment onto the copper plates was repeated, again and again, to achieve the desired depth and uniformity of the black colour. After every layer, the panels had to be fired, then cooled and flattened -- with every stage carrying the risk of bubbling, cracking or dust specks, any of which would ruin the work.

Finally, when the black enamel backgrounds were completed to perfection, the miniature painter worked on the birds, scattering petals and branches of cherry blossom that extend seamlessly from one side, across the dial ring, to the opposite panel.

The unique piece is powered by Jaeger-LeCoultre Calibre 582, distinguished by its regulator display. With an architecture defined by circles within circles, the large minute rings and smaller hours rings are complemented by a monthly calendar and moon-phase display, as well as by the shape of the annular balance that slowly oscillates beneath the displays.

Other works of art include Atmos du Millénaire Atlantis created to celebrate the new millennium, Atmos 566 by Marc Newson encased in a cube of hand-made Baccarat crystal, and Atmos Marqueterie Le Baiser enclosed in a cabinet of rare woods with an exquisitely detailed marquetry rendition of Gustav Klimt's painting The Kiss. 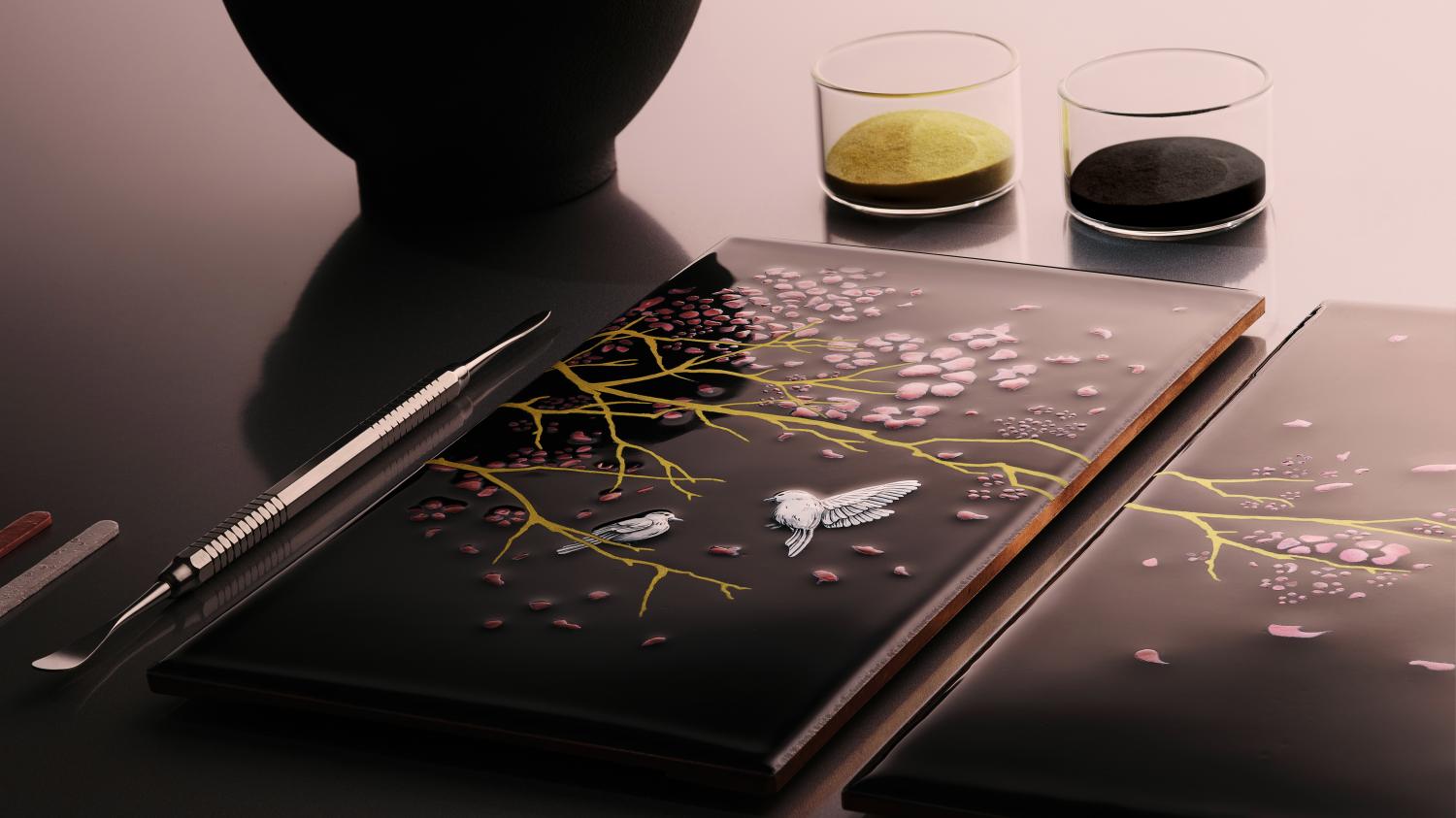 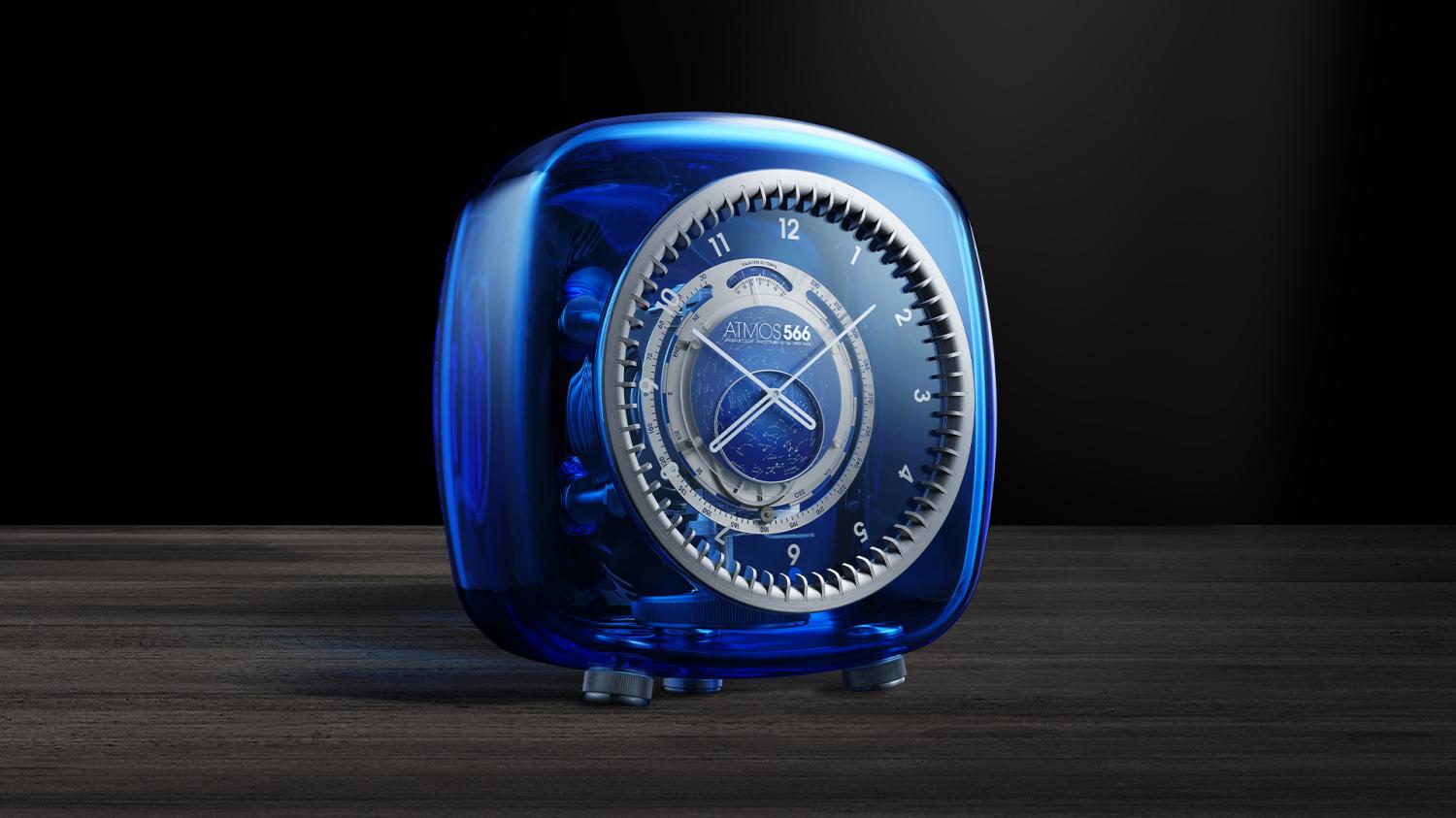