There is very little Gerry Rasmus will not do to make this world a better place. Pattaya's beaches have not been quite the same since his arrival 13 years ago. 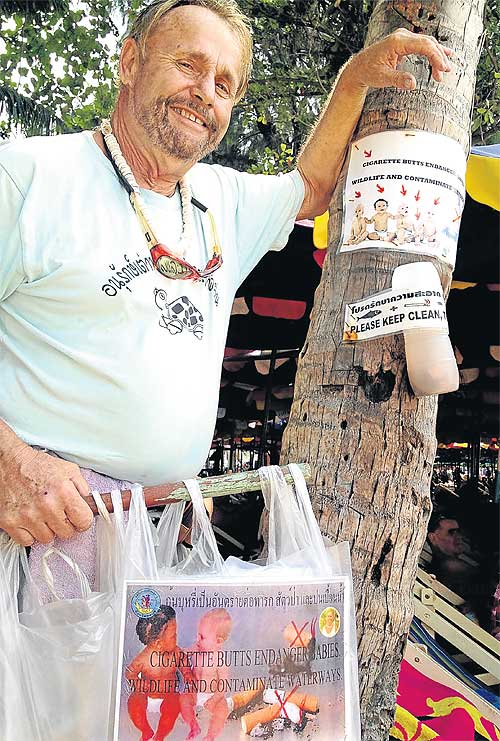 Gerry Rasmus takes it upon himself to set a good example to others by collecting rubbish on the beach.

His passion for giving has enabled the retired American expat to garner a string of social accomplishments, some of which include working with the homeless, feeding strays and clearing litter on beaches such as Jomtien, which the 76-year-old is probably best recognised for.

For his dedication, Rasmus has been presented with a number of awards, three of the most memorable being Pattaya's Expat Greatest Contributor 2013 (by Central Department Group), an award from Pattaya City Hall for protecting the Gulf of Thailand and an award for Waste Management and Recycle, Chon Buri province. All six awards have been priceless for him. Back in 2007, when the Chon Buri governor acknowledged his efforts to clean up Jomtien beach, he knew he was on the right path.

"Thailand needs education to equip locals with the know-how to keep the natural environment around them clean,'' said the retired expat. "We need to teach the unknowing, explain to the uncaring and [when needed] impose fines, community service, jail time for anyone who destroys nature."

The old timer decided to lay down roots in the Kingdom because he found the locals to be down-to-Earth. "Thais seem to be born survivors, they tend to make most out of the least," he said.

Rasmus, who spent most of his life in Hawaii before deciding to retire in Thailand, has always believed in being a good example when it comes to addressing pollution problems. His goal is to always leave a place looking better, safer and cleaner. The American said that to get to this stage in life he had to go through a spiritual awakening, during which he questioned his existence. During this time of soul searching, he came to the realisation that while he was discovering himself, he would keep his surroundings clean, safer for children and wildlife, making it more pleasurable to the eyes for everyone.

One of the many reasons he became aware of litter and its dangerous effects was due to an incident that occurred some 40 years ago in California. "I heard a mother scream, her one-and-a-half-year-old daughter was choking. So, I picked her up, turned her upside down, patted her back, but she continued to choke. I then reached into her mouth and was able to remove a toxic cigarette butt. From that day on, I quit leaving behind my toxic cigarette butts. I told every smoker what happened, explaining the dangers of 'toxic butts', which can take up to 12 years to decompose," he said.

Rasmus' socially-conscious side makes him sensitive towards the needs of humans and animals alike. Random acts of daily kindness are priceless and both the giver and receiver are rewarded, he said. ''I'll be 77 in April, I'm not looking to retire," he said.

"I'm here to help and get my physical exercise simultaneously. The rewards of helping others is priceless, it keeps me going. The wonderful people that reach out to support my work, to be able to reach out to others, keep the wind in my sails, a smile on my face and power to keep on going.''

Being a good Samaritan is also part and parcel of his nature, so whenever an opportunity arises he lends a helping hand to people that require everything from first-aid to drinking water, food and also clean clothes. He also readily gives a hug, handshake or smile when necessary. He has also come to the realisation that nobody can force people with problems to seek help. "While one can open all kinds of doors for people with problems, unless they want to walk in, there is nothing anyone can do. I was stuck with a sick person for over 40 years, me, so I know what that feels," said Rasmus.

"I lived a life of vices now for number of years, but have now turned a new leaf. What helped me most through this process was the need to forgive myself and others. I also had to learn to love myself unconditionally. Giving back to Mother Earth in every way possible and counting my blessings daily had become my mantra as I battled a string of illnesses. Thanks to the powers above, I have lived beyond the time doctors gave me. Today, I understand the most important things in life are good health and inner happiness, which can be achieved through a good diet and proper exercise. It is important to give back to society and count one's blessings. Having respect for oneself and others, being fully responsible for ones actions are a few aspects worth practising."

If there is anything Rasmus would like to leave behind as parting advice, it is to "be wise with your interactions with locals".

Saying no to illegal wild meat