Finding the right van to your destination from Victory Monument — home to the biggest fleet of commuter vans in the country — used to be no easy task. There are more than 170 routes offered by the hundreds of vans sitting at seven different service points at the roundabout, but there is zero signage. Frequent commuters may have mastered their ways around the slipshod management, but first-timers often end up going round in circles and foreign tourists simply lost in translation.

A group of students from King Mongkut's University of Technology Thonburi, have therefore stepped in to improve the situation. Since May 19, a number of glossy, user-friendly maps and signs for services have been put on display across the area, as well as distributed for download on social media.

The work was developed by a group of six fourth-year students majoring in graphic design and visual effects as part of their final project called "Thai Vans". The maps and signs systematically separate each service point with different colours as well as illustrate destinations that vans from a particular area travel to, with details in both Thai and English.

Poom Sukhanthaphan, the 22-year-old leader, and only male of the group, came up with the idea of working on this project because he had first-hand experience in dealing with the difficulty in finding a van to go home from Victory Monument during high school.

"We wanted to choose one problem to play with and it all came down to the van problem." Poom said. "We thought we could use this chance to do something that the country would benefit from."

The team kicked off their project last March by going out in the field eight times to collect information and give out questionnaires to learn about the daily problems faced by passengers.

Poom said that the data put into the maps and signs was last updated on March 19, which he rates 90% in terms of accuracy. What is missing is information concerning places where each van stops along the way.

After over a year, the project was completed. At first, the students were only permitted by Bangkok Metropolitan Administration to set up displays of maps and signs, funded by the university, to collect feedback for a week. However, seeing that the maps and signs were useful for the public, their university later asked BMA to consider allowing them to have the stand permanently. The BMA, of course, accepted the offer.

The handover ceremony took place on June 2 at Bangkok Art and Culture Centre where the team went to showcase their work along with other students from the same university. The maps carry a "semi-permanent" status, which, according to Poom, is because they will be used until BMA remakes them with stronger material.

Soon after the work of the students was noticed, it quickly gained attention from the media. While the acclaim has surely been a rewarding experience for the young creators of their year-long school project, what makes Poom and his teammates even happier is seeing people find their work helpful.

"A foreigner told me that he had trouble finding the van the last time he came to Thailand at Victory Monument. But he told me that this time he knew immediately where to find the van after looking at the map." Poom added. "Security guards and BTS staff also said that it helps them a lot. They told me that because of the maps and signs, fewer people have come to ask them about directions." 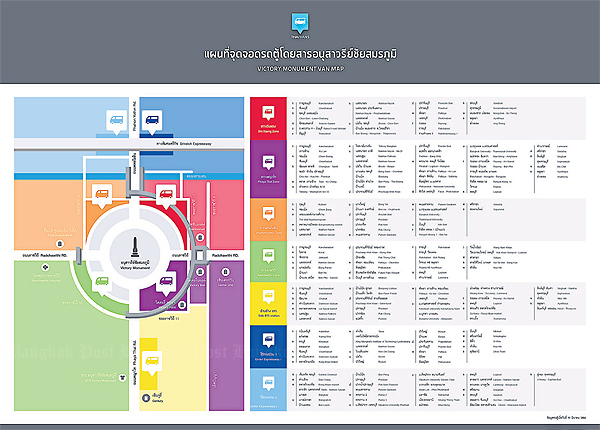 A print-out of the Thai Vans map.

Apart from the maps and signs, the team also created infographic posters, which have been posted on social media, as well as mobile applications. Although for the final project, the application was only a mock-up design, it is now being developed with help from the university and is set to be released on Android and IOS in the next few months.

The students are now graduating and as what they created is now at BMA's disposal, they have come much further than expected. However, they would love to see their school project being pushed forward as far as possible.

"We didn't think our school project would become this successful with lots of good feedback and moral support," Poom said. "We will regret it if it doesn't get developed in the future."

"Travelling is an everyday thing," Poom said. "Nobody in this world does not have to travel."