Cleaning up the accolades

Locals and tourists alike have made the 'Trash Hero' campaign on Koh Lipe a great success, with copycat initiatives spreading throughout Thailand and even Indonesia

Every Monday is a special day on Koh Lipe, a sandy, breathtaking and increasingly touristy Andaman island off Satun province. It's the day when everyone, locals or visitors, can call themselves a hero.

Since December 2013, Monday has been designated as the day of the "Trash Hero", when a big clean-up of Koh Lipe, including other small islets in Moo Koh Adang Rawi in Tarutao National Marine Park, takes place with the participation of locals and tourists. Fifteen months after the campaign began, it is estimated over 50 tonnes of garbage have been removed. "Trash Hero" won The Thailand Green Excellence Awards UK in November 2014. The campaign has gradually become an inspiration for other tourist spots in Thailand, and even Indonesia.

"Anyone can be a 'Trash Hero'. There is no cost, no sign-up. All you need to do is just show up," said Jirawat Somboon, one of the campaign organisers.

Anyone who steps foot on Koh Lipe can feel the enthusiasm. On the ferry which runs from the mainland, or in some restaurants and hotels, there are leaflets inviting visitors to join the Monday trash collecting event. Come the day, there is a community spirit where everyone — Thai and foreign — lends a hand. The initiative coincides with increasing concern about the growing number of tourists flocking to the island. Since the idea originally came from locals, it can serve as a model for sustainable community tourism.

Originally from nearby Songkhla province, Jirawat ran a bar in Koh Lipe for over a decade. Working in the tourism business, he has witnessed the beautiful islands of the Andaman, such as Phi Phi, being turned into an eyesore and threatened by a lack of proper garbage management. The future of tourism in Thailand, he believes, largely depends on one thing: the state of the environment. So when Roman Peter, a Swiss visitor, talked to his Thai friend Nirut Chochuang about setting up the project, Jirawat jumped at the chance.

In the early days, there were only a few participants — pioneers Peter, Nirut, Jirawat and Darius Vikili, another Swiss guy who's married to a Thai lady and ran a beach cafe for over a decade. But word got around, and from that humble start, now Trash Hero mobilises over 2,000 volunteers from about 20 countries almost every Monday during peak season. After seeing the commitment of the team, hotels and restaurants on the island helped sponsor the campaign by providing long tail boats, drinking water, food and related facilities. 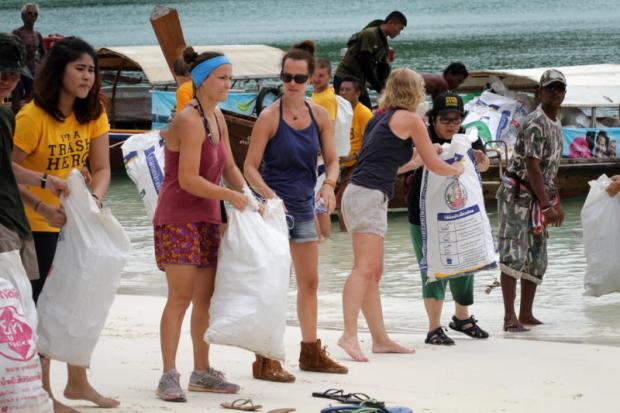 "The Monday clean-up campaign is seriously obeyed by everyone. But even if there are only two people who turn up, the show must go on," said Jirawat.

Except when the weather turns really bad, anyone who wants to be a Trash Hero can meet at 10am on Monday at Pattaya Beach. When we visited the place recently, a small group of visitors were waiting at the meeting point. Most of these volunteers were tourists who had joined the campaign for the first time. Soon, long tail boats arrived to pick them up and carry them past dots of splendid small islands in Tarutao National Marine Park. The boats stopped at the stunning Ao Luek Bay in Koh Rawi, a small island near Lipe (on other Mondays, the boats go to other bays, coves and beaches for the clean-up).

At first glance, the quiet Ao Luek Bay is idyllic. But locals know that the serene cove, as designed by nature, is actually a site where rubbish washes up. Every day, the waves carry a large amount of garbage to this particular beach, and it has got worse since the tsunami in 2004. As of last May, volunteers have collected from this beach 80,000 flip-flops, 61,500 plastic bottles, 16,000 plastic lighters, 18,800 glass bottles, 200 cubic metres of styrofoam and 3 tonnes of non-recyclable waste. This trash is truly international: 60% is washed up from Malaysia, India and Myanmar. 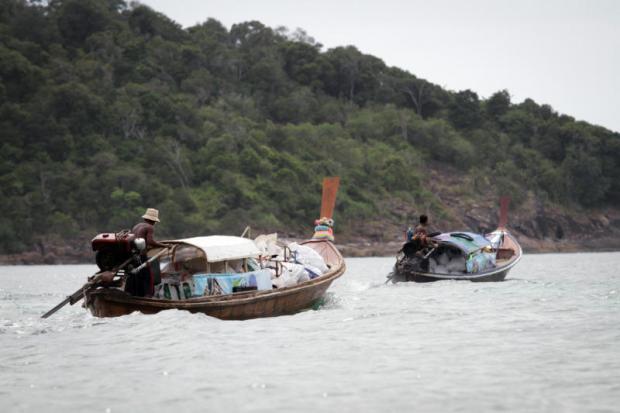 Garbage is hauled back to the mainland and sent for recycling.

Most reusable trash is recycled. For example, 80,000 flips-flops in May were sent to the rubber-recycling project at Prince Songkhla University in Pattani. Plastic lighters were sent to an artist on Koh Lanta in Krabi, where they were turned into lamps and art objects. Bottles were sold to recycling factories. Non-recyclable trash is sent to a municipal waste disposal site.

Roman Peter, who initiated the campaign, never runs out of ideas to keep the enthusiasm high. An eye-catching logo, with yellow in the background, is seen everywhere on the island. The team realises that the best way to reduce waste is not to clean up after it, but to avoid producing garbage in the first place. Thus the team produces and sells biodegradable water bottles with the Trash Hero logo. Peter plans to introduce bamboo cups on Koh Lipe too.

Collecting rubbish is not an easy task, but Trash Hero organisers try to make the activity casual and fun. Volunteers work for a few hours, and afterwards swim in the sea and enjoy a free lunch.

Peter attributes the popularity of the campaign to the attitude of the team's members.

"Rain or shine, every Monday, people will see us go out there, picking up garbage," he said.

"Another aspect is the strict financial transparency. Trash Hero does not solicit donations in advance. Staff always bring receipts to show sponsors, and always post expenses on social media." 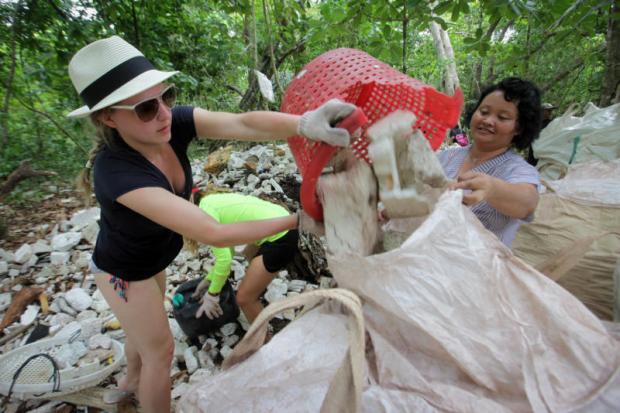 Last December, the campaign introduced a new activity called "Trash Hero Camp". Volunteers are required to camp on Koh Rawi for a minimum of two nights, up to two weeks. During the day, they walk across a mountain to Ao Luek Bay to clean up garbage. At night they sleep in tents, hammocks and abandoned diving decompression chambers left on the beach.

"After I first walked across the mountain, I saw another mountain of garbage," said Jennifer Hobbs from Oregon, in the US, who stayed for two weeks. "My first impulse was to start picking up rubbish and put it in bags. But after a while, I realised that there was too much. We know we will not be able to do away with it. After all, garbage always come back from somewhere."

As long as that happens, the clean-up will have to go on — everywhere. The idea of Trash Hero has been picked up by other tourist spots in Thailand.

Trash Hero in Hua Hin already has its weekly garbage day. Local activists and business operators in Koh Samui, Koh Tao, Koh Lanta and Koh Phi Phi have also begun similar projects. It's not just the seaside towns that see the benefit. There are Trash Hero activities in Chiang Mai province and even in Indonesia.

Garbage will be with us as long as there is consumption. Volunteers at Lipe or Hua Hin can deal with limited areas. But the rubbish problem has no boundaries.

"Here I camp out in a small beach in a corner of the world," she said. "But when you throw away garbage, wherever you are, it will always end up somewhere." 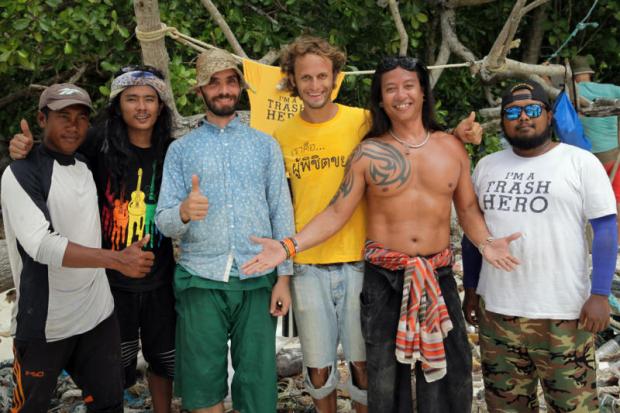