The rocky road to development

7,938 signatures have been collected by the Friends Of The River group to oppose the PM's plan to change the face and life of the Chao Phraya

published : 2 Sep 2015 at 03:47
newspaper section: Life
writer: Anchalee Kongrut
This graphic by FOR shows an alternative way of building a bicycle lane along the Chao Phraya River.

One Prime Minister Prayut Chan-o-cha's many ideas is the "New Bangkok Landmark", in the form of a 14km-long bicycle way that would, if launched, be built along the Chao Phraya. This caused some panic attacks among local architects. After the idea was thrown around earlier in the year, prominent Thai architects voiced their disagreement and suggested that at least the design -- an expressway-like structure built into the water along the river bank -- be revised, if not abandoned altogether. The cost of the project is said to be around 14 billion baht.

The opposition gained momentum in February when esteemed architect and National Artist Sumeth Jumsai wrote an open letter to Prayut, asking him to reconsider. Known as an expert on river-based Thai architecture, Sumeth also submitted his ideas for an alternative design that would envision a floating promenade instead of the concrete structure. The architect was most concerned about the fact that the hard concrete suggested in the initial plan would block the view of Bangkok's cultural heritage and furthermore obstruct the local way of life of riverside communities.

After the cabinet approved the project in May 12, a number of landscape architects joined hands with civic groups, mainly the urban conservation group Big Trees, to form a network called Friends of the River (FOR). The group organised a boat trip bringing reporters to inspect the river. Almost every Saturday for two months, the group hosted a public forum at various venues, such as Thammasat University and the JAM Factory on Charoen Nakhon Road. Recently, Siriraj Hospital and the Bank of Thailand -- both situated by the river -- also sent representatives to join the forum.

Last month, FOR also launched a design competition to encourage student architects to conduct survey trips along the river, gather information on the historical, economic and cultural aspects of life along the river and draft new designs that would possibly respond better to the cultural diversity that sits along Thailand's main river. Those designs will be displayed at the Bangkok Design Festival in October at the Bangkok Art and Cultural Centre (BACC).

Yossapon Boonsom, FOR co-founder, said the design competition is just a necessary process that seeks to raise awareness and groom the next generation of architects to be more sensitive to urban landscapes and spaces.

"It is not that we are against the development. But if the government wants to develop the space along the river, it should come up with a master plan and a new design competition," he said. "The project must at least conduct a public hearing.

"When we formed this group, we wanted the project to be cancelled and we wanted the public to be aware of the necessity for public participation. Architecture is not only about drafting ideas. In it, design is also about involvement and listening to others and allowing users a chance to participate."

FOR is gathering signatures at www.change.org and asking the government to cancel the project. So far, the campaign has gathered around 7,938 signatures.

The 14km bike lane is part of a bigger project: 50km of roads for cars running along the two banks of the Chao Phraya. The model it will mirror is said to be the riverbank roads of Seoul, South Korea.

Prapan Napawongdee, another co-founder of FOR, said it is the professional duty of architects to inform the society about designs that will have wide social repercussions.

"We are trying to tell the public that this project is not just a bicycle lane. It is major urban development that needs time to be studied and greater public participation," he said. "The government needs to consult the public -- and public in this sense is not just a few communities along the river."

In fact, this is not a novel idea that has just been launched by our current government. The blueprint of the riverside road was originally drafted by civil-engineers in 1993 under the watch of former transport minister Gen Vinai Sompong.

The plan was to build a six-lane traffic road along the river. As a member of the Democrat party, Vinai was famous for cooking up traffic projects, such as that of the western and eastern ring-road. He was also involved at some point in the Hopewell Project. He believed that the riverside expressway would relieve the capital's traffic congestion.

The junta dusted off the project this year. Of the entire 50km blueprint, the first phase plan is a 14km bicycle route and tourists promenade that will run from Rama VII Bridge to Pinklao Bridge. The next phase will go further down to Rama III Bridge, passing the clusters of cultural heritage sites and the traditional communities on Rattanakosin Island. If the junta pulls this one off, the project may well make the Guinness Book of World Records as the widest bicycle lane in the world -- a 12m bicycle lane, equivalent to that of a four-lanes road, on each side (the renovated bicycle park at Suvarnabhumi Airport will be only 4.8m in width).

Landscape architect Assoc Prof Ariya Arunin of Chulalongkorn University said the project is definitely not just a bicycle route, but part of a huge flood embankment along 140km of the river proposed by Yingluck Shinawatra's government.

"It is definitely not just for bicycles, its structure will also be used for retaining floods and that is why it costs so much.

"Its pillars are the same as those used to build an expressway. There will be a 2.8m-high wall. The beautiful view of the Chao Phraya River will be blocked. Residents along the river will no longer be able to access the river. They will see a high wall instead," she said.

As architects express their shock at the original design that is so devoid of any semblance of aesthetic touch, conservationists and hydrologists also dread some other side effects. Saranarat Kanjanavanit, secretary-general of Green World Foundation, warned that the 12m-wide platform will worsen the already poor water quality of the river, as it will prevent the photosynthesis and oxygen necessary for water to regenerate and purify itself.

The 400 pillars will trap garbage and become a new nursery of water hyacinths. Meanwhile, George van der Meulen, the acclaimed Dutch expert on water management who has advised Thai authorities on water management for three decades, warned that the concrete structure would change the hydrological flow of the river, for the worse.

Though the proposed bike route and new roads would increase traffic mobility and enhance the city's connectivity, observers warn that rushing things too fast is not beneficial for every party. As of June, the government announced that the construction would continue, though the schedule has been postponed from January 2016 to June 2016.

Assoc Prof Thittiphan Titrakarn, lecturer on landscape architecture at the King Mongkul Institute of technology at Lat Krabang campus, said that the project should be scrapped once and for all and that it is better for architects to leave the river as it is.

"Leave the Chao Phraya River alone. This river is not just any river course, it is filled with our cultural heritage, national identity and is of high value, socially, economically and ecologically.

"If the landscape is changed and deformed, no smart design nor brilliant architect could bring its cultural scene and the traditional way of life back."

The project was conceived by former transport minister Vinai Sompong. Famous for his traffic-solving projects, Mr Vinal always dreamed of building a six-lane high way along both sides of the Chao Phraya River. The project was protested and shelved.

The road and embankment along the Chao Phraya River was revived and included as part of the 120 billion baht water management plan under Yingluck Shinawatra's government to prevent flooding.

PM Prayut Chan-o-cha floated the idea to build a bicycle lane and promenade route along the Chao Phraya River.

The cabinet approved the project and its cost of 14 billion baht.

Bangkok Metropolitan Administration opened the bidding to find a consultant firm that would conduct a feasibility study. The feasibility study will be finished by January next year. The cost of the study is 126 million baht.

Deputy PM Prawit Wongsuwan announced that construction will continue. However, the timeline has been postponed from January 2016 to June 2016. 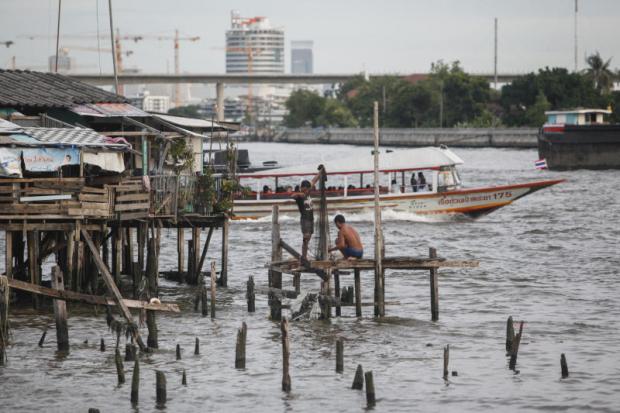 The Chao Phraya River is home to many traditional communities and ways of life reminiscent of Thailand's past. 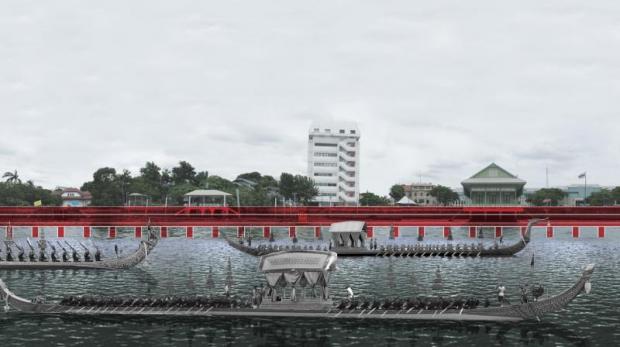 A rendition by FOR showing how the government's plans will obstruct views of the Chao Phraya. 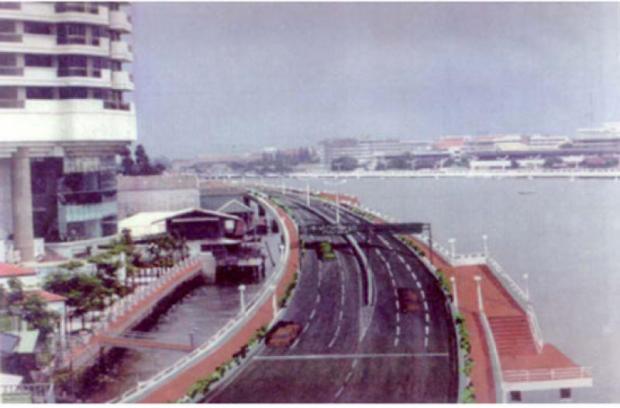 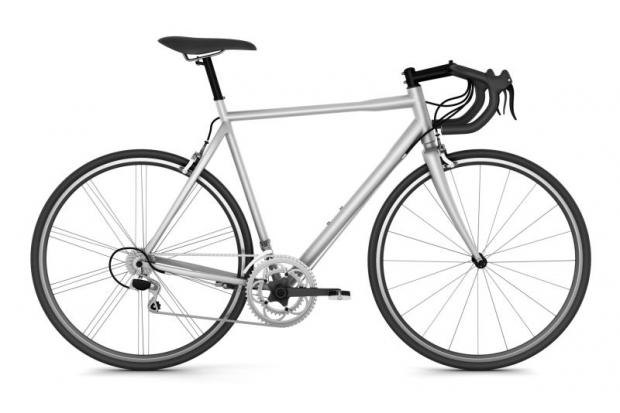