Police commandos guide arrested monks into a van. A poll released Sunday by Siam University stated that 79.37% of respondents stated that the recent corruption scandals have failed to shake their faith. (Post Today photo)

The police force's Counter Corruption Division (CCD) has launched a fourth round of temple fund embezzlement probes with 30 temples already suspected of involvement in the alleged wrongdoing.

CCD chief Pol Maj Gen Kamol Rienracha said the latest round of investigations involve the allocation of grant-in-aid for temples provided by the National Office of Buddhism (NOB) between 2011-2016.

While he confirmed that the latest probes implicated state officials and monks, he did not specify exactly how many temples and individuals were involved.

For cases involving state officials, the CCD will forward them to the National Anti-Corruption Commission for further action, Pol Maj Gen Kamol said.

A CCD source said that the latest round of probes initially targeted about 60 temples in 13 provinces in the Central Plains region, the East, the North and the Northeast.

The CCD has so far finished probing 40 of the temples. Of these 30 were suspected of involvement in the alleged embezzlement of temple funds with losses estimated at more than 102 million baht, the source said.

At Wat Sa Ket, they arrested three assistant abbots while abbot Phra Phrom Sitthi, who was on the arrest warrant, could not be found.

At Wat Sam Phraya, they took abbot Phra Phrom Dilok and his secretary Phra Atthakit Sophon into custody. At Wat Samphanthawong in Yaowarat area, they could not locate assistant abbot Phra Phrom Methee who was also wanted on an arrest warrant.

At the same time, another team of police raided Wat Or Noi in Nakhon Pathom's Kamphaeng Saen district where they arrested the abbot, the defrocked Phra Buddha Isara, now known by his lay name, Suwit Thongprasert, .

The former Phra Buddha Isara was charged with robbery, running an illegal secret society and using royal initials without permission when he cast a batch of amulets in 2011.

Kosol Saisuwan, a lawyer for the defrocked Phra Phrom Dilok, said his legal team was studying if an arrest warrant issued for his client was in line with the law.

If not, they will ask the court to revoke the warrant, Mr Kosol said. He said the former Phra Phrom Dilok held a governing post in the clergy and was deemed a state official.

Therefore, it should have been left to the NACC to decide first if there were grounds to the allegations against the former monk, Mr Kosol said.

In a related matter, political activist Srisuwan Janya said he will file a petition Monday over the amount of "excessive force" by police in the arrest of Suwit Thongprasert, the former Phra Buddha Isara, in the raid on Wat Or Noi.

In photo below, women in traditional attire stir the makings of khao thip rice dessert in large woks at Bangkok's Wat Pichaya Yatikaram. The dish is believed to be associated with the Lord Buddha's enlightenment as Buddhists around the world prepare to celebrate Visakha Bucha or Vesak Day on Tuesday. (Photo by Chanat Katanyu) 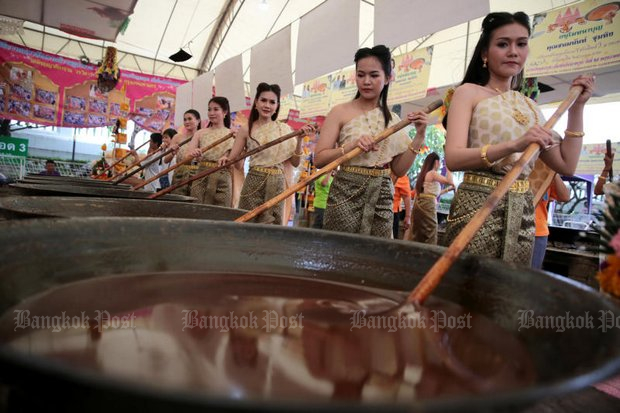