For his 18th novel, Silhouette Of Desire, Uthis Haemamool has assembled a collection of thematically related paintings

"I wrote about sex and about death. It's a tough pairing, especially when there are some real deaths involved," says Uthis, goateed and gelled, in Steampunk shades and faded jeans. "There's also the literary risk, because I want to use an honest, direct vocabulary to describe sex. I don't want to censor myself. Now we'll see if the readers can take it."

Uthis, now 42, won fame and a following when his novel Lablae Kaeng Khoi (The Brotherhood Of Kaeng Khoi) won the prestigious SEA Write Award in 2009. It was a generation-spanning family drama that begins during World War II and ends in the 1990s. But like many Thai artists, the former art student, film critic and now full-time novelist has increasingly been taken over by the heat of politics and the struggle to comprehend a social landscape where ideology, absurdity and uncertainty shape a person's experience.

Silhouette Of Desire follows an art student at Silpakorn University -- like the writer himself -- as he comes of age sexually and politically, and lives to witness contemporary Thai history marked by Black May in 1992, the 2006 and 2014 coups, and last year's death of King Rama IX.

At Artist+Run Gallery on Narathiwas 22, where his exhibition is being shown, Uthis sits backgrounded by contorted figures in coitus. As an art student, human anatomy fascinated him. As a writer, he has found a medium that takes him farther than paints and brushes. Uthis has a boyish enthusiasm when he speaks, and he's completely honest when recalling the process of creating the multi-platform Silhouette Of Desire.

He also notices how the human body resembles the Thai alphabet, with the curves, the crooks, the contours. For the novel, Uthis asked a graphic designer to design a new font, called Pratana (Desire), that imitates various sexual positions. Several passages in the novel are printed in the new font, and the original sketches are on show at the exhibition.

Art, politics and dissension have been with him from the start. When he was an art student at Silpakorn, Uthis and some of his friends were known as renegades who openly defied what they perceive as the traditional mindset of his institution. As much as Silapkorn University is revered, Uthis says some students question the school's conservative roots and its practice of training fine craftsmen with impeccable techniques, instead of nurturing artists with bold ideas. Two decades after graduation, he looked back and laughed at the moment when he would stride into the university gallery to make loud, snide remarks at the artworks of his faculty members, intending for everyone in the room to hear.

"There are only a few fixed sets of ideas you're told to follow, and they're based on morality and tradition -- an inherited artistic legacy formed a long time ago," he says. "I believe there should be other ideas and other paths towards being an artist too." The professors were displeased, and yet he graduated without too many glitches. Uthis soon felt that visual art couldn't quite fulfil his creative impulses and he turned to cinema, helping organise screenings of European art-house films in connection with the group Film Virus, and later worked as a film critic and as an art director on a movie. He started writing scripts, but again, the film industry was strewn with its own rules and prejudices. Uthis found that the stories he wrote could be turned into short stories and novels -- and he set out on the path he's been pursuing ever since.

His first novel, Rabam Metun, came out in 2004, followed by a short-story collection, before Lablae Kaeng Khoi won him the SEA Write, probably the most respected literary prize in this part of the world. Silhouette Of Desire is his 18th book.

"When I try a new artistic medium, I want to explore how it serves my vision most efficiently," he says. "I became interested in film because, say, a shot of a person's face in a Krzysztof Kieslowski movie tells me about many deeper feelings than a painting does. And when I turned to writing, it's because literature can give clarity and form to my thoughts. It responds to the ideas I have in my head."

The nakedness of Silhouette Of Desire -- both the novel and the series paintings -- is something integral to the grand design of the project, he said.

"To go naked is the best armour. What I try to do is take the readers on an investigation of the way a person is shaped by various conditions in society. It's like watching a performance in which a character slowly takes off his clothes to reveal what's inside."

It's obvious that, like many mid-career artists, filmmakers and writers, Uthis has lived through three coups, several more prime ministers and testy protests, and politics inevitably lodges itself in his creative consciousness.

"We heard a lot of Oct 14, 1973, and Oct 6, 1976, but those were stories from the past," he says. "But what's happening now is also history. We used to think politics was separated from our lives, but it's become so clear that it's not. Politics and life have always been the same story. It's in our emotions, in our breath. We're looking history in the eye right now."

"Silhouette Of Desire" is on view at Artist+Run Gallery, Narathiwas 22, until Sept 30. The novel, in Thai, is available at most bookstores. Uthis Haemamool's Lablae Kaeng Khoi is also available in English. 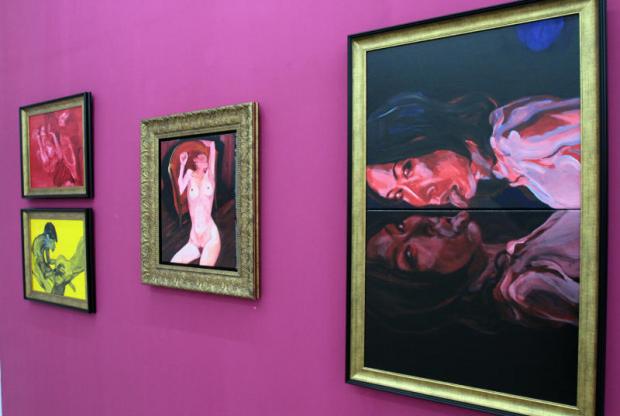 JM Coetzee, including Disgrace and other novels. "He writes with cold detachment, but it touches you deeply. He writes with a form that I wish I could write in. Orhan Pamuk is popular among Thai readers now. I prefer his earlier books to his later ones, though."

Krzysztof Kieslowski, the Polish filmmaker of Dekalog, The Double Life Of Veronique, and others. "The power of his film language makes me want to become a storyteller, to tell about the fragmentation of life."