Cambodian Space Project's Srey Thy was taken young in a car crash, but her legacy will be a lasting one

The news last week that the lead singer of the Cambodian Space Project, Kak Channthy, had died in a car crash in Phnom Penh has shocked her fans in Cambodia and across the globe. She was 38 years old. 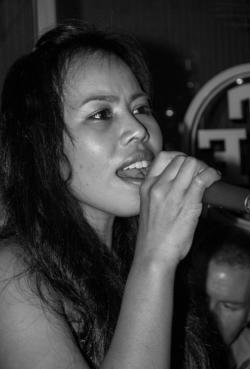 Channthy, better known as Srey Thy, had developed an international reputation as the lead singer of the Cambodian Space Project, formed in 2009. The band initially developed their 60s-influenced sound with covers of Cambodian pop and rock'n'roll hits from the Golden Era of Cambodian popular music, when Sinn Sisamouth and pop divas Ros Serey Sothea and Pan Ron ruled the clubs and airwaves.

Channthy told me during the band's brief tour of Bangkok in 2010 that her idol was Pan Ron, and you can hear the influence of the great singer on the band's first release, the Maxi single/EP I'm Unsatisfied (2010), which became the first vinyl release in Cambodia since 1975.

The singer did not start out life as a musician but rather came from rural poverty, and in the province she was born in, Prey Veng, she had worked various jobs, from rice farmer to rubber-plantation worker. She moved to Phnom Penh as a teenager, labouring and even working as a cleaner. Eventually, her love of singing and obvious talent led her to make a breakthrough as a karaoke singer, earning the princely sum of US$2 a day.

It was at a karaoke beer garden that visiting Australian filmmaker, artist and musician Julien Poulson first saw Channthy sing. She did not speak English at the time -- though she learned quickly -- and Poulson had no Khmer language skills but somehow, perhaps through their shared love of music, they made a musical and romantic connection, and later they married.

It turned out that Khannthy's soaring voice and Poulson's psychedelic rock-guitar sound made for a perfect match. Cambodian Space Project brought back some of the much-loved hits of the 60s and early 70s, and in Thailand they would have been known as a nostalgia band, but the context of Cambodia's musical culture is very different from Thailand's. Whereas Thai music fans can enjoy various anniversaries of 60s bands like The Impossibles, that is simply not possible in Cambodia, as the murderous Khmer Rouge regime killed most of the country's musicians and pop stars, some of them after being tortured and humiliated.

No one else was doing what the Cambodian Space Project was doing. And maybe they could have stopped there and rested on their laurels. Instead they began to write their own songs, and it turned out that Channthy was a natural and very talented songwriter, despite having had a very basic education. She wrote directly from her experience, and this came out in funny (but moving) songs like Have Visa No Have Rice, which describes her response to finding herself in Paris and having to eat bread instead of rice.

The band released five studio albums: 2011: A Space Odyssey, Not Easy Rock & Roll, Whisky Cambodia, Electric Blue Boogaloo and Space-Out In Wonderland. Most recently, the band had been collaborating in a project to create new covers of hits by punk legend Iggy Pop. In 2015, a documentary feature film, The Cambodian Space Project: Not Easy Rock 'N' Roll, was shown at film festivals and on the UK's Channel 4.

This is a considerable legacy left behind by someone who came from poverty and hardship and lived a short life; she supported her two brothers and her 13-year-old son, Makara. That she would become an icon for young Cambodian women and inspiration for a new generation of singers and musicians is testament to her determination and talent.

Channthy was always fun to be around, and I found her a humble and very charming person with a terrific sense of fun. But above all, she was an original talent and a great singer. Rest in peace, Kak Channthy; you will be sorely missed by your fans and music lovers everywhere.