Through sculpture, video and sound installation, artist Phil America has transported a part of Klong Toey slum to Bangkok University Gallery. In his ''Villa In The Slums'' exhibition, the sculptural centrepiece is the actual shed which the artist had a local carpenter build in the slums and where America lived for two weeks before dismantling it and moving it to the exhibition space. 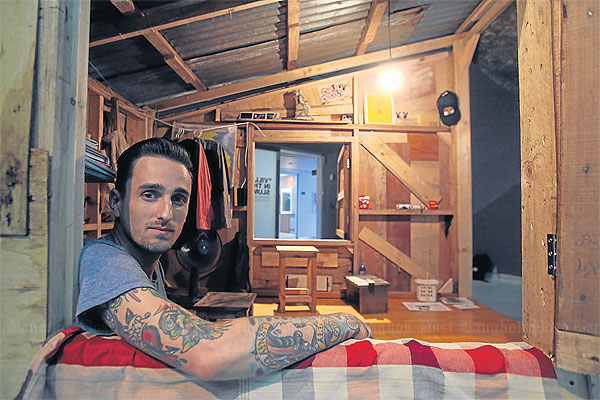 Phil America in the ‘slum villa’ he had built in Klong Toey.

When meeting up for an interview with Life recently, America requested specifically that it had to be late in the evening, and one has to really experience the work during such time to understand why. While the strip of skylight on the side in the exhibition room admits the actual near-dusk light from outside, the ceiling serves as the underside of an expressway, the spot where the shed used to be. And with the actual sounds of the surrounding environment he recorded during his stay in the slum playing, visitors can almost feel like they are really there.

The shed is simply built with a canvas flap serving as the door. There are only a few necessities inside, small chairs and shelves, a clothes rack in the corner and a sleeping mat on the floor. It seems perfectly livable when it's in an air-conditioned exhibition room, but it's probably another story when experienced with the stench of the khlong it originally stood by.

On the wall at the far end, a projector plays a video that America made during his brief slum sojourn. Apart from showing himself in various acts in a reality show-like manner _ brushing his teeth, a flash of butt during the shower scene _ the footage mainly shows the people in Klong Toey slum staring at the camera, somehow making it feel like there's unspoken dialogue between the two.

''You have the video which is showing the community and the people. You have the sounds, what it sounds like to be there. You have the house, the actual feel of what it would be like to be in the house on some small level and through that I think you reach somebody already,'' says America. Inside the shed there are postcard-sized acrylic paintings by Orawan Arunrak, a Thai artist who has helped America in many ways since the start of the project. Her paintings, which are hidden all over the place, depict expensive and dream-like pieces of furniture reflecting the aspirations of those in the impoverished community.

America says that it's very important to have the exhibition set up at Bangkok University Gallery _ also in Klong Toey _ because it's literally next door to the slum.

''You have the students coming here and not even know what's across the street, so to me it was pretty important to do it here at the university to have it relate more to people,'' he explains.

He says that his goal is to take viewers into a place they have never been to and give them a better understanding of the neighbourhood. The main subject is simply ''the way of life of a person from the slum''.

''As you know, a third of the urbanised world lives in slums and this is continually growing every day, more and more people are living in slum housing,'' he says. ''To me, the interest was there's this huge part of the world, even a huge part of central Bangkok, and nobody knows anything about it. I don't want to sound rude or offensive, but I think many people in Bangkok disassociate themselves from the slums of Klong Toey.''

''To me, the exhibition is about trying to bridge a gap between everybody else and the Klong Toey slum.''

America lived near the Queen Sirikit National Convention Centre for a while, and it was during that time that he started to get to know the people and the community there.

''It's quite close to Klong Toey market so I spent a lot of time there,'' explains America. ''And I made a photo series about the place. A lot of people have gone there in the day and taken photos. For me, when people do art or a photo series, for example, they research and they go but they don't actually get to know anything without spending time there.

''I wanted to actually live there, integrate myself there, get to know the people there, get a deeper sense of how these people live and then show it and try to, basically, bring more attention to the way these people live. So I figured the best way I could do that is build a house and live there.'' 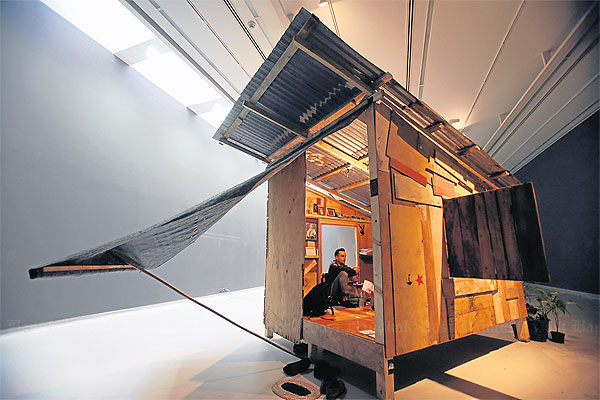 The exhibition sits underneath a Bangkok expressway, mimicking the spot where the dwelling originally stood.