One of the most sought-after and successful piano teachers in Thailand is Dr Nopanand Chanorathaikul. For years she has meticulously moulded many young talented pianists. She has been active in organising and offering her students great opportunities to perform in solo recitals and concertos. 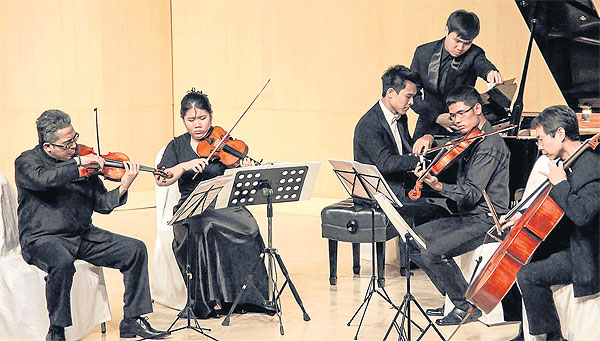 Recently, she has helped budding musicians discover and understand the intense beauty of chamber music, readying them to perform for audiences. With the support of the Stock Exchange of Thailand and Puriku Tea, the Chamber Music for Piano and Strings concert, held last month at Queen Sirikit National Convention Center, the teenage pianists was successful and well-attended, with the proceeds going to the purchase of a new grand piano for the New Grace Baptist Church’s sanctuary.

One highlight of the first half was Mendelssohn’s Piano Trio In D Minor, Op 49, which demands and challenges the skills of any player. Here, Piyaonn Musikabhumma impressed the hall with her very musical playing of the first movement. She maintained rhythmic drive and intensity, strong technical command and confidence.

Napat Sermwatana’s performance of the piece’s the second movement reminded the audience of the piano trio version of Mendelssohn’s Songs Without Words.

Summa Srivorapong portrayed a scherzo movement with a swift, light and crisp touch. Phumin Boonprapakorn ended the finale movement with great excitement, independent and colourful in his part, but always communicating with the strings.

In the concert’s second half, Dolpiti Kongviwatanakul took command in his piano part of Dvorák’s Piano Quintet, while together with the group he delivered the piquant rhythm of folk music, ending the piece firmly. Thaya Kongpakpaisarn has never disappointed his audience, and his performance of Brahms’ Piano Quintet was refined and bright. The strings’ rendition was very colourful, but many times the viola was overshadowed by others.

The extensive evening programme then concluded with Suvida Neramit-aram, who boisterously performed the Rondo Alla Zingarese movement of Brahms’ Piano Quartet In G Minor, Op 25. She dazzled and captivated her audience with a precise and daring rendition in an utterly fast tempo. Her unwavering dialogue with the string players was straightforward and sharp.

There is no doubt that the number of young, promising and talented pianists in Thailand has increased in the past decade. Many are listed in international-level piano circles. Will there be enough jobs, performance opportunities, venues and, especially, audiences to support them in the future? At least six of the students who performed in the evening concert have chosen to seriously study music and pursue a future career in the field.

Large portions of the applause went straight to their dedicated piano teacher, Nopanand, and of course, the performers’ devoted parents.