Over a year after its opening, Chulalongkorn Centenary Park is receiving more visitors as well as attention from names like the World Economic Forum, TED, The Guardian and Property Guru Asia. Built to commemorate the university's 100th anniversary by giving back to society, unlike other public parks the 28 rai plot of land -- more than 23 million baht worth of land -- wasn't made simply for people to take a stroll, have a picnic or ride a bike. With a water-retention pond, underground water-drainage system and rain garden, the park is a prime example of tackling urban climate change. More importantly, it shows how a green space can serve as more than just another pretty-but-profitless park. 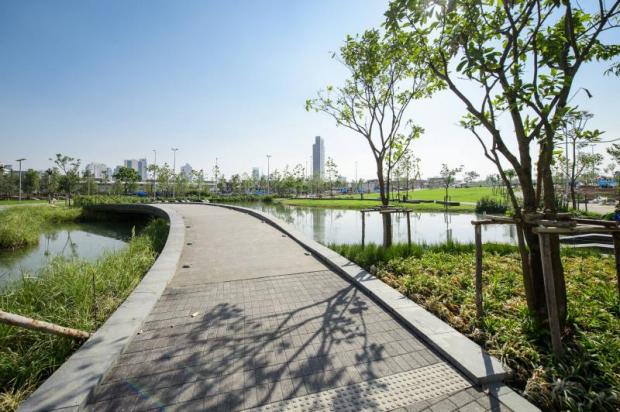 Kotchakorn Voraakom, the landscape architect behind the park, thinks it holds a bigger role, with functional, not just aesthetic, appeal. With this understanding still not prevalent for most people -- most Thais enjoy parks for groomed trees and grassy plains -- green spaces are left with little economic interest to real-estate investors and business owners.

With her team Landprocess and N7A, she came up with the park's design anticipating what Bangkok would look like in 100 years. Named the Venice of the East, flooding is more natural to Bangkok's geography than the concrete jungle it houses. Currently, it provides only 3.3m² of green space per inhabitant, compared to the 105.3m² that the more densely populated Hong Kong gives.

"We thought, for its centenary, Chula shouldn't just have a park that showcases the colour pink or its logo on it," Kotchakorn said. "We need to confront climate-change challenges, so we wanted to make it the reference point for the future."

With each monsoon season Thailand faces, Bangkok takes in a big load with its non-absorbent concrete structures. For years, each cloud of heavy rain that has poured down on buildings has instantly flown into sewage that doesn't seem to work, eventually ending up in a heavy flood and even heavier city traffic.

With Chula's park, however, the rain that falls on it stays in it. In fact, it can hold up to a million gallons of rainfall. Instead of the hard, man-made structures, the city often relies on -- dams, canals, underground tunnels, sandbag barriers and pumps, none of which permanently prevents flooding -- the park borrows nature's characteristics and puts them to use.

"[The park] helps the city by not creating a burden for it," she said.

Tawatchai Kobkaikit, director of TK Studio, runner-up for the park's design competition, too, sees parks for more than their decorative purpose. While it may be difficult to measure return on equity from the incorporation of green spaces, commercial businesses can reap various indirect benefits from them, whether in terms of finance or performance.

"If we only look at how green space could make money, it's difficult to imagine," Tawatchai said.

Aside from positive environmental impact, studies have shown that green spaces improve health and also productivity. Greener hospitals have been proven to aid the healing process of patients, while greener offices have been proven to improve the cognition of their employees. Similarly, greener districts have seen raises of property value in surrounding areas.

In addition to the growing number of shopping-mall-related projects, Tawatchai's firm is seeing more clients from other sectors interested in greener designs, from resorts and condominiums to hospitals and office buildings. People want to live where the air is clean and work where the view is pretty.

"Development of the park comes along with the increased price of land surrounding it, because everyone wants to live next to a park," Wisanu Subsompon, vice-president for Chulalongkorn University's Property and Innovation Management, said. "It's an indirect positive outcome."

Whether locals from the Samyan community, Chulalongkorn students and faculty, or residents of downtown Bangkok, the park now welcomes an estimated 1,000 visitors per day. Also hosting university events and third-party campaigns, it serves as an open venue for outdoor classrooms, marathons and other recreational activities.

While the park's trees will take four or five more years to mature, planted as infant trees rather than digging up adult trees from other places, they will grow to provide not only shade but fresher air and more biodiversity to the area.

"We benefit a lot from the park because it does social good for so many people. It is a multiplying effect," he said. "Because of that, it receives plenty of public support."

While Kotchakorn insists that businesses can integrate more plants into their smaller units -- such as vertical and rooftop gardens -- Tawatchai thinks one of the reasons for Bangkok's lack of green spaces lies in its city-mapping.

Several sustainable models already exist, though "most development is carried out by individuals and private organisations, making it hard to combine many big plots of land", he said.

Another reason, in addition to pre-existing mindsets and awareness of the environment, is the lack of governmental policy and regulations, Kotchakorn said. With no strict laws and requirements like the Environmental Impact Assessment, or rewarding incentives and tax schemes, green spaces prove more challenging for private organisations in Thailand. With more people demanding and using these parks, Bangkok can hope for more organisations to supply and build them, and vice versa.

"There are only a few who have the incentive to do it themselves, but people are starting to see the value in it. Its purpose is now being recognised out of necessity," she said. "Having a green space attracts visitors. No one wants to shop in a dry, lifeless mall." 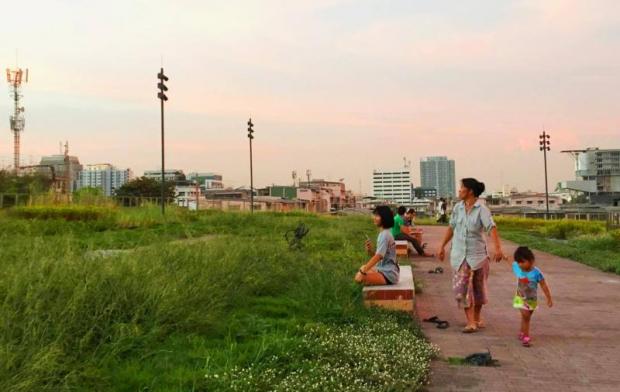 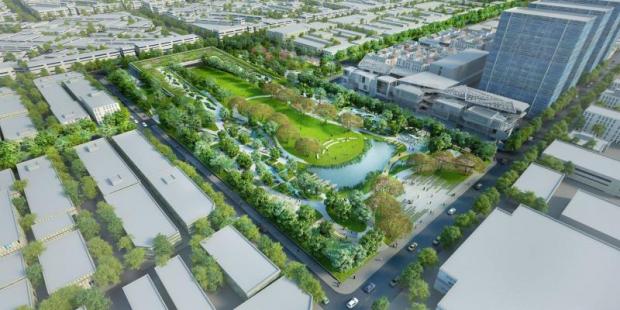