A Thai startup seeks to provide women with a safer, less expensive sanitary pad while protecting the environment in the process

Varangtip Satchatippavarn was aware of the stigma surrounding menstruation since her first period. Period stigma is a misconception that regards women's monthly bleeding as dirty and disgraceful -- a taboo. Whenever Varangtip purchased sanitary napkins, the sellers would put them in double bags, so that other people could not see them. Varangtip also experienced allergic reactions to some sanitary pads, so she changed brands several times. To solve her allergy issue, the 26-year-old eventually launched her own sanitary napkin brand, Ira Concept, which is organic and 99% biodegradable.

"When I had my first period, I had continuous bleeding for three months. I did not know that this was abnormal until my mother found out and took me to see an obstetrician. Due to an allergy to the sanitary napkins, I also developed a rash. I started to look through those product packages to identify their ingredients, but not much information was available on the packages. I conducted research and found many brands, which claimed their products to be 100% organic and biodegradable, still contained nonbiodegradable materials. For Ira Concept, glue is the only nonbiodegradable ingredient and we're honest about it," said Varangtip.

The idea of Ira Concept did not come overnight. It was a fruit of her experiences in various workplaces, both good and bad. After graduating with a biological sciences degree from Durham University in the UK, Varangtip worked for the government's National Innovation Agency, which assists startups and entrepreneurs. She later moved to work at a venture capital firm with headquarters in the US's Silicon Valley. The experience provided her knowledge about tech startups, but she also experienced racism and workplace sexual harassment.

Varangtip later quit the job and decided to create Ira Concept, aiming to balance sustainability and convenience. According to National Geographic, a woman over her lifetime will use between 5,000 to 15,000 sanitary pads and tampons.

Menstrual Health Alliance India reported that a sanitary pad that contains nonbiodegradable materials will take more than 500 years to decompose, harming the environment in the process.

"Zero waste has been a trend since the baby dugong Mariam died with huge amount of plastic in her stomach. Menstrual cups and washable cloth pads are alternatives for people who are concerned about the environment, but I believe that Asian women have a stigma about inserting anything inside our bodies," she said. 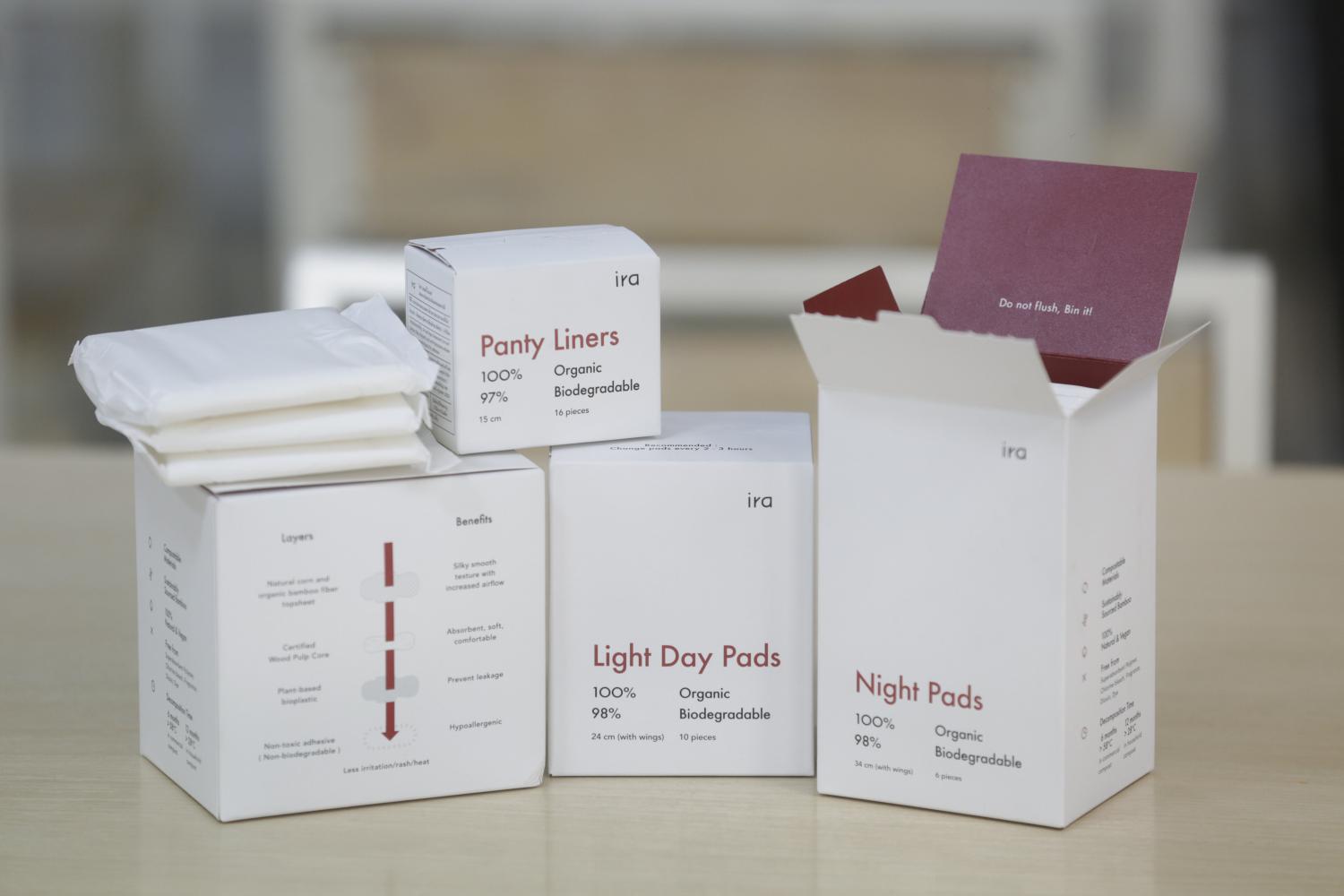 The red colour inside the box of Ira Concept is what a normal period should look like.

"I thought we should have something in between these alternatives, something that doesn't force women to change their behaviour."

Since Varangtip believes that "period rights are human rights", her product name expresses her belief in equality and environmental consciousness. Ira is a unisex name, meaning "watchful" in Hebrew and "earth" in Sanskrit. Unlike many sanitary pad brands, Ira does not contain chemicals or perfume, with bamboo being its main material.

"Ira is a unisex name because our brand has no discrimination against anyone. This is an inclusive brand. We believe not all women have a uterus, and not all people with a uterus are women. We chose bamboo as our main material because it is sustainable and can fully grow in only three or four months. Bamboo requires a lot less water than cotton and doesn't need any pesticides. To make the product biodegradable, we had to get rid of superabsorbent polymers (SAP) which many brands use because this nondegradable material absorbs and collects blood in pads," explained Varangtip.

Normally, women are recommended to change pads three to four times a day, but women who use Ira pads have to change pads more often, which concerned Varangtip a lot.

"Feedback from customers varied. Without SAP, we recommend customers change their pads every two to three hours. We should not wear pads for long hours anyway since it can lead to infection. Even though customers have to change pads often, many customers feel comfortable with our pads. Some said Ira made them realise they had allergic reactions and rashes from other brands," she said.

Ira's packaging is different from major sanitary napkin brands that dominate the market. While other brands feature multicoloured images on the packaging, Ira appears in minimalist design in a plain white paper box with red inside.

"When we designed the package, I wanted one that anyone can carry without putting it in double bags," she said. "Packaging must provide information that is honest and transparent, so nothing distracts customers from the message. Before launching, I was frustrated because of the negative feedback to the mockup. Some comments said it did not look like the sanitary napkin packaging that they were used to.

"However, after its launching, lots of customers liked it. I realised that we cannot please everyone. The red colour inside the box was chosen by an obstetrician who said this is how the colour of a normal period should look like. I hope customers notice the colour of their menstruations." 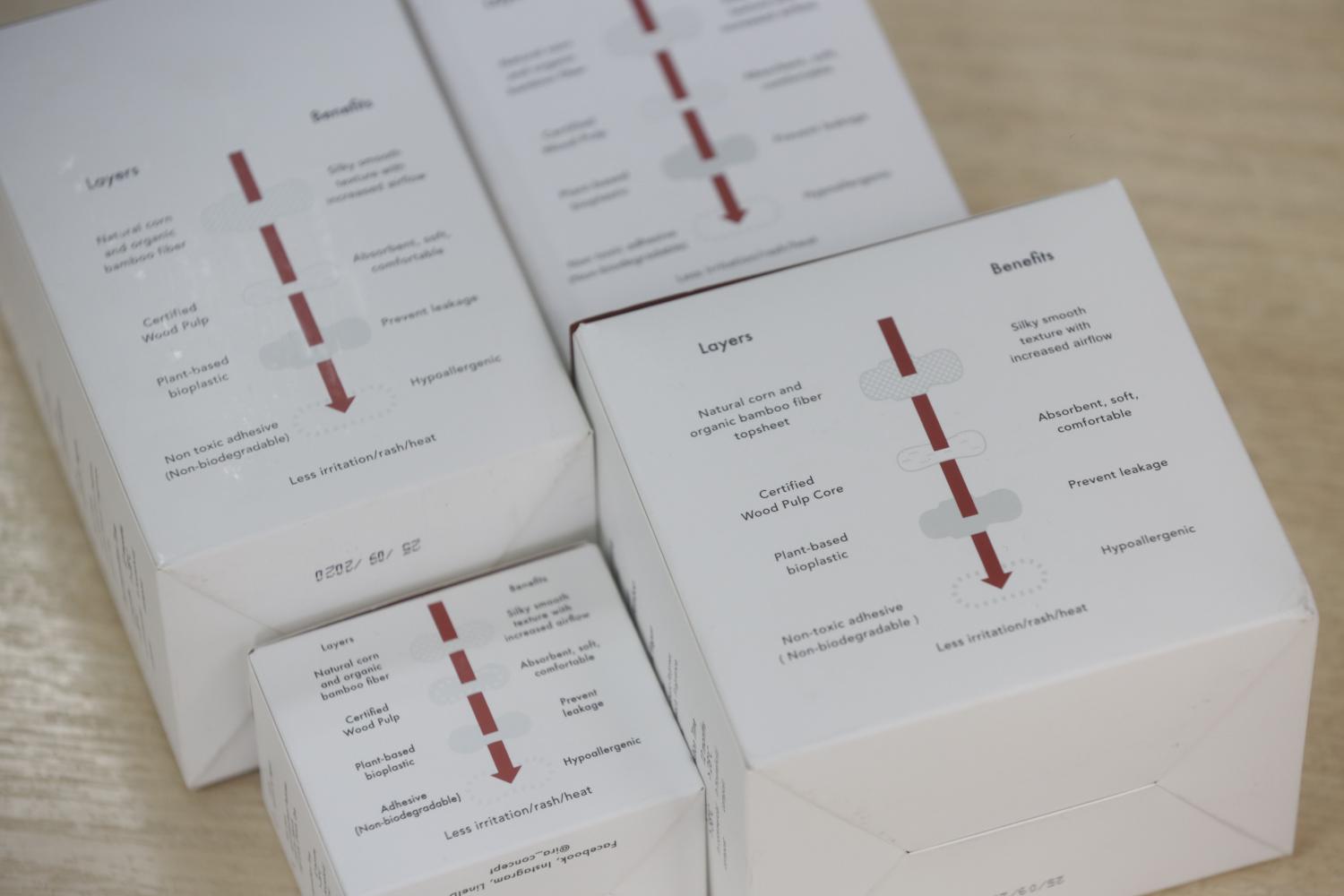 Ira has minimalist design with a clear message.

In addition to its environmentally safe mission, Ira Concept was also created to destroy period stigma. While working on marketing the product, Varangtip started a social movement. She approached educational institutions and other organisations to provide sanitary napkins to students and staff. The Ira founder said that a policy concerning menstruation could increase productivity because women would not have to be frustrated or waste time finding pads when they experience unexpected menstruation. She talked to representatives in some institutions, but it seems like people need more time to understand about the necessity of sanitary pads.

"We do not want them to put a sanitary napkin vending machine in their establishments. We propose them to purchase our products at a special price, so that they can distribute these sanitary napkins for free to their female staff and students when needed. We spoke to some officers at state universities. It was interesting to find that female officers resisted our proposal more than the male staff. They said there was no budget for sanitary napkins. We suggested that we could provide our products to the universities and they can conduct research about menstrual policy, but they were not ready to embrace it. However, at Kasetsart University Laboratory School, students gathered money to purchase our product for female students. They are aware of menstrual hygiene and the necessity of sanitary napkins," said Varangtip.

Varangtip wants to propose to the Thai government to use the 7% value-added tax from sanitary products to establish a fund to purchase menstrual products for poor students and women.

"In 2018, Malaysia started a tax exemption for sanitary napkins which is referred to as pink tax. I believe it can happen in Thailand, but it will take time," she said.