The literary reverberations of esteemed writer Wanna Sawatsi and her husband and editor, Suchart, are felt worldwide

If you know the name “Sidaoruang”, you might already be reaching middle age. If you are younger or non-Thai, knowing the name probably means you are passionate about local literature, especially Wannakam Puea Chevit (Literature For Life), a genre of Thai books conceived in the 1970s that addresses the plight of farmers, social injustice and class struggle in Thai society. 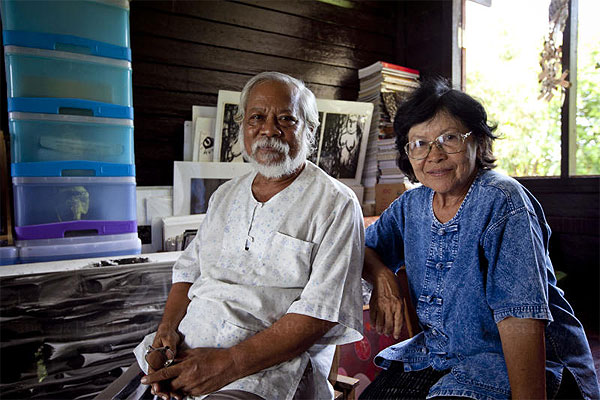 Sidaoruang is the nom de plume of Wanna Sawatsi, who has famously written myriad stories that address the themes of Wannakam Puea Chevit. Her works have been compared to those of Russian writer Maxim Gorky. She has received numerous literary awards and recognition, locally and abroad.

And age does not slow her down. Earlier this month, at 73, she received the Sriburapha Award, recognising excellence in Thai journalism, writing and the arts, for her almost four decades of contribution to social change.

But the doyenne of Thai literature does not seem to dwell much on the past. Instead, she focuses on her work and ever-changing Thailand, as Wannakam Puea Chevit seems to be losing its steam as a new generation of writers and readers explore different content.

“People always put labels on and stereotype my work in narrow terms. But the fact is things always change,” Wanna said at her home in the Rangsit area, where she lives with her husband and editor Suchart Sawatsi. “My friends joke and say that’s why I need to make poor people victims and rich people villains. In reality, poor people do not have to be right and rich people do not have to be the villains.”

Wanna’s becoming a writer is a story in itself. Born to a poor family in Phitsanulok province, Wanna quit school in Prathom 4 and came to work in Bangkok. She was the epitome of blue collar, working in a glass factory and as a maid and waitress. But the people who knew her remember Wanna as a girl with an armful of books, one who always read in her free time.

Despite being poor, her home was full of books. Her father regularly brought them into the house and Wanna grew up reading traditional Thai poems to her grandmother. She had an enormous love for knowledge and education, working overtime to save money for typing courses, despite the fact that she didn’t use the skill in any of her jobs. 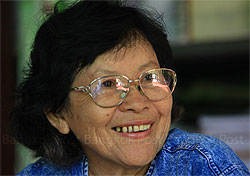 Wanna also used her savings to buy an English phrase book, so she could teach herself the language. She was constantly trying new things, attending seminars and reading newspapers. Bangkok in the 70s was hotbed for political change, so she began to attend political talks held by university students.

In 1975, she met Suchart, then a university student and political activist who gave a speech at a political forum near the restaurant in which Wanna worked. Later he bought her a book of free verse poetry and a copy of Veerachone Asean, a novel about freedom fighters, as a gift. Soon the couple fell in love, and Suchart moved in to her ramshackle rented room in a factory worker community in the Saphan Khwai area.

“I did not know that she loved to write or had the potential to become a writer,” he said. “I just knew that Wanna was smitten when she saw books and I am a guy who likes to give books to girls. But for me, it was purely about attraction when we first met. I wanted to live with someone, and that someone turned out to be her. I told her that our relationship would be non-committal and that I may leave one day. But it was me who ended up asking to move in with her.”

“Her reading list was exceptional. First I saw her reading a book by Supoj Dantrakul about the assassination of King Rama VIII. Then I found her reading a translated version of Uncle Tom’s Cabin. Sometimes I would see her writing a poem, even though she didn’t know it was one. She had rhyme and words inside her. She is a natural and has a way with words and writing.”

The relationship transformed into a lifelong relationship. Wanna became Suchart’s assistant, typing manuscripts and keeping track of his work. When she started writing, Suchart created the pen name Sidaoruang.

“I edited her work and created her pen name, as I did for many of the writers I discovered,” he said.

Being the wife of a high-profile editor, though, had its downsides. Wanna had to disguise her real identity for years in order to build an independent reputation. She wrote and wrote, developing her own voice and style. Eventually her work began to be published in magazines.

Wanna is now recognised as a writer in her own right. She has written hundreds of short stories, which have been collected in eight anthologies, seven novels, four poetry books, six books of essays and columns, six non-fiction titles and various book reviews and plays. She also has translated almost 20 children’s books from English into Thai, in addition to writing her own.

Her works have been translated in English, French, German, Danish, Portuguese and Japanese. Her work is the subject of student theses and Thai literature courses. Western scholars read her books to understand Thailand and its society.

Dr Rachel Harrison of the School of Oriental and African Studies at the University of London translated Wanna’s first short story collection, Kaew Yode Deow, about the life of factory workers, into English in 1994 under the title A Drop Of Glass And Other Stories. In 2007, her short story Matsi, a notorious work focusing on sexism in Thai culture, was translated into Portuguese and was locally adapted into plays.

Susan Kepner, a professor who teaches Southeast Asian culture and literature and Thai language courses at the of University of California, Berkeley, translated her short story collection, Chao Yak, under the title Married To The Demon King: Sri Daoruang And Her Demon Folk. Her work has also been analysed and interpreted in terms of politics, feminism and culture.

Wanna’s work has transformed over the course of her career in both content and form. Her early works almost solely address social injustice, but her later works are more diverse. She addresses simple issues and writes about things around her — drinking with friends, gardens, her surroundings and the lives of ordinary people.

“As an editor and critic, I like her recent work. She finally breaks from her comfort zone of Wannakam Puea Chevit. She writes about new things with a new narrative style,” Suchart said.

But their relationship is much more than what the reserved Wanna writes or what the chatty Suchart edits. They’re a couple bonded by more than books, even though love of the written word acts as a glue that helps keep the pair bonded.

“I would say I am very lucky guy,” Suchart said. “You may say that [French writer] Antoine de Saint-Exupéry is damn right when he says, ‘Love does not consist in gazing at each other, but in looking outward together in the same direction’.”