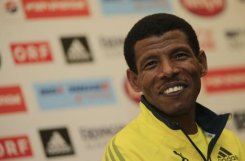 Ethiopia's Haile Gebrselassie addresses a news conference ahead of the 30th Vienna City Marathon, in Vienna on April 12, 2013. The long distance star has won his third consecutive Vienna half marathon, timing one hour one minute and 14 seconds.

Gebrselassie, a double Olympic 10,000 metres champion who turns 40 next week, took control of the race at the midway point.

After crossing the line ahead of Kenya's Hosea Kipkemboi (1hr02.21) and Ethiopian Mekuant Ayenew (1hr02.21) he reflected: "It was a magnificent festival, with a golden public who didn't stop encouraging me."

In March, Gebrselassie stated he was still in love with running and had no intention of retiring.

"As long as I enjoy it so much I will keep running and I don't know how and when this will finish," he said.

He is scheduled to take part in a race in Bern on May 18 before defending his Great Manchester 10km Run title on May 26.

His Vienna performance was outside his two previous winning times in 2011 and 2012, and well short of his best ever half marathon mark of 58 minutes 55 seconds set in Phoenix in 2006.